About a week ago, I was looking for a ride to Hadley, MA and was trying to get some of my teammates to go — that wasn’t happening. I was trying to persuade Zach Tartell into coming, when I said this:

After giving up hope on The EPIC Syndicate, I found a ride to the event with Nick Wowelko (Nickrit2000) and Jason Wallace (Sacaruse). There was another car from Syracuse also going — Hollywood (A legend), Geoff Smelski (Konsultant), and Tariq White (Spiderfreak). The day of the event came and I needed to wake up at 7:00 AM on a Saturday! I quickly got ready and ate some left over pizza (best breakfast ever) and our car was off to Hadley, MA! We arrived early and played some “Skittles” (a highlander, peasant format, where you must play all five colors split evenly) to pass the time. Other players in the event kept on asking if that’s what we were playing, the response was “Yeah, it’s a five-color aggro-combo-control deck with a very favorable Dreadstill match-up.”

Library of Alexandria Event at Off the Wall Games

Round One – Lucas with Quinn, the Mighty Eskimo

After this round, I was able to meet Jaynel and JanValentine00! Very cool guys and we did some trading — I got a Japanese [[Undiscovered Paradise]], which I was pretty excited about. It felt cool, I was asked to sign a [[Tendrils of Agony]] and an [[Empty the Warrens]].

Round Two – Justin (Sunshine) with Dredge

Justin wins the die roll and then plays [[Cabal Therapy]] targeting themselves. This is good news as I kept a no-land hand, but if I drew a black card, blue card, or a land I was going to win. I draw a [[Gemstone Mine]] and then play it to cast [[Dark Ritual]] into [[Infernal Contract]]. I draw a few less than desirable cards off of it. I then play out a pair of [[Chrome Mox]], remove a [[Simian Spirit Guide]], cast [[Lion’s Eye Diamond]], and then [[Burning Wish]] for [[Empty the Warrens]] for 14 [[Goblin Token]]s. Justin’s Dredges aren’t very good and it’s enough to squeak out a win.

Round Three – Mike Keller (A Legend) with RB Painter

I win the die roll. I knew I was fighting an uphill battle, especially after Mike plays a pair of [[Thoughtseize]] on key cards. I end up resolving a [[Diminishing Returns]], into a pretty bad hand. Mike plays three discards spells into a [[Tombstalker]] that ends up killing me.

Round Four – Dylan with Mossnaught

Dylan wins the die roll. We play land go for a few turns, until the third turn when [[Phyrexian Dreadnaught]] breaks the silence. I cast an [[Orim’s Chant]] in response, [[Daze]] from Dylan, I remove [[Simian Spirit Guide]] and pay. On my turn, I cast [[Diminishing Returns]] into a decent hand and then decided to go for it. The issue is, my hand creates exactly four mana and has [[Tendrils of Agony]], if there is a [[Daze]] on [[Dark Ritual]], we’re in trouble. It turns out there was one and I eventually lose to a [[Tarmogoyf]] backed by [[Pernicious Deed]].

I have a second turn [[Vexing Shusher]] while having this in hand: [[Orim’s Chant]], [[Dark Ritual]], [[Lion’s Eye Diamond]], [[Ill-Gotten Gains]], [[Infernal Tutor]], and [[Simian Spirit Guide]]. The big thing is I can’t win with both storm engines in hand. I need to draw more acceleration or a [[Brainstorm]]. Dylan plays a [[Phyrexian Dreadnaught]] and attacks on the following turn. I’m praying to draw another [[Dark Ritual]], [[Lion’s Eye Diamond]], or [[Brainstorm]]. I draw [[Brainstorm]] and attempt to win while fearing [[Stifle]] in the opponent’s hand, I’m lucky enough to get there.

Round Five – Rich Meyst with Goblins

Rich opens with with [[Rishadan Port]], [[AEther Vial]], and [[Chalice of the Void]]. A second [[Chalice of the Void]] on one comes down. I play another [[City of Brass]] and then pass. [[Goblin Warchief]] hits the table and then [[AEther Vial]] out a [[Goblin Piledriver]]. Attacks. I tap my deck and say, “please be there!” And it was! I drew the [[Shattering Spree]]. I remove [[Simian Spirit Guide]] and kill both copies of [[Chalice of the Void]]. Another brutal attack step from Rich. I [[Empty the Warrens]] for 10 [[Goblin Token]]s to create a stalemate. I use [[Infernal Tutor]] for my one copy of [[Orim’s Chant]] to use as a [[Time Walk]]. The turn after, Rich plays another [[Chalice of the Void]] at one. I swing all out and then [[Tendrils of Agony]] Rich down to 2 life. The math says that I’m going to win if Rich attacks out or stays back to block on the next turn cycle. Rich’s draw-step changes it all with a [[Goblin Sharpshooter]].

We both Mulligan. I don’t remember much of this game. I [[Diminishing Returns]] into a pair of [[Infernal Contract]] and a bunch of acceleration. I cast [[Infernal Contract]] into [[Simian Spirit Guide]], [[Dark Ritual]], [[Chrome Mox]], and [[Burning Wish]]. I end up casting [[Tendrils of Agony]] for 26 life.

Justin doesn’t mulligan into [[Chalice of the Void]], but instead, keeps a fast hand. A first turn [[Putrid Imp]]. I play a [[Ponder]]. Justin discards most of their hand and then casts [[Breakthrough]], but it falls short. I take my turn and play a pair of [[Lion’s Eye Diamond]], [[Lotus Petal]], and [[Infernal Tutor]] for [[Ill-Gotten Gains]].

I keep a hand that makes 10 [[Goblin Token]]s on the play, hoping that its enough. It is! 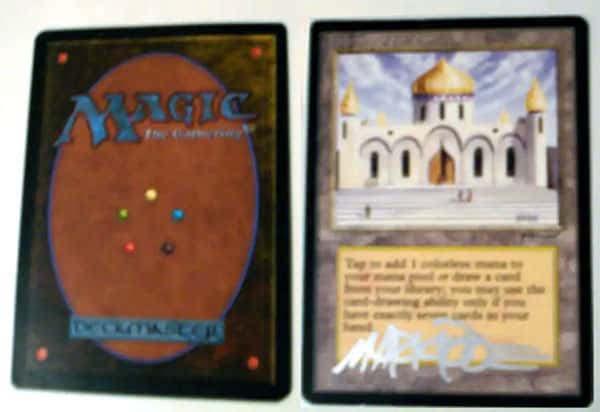 I am the proud winner of a Library of Alexandria! Sorry, the picture is kind of bad — but I now know how many books are in a Library.