We’re back with the mailbox, here are some more Q&A’s:

I’ve been trying to find out whether ANT or TES is better for my metagame. This is always a big question and there are up’s and down’s to both but I’m not falling to any conclusion. So, I would like to hear from you about the percentages about how fast TES actually is. Since when discussing the decks, speed is often the discussion point between TES and ANT. Also, it feels like to be 2 sides and most of them aren’t going to argue with real statistics nor they are willing to change their opinions…

This was actually asked months ago, but I haven’t published a mailbox in some time – I apologize for the delay. I believe these two resources can help you make an educated decision: TES vs ANT – 2016 | TES Match Results

In the stats tab you’ll see Average Combo Turn and Combo Turn Percentages (These are not the odds of comboing on these turns, these are results based on real games versus real opponents – not goldfishing numbers). To save you some trouble, you can find the results of this below:

The ANT Data was taken from a good friend who I consider to be an above average ANT player who uses my spreadsheet template as a resource (Download). One downside to my spreadsheet is that anything turn four or higher is averaged in at 4, meaning, the ANT numbers are skewed to be a little lower (I’d guess they’re actually in the 3.5 range).

How has Defense Grid been?

This question has been asked a few times in the TES Facebook group as well, but I had answered it in my Grand Prix: Las Vegas report.

Defense Grid has been relatively good for me, it’s fantastic against the slower blue control decks in the format and decent against Delver of Secrets decks that aren’t heavy on discard. A pseudo colorless replacement for Xantid Swarm that makes games very awkward for the opponent. If the opponent has enough mana to interact with a single spell, you can generally power through it, but even if you can’t – it creates situations where your opponents aren’t casting spells on their turn to hold open mana which is good for you.

I’m not a big storm player, but… do you see any value in the new Magus of the Will? It’s clearly mana intensive and somewhat slow, but a Yawgmoth’s Will still seems pretty powerful. Is it just not necessary for the deck/not worth contorting yourself for?

You explained the reasons yourself, too much of a time investment while being very costly. Also, it only works if it doesn’t get hit by Abrupt Decay / Lightning Bolt or even the Swords to Plowshares that are left in for Xantid Swarm.

I’d really be interested in hearing about your streaming schedule, I caught the one the other day and would like to watch more!

There really isn’t one. I stream sporadically and on short notice, but when I do, I typically post it in the TES Facebook group. My stream on Monday was because I had the day off of work due to the holiday, I wouldn’t expect too many week-day streams from me.

In the list you’ve been playing online the last few weeks you’ve been running a pair of Surgical Extractions over Massacre and Meltdown, why? Are they good? Should I be playing them?

I like to try out different things, if I was going to recommend a deck list to someone to play at an event tomorrow, I would tell them to play list from GP: Vegas.

That said, I’ve seen an increase in my win percentage since cutting those two cards for Surgical Extraction (65.66% without | 69.89% with). Having the ability to fight other unfair decks in a way that isn’t just “more discard” is extremely helpful and is likely the cause of the increased win percentage. If you read my report from Las Vegas, I used Meltdown once the entire event (to kill Chalice of the Void on 1 and a Trinisphere). Even then, I lost the game anyway. Meltdown is just a card I don’t use very often, making me question if it’s even worthwhile. In those sorts of match-ups, I would rather just focus on mulliganing aggressively and being fast. Similarly, I share the same approach with Death & Taxes.

With the list I am currently playing online (v1.7 in my spreadsheet) I am 12-3 against Death & Taxes and 29-7 overall (between all spreadsheet deck versions). I believe it’s perfectly acceptable to take a card out of the sideboard in a very favorable match-up (80.56% win-rate) in order to improve difficult match-ups.

It’s ultimately up to you about which version you’d like to play, but I don’t believe you can go wrong either way.

You’ve been on a real hot streak the last week, you posted about having four 5-0’s on mtgo in the group. Any real reason why? I’m guessing a metagame shift.

Honestly, I think it’s that I’ve been getting better with mulligans and playing a very high number of games has helped me accomplish this. I’ve been more aggressive when I need to be (I don’t mulligan as often against blue-based decks) and a keeping a few risk/reward hands in speed based match-ups. Looking at the data in the spreadsheet, you can see this.

You can see that my mulligans are way up as is my win percentage and my average combo turn is the lowest it’s been with a list with a reasonable number of matches. I believe these are all direct correlations.

As an ANT player I’m very skeptical of how good Telemin Performance actually is.

This isn’t really a question. But I suppose I’ll try to explain some things. The first being that it’s really only good against other unfair decks (Storm, Sneak & Show, Lands, and Reanimator variants), which you could probably guess. When you look at it from an analytical point of view (using v1.7), I use Past in Flames 8.59% of the time and Telemin Performance 5.09%. Neither of these are incredibly high, but Telemin Performance is great in some match-ups where the other options are pretty bad. When facing Lands, Crop Rotation shuts off Past in Flames, Empty the Warrens and Dark Petition (for the most part). I’ve also seen an increase in usage of Telemin Performance when paired with Surgical Extraction, the knowledge you gain from knowing how an opponent sideboarded is incredible. 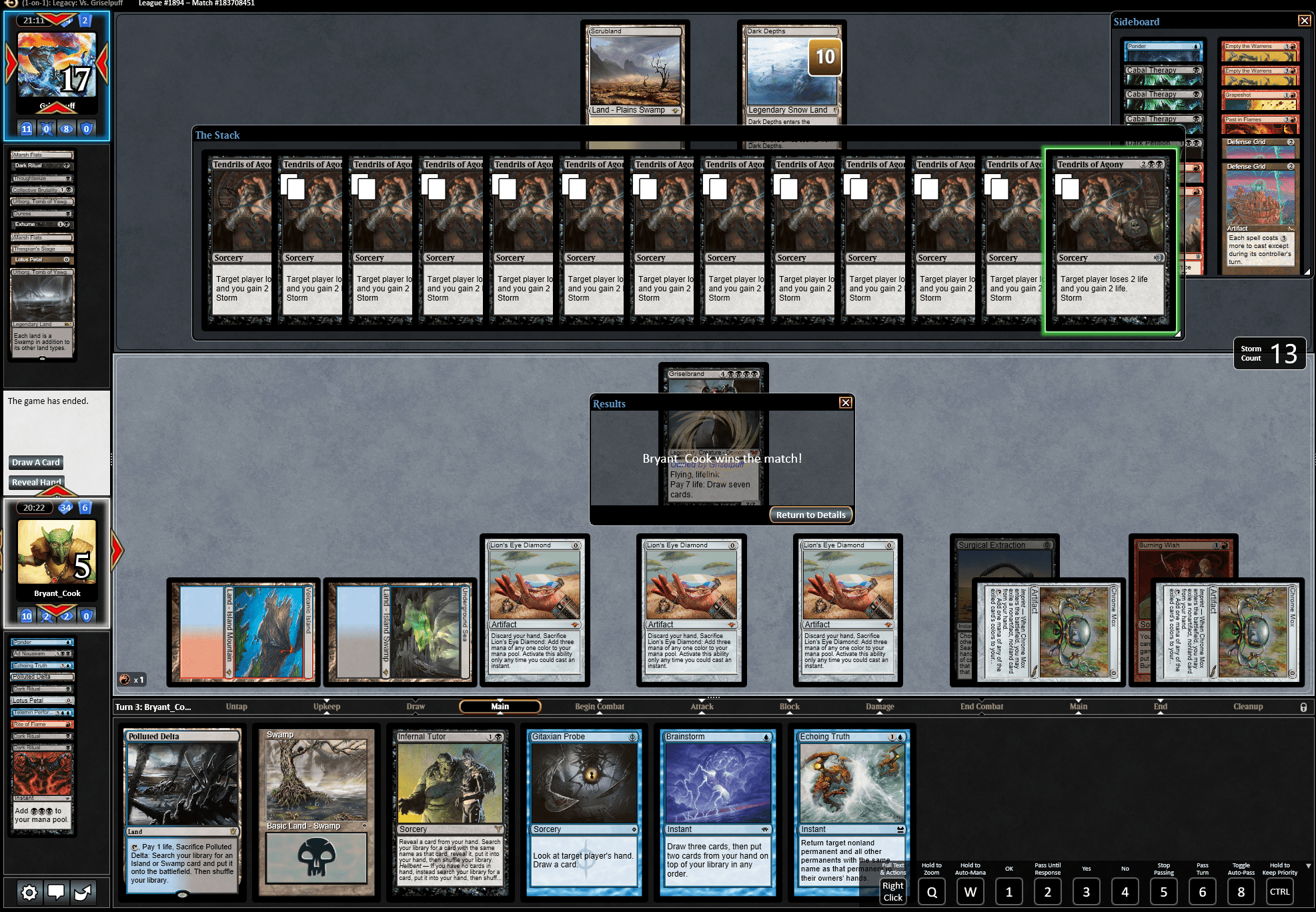 We’ve seen a massive convergence of card choices between ANT and TES (TES adopting discard over silences and, fetch/dual manabase, ANT adopting Empty and Chrome Mox) Do you think that over time eventually the two decks will merge and become functionally identical, or will Burning Wish always be the dividing line between archetypes?

With the current card pool, I don’t see it happening. I could see it happening with the printing of another playable “ritual” or “tutor” effect. I touched on this subject briefly at the end of my Vegas report.

Do you see yourself adding any more writers to the website? You write a lot, but the other people aren’t very frequent.

I’d be open to the idea. Keep in mind, theepicstorm.com is non-profit, it’s tough to ask people to write all the time when they’re not receiving compensation. But also, most of us have full-time jobs, are in school or even have families – it’s difficult to make time for Magic: the Gathering content. Especially for a format that doesn’t receive a whole lot of change or support from the people upstairs.

If anyone wanted to submit a writing sample, I’d read it and consider them, but there are no guarantees.

If you had to create the perfect card to improve TES, what would it be?
A better cantrip? Better ritual? Another wish target? A finisher? Another 0cc Mana source?

I don’t know if this is the “perfect” card, but it would be great to have. What storm decks lack are good answers to cards like Sphere of Resistance, Thorn of Amethyst, and Trinisphere. This card is perfectly printable (without being degenerate).

A card I’ve also had in the back of my head that I’ve wanted printed for some time would be:

Against a known lands opponent would you ever go for goblins even if it was a large (say 14-18) amount, or do you wait for the Ad Nauseam kill every time to stay safe from Tabernacle at Pendrell Vale?

I avoid Goblins at all costs against Lands, for the exact reason you started. They play 8 tutor effects for Tabernacle and then cards like Life from the Loam that help them find it, the risk is so high.

If you’re interested in asking a question, use the contact form below with the subject line of “TES Mailbox” to submit your question!