4c Loam is an aggro-control deck capable of both board control and an aggressive clock. It is centered around using lands and Life from the Loam, hence the name of the deck. Because of this, it is considered one of the midrange decks in Legacy being able to play a longer game, but also play many aggressive cards like Knight of the Reliquary, also playing into their lands strategy. While typically the Lands matchup is pretty good for storm decks, this matchup plays out differently because 4c Loam has cards like maindeck Gaddock Teeg, Liliana of the Veil, and Chalice of the Void as part of their control plan. With the banning of Deathrite Shaman this deck has popped up a little more than in the past, and we need to understand this matchup and how it plays out differently, because of its unique angles of attack.

How does 4c Loam matchup against TES?

Chalice of the Void – Part of their permanent disruptive suite is Chalice of the Void. Some of the best cards in legacy are 1 mana, and are blue cards. 4c Loam plays very few 1 mana spells and no blue cards, so by playing a Chalice of the Void on 1 it shuts down many decks completely and slows down several decks in legacy by preventing them from casting their 1 mana spells. For us this card is a nightmare since TES has such a low average converted mana cost. Whether they cast this for x=1 or x=0 is hard to beat. We will often need a discard spell, a bounce spell, or a unique hand in order to try to win through this.

Gaddock Teeg, Green Sun’s Zenith – 4c Loam plays maindeck Gaddock Teeg, and can play up to four copies of Green Sun’s Zenith, so that’s a nightmare for us since two out of the three of our win conditions are four mana, Empty the Warrens and Tendrils of Agony. This forces us to win with a Grapeshot or use Grapeshot to kill it, and then try to combo off. We do not have access to any answers to a resolved Gaddock Teeg and that will require us to use Burning Wish. Post board we get access to some more answers to bring in, but game 1 this is one of their best disruptive ways to beat us.

Wasteland – Like most Life from the Loam decks it is paired with Wasteland. This is a combination of cards shouldn’t be too new to playing against unless you haven’t been playing legacy very long. Because 4c Loam doesn’t have too many ways to disrupt us in the first game we really should be fetching out basics to not play into Wasteland. Deciding when you can afford to fetch basics compared to when you can’t, and may have to risk losing to Wasteland is one that takes lots of practice since there are no hard set rules.

Thalia, Guardian of Thraben, Toxic Deluge – Because this matchup tends to favor Storm 4c Loam usually plays a couple of copies of Thalia, Guardian of Thraben in the sideboard to help them out. Just like when we play against any other deck with Thalia, Guardian of Thraben it is very hard to beat it when it’s on the battlefield. Our best bet is to strip it from their hand or combo off before it comes into play. Worse case scenario we rely on one of our bounce spells to try to beat it, but ultimately we need to try to win fast. They also play a couple of Toxic Deluge in the 75, and will more than likely bring them all in after game 1 when they see are on TES. I wouldn’t completely dismiss trying to win with Empty the Warrens, because they only play a couple of copies and there are no cantrips or tutors to help them find it. Just something to be mindful that Empty the Warrens isn’t always in the clear because they definitely have sweepers somewhere in their deck.

4c Loam attacks and tries to prevent us from winning on one primary axis, with permanents. They may have a couple of discard spells, but pretty much just with permanents, and they play no counterspells. The permanents that they do play have such a variety of how they prevent us from winning like cards Thalia, Guardian of Thraben, Gaddock Teeg, Wasteland, and Chalice of the Void. All of those are completely different and that makes it hard for us to try to play around, and beat one of them preemptively through the way we sculpt our hand. We are going to need our discard spells as a catch-all to be able to take whatever they have and give us insight on how quickly we need to combo off or to sculpt a hand around their known hate pieces. Discard with the combination of bounce spells is how we need to approach answering their permanents. Playing that type of game is often the hard route, but sometimes our hand is not fast enough to combo off under their lock pieces. An easier way to beat them is just be having a very fast hand that can combo off on turn one or two. We need to play and make mulligan decisions that either have a quick kill or an answer to their permanents. If a hand has neither and is slow then it’s probably a mulligan. When evaluating speeds of hand consider just because we can make Empty the Warrens that there’s a chance of a sweeper, but those odds are low since they have so few with no cantrips, but something to keep in mind.

This is a pretty easy sideboard swap by removing some cantrips and adding in some ways to interact with permanents. The opponent is only trying to fight us with a variety of permanents and the more they have in play the harder it will be to win the game. This means we need to focus on winning quickly before they get into play or be able to bounce/destroy a permanent, and then go ahead to combo off. Having a hand full of cantrips and interaction is just not good enough here. We need to have a fast hand with the ability to interact just in case, and this sideboard plan helps make that happen.

I am a couple turns into the first game against an unknown matchup, and my opponent had an amazing start against me with a turn 2 Chalice of the Void on 1. This is traditionally pretty bad news for a storm player, but luckily I only 1 card in my hand with 1 cmc. My hand is also not very good though as my first couple draw steps were redundant tutors. 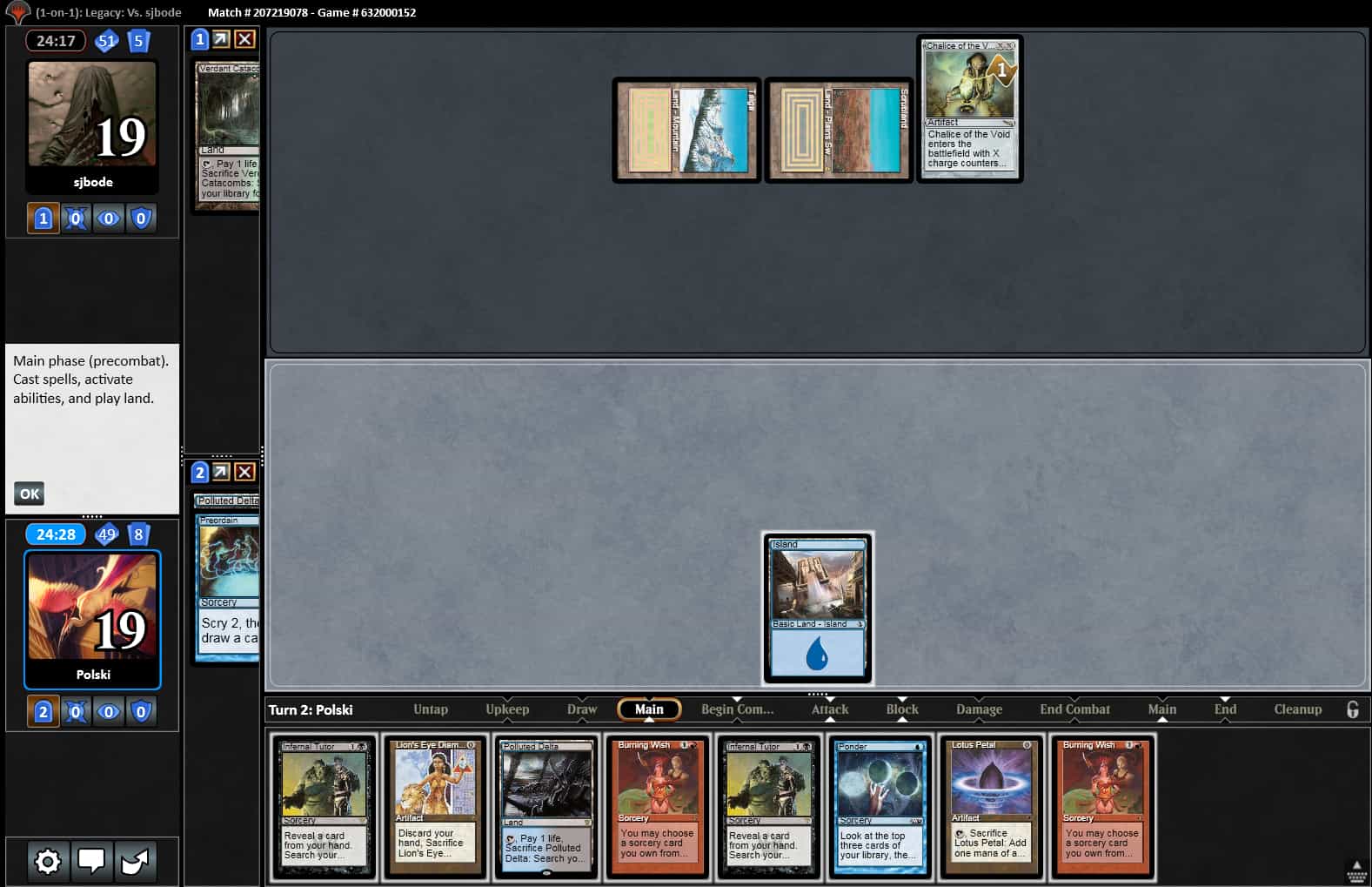 I then fetch out my second basic because I can afford to play around a potential Wasteland, and then use one of my copies of Infernal Tutor to get another Lion’s Eye Diamond to be able to get enough mana to combo off in a future turn. On my opponent’s turn he casts a Green Sun’s Zenith for x=2 and puts a Gaddock Teeg into play. ouch…getting pretty tough. When he passes back I draw a Chrome Mox and then cast it to imprint one of my copies of Burning Wish as a red source to cast my other Burning Wish to grab the Grapeshot. I immediately cast it along with the Lotus Petal to get rid of the Gaddock Teeg with the plan to combo off on the following turn: 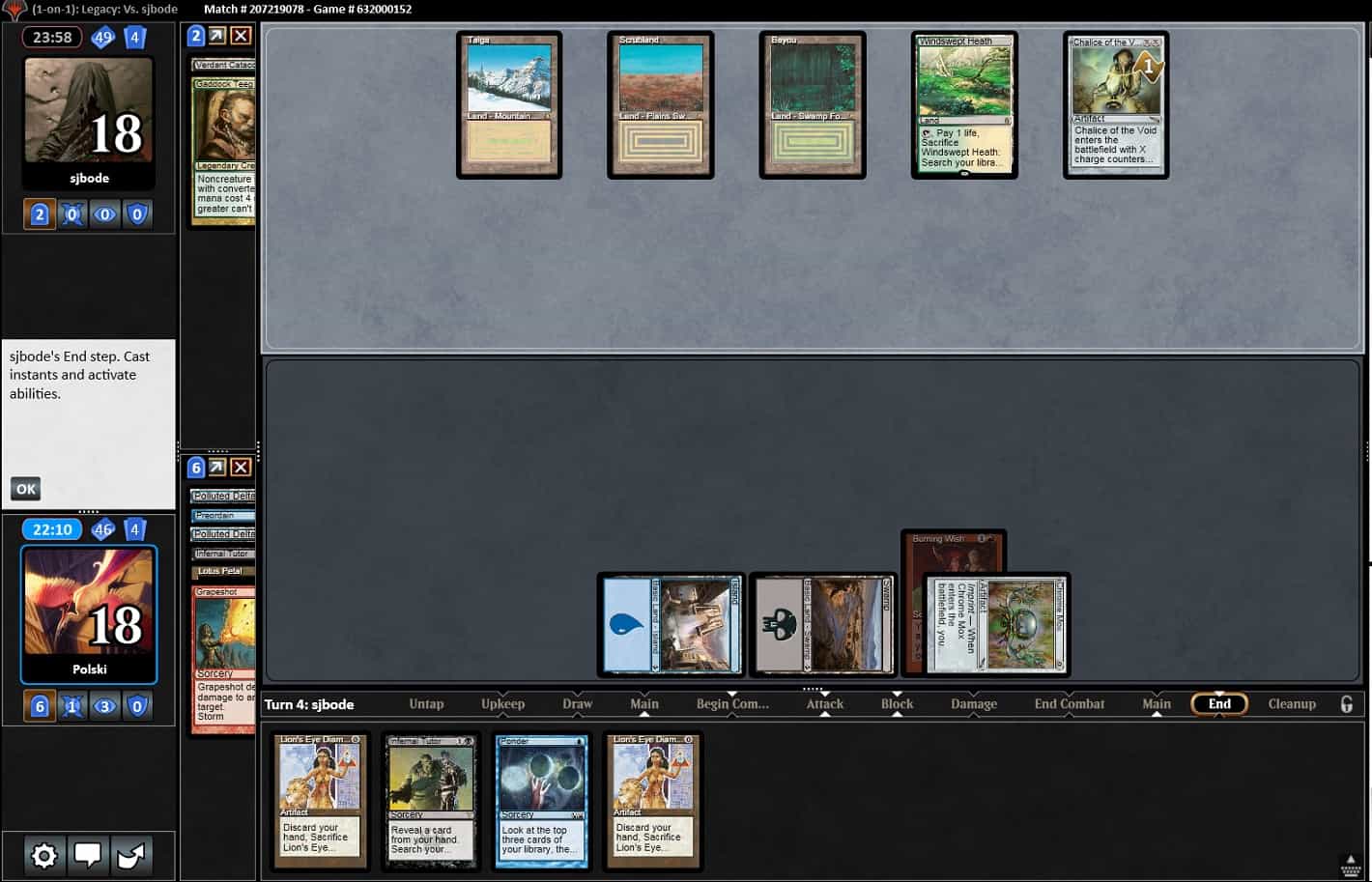 On my opponents fourth turn he just makes his land drop and passes the turn back to me, and I draw a Dark Ritual. Another one drop to be countered. My opponent has four cards in hand, but isn’t casting anything. That worries me, but I know I need to hurry up before another lock piece comes down, so I decide to just go for it this turn and play out both of my Lion’s Eye Diamond and then cast my tutor floating 3R 3B and grab a Burning Wish for an Empty the Warrens with storm 5.

I had the option to also Ad Nauseam here with 1 color floating, but I figured that had a lower chance of winning on that turn with the Chalice of the Void in play, 4 artifacts and 4 tutors already been used. This opens myself up to a wrath of course, but I was banking on the fact they probably only have 0-1 in their maindeck and I liked those odds better than Ad Nauseam, but I don’t think it’s a clear cut decision. 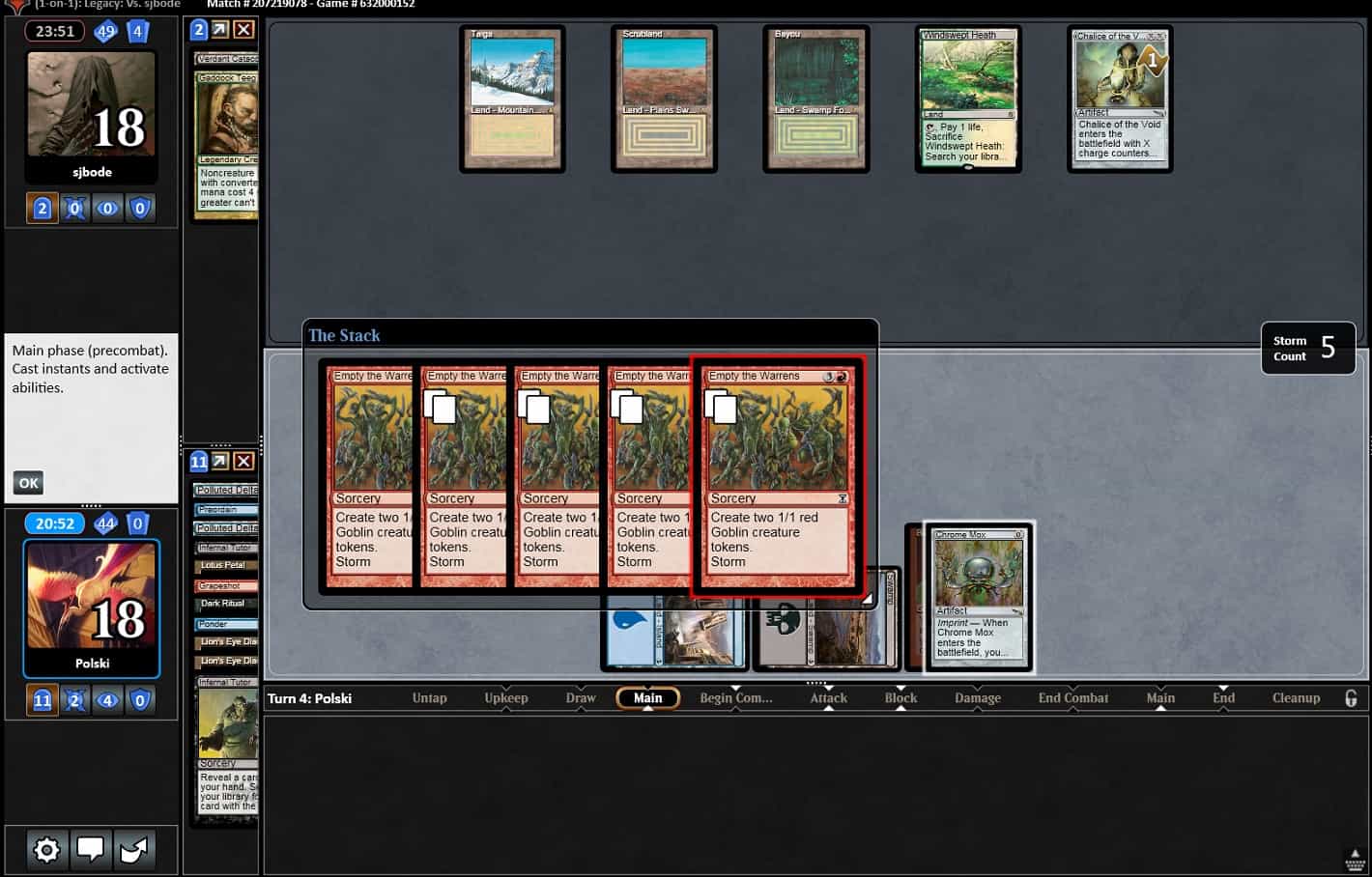 After a couple turns of trading goblins with Dryad Arbor and my opponents drawing blanks I end up getting the first game. My opponent shows me his hand with Wasteland saying he was holding it the whole game. Good thing I fetched out basics earlier. 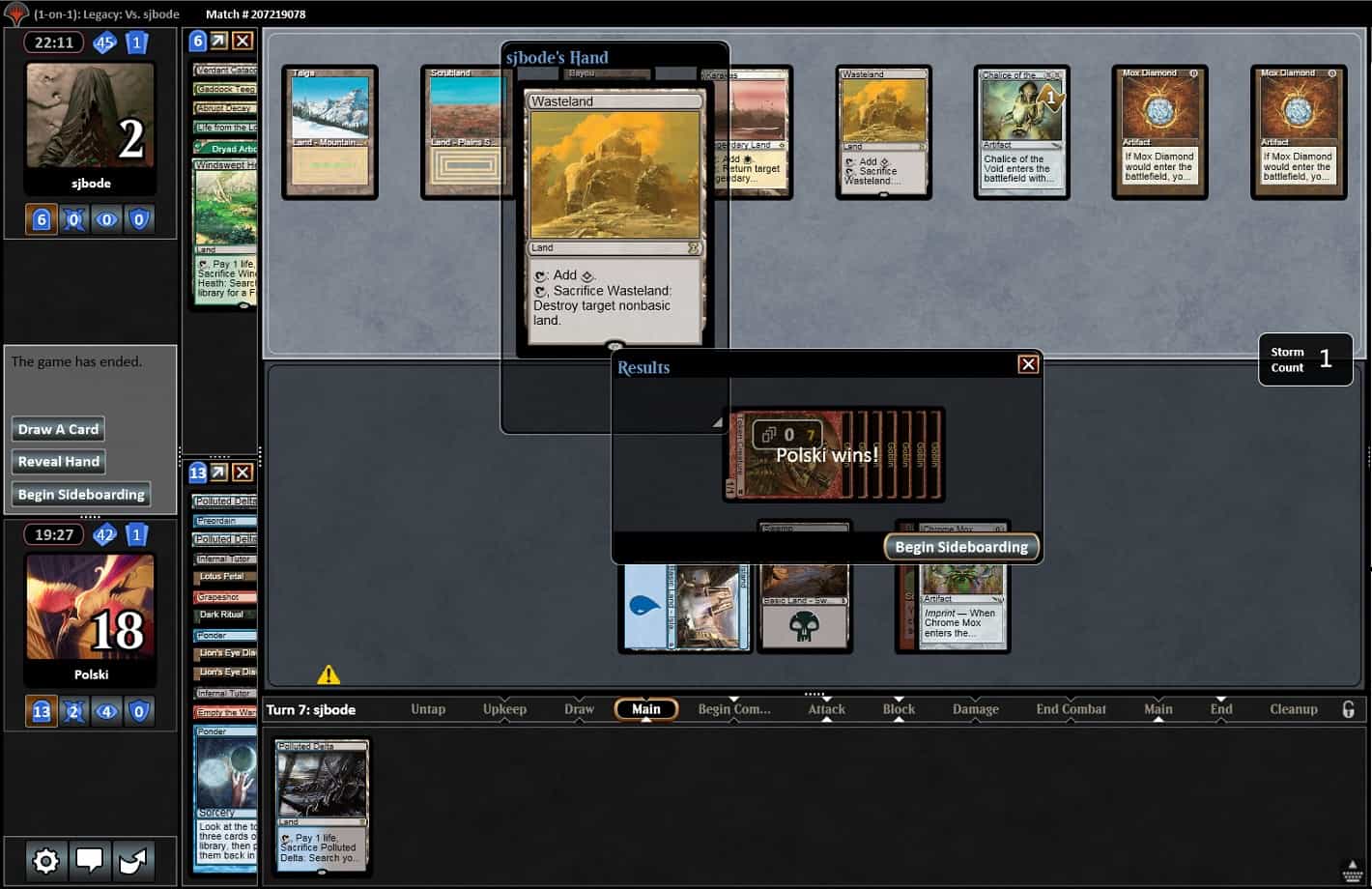 I sideboard accordingly and draw my opening 7.

Before my opponent begins his turn he puts a Leyline of the Void in play. On my first turn I just simply play a fetchland and pass because my hand has a second turn Ad Nauseam and a bounce spell. His second turn he just plays a Sylvan Library and he hopes he can untap. I draw a Dark Ritual for my second turn and proceed to storm off into an easy one. 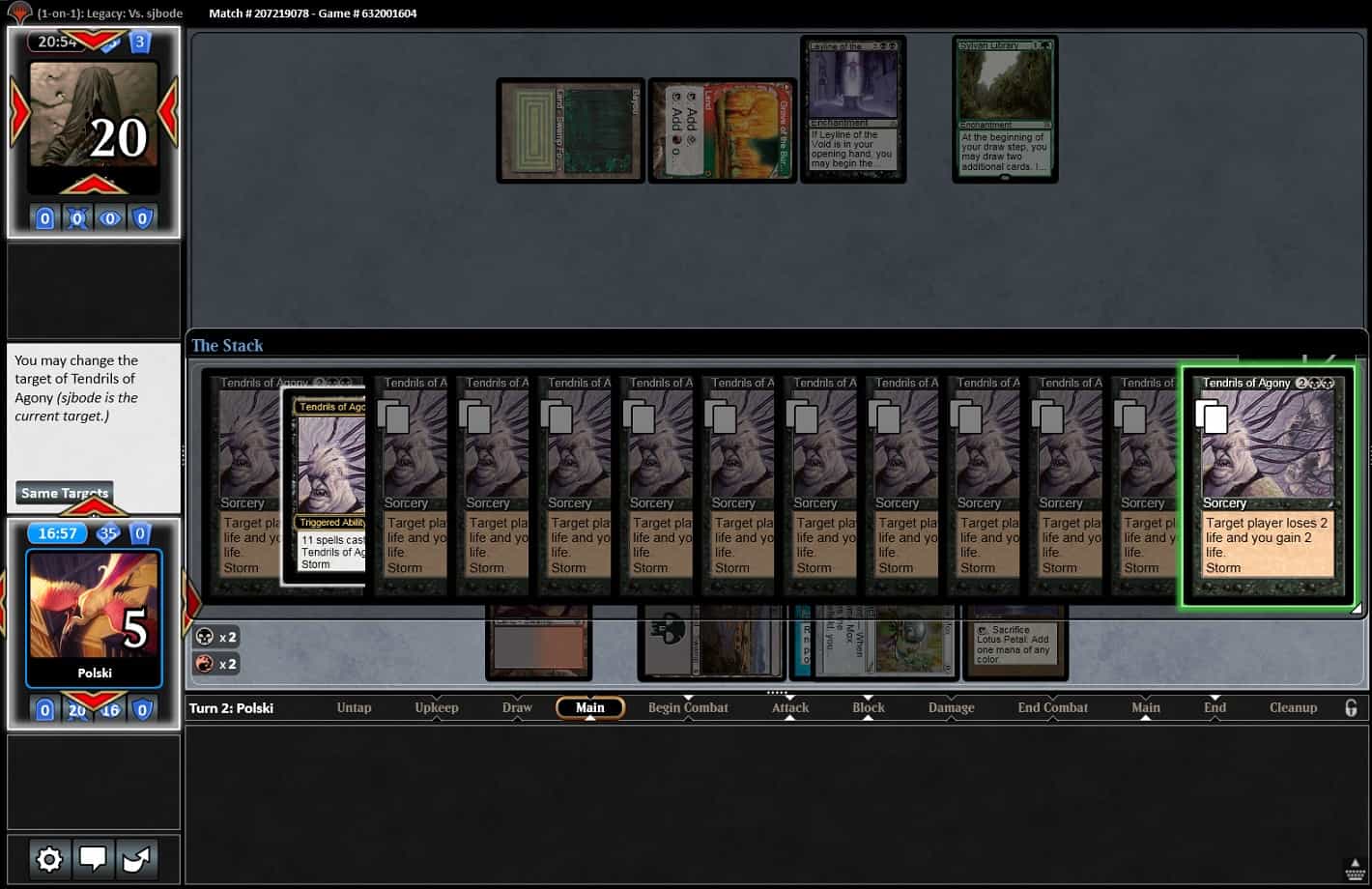 This match exemplifies many angles of this matchup and how we can’t play around everything. For example, in the first game I could afford to play around Wasteland fairly easily. I only drew fetch lands and didn’t have major color requirements. It was a grind with a little luck to be able to win through a Gaddock Teeg and a Chalice of the Void. I could not play around if he had a sweeper. I took that chance hoping he only had 0-1 in his maindeck and I figured odds of winning that route would be higher than an Ad Nauseam with a Chalice of the Void on 1. I predetermined what I was willing to try to beat and play around vs what I chose to gamble on. In a matchup like this attacking on very few angles, but varied hate pieces sometimes you do have to make these decisions based on hand context. If you would have made any decisions differently than me, especially game 1, then make sure to let me know! Thanks for reading and hopefully you play against less hate cards than I do!