Bomberman is a mono-white deck that tries to win the game with several completely different combos. It can win with Auriok Salvagers and Lion’s Eye Diamond to makes infinite mana, Karn, The Great Creator and Mycosynth Lattice to prevent the opponent’s cards from being activated, or Monastery Mentor to make a huge army. This flexibility is why Bomberman is a powerful deck. These cards can be quite expensive from a Legacy perspective, so it uses fast mana like Ancient Tomb, City of Traitors, and Lotus Petal to accelerate ahead of the opponent. Ever since the printing of Karn, The Great Creator, this deck has seen an increase in popularity. There aren’t as many combo decks being played in Legacy right now, but Bomberman is one of them. At GP Bologna 2019, there were three people who played Bomberman to a top-35 finish. This deck is quite unique compared to other decks we may see in Legacy, so it’s important we know how to approach this matchup.

How does Bomberman matchup against TES?

Auriok Salvagers and Lion’s Eye Diamond – We have to remember that Bomberman is a combo deck and these are the two cards that created this deck. Auriok Salvagers and Lion’s Eye Diamond is a combo that makes infinite mana. If there’s a Mystic Forge or Urza’s Bauble in play, it will allow them to cast lots of spells to eventually win with a massive Walking Ballista. Bomberman can assemble this combo quickly, which gives them the flexibility of keeping hands that are faster than some TES hands.

Both decks are combo decks, and for TES, that means we just need quick hands. We are the faster deck in this matchup, so we want to prioritze speed over longevity and protection. They really only have two cards that we care about: Karn, The Great Creator and Chalice of the Void. Other than that, we really don’t have anything preventing us from comboing off. That means we just need to be faster. In the post board games, we get to bring in our answers to their permanents so we aren’t just cold to it. Since we aren’t concerned about any counter spells, we can just put our foot on the gas and go for it. This is a matchup that I do avoid Empty the Warrens because they can just ignore the goblins and combo off themselves or build a big enough army off Mentor to beat our goblins. This new iteration leans a little less on Empty the Warrens, so this shouldn’t be a problem.

The way I sideboard here is basic and straightforward. Veil of Summer and Defense Grid do literally nothing in this matchup. Bomberman is trying to prevent us from comboing off by using permanents. They don’t have any counter spells or things that target us, so these six cards are an easy cut. Likewise, the six cards I bring in are also straightforward. I want to bring in cards that destroy or bounce their lock pieces. Rite of Flame is an interesting one, but I would bring it in because it’s a fast mana source. My goal is to try to win quickly before the opponent can cast their permanents, and Rite of Flame increases those chances. I want more copies in my deck to help with that.

I won the die roll and saw my opening seven cards, and it was one of the best draws I could have in this matchup. I had a turn one Echo of Eons with four mana left over. There was a really high chance that would be good enough to kill, so I obviously kept. 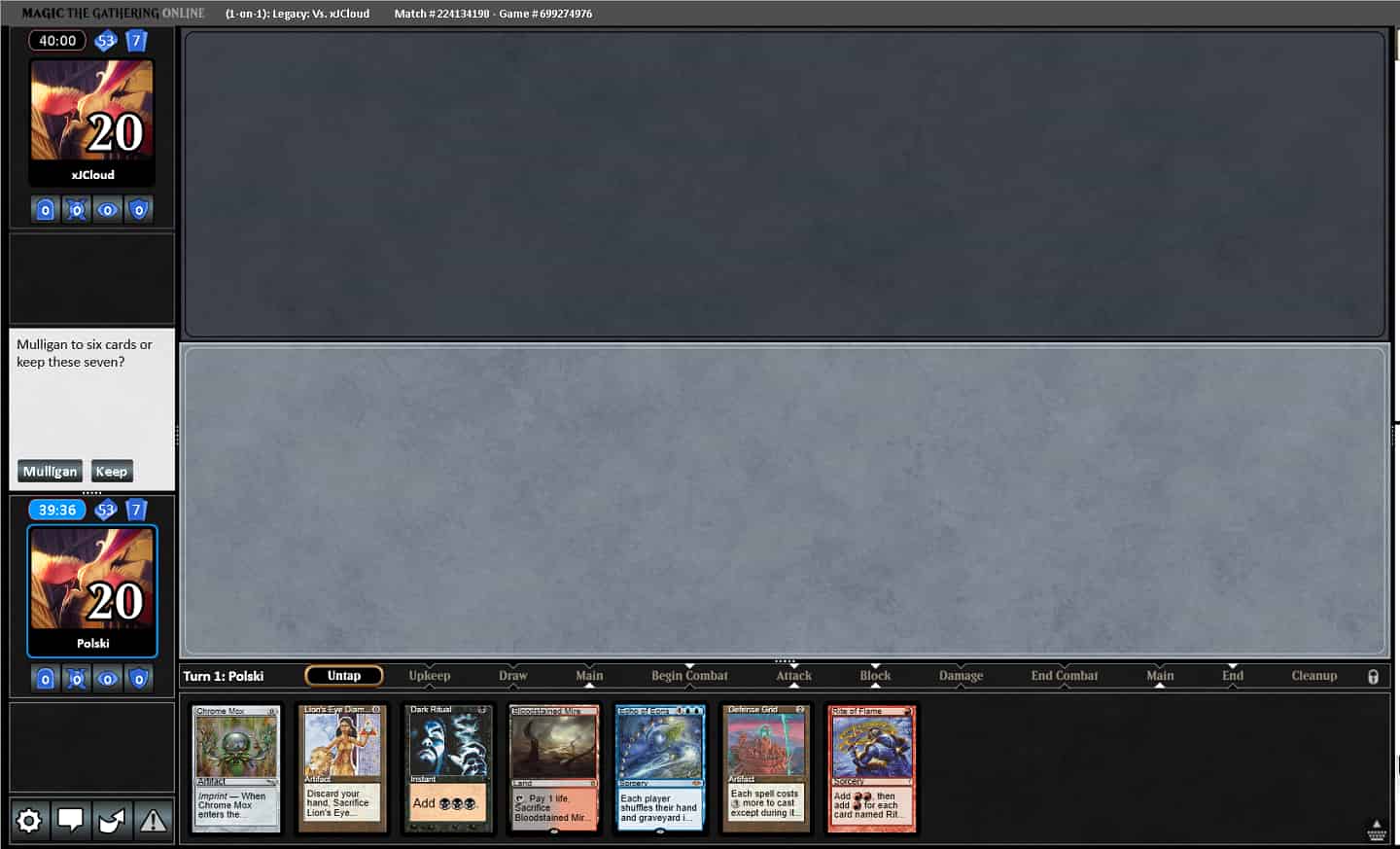 I went for that exact line, and then we both drew another seven cards. That hand didn’t have a confirmed win, but there was an Ad Nauseam I could cast which would surely find what I needed with three mana floating from a Lion’s Eye Diamond. 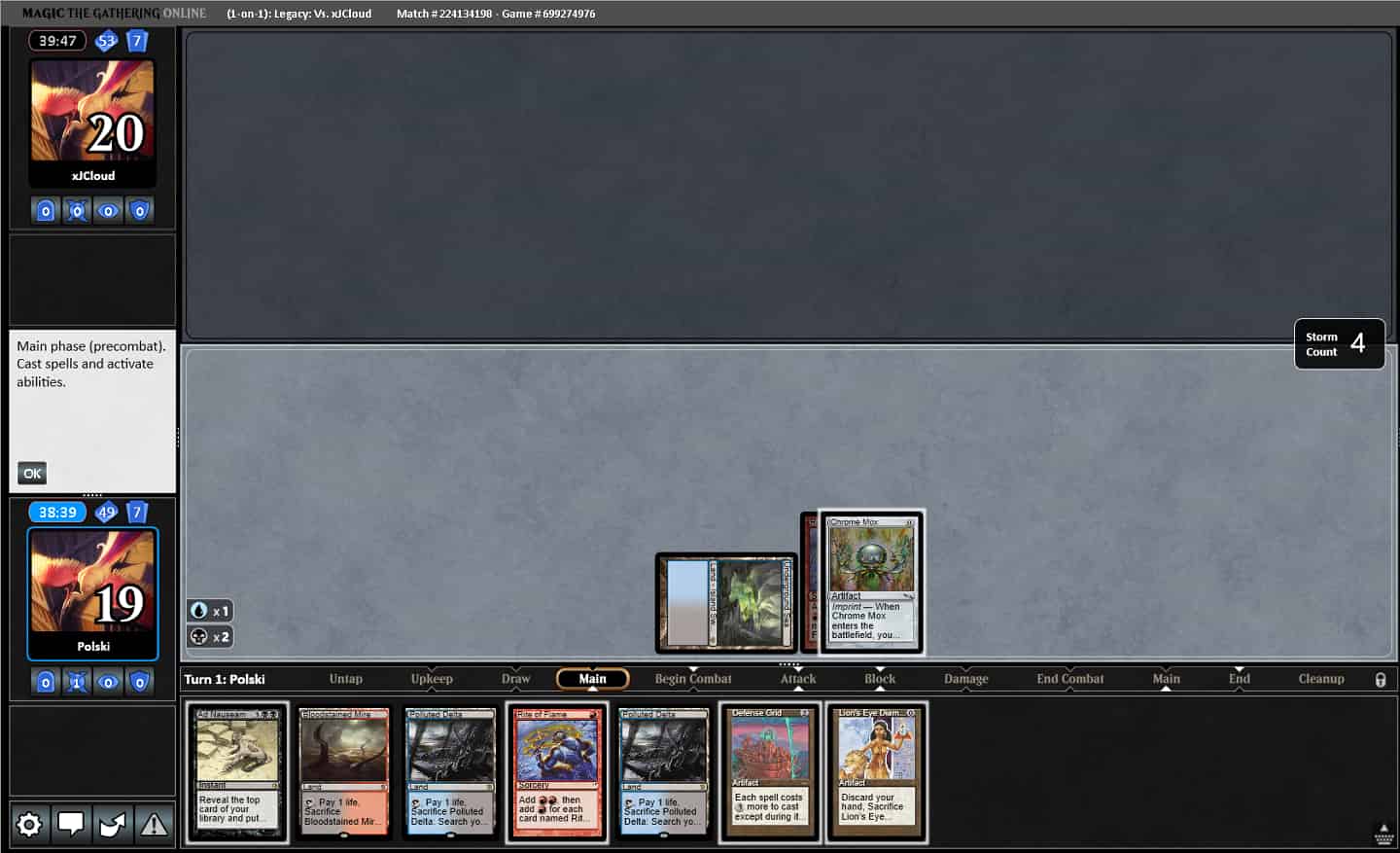 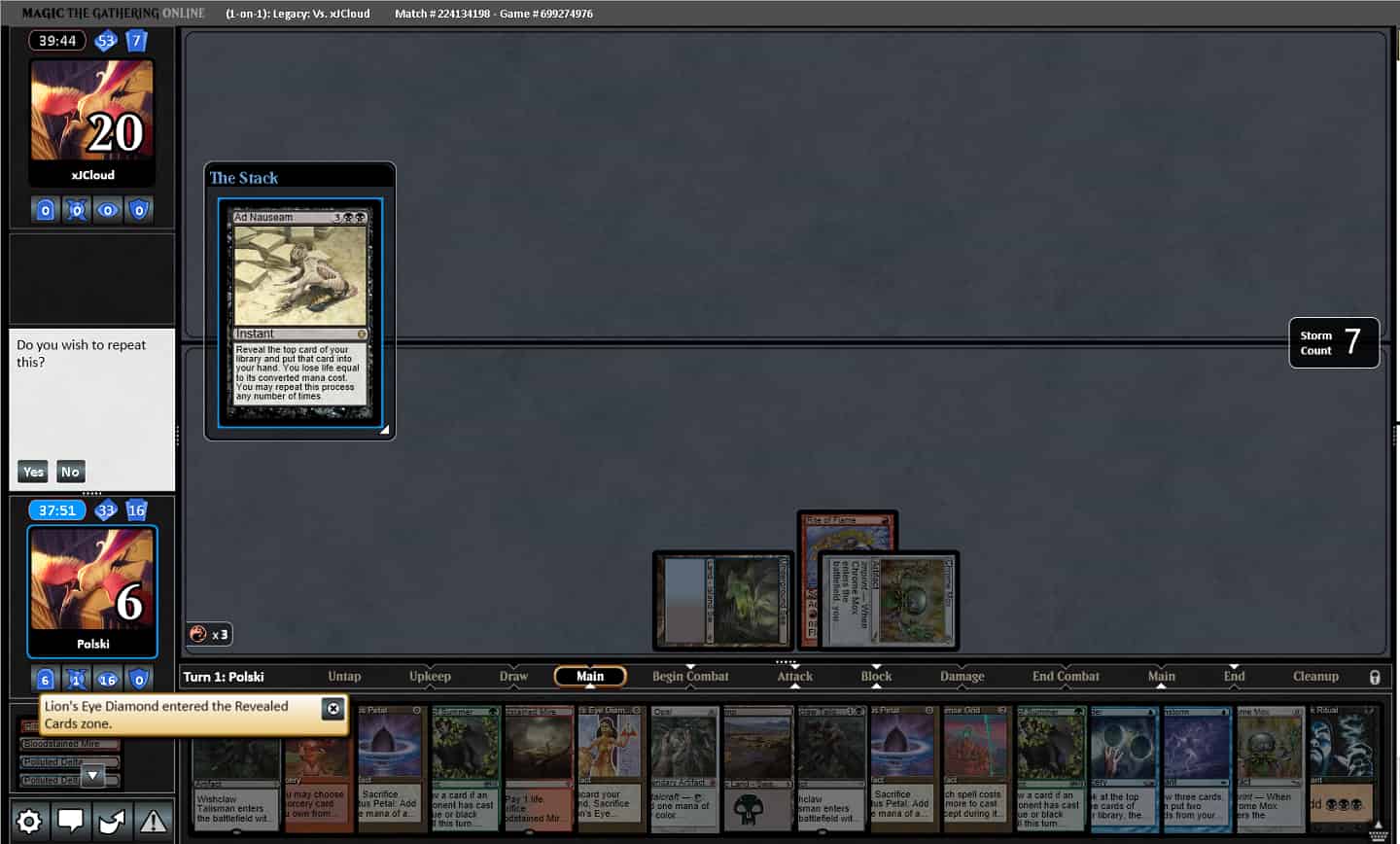 The Ad Nauseam was good enough as I drew plenty of artifact mana and a Burning Wish. That was enough to tutor for Tendrils of Agony with more than enough Storm for 20 damage. 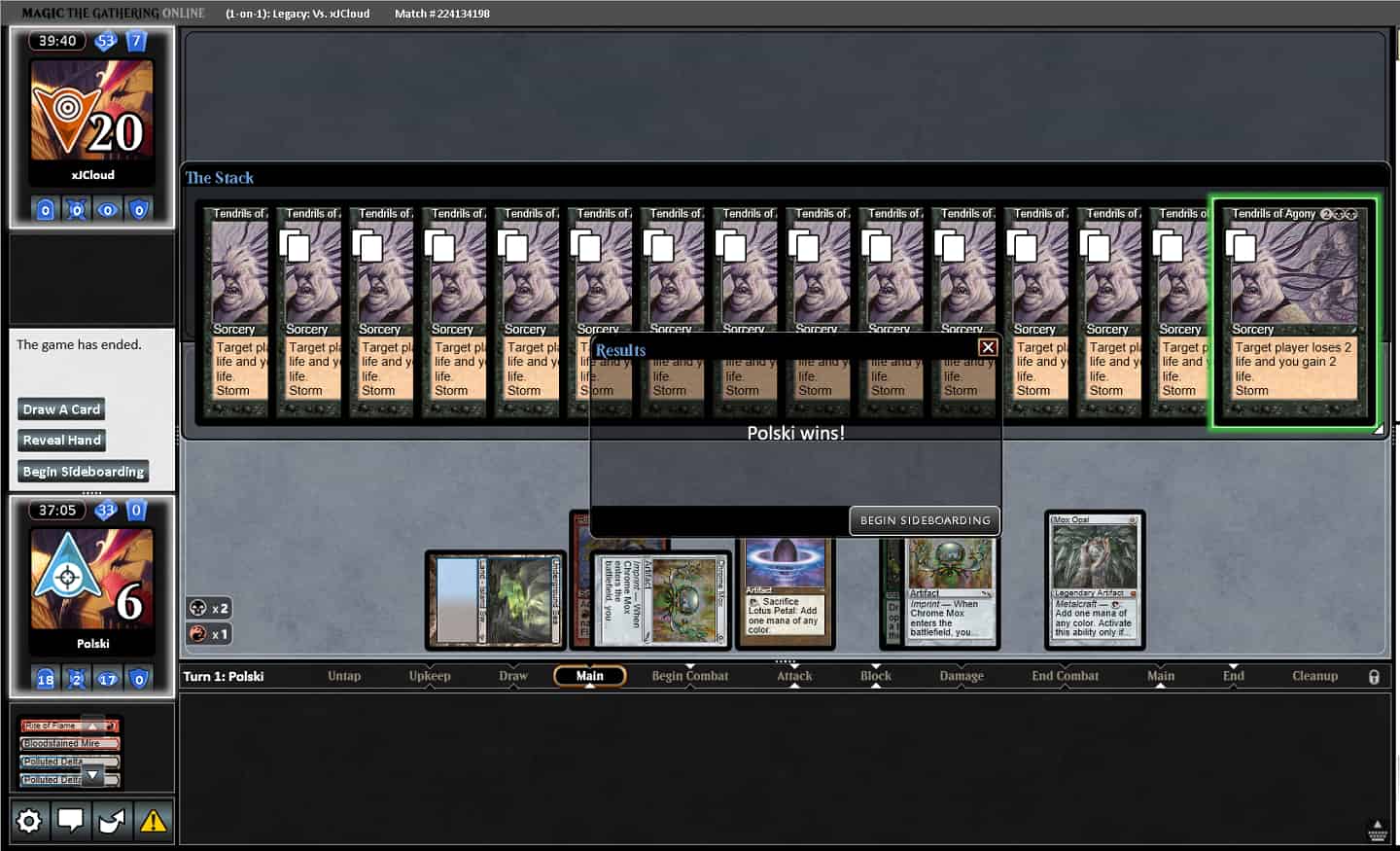 I sideboarded exactly like I recommended in the previous section and ended up mulliganing down to a decent six-card hand. I decided to put the Chrome Mox back because I was low on colored spells and wanted the extra lands in case the game lasted several turns. 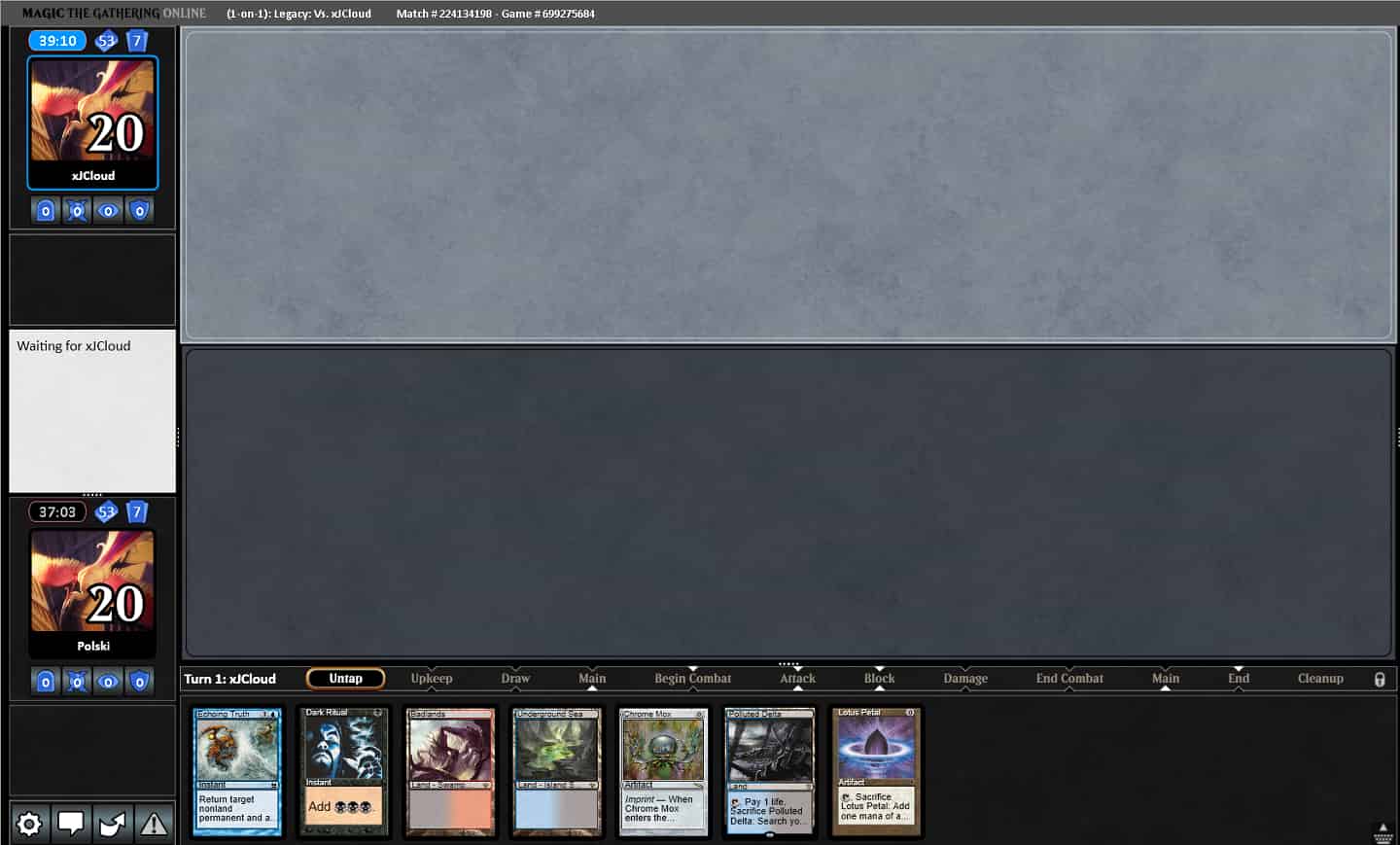 A couple of turns go by and on my opponent’s second turn they played a Mystic Forge into a Mox Opal. On my second turn, I drew an Echo of Eons and passed the turn back to leave up Echoing Truth. I could have cast Echoing Truth during my turn on Mystic Forge, but I was afraid of Chalice of the Void. On their third turn, they tapped and activated the Mystic Forge. This indicated to me that they didn’t have a Chalice of the Void in their hand, and was looking for it or something better on the top of their library to cast. I decided to just use the Echoing Truth now in response to avoid them finding it or comboing off another way. 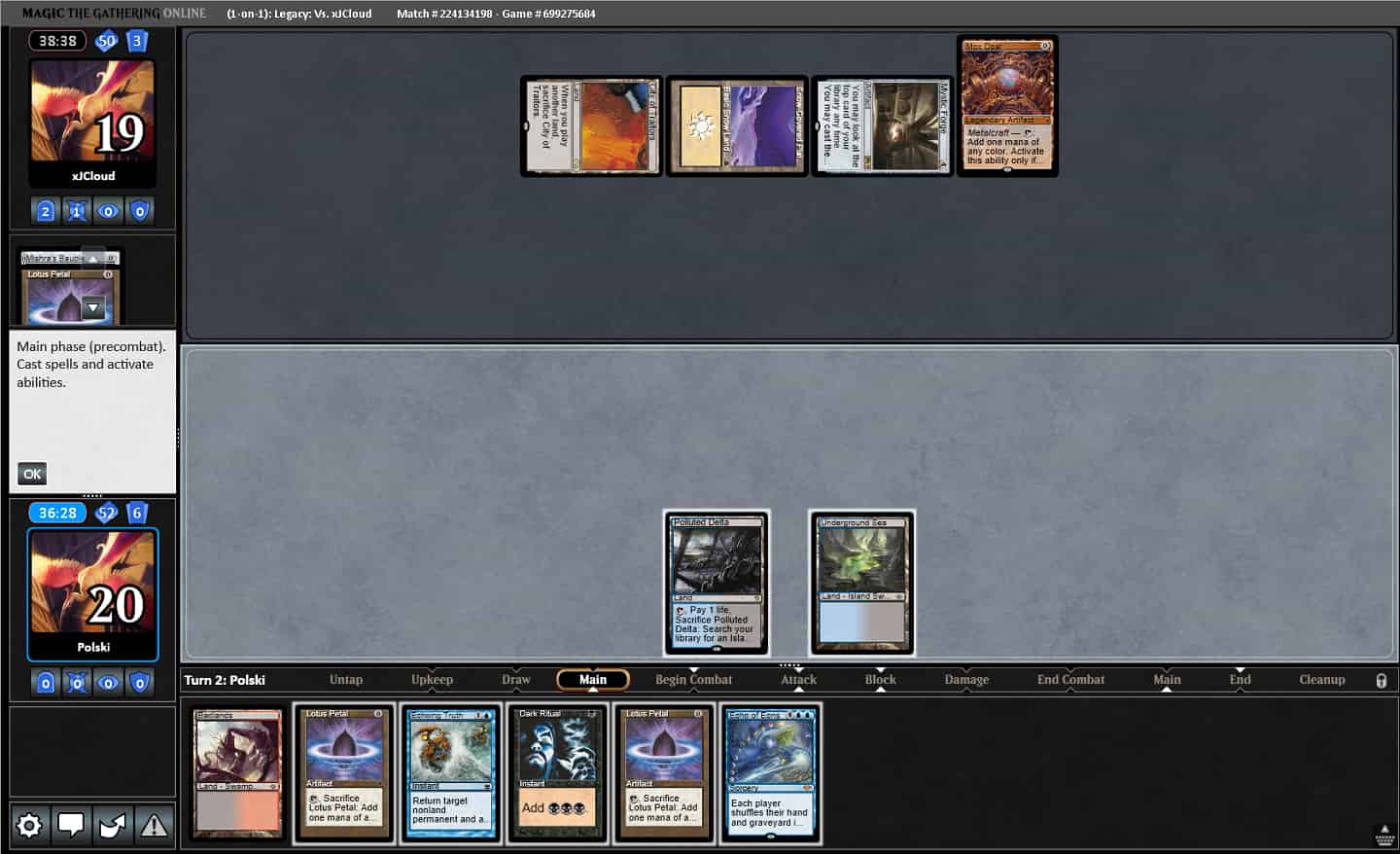 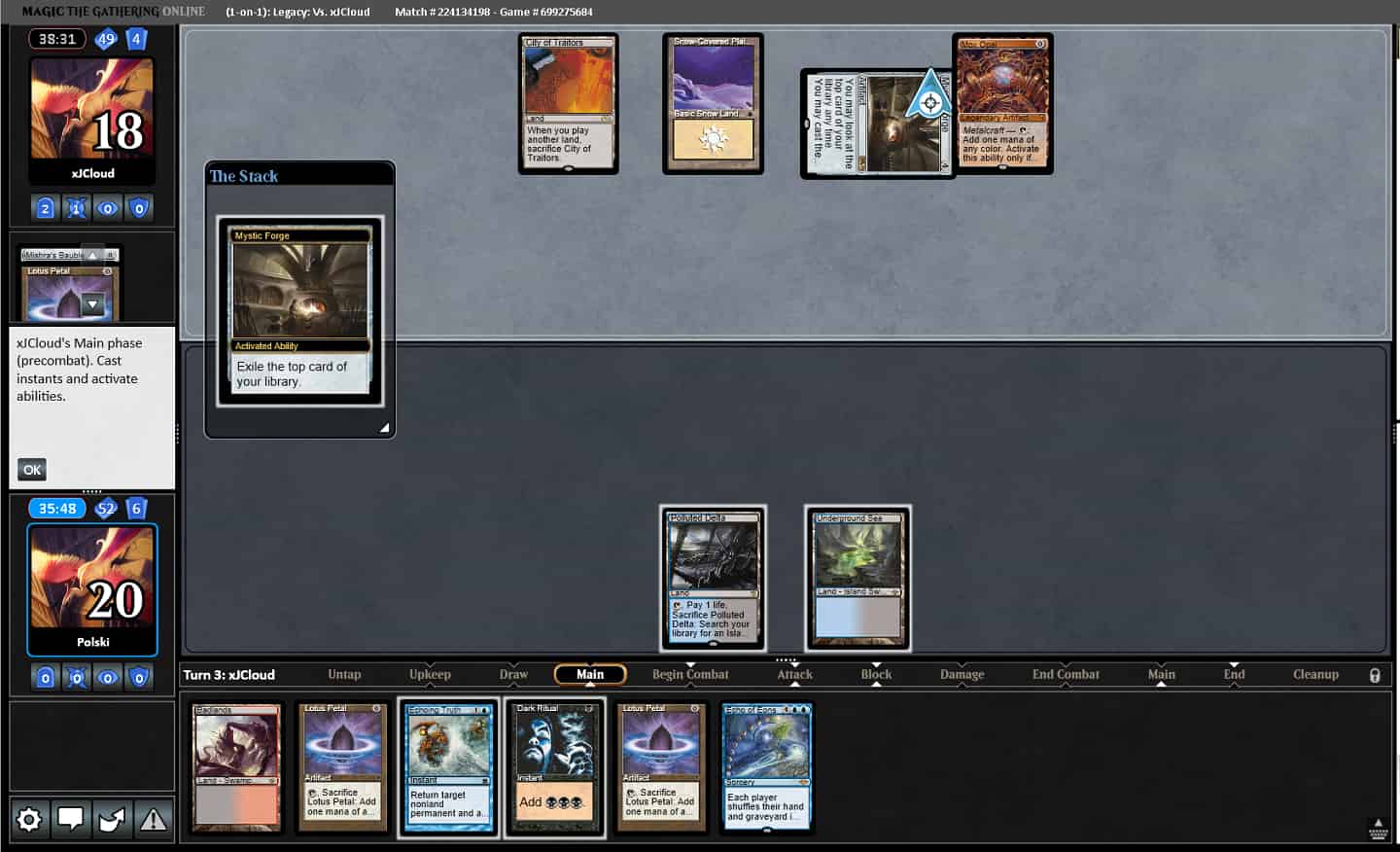 Once Mystic Forge was returned to their hand, they didn’t have the fourth mana to recast it. They opted for Walking Ballista and passed back. On my third turn, I drew Thoughtseize. I realized that was the perfect draw, because it allowed me to target myself to put Echo of Eons into the graveyard to be able to flash it back with three mana floating. 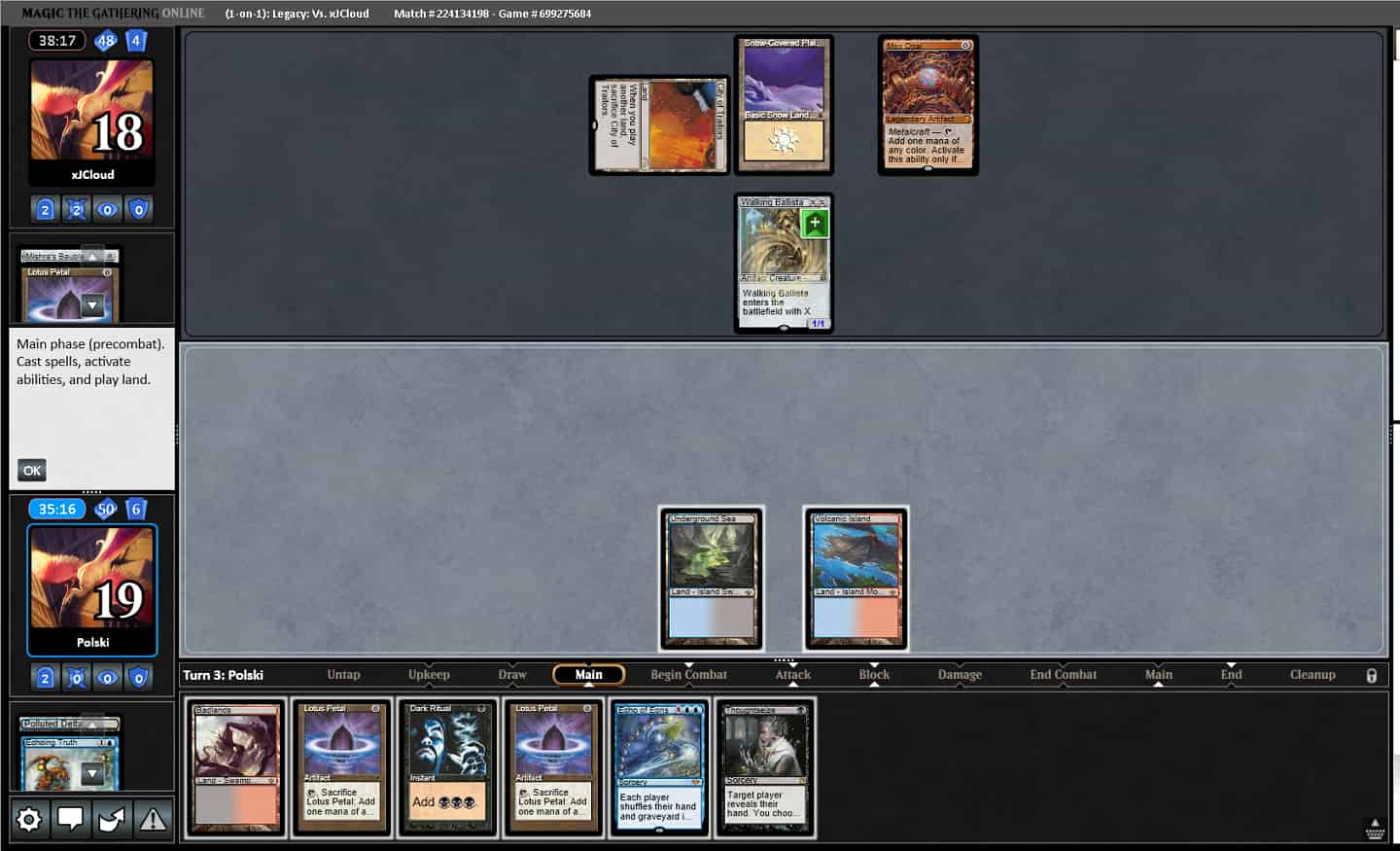 That all resolved and we both drew our seven cards, and it was enough to win! I drew plenty of mana to be able to Burning Wish for Tendrils of Agony with enough Storm. 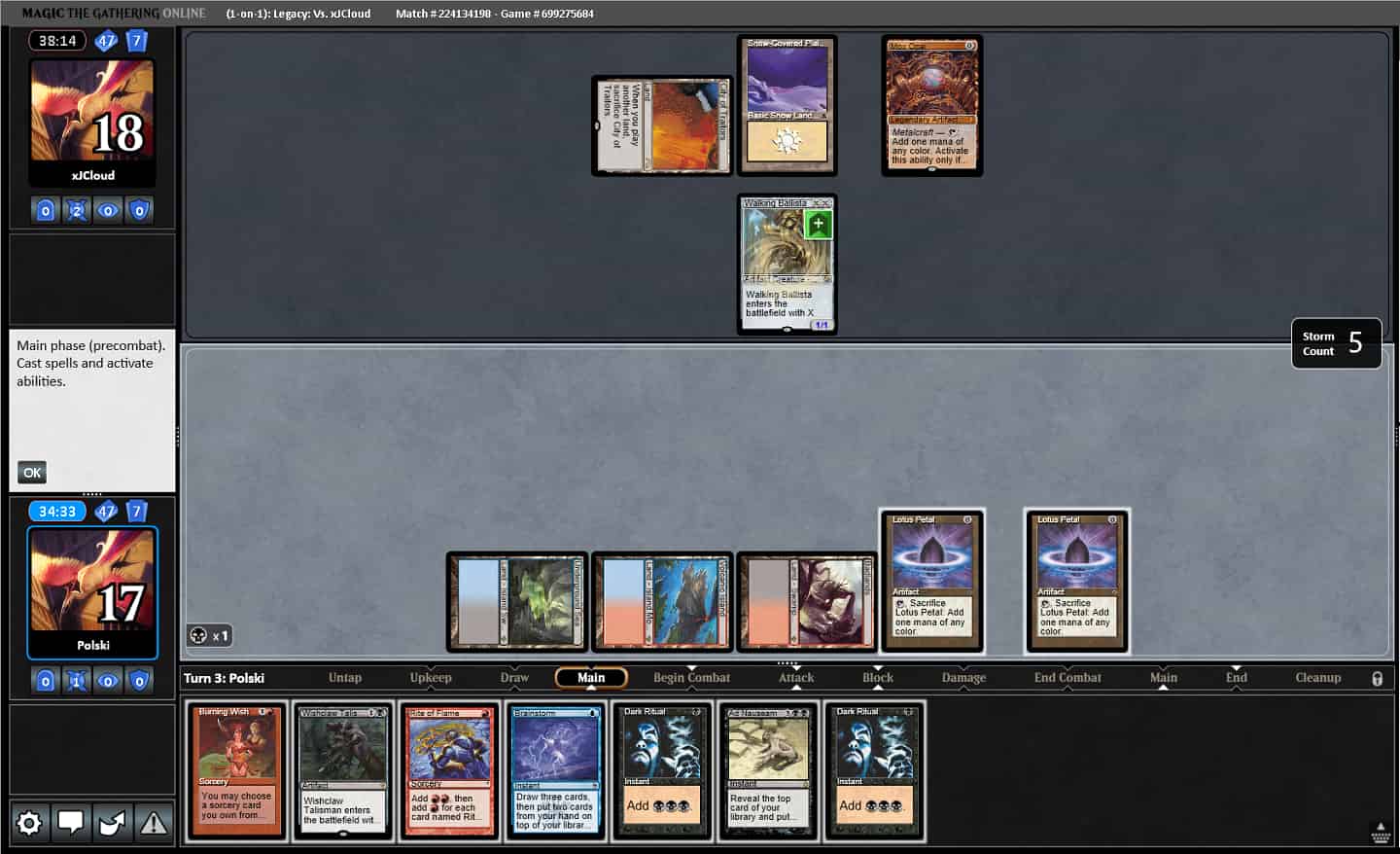 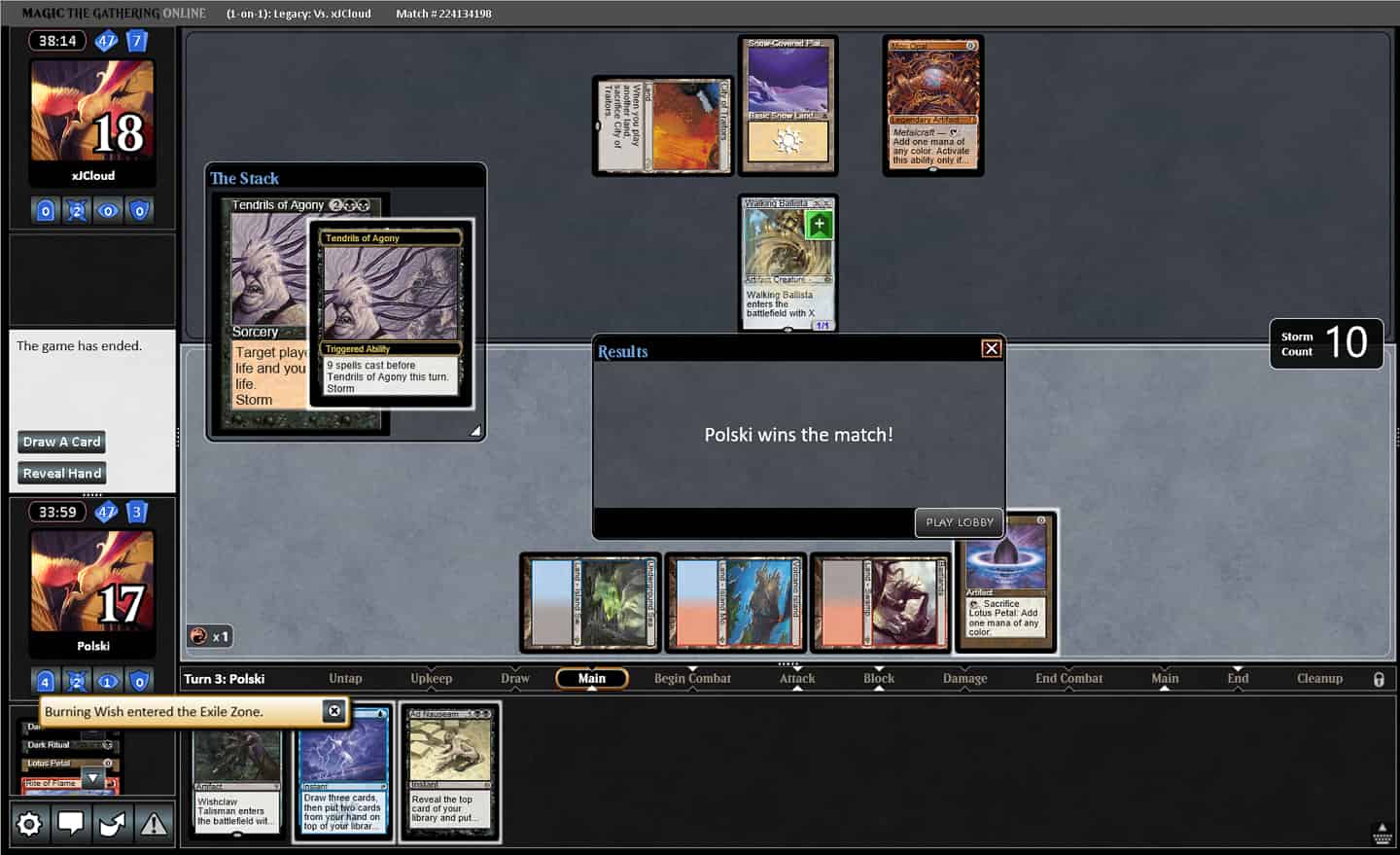 My opponent put it best, “This matchup is like two ships passing.” I think they’re definitely right. A lot of these games are just often racing or not interactive in any way. Both players just do their own thing and hope it’s good enough. Neither deck has a ton of interaction for the other. It’s usually between 6-10 spells for us to interact with permanents and their play sets of both Karn, The Great Creator and Chalice of the Void to disrupt us. I don’t think this matchup is as lopsided as I made it look in my example game, but I do believe TES is heavily favored as we are just faster. As we move away from discard in favor of Veil of Summer, Chalice of the Void decks do become worse for us. Will Bomberman be a major player in the format moving forward? I’m still unsure, but I wouldn’t be surprised if many players played it at big events with a few putting up decent results. Thanks for reading, and I wish you the best of luck in your own testing!