BUG Ninjas is a fairly new deck that takes advantage the Ninjutsu ability, using [[Yuriko, the Tiger’s Shadow]] and [[Ingenious Infiltrator]]. This allows the deck to draw multiple cards a turn to overwhelm the opponent in card advantage. In order to do this as early as possible, they play cards like [[Ornithopter]] and [[Changeling Outcast]] on turn one and play a ninja on the second turn. Outside of this interaction, BUG Ninjas plays lots of cantrips, counterspells, removal spells, and even [[Oko, Thief of Crowns]]. We are familiar with playing against other types of tempo decks, but BUG Ninjas has a unique aspect to it.

How does BUG Ninjas matchup against TES?

[[Yuriko, the Tiger’s Shadow]], [[Ingenious Infiltrator]] – These are the namesake cards that the deck is based around. When BUG Ninjas has one of these in play and they’re drawing multiple cards a turn, the deck is very difficult to beat.

[[Force of Will]], [[Force of Negation]], [[Thoughtseize]] – This is the main form of disruption that we, and other combo decks, need to be concerned about. If BUG Ninjas starts drawing several cards a turn, this can snowball quickly to getting multiple forms of disruption.

[[Abrupt Decay]], [[Oko, Thief of Crowns]] – BUG Ninjas have a few ways to interact with permanents. This is important to note because we don’t want to make a mistake by playing out a crucial artifact like [[Lion’s Eye Diamond]] or [[Wishclaw Talisman]] if we don’t plan on using it. If we do, said artifacts could get targeted by [[Abrupt Decay]] or [[Oko, Thief of Crowns]]. If we play wisely, these two cards could be pretty bad against Storm.

The key to winning this matchup is to be faster than their game plan, but not so fast that we run into a counterspell recklessly. In the first couple of turns, the opponent is going to be setting up their [[Retrofitter Foundry]] to make 4/4’s or a ninja to draw extra cards. Both are good and hard to beat if we are too slow. We need to try to win before this, but we aren’t under the same type of pressure that we see from other decks. The opponent can’t combo off on the first turn of the game. They also can’t play a [[Chalice of the Void]] or any other type of lock piece. This means there’s no rush to try to win on turn one or two. This also means the range of hands that we can keep is a little higher. We don’t have to feel forced to mulligan down to six or five cards looking for the perfect hand. The reasonable hand involves being able to combo before the fourth turn, but also being able to beat a counterspell.

None
All of the cards in the maindeck are really good. There’s also nothing in the sideboard that improves our matchup by bringing it in. This is an easy decision to make no changes.

My opponent won the die roll and chose to play first. We both kept our seven-card hands. My opponent led off their first turn with two copies of [[Ornithopter]] and a [[Retrofitter Foundry]]. My opening hand was pretty good with lots of mana, a [[Wishclaw Talisman]], and some protection. On my first turn, I cast a [[Ponder]] and ended up shuffling and then drew a [[Lion’s Eye Diamond]]. I wasn’t able to combo off this turn, but I was hoping to on my second turn. 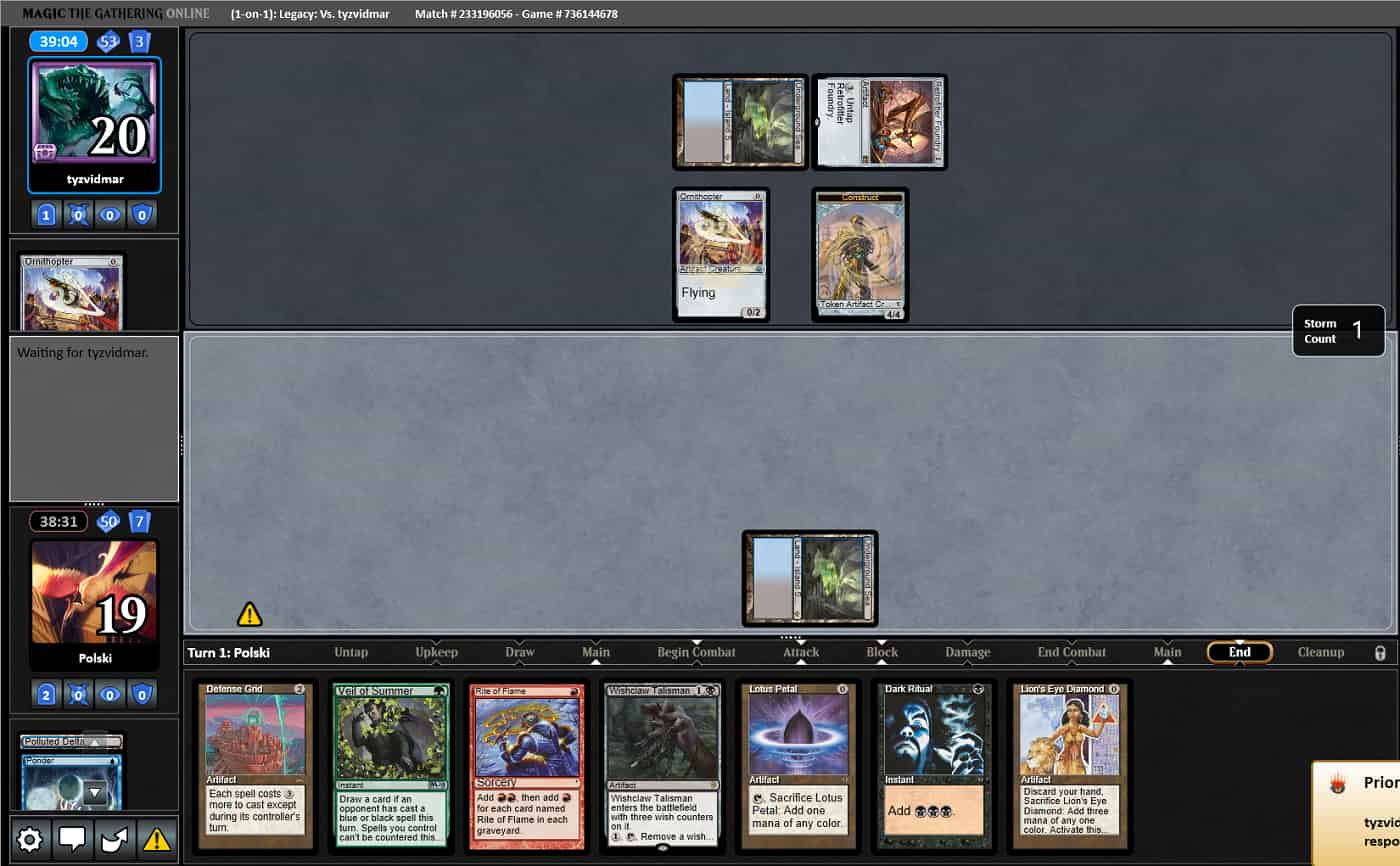 During my end step, my opponent sacrificed an [[Ornithoper]] to make a Construct token. On their turn, they attacked with both creatures and then returned their [[Ornithoper]] to put in [[Ingenious Infiltrator]]. That allowed them to draw a card and then recast their [[Ornithoper]]. On my next turn, I drew a [[Brainstorm]] and immediately cast it. The cards I drew were perfect. That would be enough for me to combo off this turn, I just needed to decide the best route to take. 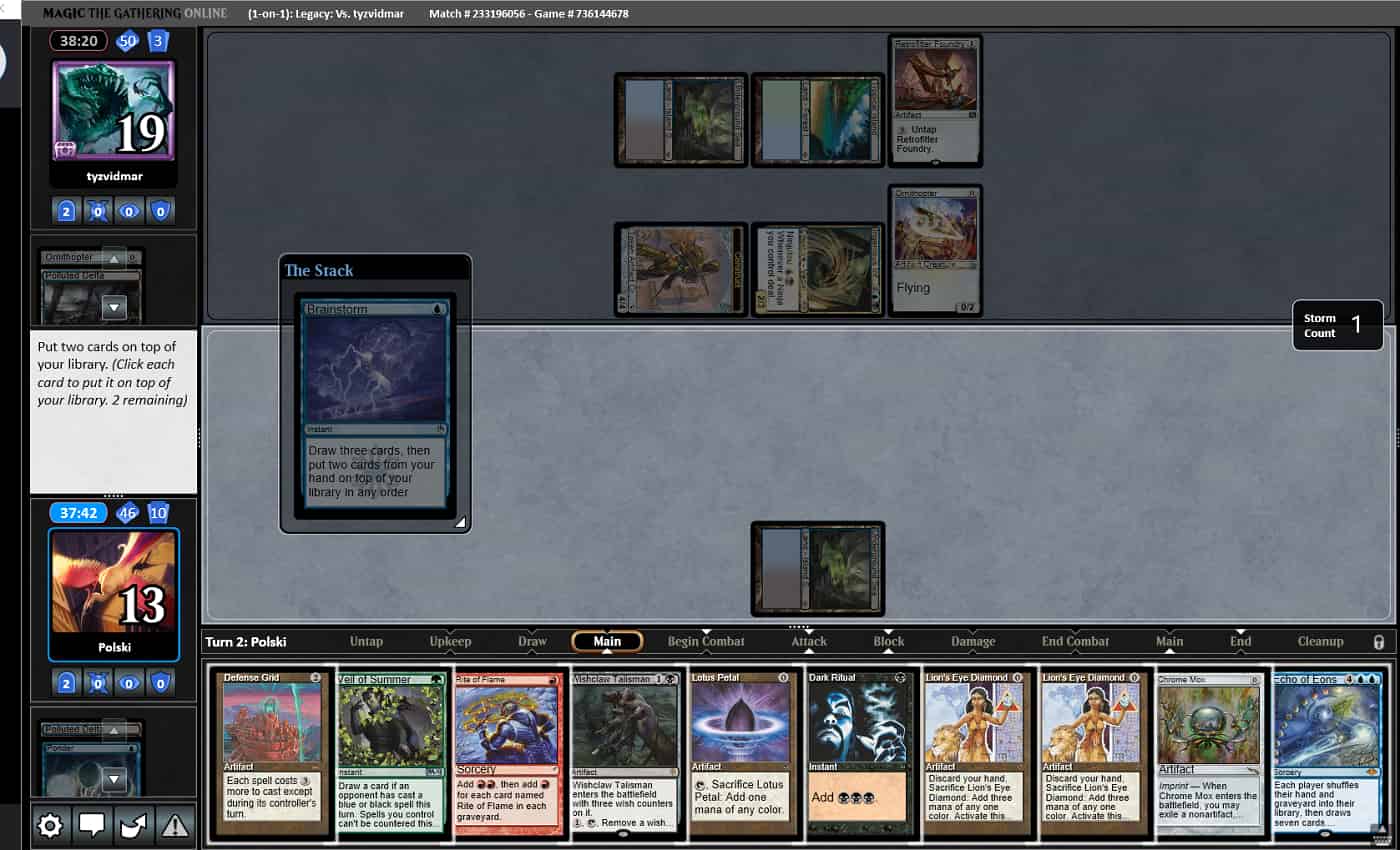 I decided to put back the [[Defense Grid]] and [[Wishclaw Talisman]]. I messed up and should have put back the [[Veil of Summer]] instead of the [[Defense Grid]]. I got a little excited I could combo here and ended up putting back the wrong card. From there I played the [[Chrome Mox]] and imprinted [[Rite of Flame]]. I then cast the [[Lotus Petal]], for [[Dark Ritual]], and both copies of [[Lion’s Eye Diamond]]. I sacrificed one [[Lion’s Eye Diamond]] for three blue and the other for three black. Using the three blue mana, I then cast [[Echo of Eons]] using Flashback. This left me with six black floating. I should have four black floating and a [[Defense Grid]] in play, but I hoped my mistake wouldn’t cost me. 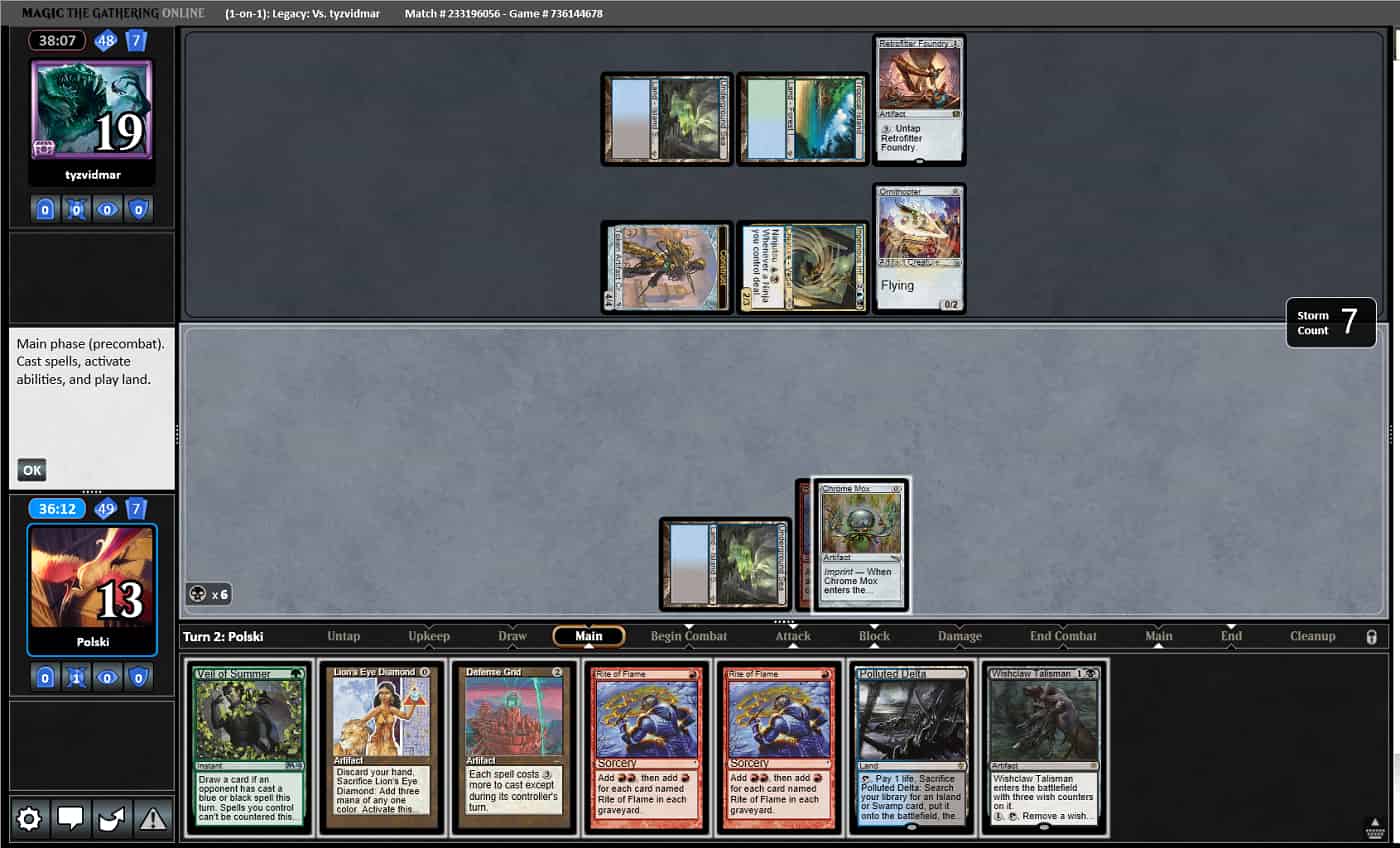 Thankfully, they didn’t have a counterspell, and my [[Echo of Eons]] resolved. The opponent could have drawn a [[Force of Will]] off of their new seven cards, so I made sure I didn’t make the same mistake twice and cast the [[Defense Grid]]. From there, I was easily able to win with both copies of [[Rite of Flame]] and the [[Lion’s Eye Diamond]] to use [[Wishclaw Talisman]] to get a [[Burning Wish]] for [[Tendrils of Agony]]. 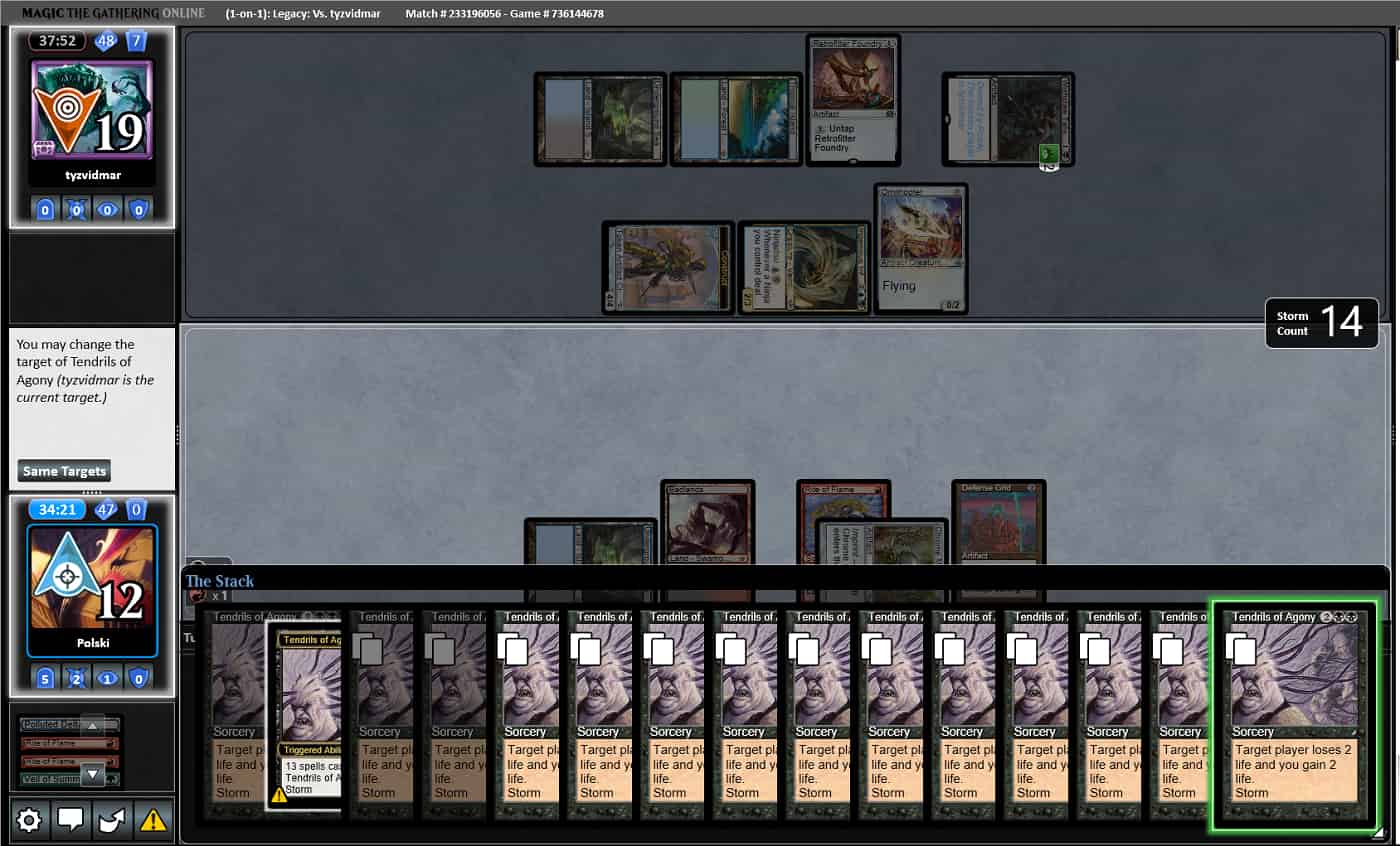 1-0
For the second game, my opponent was on the play and I kept a hand that was borderline keepable. It was a slower hand, but it had all of the necessary pieces. On my opponent’s first turn, they played out two copies of [[Ornithopter]] and a [[Retrofitter Foundry]] setting up for two 4/4’s. On my second turn, I had the ability to cast two copies of [[Burning Wish]] and then cast [[Echo of Eons]] off the [[Lion’s Eye Diamond]]. If they let the first one resolve, I can get a [[Thoughtseize]]. If they counter the first [[Burning Wish]], then hopefully they don’t have a second counter. Unfortunately, they did counter the first one. 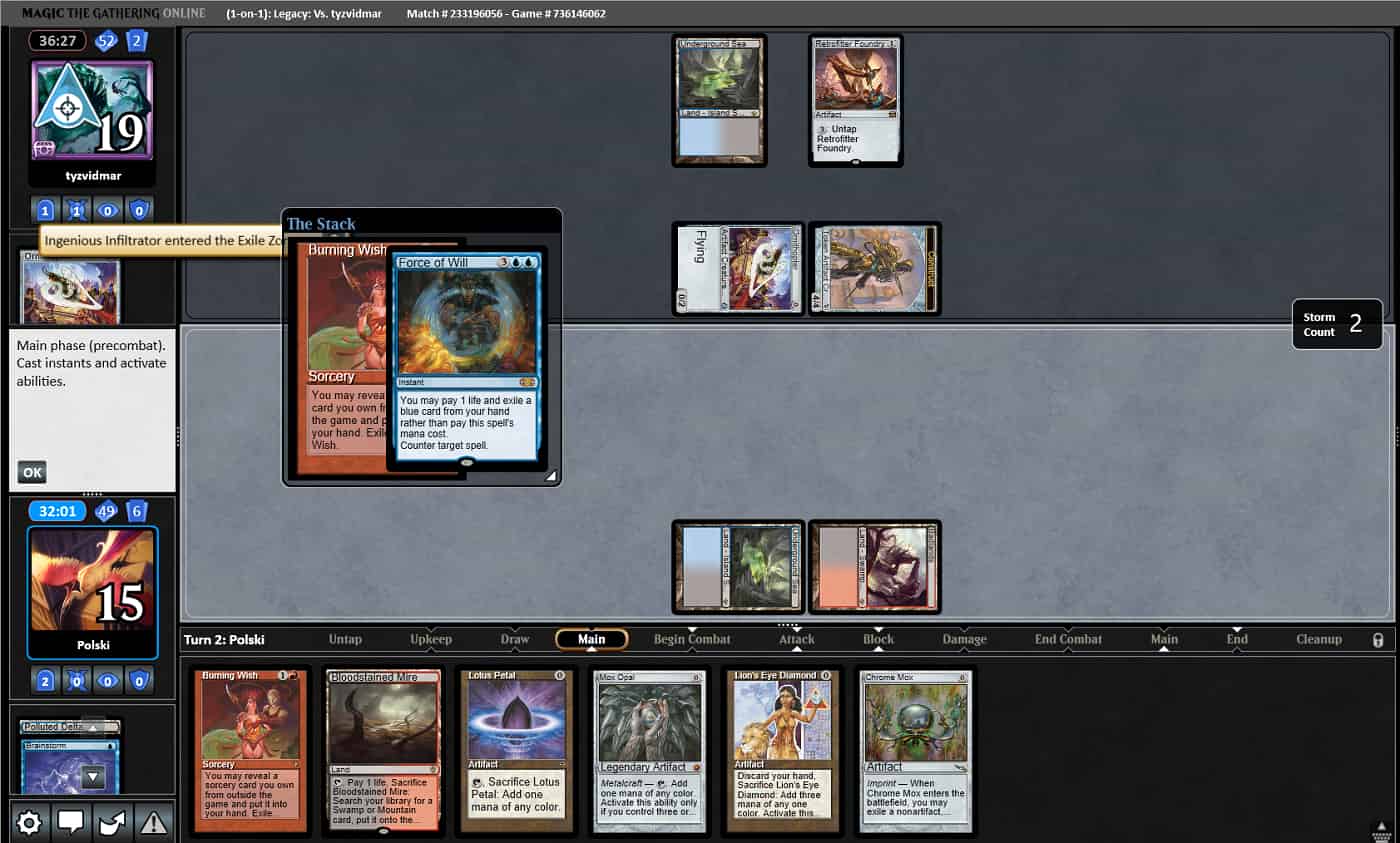 I decided to just go for it here and cast the second [[Burning Wish]] for [[Echo of Eons]]. It resolved, but my next seven cards were pretty bad. I couldn’t continue my combo here. At my end step my opponent made another 4/4. I just wasn’t able to do much this game and ended up losing to their creatures. 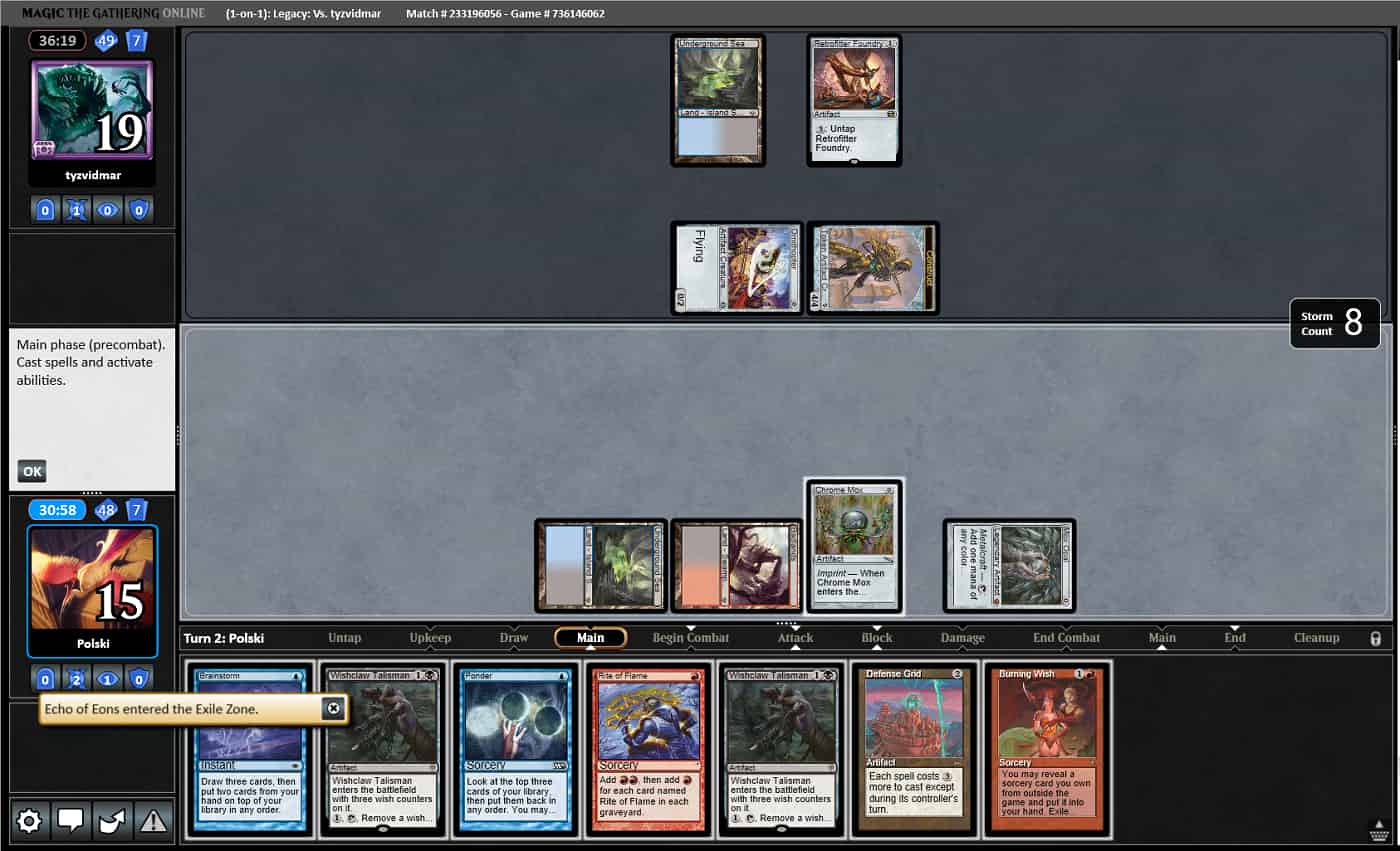 1-1
For the third game, I was on the play and had a really good hand. My plan was to cast [[Brainstorm]] on my opponent’s end step and try to combo off on the second turn. It found a [[Lion’s Eye Diamond]] which would allow me to combo off. I had to decide if I wanted to combo on my second turn, but without any protection or wait longer. I ultimately decided to go for it here. They only had four cards in hand. 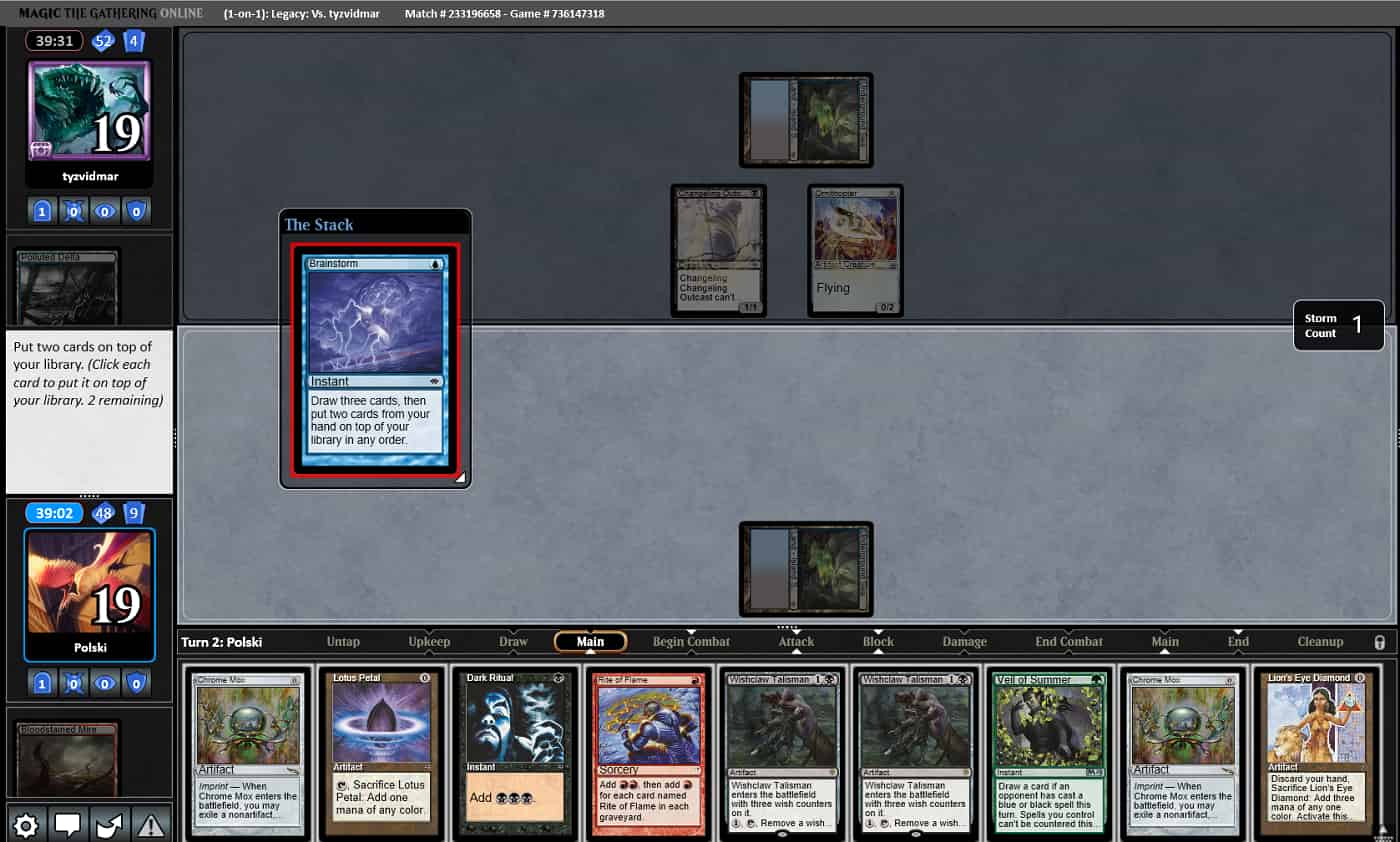 I used the [[Lotus Petal]] to cast [[Dark Ritual]] and then cast and use the [[Wishclaw Talisman]] to get [[Echo of Eons]] and then cast it using flashback with the [[Lion’s Eye Diamond]]. Thankfully, it all resolved and my seven-card hand was great. I had the resources to continue comboing here, plus a [[Defense Grid]] in case my opponent drew any counterspells. I was able to play out both copies of [[Dark Ritual]] and the [[Defense Grid]] into [[Ad Nauseam]]. 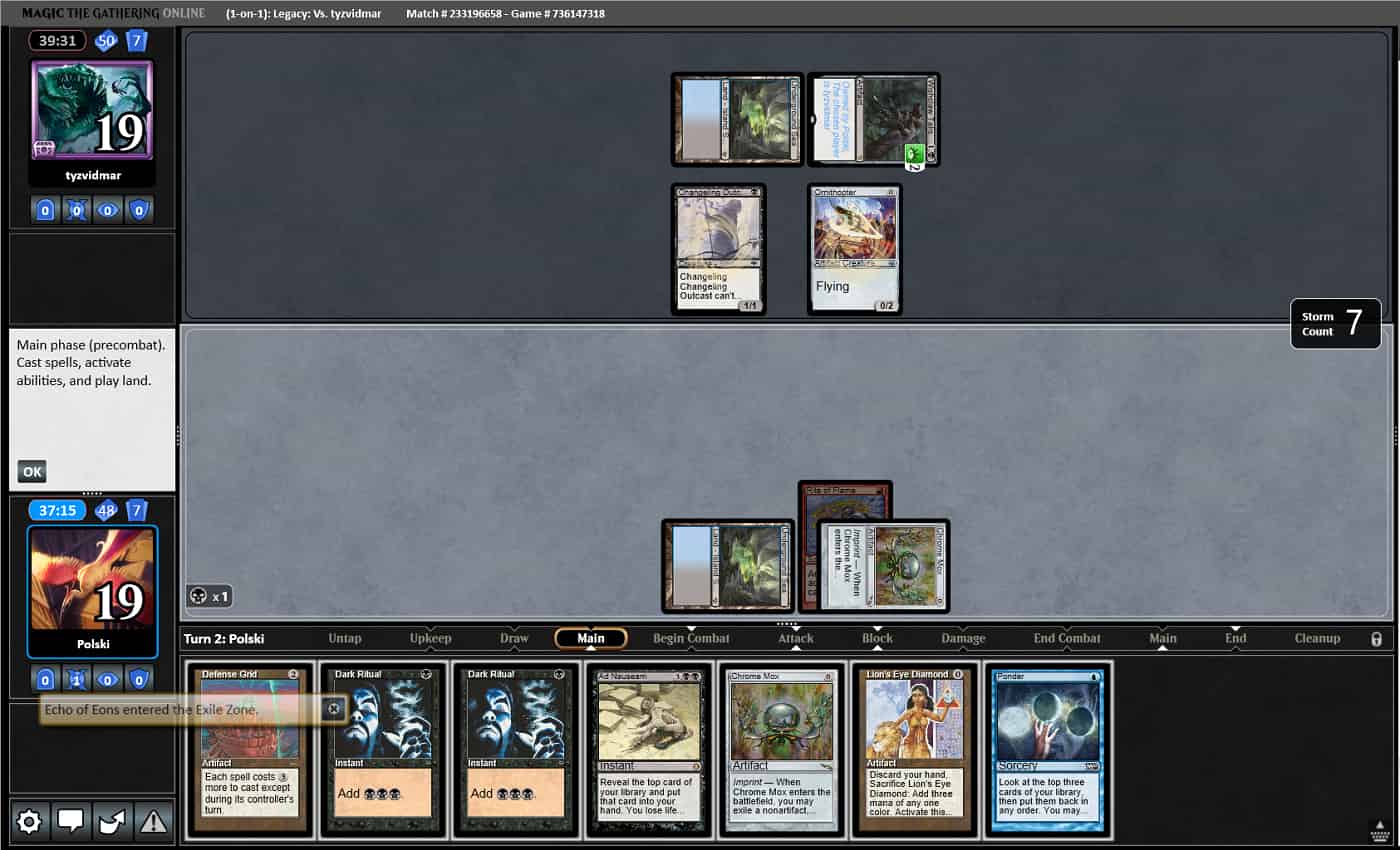 The [[Ad Nauseam]] was good enough to win with [[Grapeshot]]! 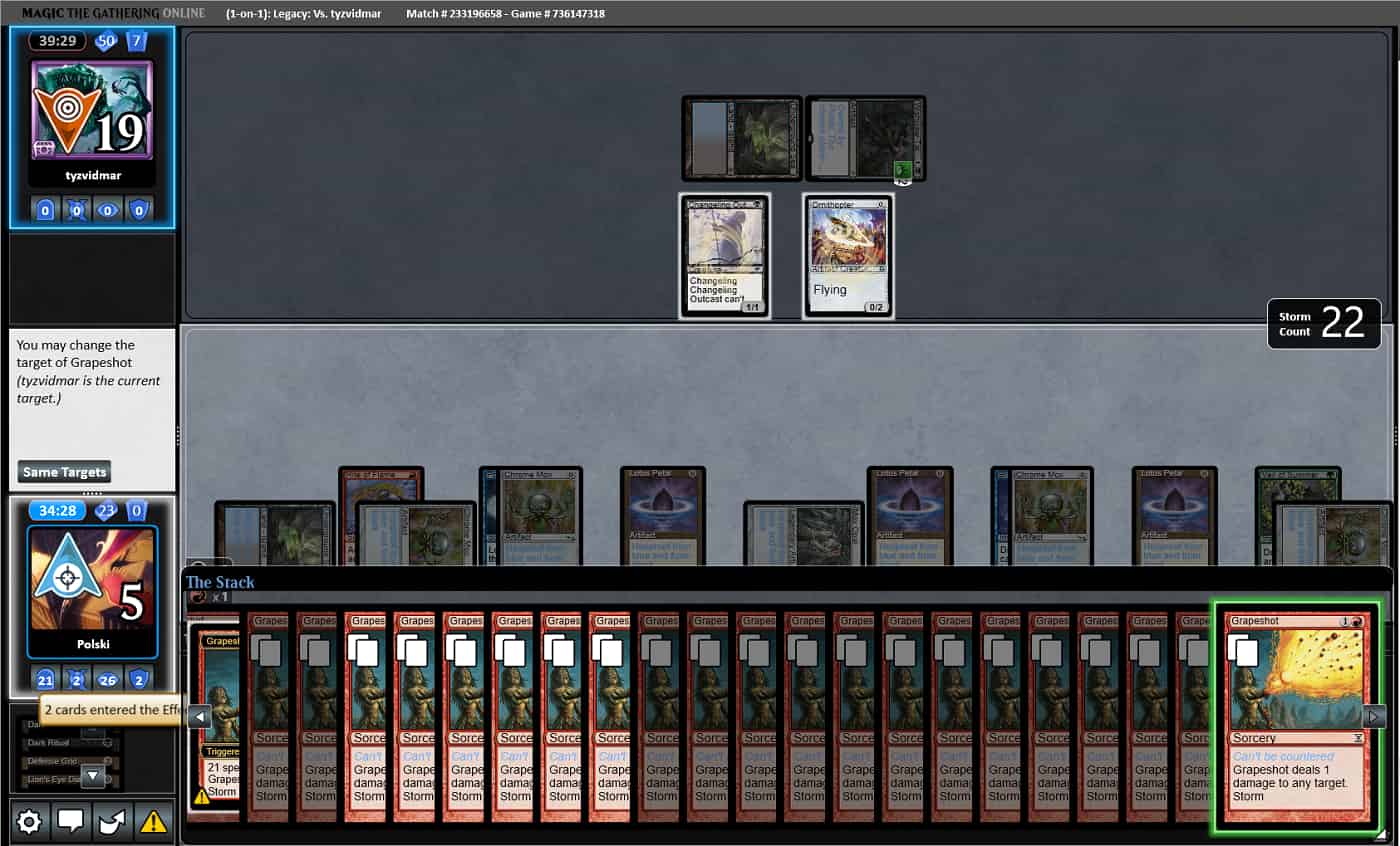 With all of the new cards being used in Legacy, it’s exciting to see what new decks form and how existing decks decide to use them. Because of this, it’s important we keep practicing and understanding our matchups inside and out. I hope you enjoyed this article, and I wish you the best of luck in your own testing!