BR Reanimator is an accurate name to describe this deck. It’s a red and black deck that’s trying to put a [[Griselbrand]] and other expensive creatures into play from the graveyard. It does this by using cards like [[Faithless Looting]], [[Entomb]], [[Reanimate]], and [[Exhume]]. By using cheap spells and rituals it can do this as early as the first turn. Once a [[Griselbrand]] is in play it’s quite easy to win the game by drawing many discard spells or reanimating another creature.

How does BR Reanimator matchup against TES?

[[Chancellor of the Annex]], [[Griselbrand]] – These are the main creatures that BR Reanimator is trying to reanimate. In this matchup, both of these creatures are hard to beat when on the battlefield. [[Griselbrand]] allows the opponent to draw lots of cards and then use discard spells to make it harder for TES to combo. [[Chancellor of the Annex]] making all of our spells cost extra mana, in order to not be countered, makes it challenging to win through. [[Chancellor of the Annex]] also has the additional benefit of when it’s in the starting hand making the first spell we cast cost more mana, or be countered. This is important because it gives the opponent a way to be disruptive on turn one when they are on the draw.

[[Thoughtseize]], [[Unmask]] – Discard spells from another combo deck is a great way to combat TES. Being able to take an important card from our hand can slow us down by at least a turn or two. Those additional turns will allow BR Reanimator to assemble their combo before TES. [[Unmask]] is uniquely good because it allows BR Reanimator to cast it after the opponent puts a [[Griselbrand]] into play and draws several cards. This significantly decreases our chances of winning once a [[Griselbrand]] is in play.

This matchup is much more than just two combo decks racing to their combo. Many games do come down to that, but there’s also plenty of interaction and room to outplay your opponent. The games that come down to just a straight up race are pretty unfavorable for TES. Reanimator has a much higher chance of being able to combo on the first or second turns. If they have a discard spell or a [[Chancellor of the Annex]] in hand, that’s just a bonus for them. TES has to worry about having a fast hand and being resilient to interaction where Reanimator just needs to worry about a fast hand. Reanimator plays up to eight discard spells and our copies of [[Veil of Summer]] can only be used to protect our combo and not disrupt theirs.

I expect the Reanimator opponent to mulligan every hand that can’t combo in the first or second turn. A fast combo will be their primary concern when evaluating opening hands. TES will be looking for something similar, a reasonably fast hand, but also taking into account if the opponent has a turn one discard spell or reveals a [[Chancellor of the Annex]].

Another important note is that if the opponent chooses to reanimate a [[Chancellor of the Annex]] it can easily be ignored by casting a [[Veil of Summer]], so it can’t counter any of the future spells for that turn.


There aren’t any cards in the sideboard that improves this matchup, so it’s best to keep the deck as is.

For the first game, I won the die roll and looked at my opening seven-card hand. If I didn’t know what my opponent was playing, I would have kept the hand. It had cantrips, lands, [[Rite of Flame]], and a [[Burning Wish]]. The problem was I didn’t think this hand was good enough against Reanimator. This hand was too slow and had no protection. With that in mind, I mulliganed for something better. 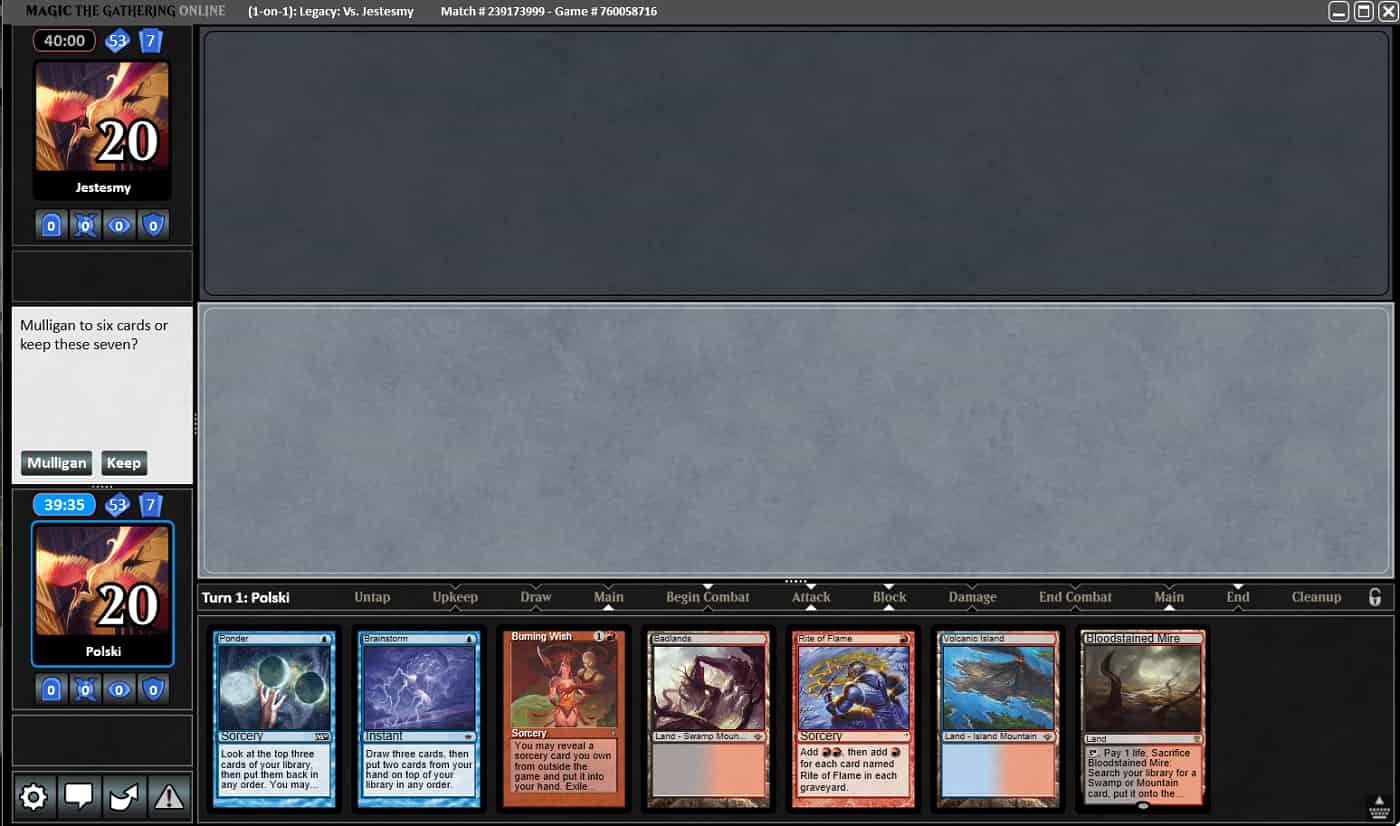 This six-card hand was a little better. It had lands, rituals, [[Brainstorm]], and [[Echo of Eons]]. This hand could [[Brainstorm]] on the first turn to protect key cards from a discard spell and find cards to combo faster. This had the potential of a turn-two kill, so I decided to keep it. I led off with a land and just passed the turn to my opponent. 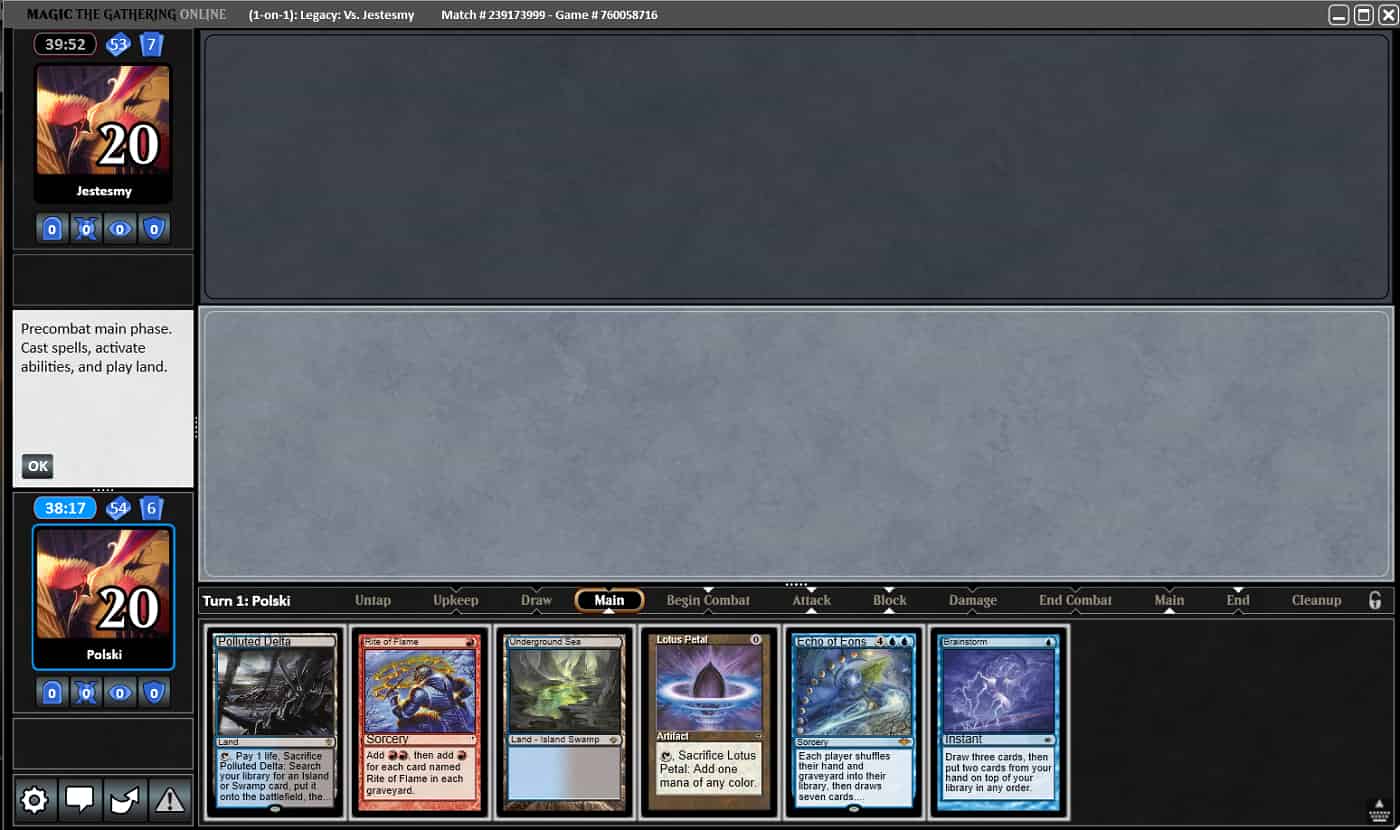 For my opponent’s first turn, they led off with [[Dark Ritual]] and [[Thoughtseize]]. I assumed that meant the opponent would be able to reanimate a creature this turn, so I cast the [[Brainstorm]] to see if I could find the resources needed to combo on the second turn and then put the most important cards on the top of my library so they don’t get discarded. Unfortunately, I just drew two copies of [[Defense Grid]] and [[Rite of Flame]]. 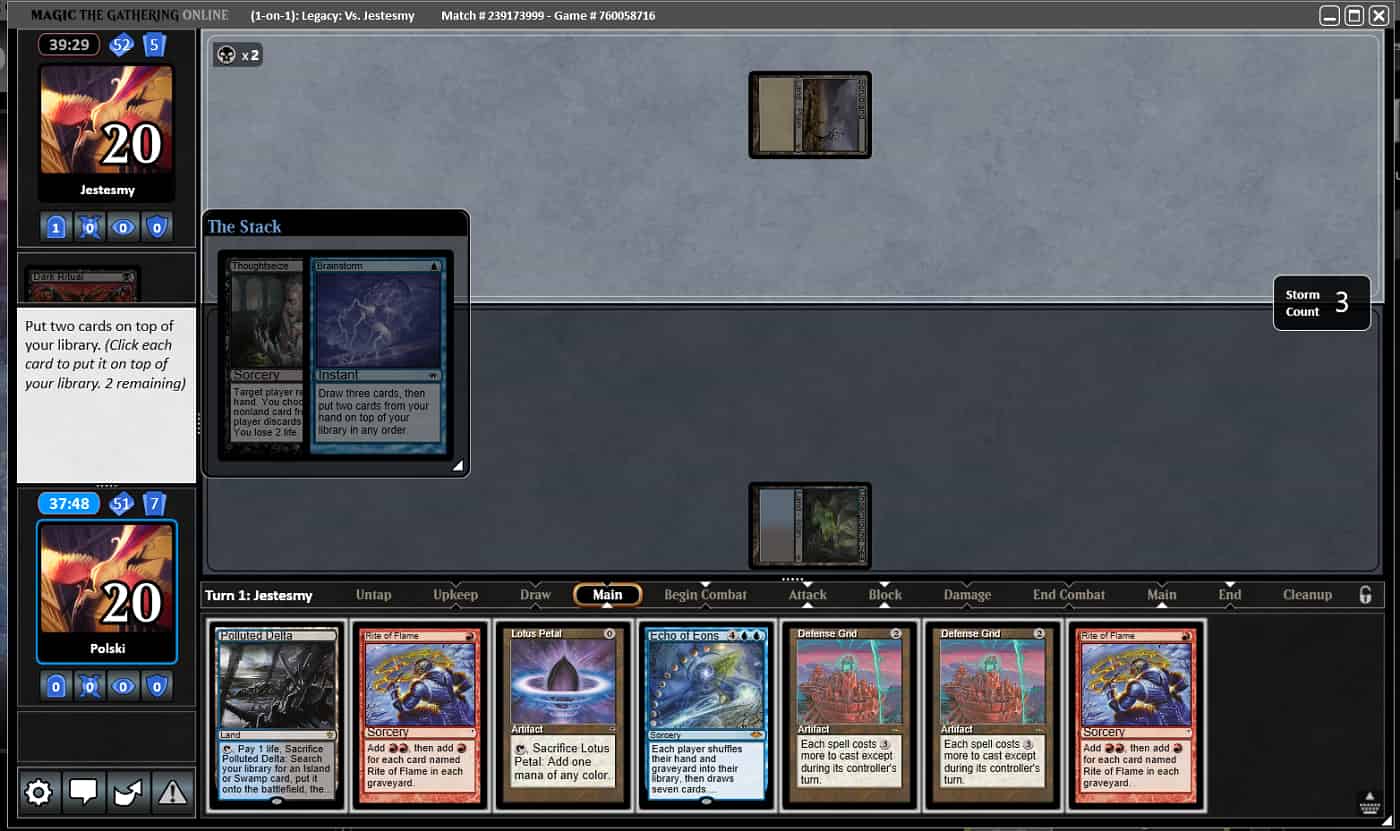 My opponent followed up with an [[Entomb]] and a [[Reanimate]] to put [[Griselbrand]] into play. Not a bad turn one. My opponent then drew seven cards and cast an [[Unmask]] to take a [[Rite of Flame]]. I drew my card for my next turn hoping it was a [[Lion’s Eye Diamond]] or a cantrip to find one, so I could put [[Echo of Eons]] into the graveyard and flash it back, but it wasn’t, and I conceded. 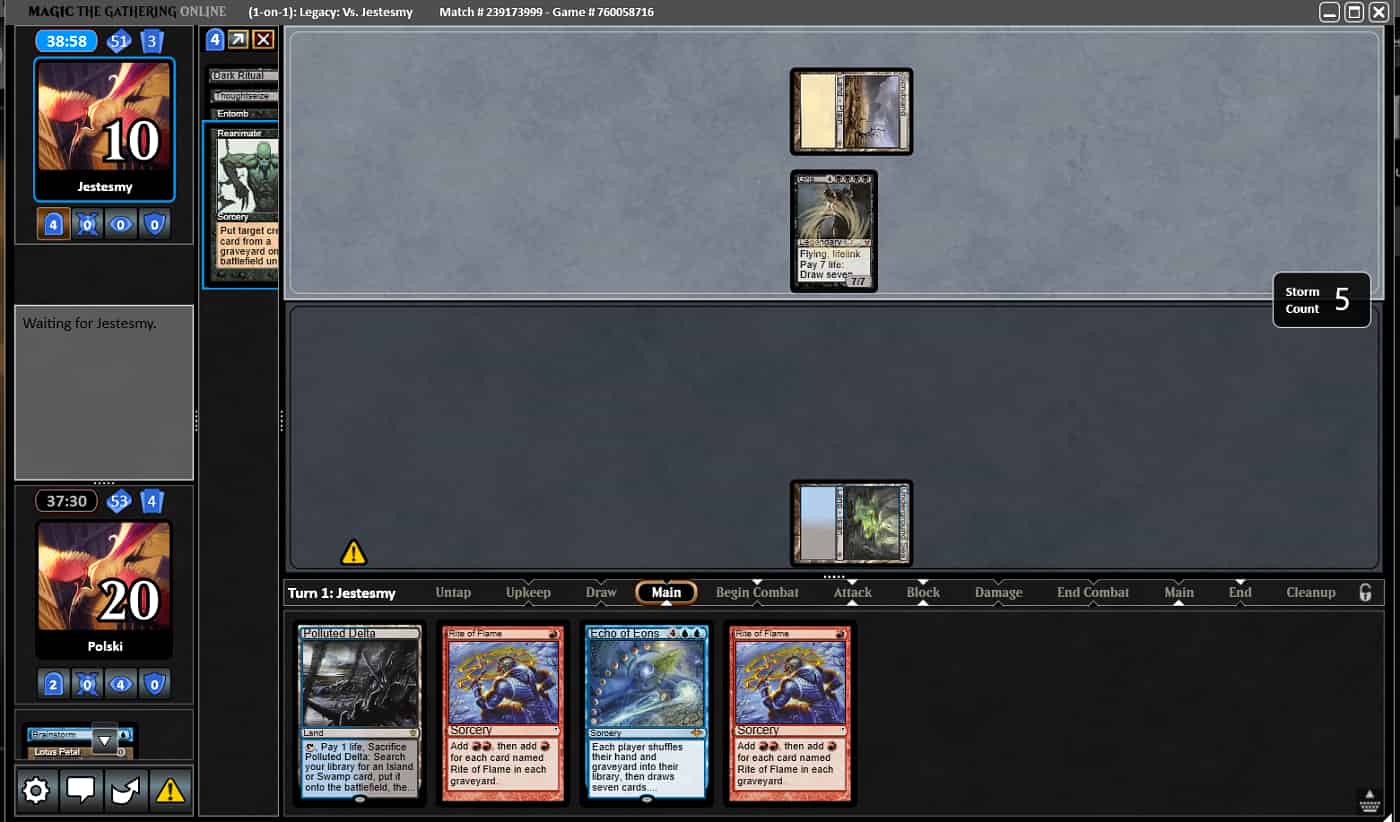 I don’t sideboard in this matchup with this decklist, so I just moved on to the next game as is. My opening hand had lots of mana and a [[Ponder]], so my plan was to turn one cast the [[Ponder]] and look for a tutor to float on the top of my deck to hide from a discard spell and then to try and win on my second turn. I also had a [[Lotus Petal]] that I could allow to get countered if my opponent revealed a [[Chancellor of the Annex]]. 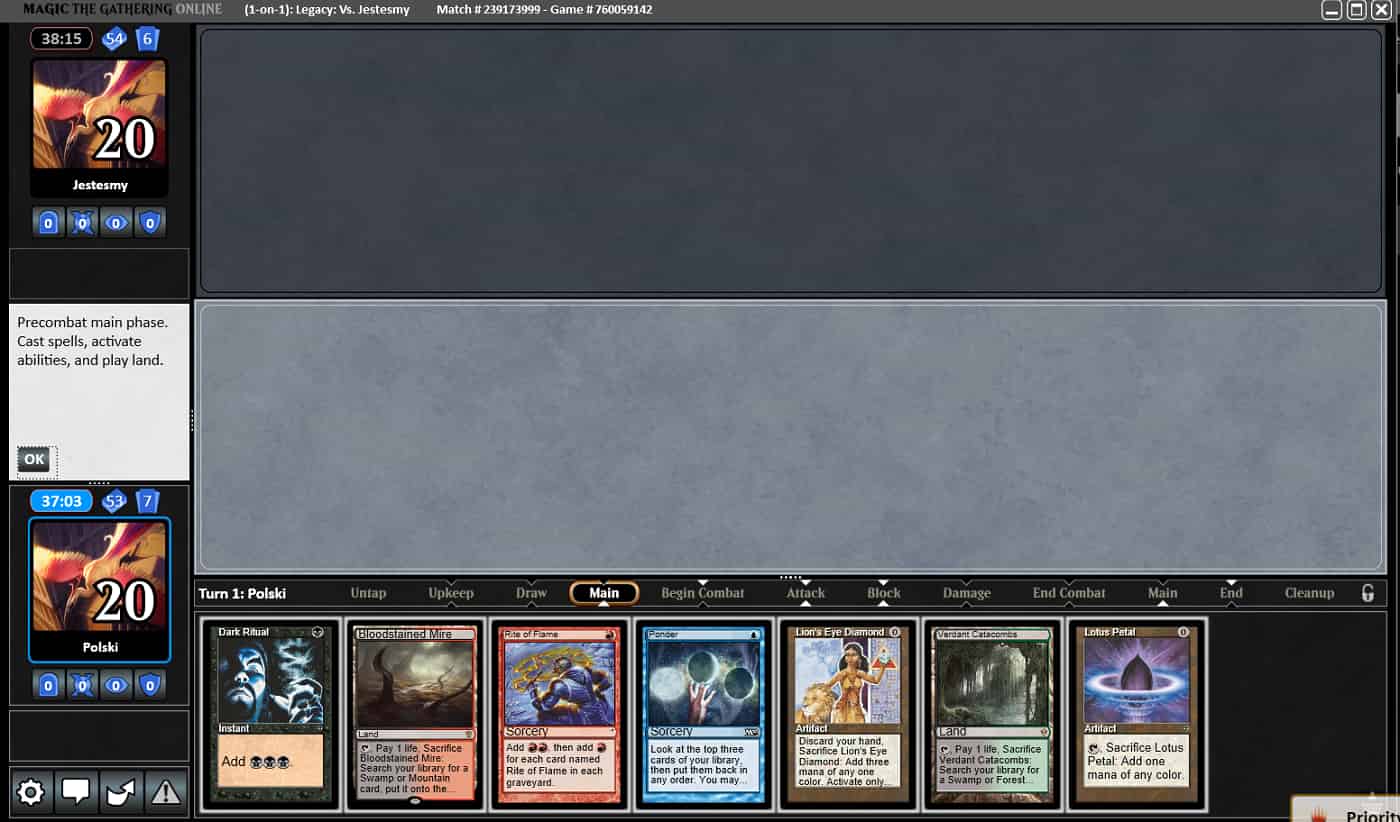 I started my turn off with the [[Ponder]], shuffled and then drew a [[Veil of Summer]]. I messed up here and should have played out the [[Lotus Petal]] to leave up the option of casting [[Veil of Summer]]. Thankfully, my opponent didn’t have one and just played a [[Swamp]] and passed the turn. I thought that meant they had an [[Entomb]] and would try to reanimate a creature on their next turn. I knew I would have to get a lucky draw for my turn in order to combo. I took my turn and drew an [[Echo of Eons]]. 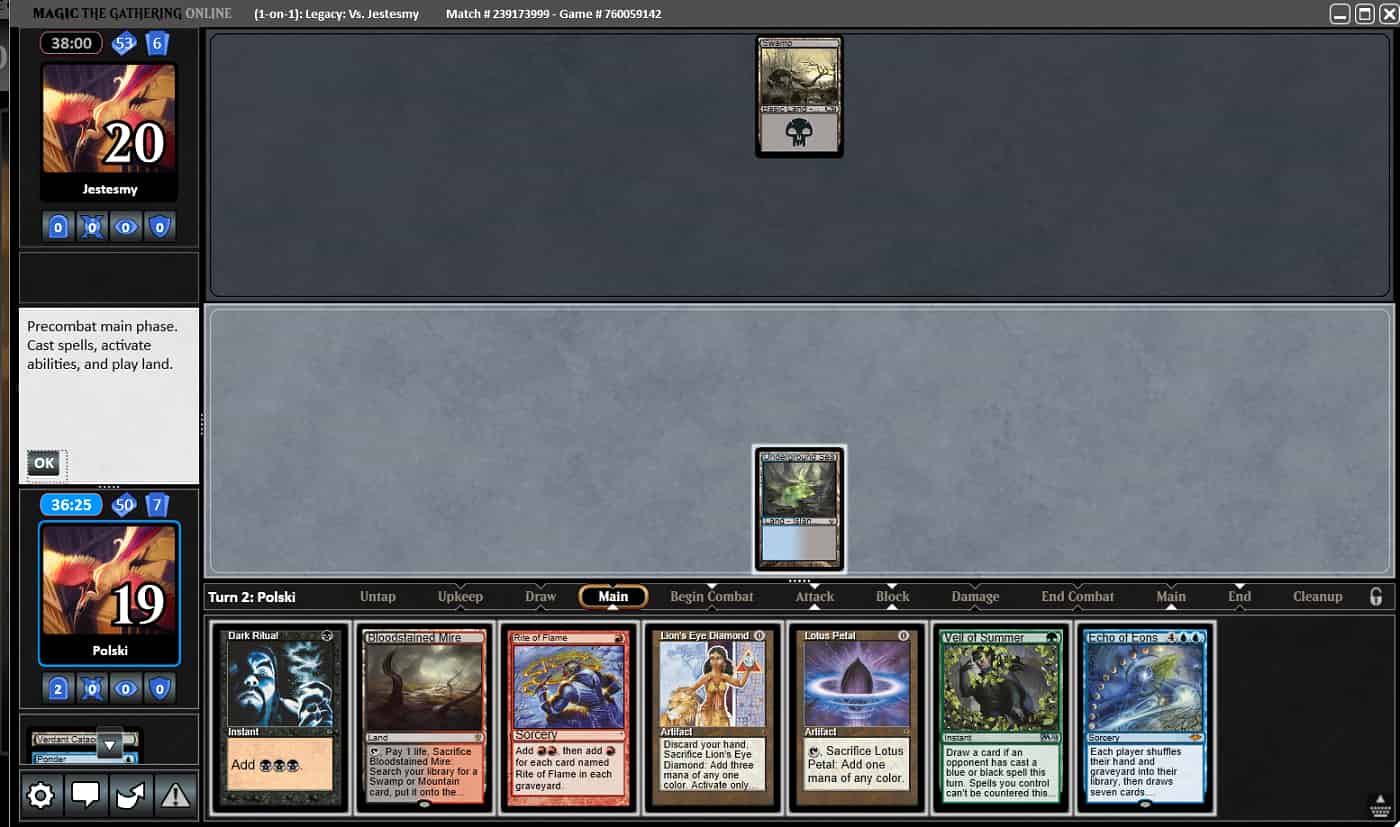 That was just what I was looking for. I floated all of the mana from the lands and rituals, and used [[Lion’s Eye Diamond]] to flashback [[Echo of Eons]]. With lots of mana floating I would just need to find a tutor effect. The seven cards had more mana, [[Burning Wish]], and an [[Ad Nauseam]]. Being at a high enough life total, I chose to cast [[Ad Nauseam]], and I was able to generate enough storm to [[Burning Wish]] for [[Tendrils of Agony]]. 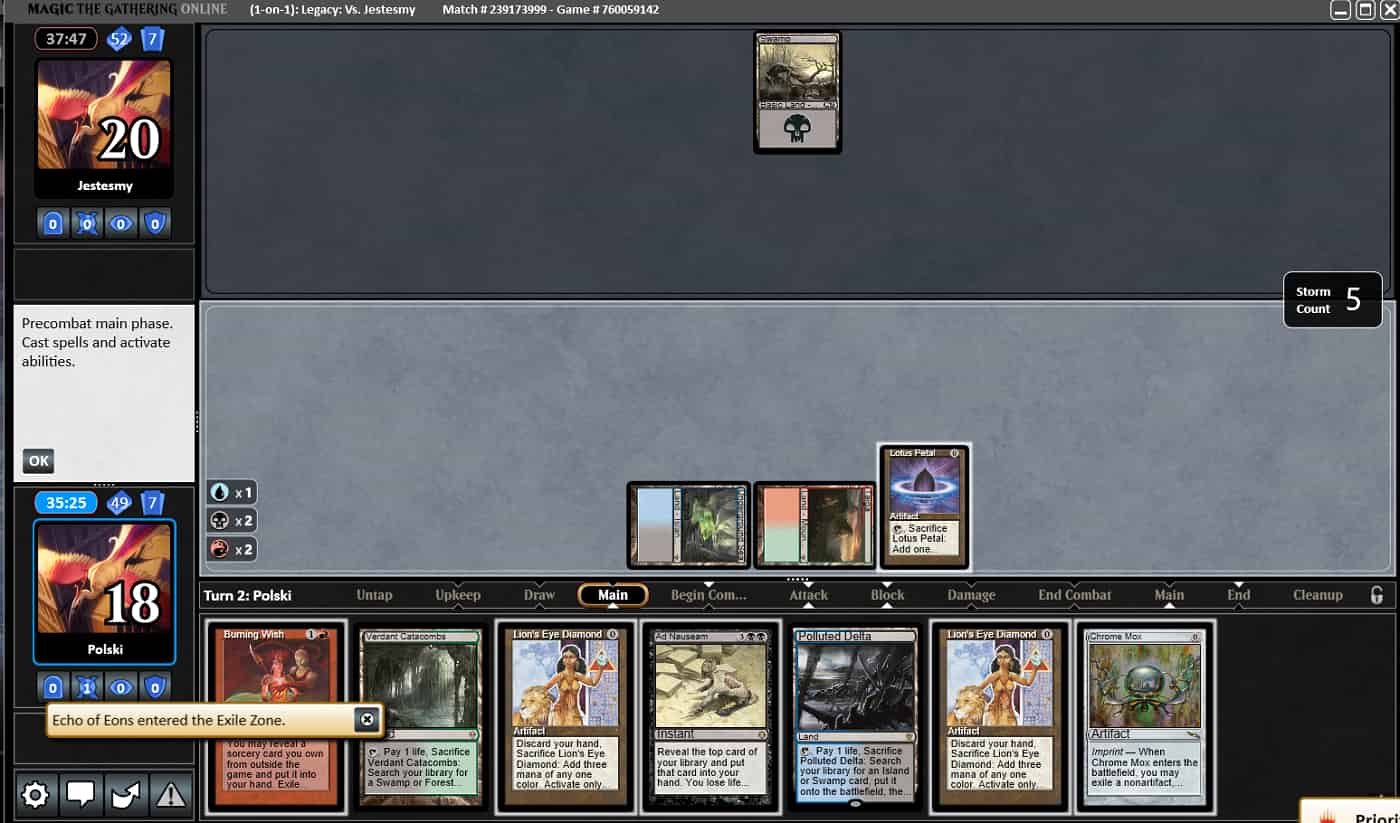 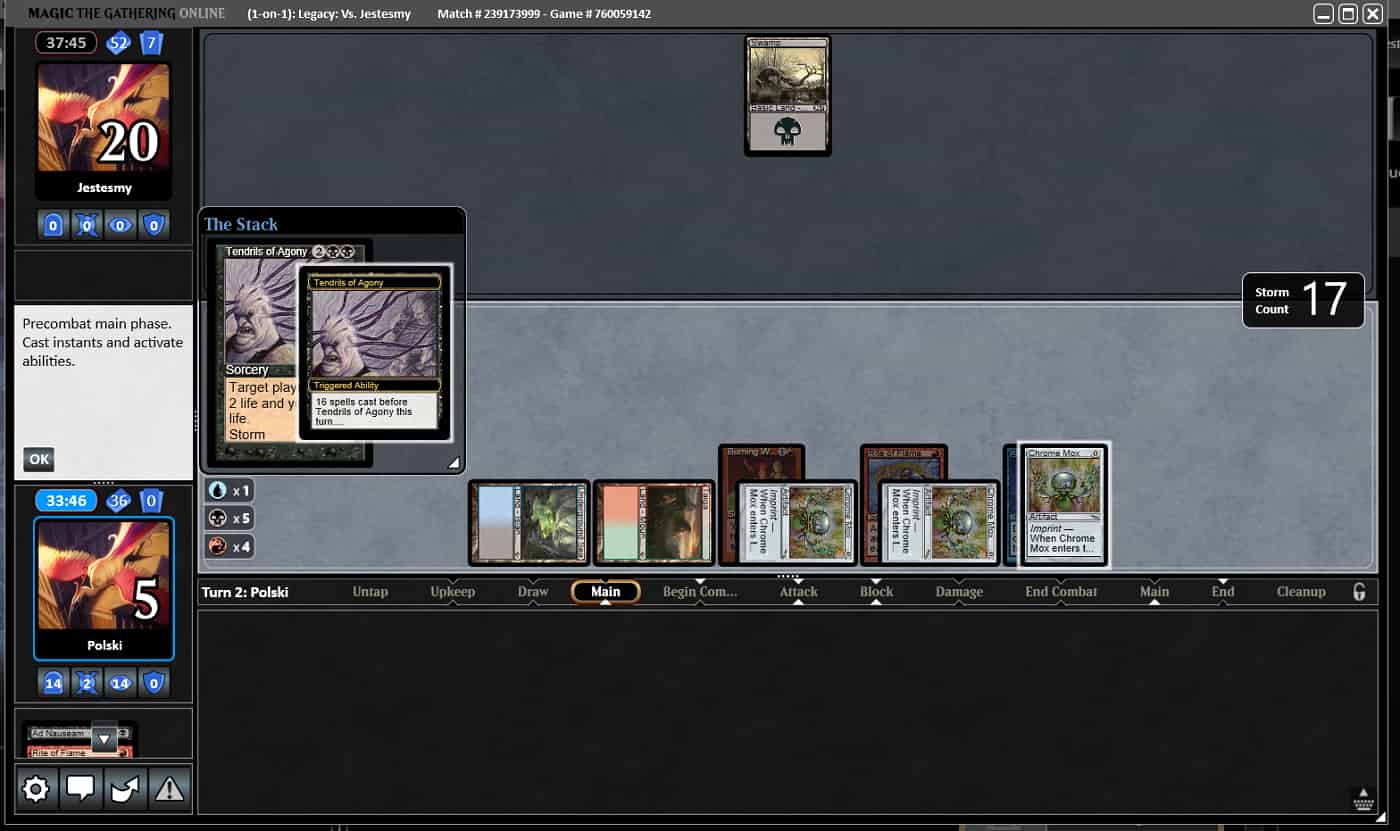 At the start of the third game I felt very confident. My opponent had mulliganed down to four cards, and I had six that had the potential of a turn two or three combo through a discard spell. My opponent started their turn by using all four of their cards, [[Swamp]], [[Dark Ritual]], [[Entomb]], [[Exhume]] – the perfect hand. The opponent then proceeded to draw many cards and cast two copies of [[Unmask]]. After their turn, I drew my card for the turn and just conceded. 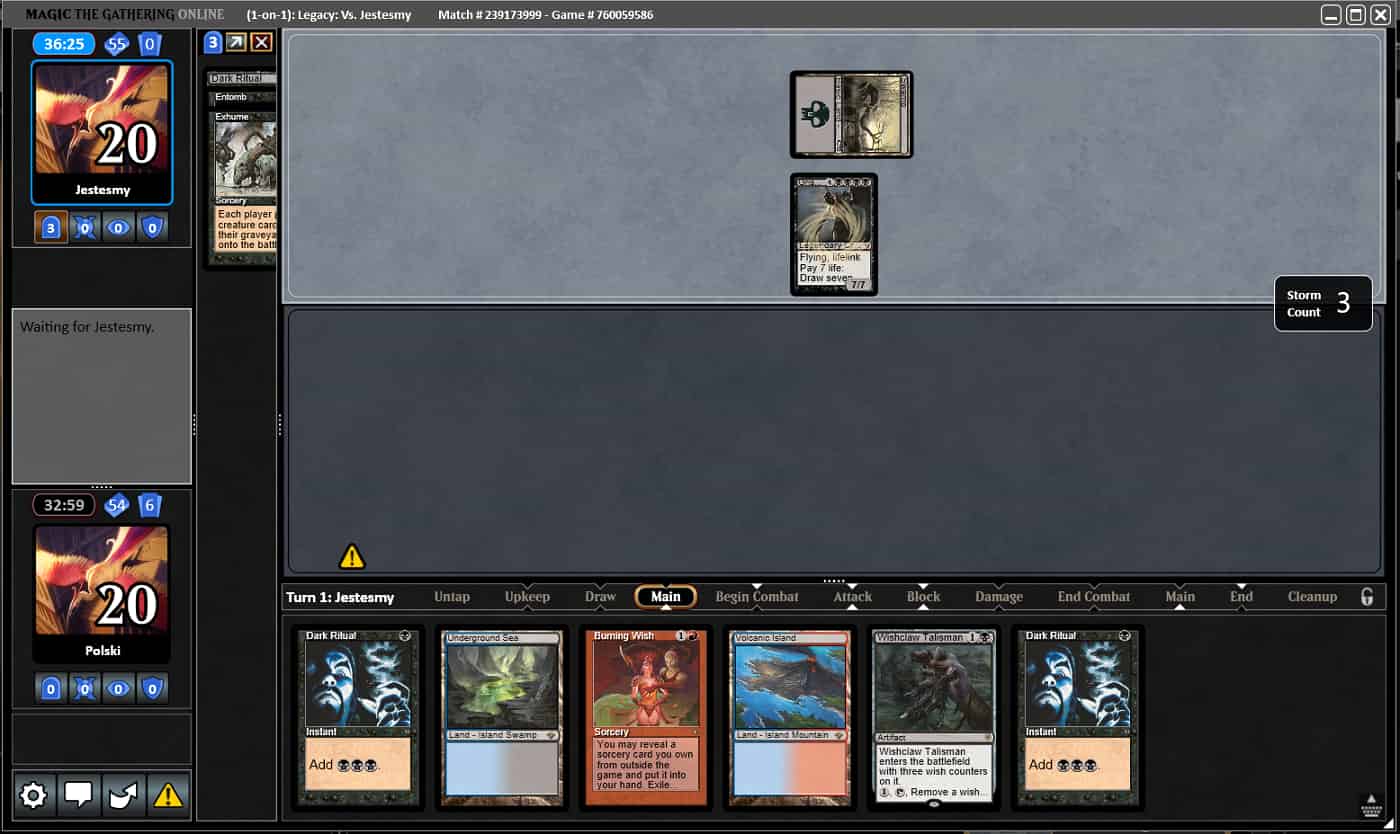 This third game is a great demonstration of how the opponent is favored, in my opinion. They have the luxury of just mulliganing until they find a hand that can win on the first or the second turn without fear of a discard spell or counter spell from TES.

Overall, this is not a matchup I would like to see, especially without discard spells of our own. [[Veil of Summer]] is nice, but the fact it only helps with protection and not disruption is a big deal. This is one of those matchups that always keeps me on the edge of my seat wondering if they’ll reveal a [[Chancellor of the Annex]], play a discard spell, or just put a [[Griselbrand]] into play on the first turn on a mulligan to four. Reanimator decks have existed in legacy for a very long time and I expect it to stay that way, so it’s important we continue to practice and analyze the matchup. I hope you enjoyed this article, and I wish you the best of luck in your own testing.