Every once in awhile it is a good idea to do a mental breakdown and matchup analysis of some of the key matchups that we are likely to play against in a tournament. The metagame is always shifting and decks are getting new toys to play with, and now it’s Death & Taxes (D&T) who has gained some great additions to their deck. Just understanding the key players in a matchup from both decks perspectives and understanding our role in the matchup will not only make us a better player in terms of our record, but will also make us a smarter player. Since the printing of Sanctum Prelate and Recruiter of the Guard I feel it is a good idea to reevaluate this matchup since Death & Taxes has adapted these cards, and its popularity has risen in attendance.

How do these additions to D&T affect the matchup against TES?

Sanctum Prelate – One of the best tools for this deck against combo decks. Against TES the most common numbers to name are two and four. This will shut off primary cards like Burning Wish, Infernal Tutor, Abrupt Decay, Grapeshot, Massacre or our win conditions in both Empty the Warrens and Tendrils of Agony.

Thalia, Guardian of Thraben, Ethersworn Canonist – These are the cards that make turn two the critical turn. These cards will require an answer as it is very unlikely to win with one of these in play. Thankfully we have Cabal Therapy and plenty of answers if they were to resolve, but once resolved it will more than likely slow us down by a turn or two as we try and answer them.

Wasteland, Rishadan Port – Beating these type of cards is going to be more about your skill in legacy and not so much about the matchup in particular. Some hints to beating these cards is fetching the basic Swamp if you can afford to. That is why it is there, but not all hands allow you to do this, so making this evaluation of when you can afford to will be key in beating Wasteland in all matchups that have it. Rishadan Port is less good and easier to beat because if the opponent is porting us then they aren’t playing any hate creatures and that is good for us. We can also afford to leave fetch lands untapped until the time we are going off to nullify Rishadan Port.

Killing Them – TES is just a very fast deck and is good at doing it. We can easily win a lot of games on turn one and turn two on the play where the opponent just can’t interact. There is nothing the opponent can really do before turn two that interacts with us, so it doesn’t matter how many hate cards the opponent has in hand if we can just win before any of them are castable. This includes Empty the Warrens and Tendrils of Agony.

Grapeshot, Massacre – When playing with Burning Wish in our main deck we get access to two of these varied answers to any of the creatures they may play.

Abrupt Decay, Chain of Vapor – Our post board answers that we can bring in for the matchup. Abrupt Decay is a nice clean answer to any threatening creature, and Chain of Vapor will clear the way for our combo turn which is all we really need.

Turns two and three are the fundamental turns for both players in this matchup. What we do and what they do on turn two will usually determine who wins the game a lot of the time. All of their main hate cards are two and three mana and those are the same turns where we will be winning the game or casting removal spells. They are also the turns with the most decisions where you may have to decide to hedge with casting a Burning Wish, playing around Rishadan Port and Wasteland, using discard like Cabal Therapy and the big game changing decisions. I think this is a pretty good and close matchup because both players have a lot of great cards for the opponent, but what gives the edge to TES is the ability to win a lot of games before the fundamental turns. We can easily win the game turn one on the draw or turns one or two on the play before any of their hate cards come down.

On the draw I side out Ponder because there just isn’t the time to be casting cantrips and setting up. The opponent is going to playing their hate bears starting on the second turn of the game and I want as many answers to these threatening cards as possible, which is why I board in Abrupt Decay, Chain of Vapor, and Grapeshot. Trying to win before they come down is possible, but not reliable because that means comboing off on exactly turn one. Duress also gets boarded out because their disruption is in the form of creatures and not spells, this makes an easy swap out.

This is more of a preference way of sideboarding and I often change my mind on this, but this strategy has been what I have been doing as of late. The reason I leave my copies of Abrupt Decay in the sideboard is because the chances of winning before their disruptive creatures are cast is much higher. We can now combo on our turns one or two and I want to have the highest probability of doing that instead of trying to find/have an answer for their disruption. Ponder helps do this because we can either combo on turn one or cast Ponder to setup for a turn two kill. This plan also lowers the average converted mana cost of our deck for Ad Nauseam. Because this is just my preference you could also board the same way as on the draw and be just fine. 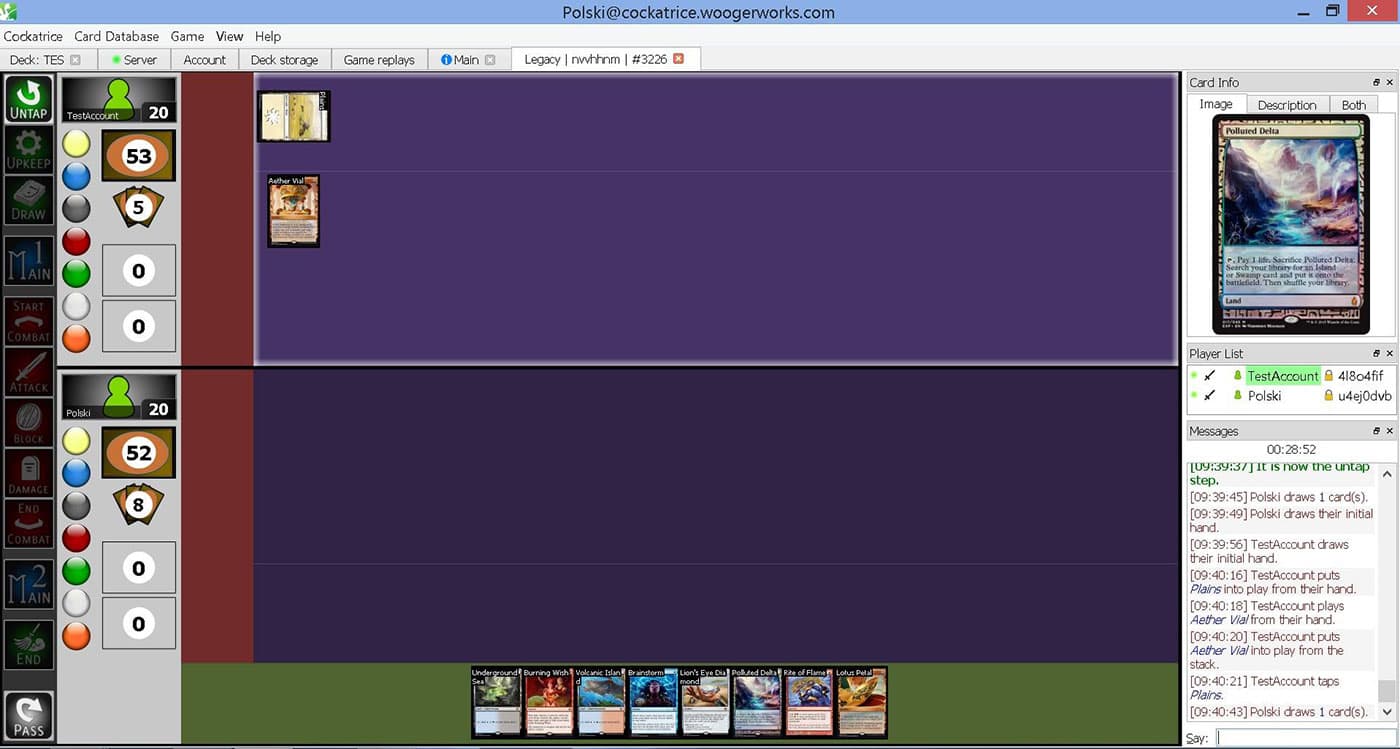 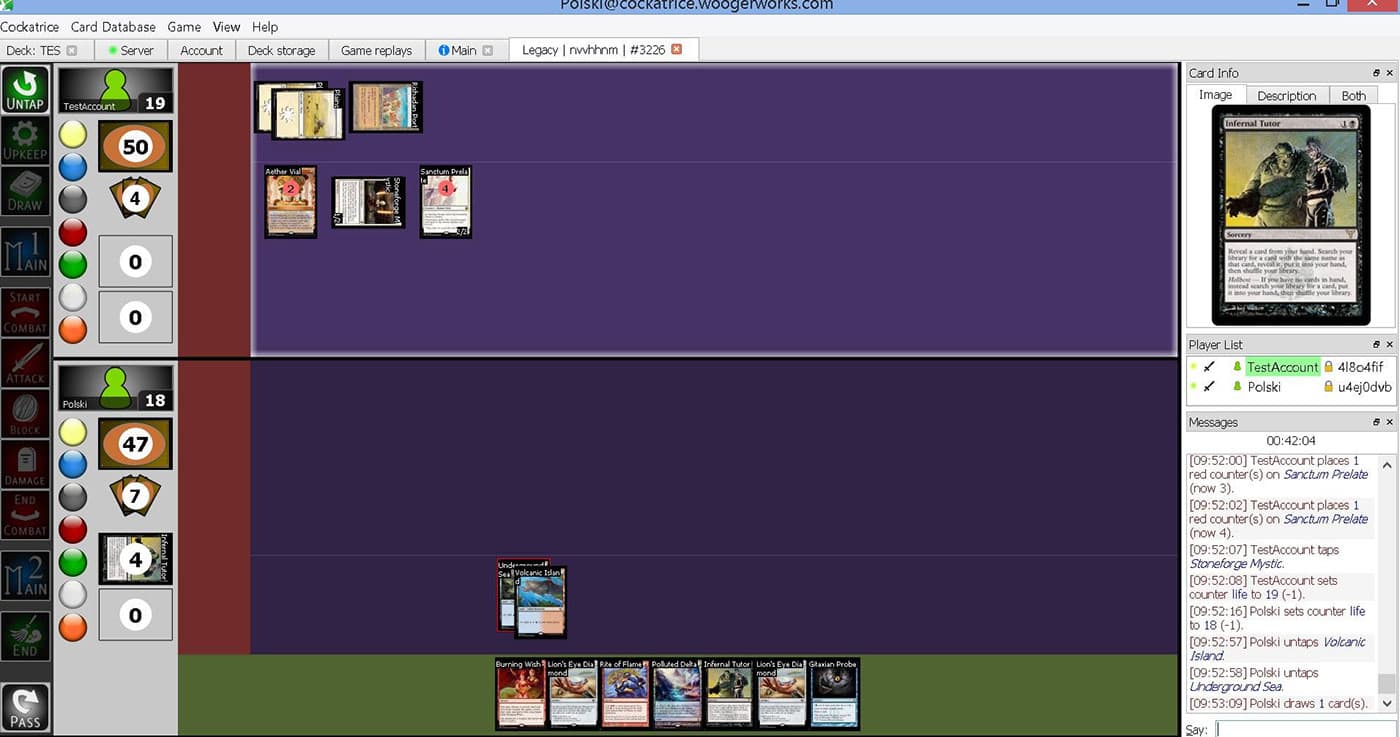 This was another interesting game state I was in where I didn’t know what my opponents had was. It was game one with my opponent having a Rishadan Port in play with a Sanctum Prelate on four, a Stoneforge Mystic that fetched up a Batterskull, and AEther Vial on two. The Sanctum Prelate shuts off Empty the Warrens, Massacre and Tendrils of Agony, so since this was game one the only way to remove it would be to Burning Wish for Grapeshot. The previous turn I could not go off and cast an Infernal Tutor for another Lion’s Eye Diamond. 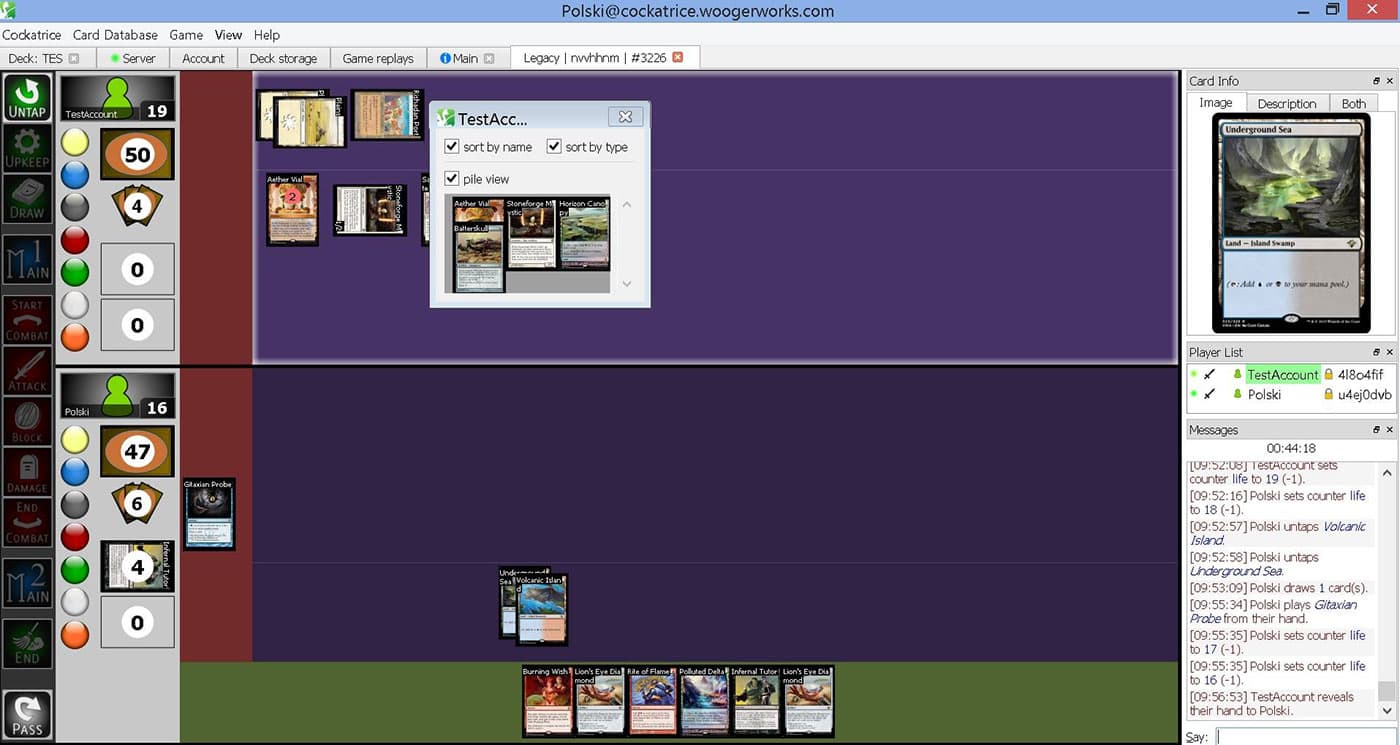 After I cast Gitaxian Probe my opponent revealed AEther Vial, Batterskull, Stoneforge Mystic and Horizon Canopy. No real other hate here, but my opponent can vial in another Stoneforge Mystic at the end of the turn and search up another equipment, so I am taking Empty the Warrens off the table as a way to win this game. I drew Ponder off the Gitaxian Probe. I decided I could wait a turn on trying to go for the win and that I would just cast the Ponder, keep the best card and then shuffle the other two away with my Polluted Delta, and then cast the Burning Wish for the Grapeshot and just passing the turn. My Ponder revealed Dark Ritual, Lion’s Eye Diamond and Lotus Petal. 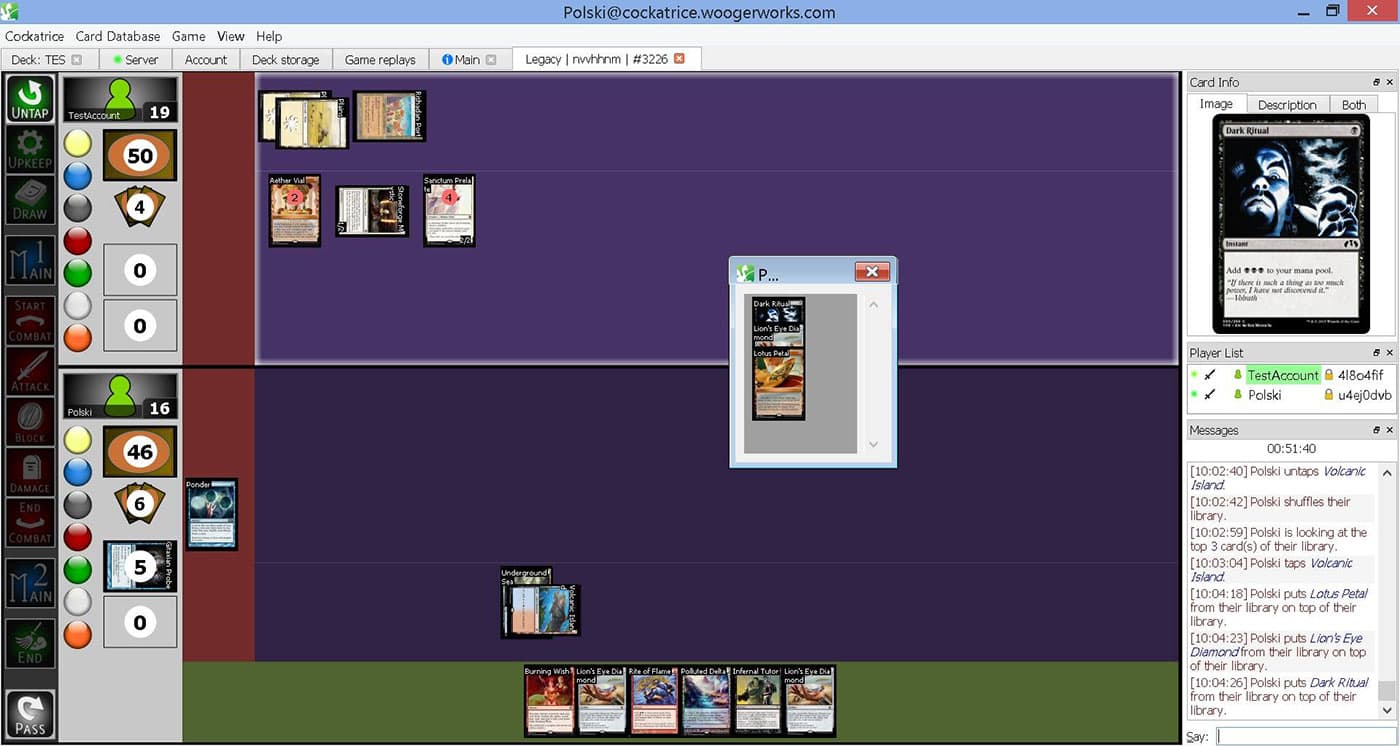 Seeing all of this mana made me second guess myself on whether I wanted to crack this fetchland or not because it was such a good Ponder. I ended up taking the Lion’s Eye Diamond, fetching Underground Sea with my Polluted Delta and then cast Burning Wish grabbing the Grapeshot and passing the turn. The opponent, as expected, did his Stoneforge Mystic line, drew his card, played his Horizon Canopy and just passed the turn. On my upkeep he ported my Volcanic Island and I immediately drew a fetchland. Any mana source would have worked and that one counts, so I cracked it for another Volcanic Island and cast Rite of Flame and then Grapeshot targeting the Sanctum Prelate for 2. I played my all copies of Lion’s Eye Diamond from my hand and then tapped my other two lands for Infernal Tutor. Holding priority I cracked all 3 copies of Lion’s Eye Diamond for 3B 3R 3U and cast Infernal Tutor for Ad Nauseam. After casting it I had 2B 1R 1U floating and that was enough to win the game.

In this matchup can be very tricky to play because it is pretty delicate. The opponent is trying to prevent us from casting spells with two and three mana creatures backed up by their interactive lands. Winning before their fundamental turn two is always an option and something we should look to capitalize on because of their lack of counterspells.

The main takeaway from this is that there is quite a bit of value from going back and reevaluating popular matchups. Even if you have played it quite a bit things change and decks get new toys and it can really impact the sideboard plan and even mental plan on how to approach a matchup. This is just not a strategy for TES or for legacy, but can be applied to any format or any deck.