The [[Doomsday]] deck has been around for many years with several different variations. It has won with cards like [[Tendrils of Agony]] and [[Laboratory Maniac]], but with the recent printing of [[Thassa’s Oracle]], it has since taken that spot as the best win condition. The goal of the deck is cast [[Doomsday]] and then stack the five-card library with mana, cantrips, and then win the game with [[Thassa’s Oracle]]. [[Doomsday]] uses discard spells and counterspells in order to protect the combo and to prevent the opponent from winning before that turn. Another card that has really helped put [[Doomsday]] back on the map is [[Teferi, Time Raveler]]. [[Teferi, Time Raveler]] in play means it’s safe to combo off knowing that the opponent can’t cast any spells to disrupt. It also helps remove any permanents in play that may be preventing the combo. Throughout Legacy’s history, [[Doomsday]] has been known as one of the most complex decks to play, but with [[Thassa’s Oracle]] I think it has gotten much easier to play and has become a better deck. With the recent success of [[Doomsday]], we can expect it to remain a top contender. We need to be prepared for this matchup and have a plan on how to beat it.

How does Doomsday matchup against TES?

[[Doomsday]], [[Thassa’s Oracle]] – These are the cards that create the combo. It seems pretty simple to cast [[Doomsday]], make the library five cards and then cast [[Thassa’s Oracle]] to win the game when the library is small enough. It sounds easy, but can be quite tricky to execute in knowing what to put in the other four cards. It is usually comprised of mana, cantrips, and maybe even discard. [[Doomsday]] is a turn or two slower than Storm decks but has a draw of being a one-card combo that needs much fewer resources to combo off.

[[Thoughtseize]], [[Force of Will]] – This is the interactive part of the deck that [[Doomsday]] uses to both protect their combo and prevent the opponent from winning if they are a faster deck. [[Doomsday]] isn’t the fastest combo deck in the format. These cards are pretty important against The EPIC Storm because it allows them to slow us down enough to give them the turns they need to combo off. Not too many combo decks in Legacy have access to both counterspells and discard spells, so playing against both and knowing the opponent can combo if we aren’t fast enough can be tricky.

[[Counterbalance]] – Out of the sideboard, [[Doomsday]] has access to [[Counterbalance]] to have a permanent form of counterspells against combo decks and to disrupt decks like Delver that have a lower average converted mana cost in their deck. Combined with their many cantrips this will make it difficult to win.

This matchup is all about the earlier turns of the game. With both decks being able to win in a single turn, passing the turn can be dangerous. It’s also crucial in this matchup to not be too quick because [[Doomsday]] has many counterspells and discard spells, so running straight into a counterspell here could result in losing. There is a lot of maneuvering between counterspells, discard spells, [[Defense Grid]], and [[Veil of Summer]]. For two decks trying to race there’s a lot of interacting and protecting the combo. The best way to win this matchup is to have a quick hand with at least one form of disruption. We are the faster deck and need to take advantage of that and try to win before the opponent gets several turns. They play many counterspells and can easily have 15-plus cantrips in their deck. These cantrips will allow the opponent to continualy find those counters and sculpting their hand to win the game. The longer the game goes, the less likely we have a chance of winning.

In this matchup, there isn’t much sideboarding. Things will change as we try [[Lurrus of the Dream-Den]]. With this current decklist, I would remove one [[Chain of Vapor]] because the opponent isn’t really fighting us or trying to win with permanents. I would add the extra [[Thoughtseize]] because it is both proactive at trying to protect our combo and reactive for trying to slow the opponent down for comboing. If the deck moves to utilize [[Lurrus of the Dream-Den]] and [[Hope of Ghirapur]] in the sideboard, those two will be great in this matchup to try and lock the opponent out by reusing [[Hope of Ghirapur]]’s ability every turn. 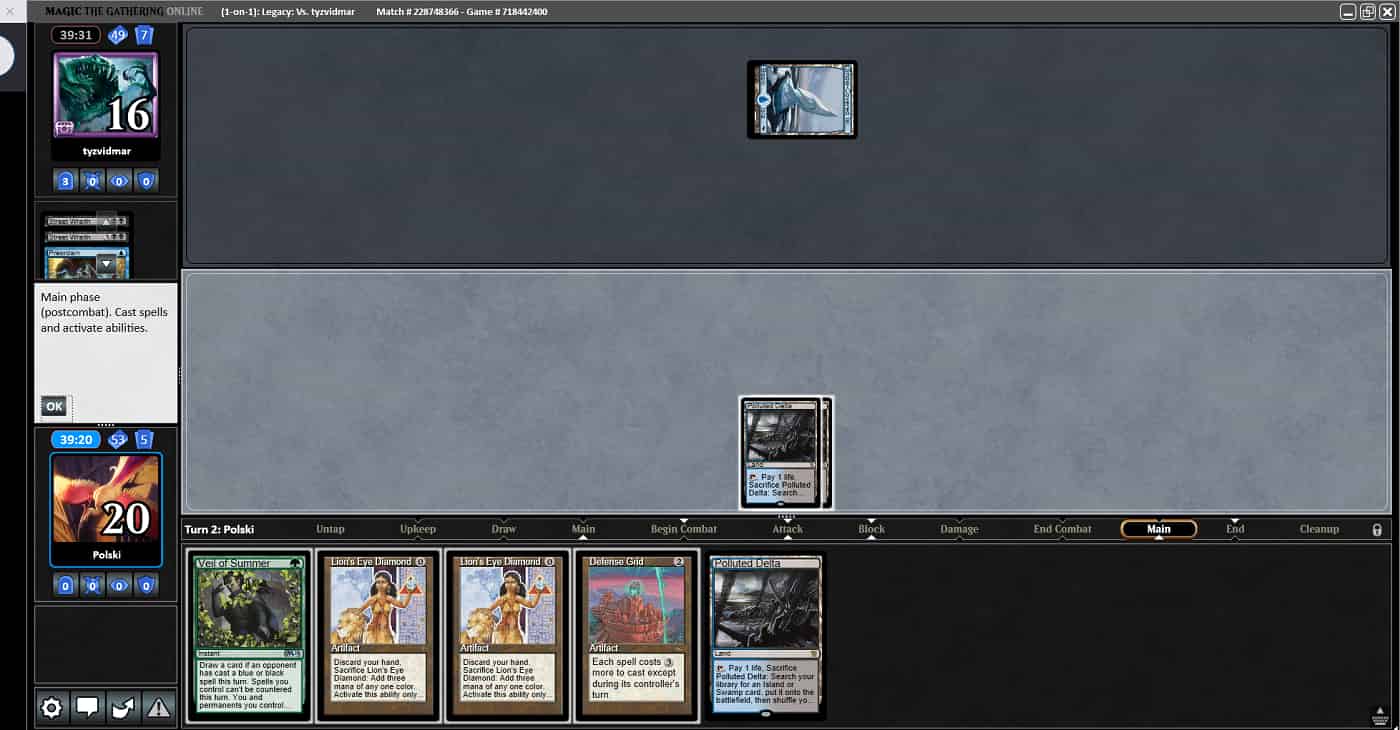 On my third turn, I drew a [[Dark Ritual]] and went for that exact line. [[Defense Grid]] was targeted with a [[Force of Negation]], and I used my [[Veil of Summer]] to protect it. For the draw step, I drew [[Burning Wish]]. I was not able to combo off this turn, so I just had to pass back and try on my fourth turn. 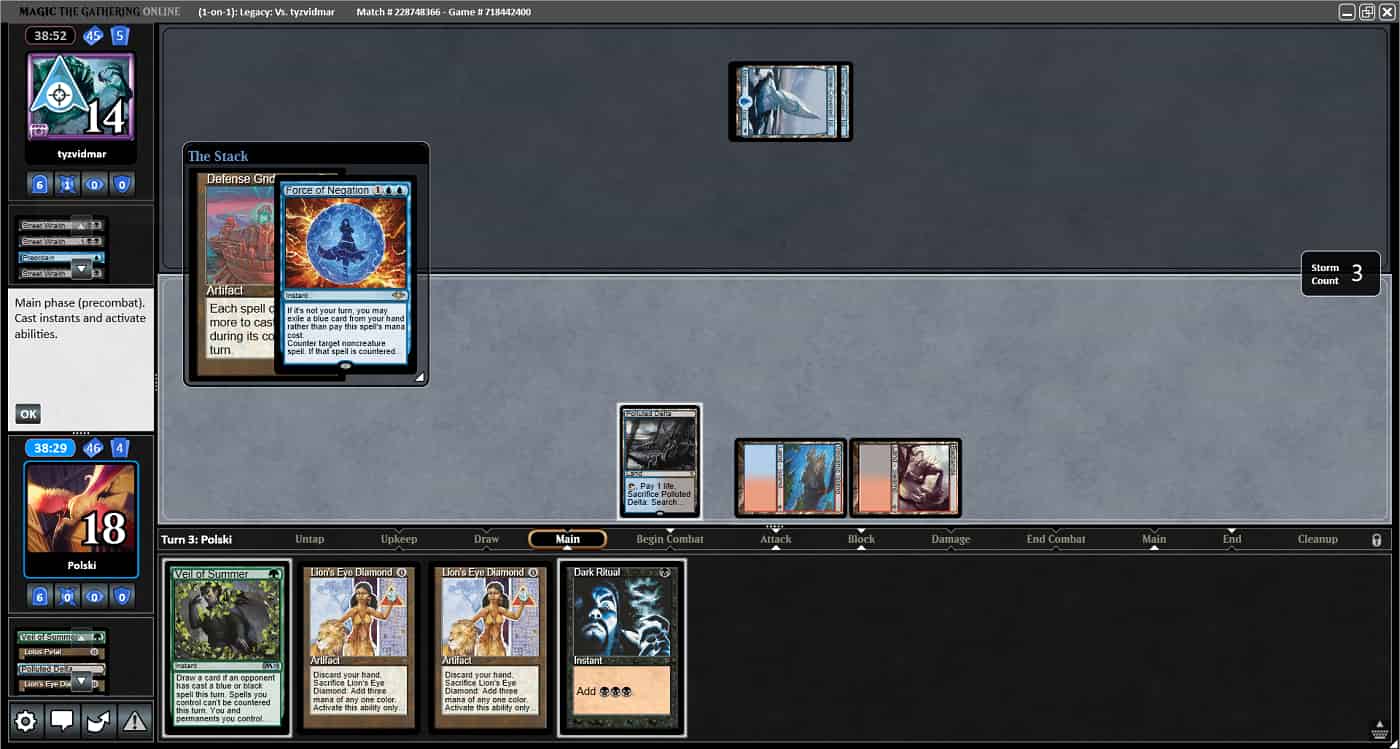 On the opponent’s third turn, they cast a couple of cantrips to set up their combo and then [[Dark Ritual]] to cast [[Doomsday]]. Fortunately for me, they were in a situation where they were not able to win on that same turn. As such, the opponent made a pile that involved passing the turn back. 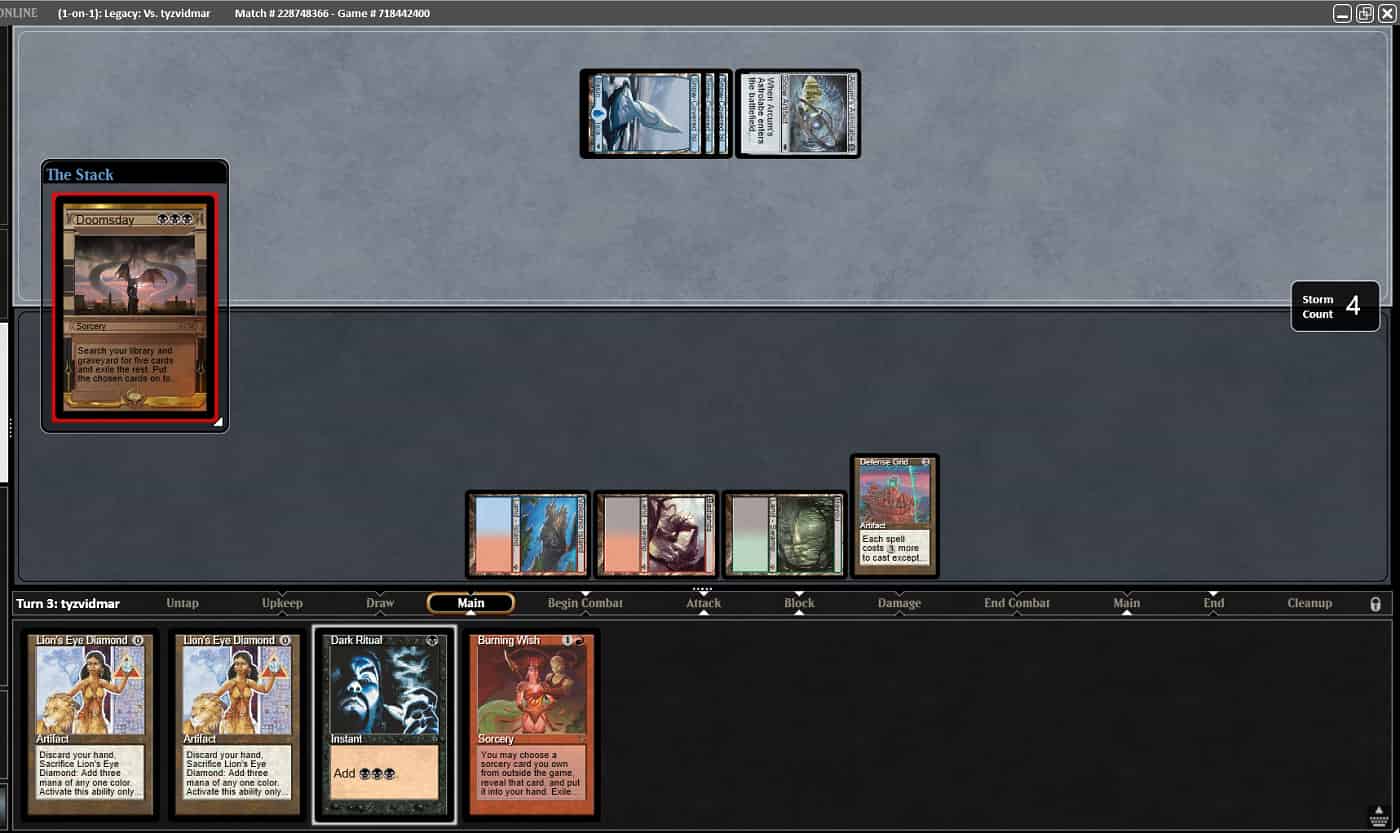 One of the parts of [[Doomsday]] that most people forget is that it costs half of your life total. This means I only needed half as much Storm to be able to win the game. With the four cards in my hand, that would be enough to win with [[Tendrils of Agony]]. 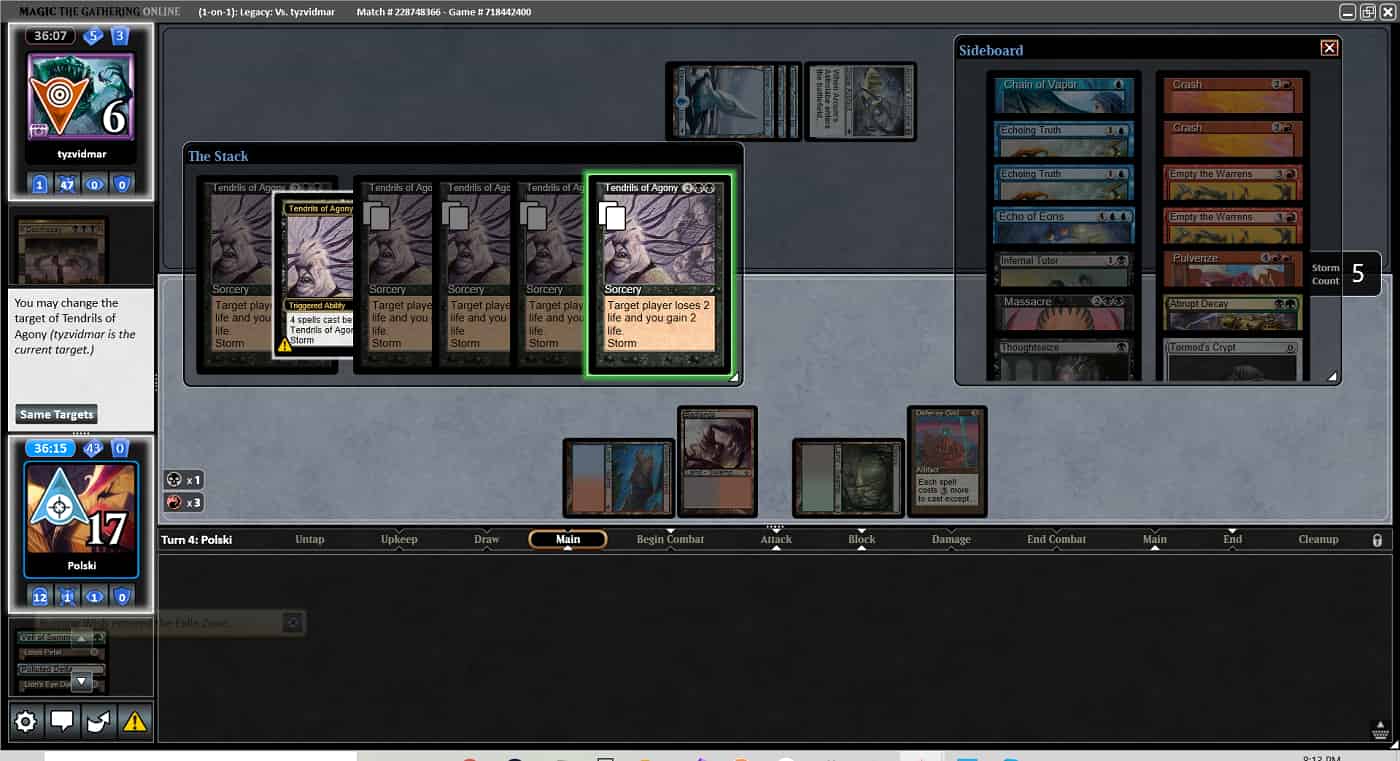 For the second game, I was on the draw and kept my opening seven. On my opponent’s second turn, they cast a [[Preordain]] looking for lands and had to put both on the bottom of their deck. They just passed the turn back missing their second land. On my second turn, I had the option to play my second land and then cast [[Rite of Flame]] and [[Dark Ritual]] for [[Ad Nauseam]]. The downside is that I knew my opponent had [[Force of Will]] and [[Force of Negation]] in their deck, but I sensed weakness in their hand from missing land drops. If the [[Ad Nauseam]] resolves, I probably would just win the game on the spot. If it got countered, however, I think I had enough resources left over, with two lands, a [[Ponder]] and a [[Burning Wish]], that I could try again in a couple of more turns. I could also use the [[Ponder]] this turn to try to find some protection for the following turn. I wasn’t sure what the best play was, but ultimately I decided to just go for the combo here, and [[Ad Nauseam]] resolved. It was good enough to win. 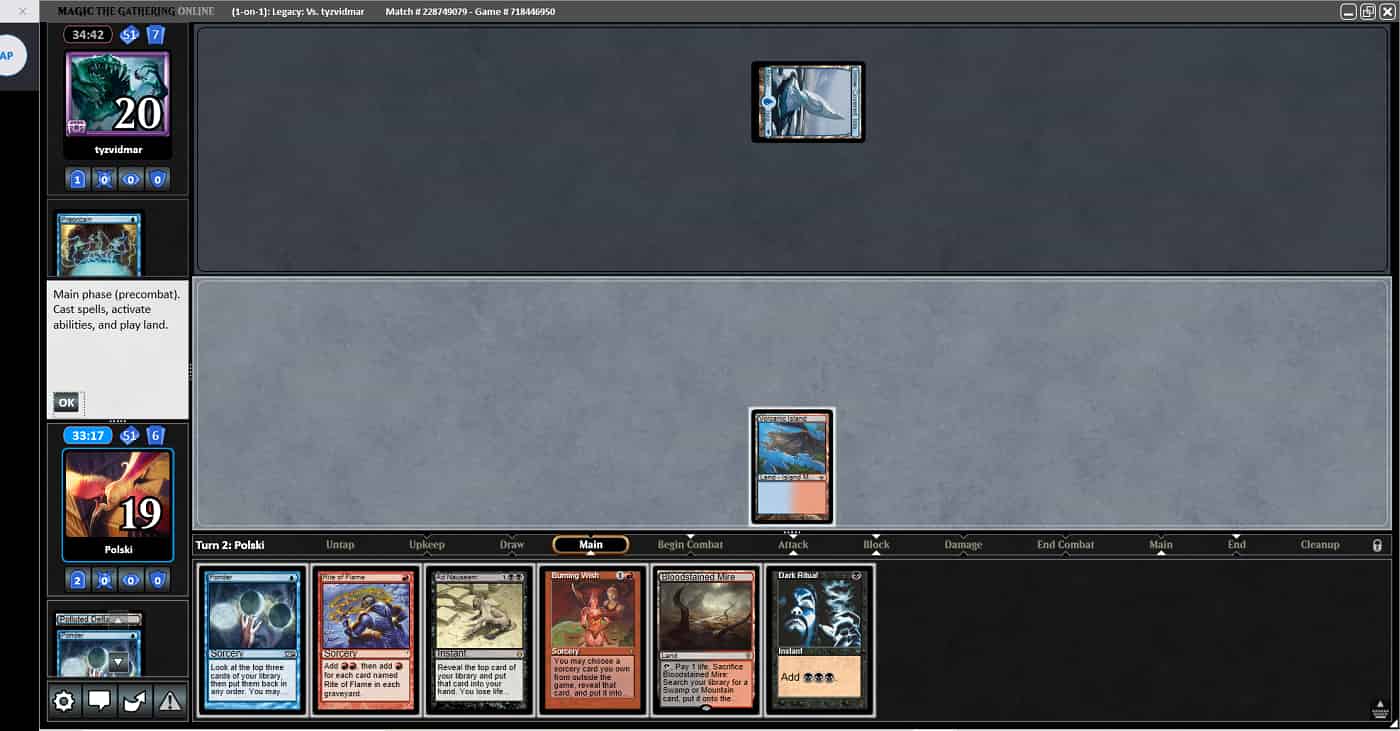 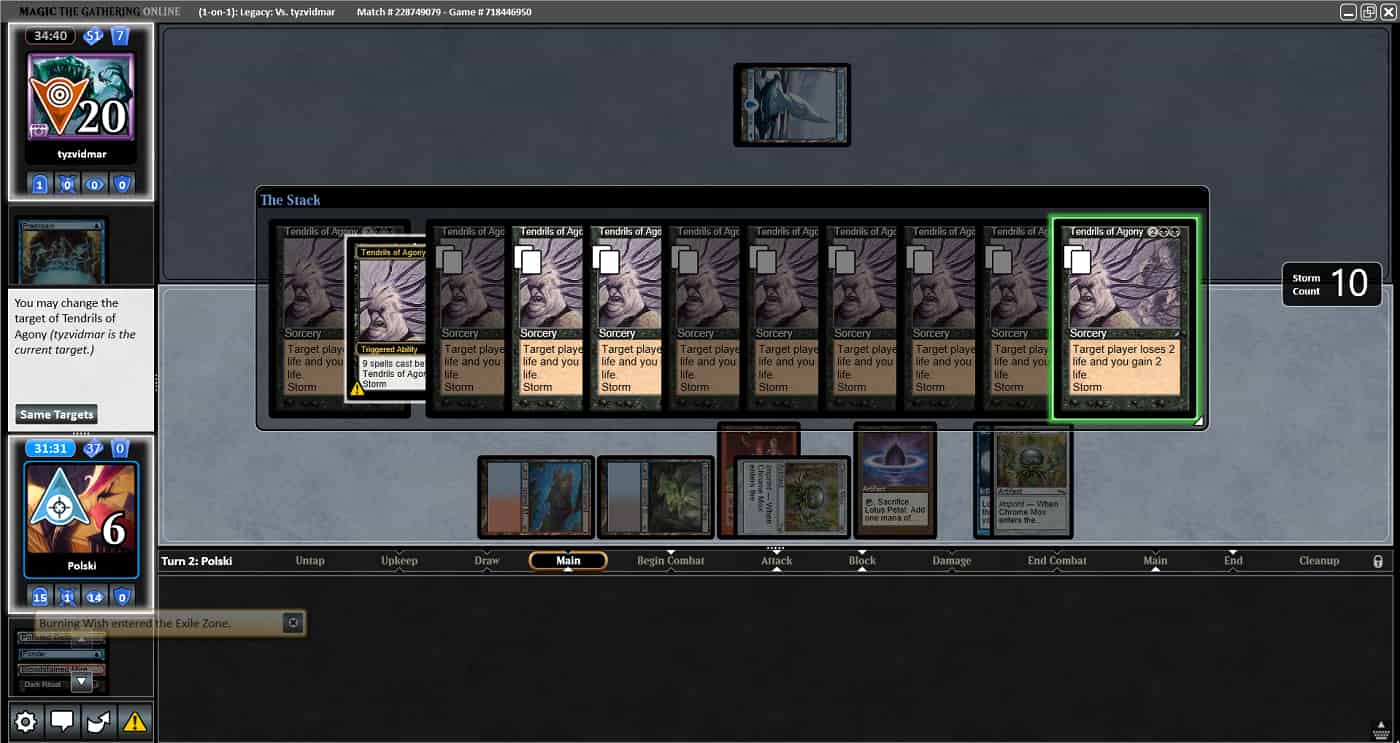 Even though I won 2-0, I don’t think the second game was necessarily the best play, but it worked out. Would you have played it differently? Let me know! [[Doomsday]] is a deck I enjoy playing against because both decks have unique ways of winning and have access to many different tools to try to win and disrupt the opponent. Trying to win through their discard, counterspells, and relatively fast combo can be tricky waters to navigate, but I do think TES is favored because of its speed. I hope with [[Thassa’s Oracle]] that [[Doomsday]] continues to see play. I hope you enjoyed this example match, and I wish you the best of luck in your own testing!