Eldrazi and ramp decks have existed ever since the printings of Cloudpost and Glimmerpost and the Eldrazi in legacy, and even in modern while they were legal. The goal is to assemble these posts along with artifact mana to accelerate out bigger expensive cards like Ugin, The Spirit Dragon and Karn, Scion of Urza. In order to survive the game long enough, Eldrazi Ramp uses cards like Chalice of the Void and Trinisphere as a way to lock the opponent down. These cards also help protect the more expensive payoff cards by trying to shutoff discard spells or counters. The deck has always been around in small percentages, but with the recent printing of Ugin, The Ineffable and Karn, The Great Creator the deck has been putting up some good results lately with a recent MTGO Challenge win, another in 4th place and an Eldrazi Ramp deck in 2nd on 05/05/2019. Is this a fad or is Eldrazi Ramp here to stay? Either way, if we want to have any success against this deck then we are going to need a plan.

How does Eldrazi Ramp matchup against TES?

Trinisphere, Chalice of the Void – Being an artifact based deck they need some way to interact with the opponent and combo decks. It does this through what is considered lock pieces. They are called lock pieces because that’s exactly what they try to do to the opponent, lock them from casting spells. To nobody’s surprise, this is very strong against a storm deck. Chalice of the Void is the least threatening of the two because the opponent can only select one part of our deck, based on the number of counters on Chalice of the Void. Typically, they’re going to choose one or zero. Both shut off a big portion of our deck, but not big enough where we can’t win. Whichever number they select we may be able to go off with enough cards that won’t be countered. Trinisphere, however, is a different story. This makes it nearly impossible to combo. We are going to need to use a bounce spell or a discard spell to answer this one.

Karn, The Great Creator – The main text we need to pay attention to here is the very first line. See Null Rod. We have 12 artifacts in our deck and they are quite crucial to being able to combo off or getting mana post Ad Nauseam. At the very least this will slow us down several turns giving the opponent the opportunity to tutor with Karn, The Great Creator to find another lock piece type of card. It just piles on. We can win through this, but it will require the right type of hand, that isn’t reliable on artifacts, to try to win. If not, then we will need a bounce spell or discard spell to prevent it from being in play during our turn.

The key turns of this matchup are the very first turns, 1-2. This is the phase of the game where the opponent is either playing hate permanents, we are using discard spells on said cards, or we are winning the game. What happens during these turns will often determine the outcome a vast majority of the time. This isn’t a game about grinding and trying to outmaneuver the opponent. It’s just a straight up race vs their lock pieces and they’re trying to play their cards under our combo. During the post board games there can be a little more play to it when we add bounce spells. The key to winning this matchup is all about speed. Another crucial decision we make is balancing speed using Empty the Warrens vs potentially waiting a turn to go for something like Ad Nauseam. This is a tough balancing act because the punishment could be locking us out of the game if we wait another turn. Like previously mentioned under what cards the opponent could play against us they certainly have a few answers to Empty the Warrens, so it’s not always a guaranteed win. Making these type of decisions often come from practice and just putting in the reps to know when you should go for each combo and how many goblins you need. For example, making 8 goblins is a lot different than 10+. The difference between a 2 and 3 turn clock is huge. The number of goblins you can make may sway in which direction you go.

This is one of our easier matchups to sideboard in. We have a nice swap here by adding in all of our bounce spells. The opponent is only trying to stop us by using permanents and we need to get them off the board in order to combo. When we want to be winning quickly or having a first turn discard spell, Ponder doesn’t go with that goal. It’s a card for maximizing your draws and playing the long game, which isn’t what we’re trying to do.

I lose the die roll and am on the draw. I have a relatively decent hand, but just missing a tutor or a pay off card. My opponent leads off with a tapped land, and on my first turn, I just play a land and Ponder hoping to set up a second turn combo. Unfortunately, on my opponent’s second turn they play a Chalice of the Void for one. On my turn, I draw the Empty the Warrens, that I knew was there from my previous turn. I now have the option to cast Empty the Warrens for 10 goblins, and I do just that. 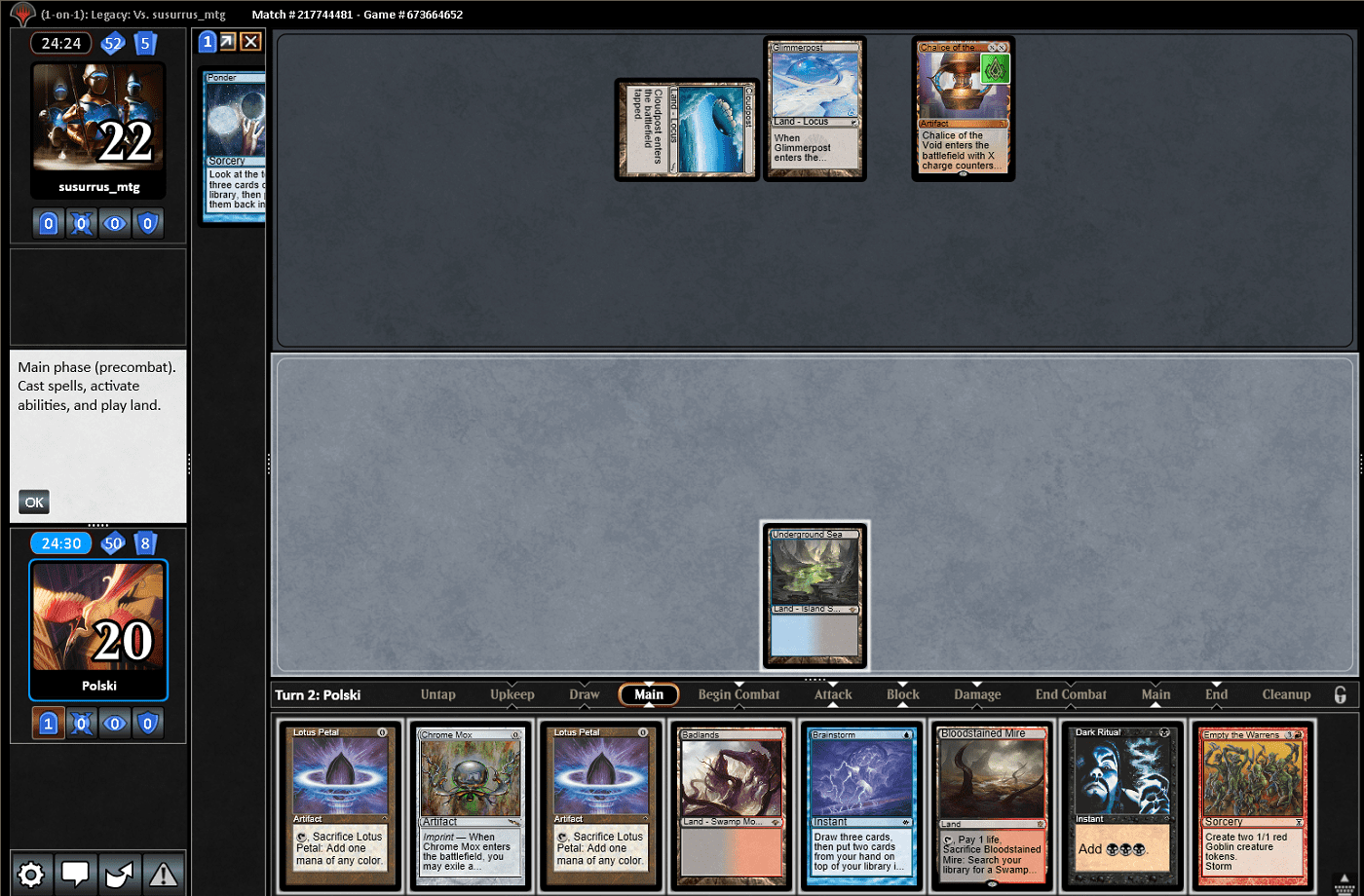 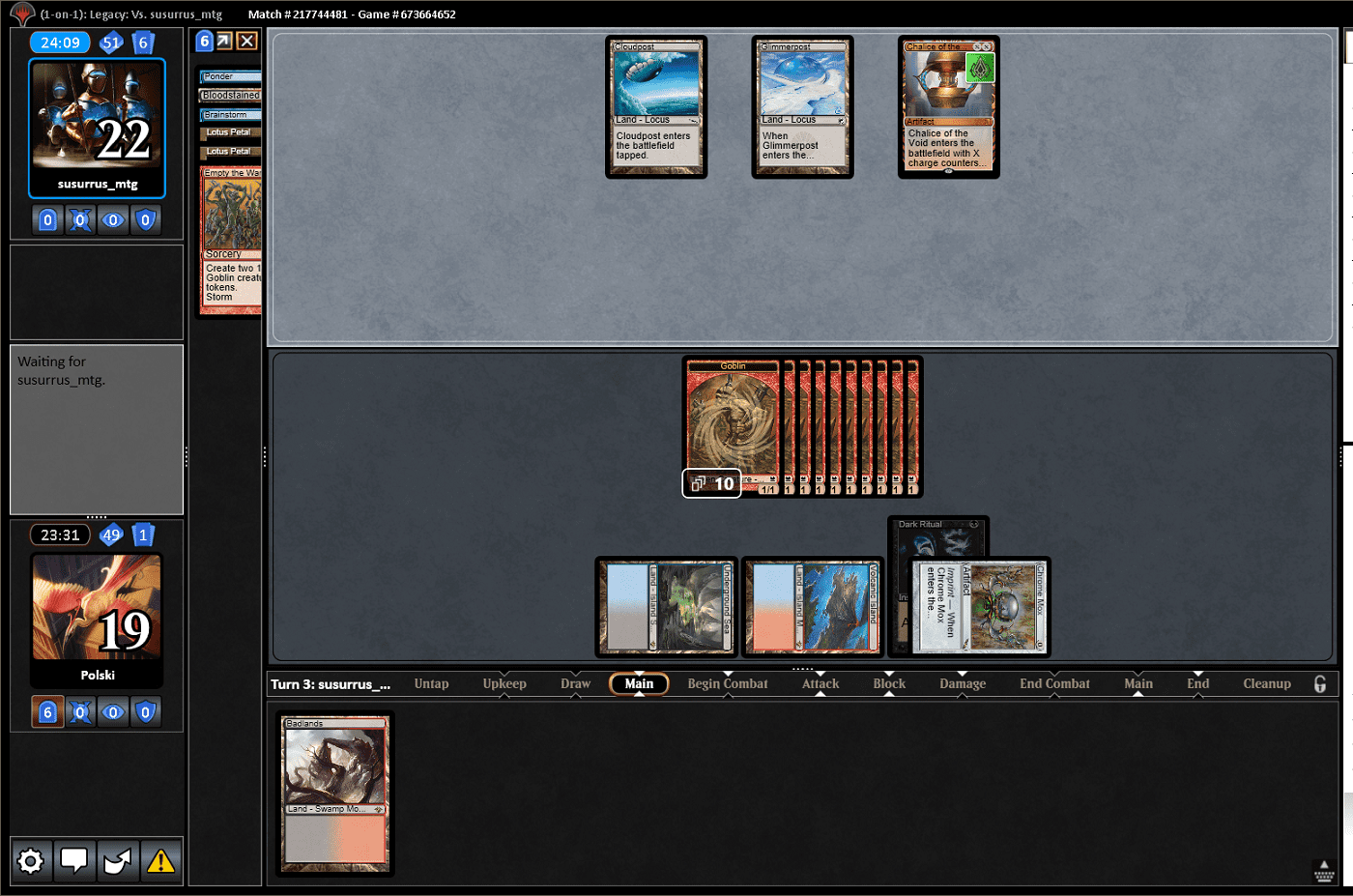 My opponent then responded on their turn by playing a Walking Ballista and Thran Dynamo to block and shoot down a couple of tokens after I attack on my third turn. 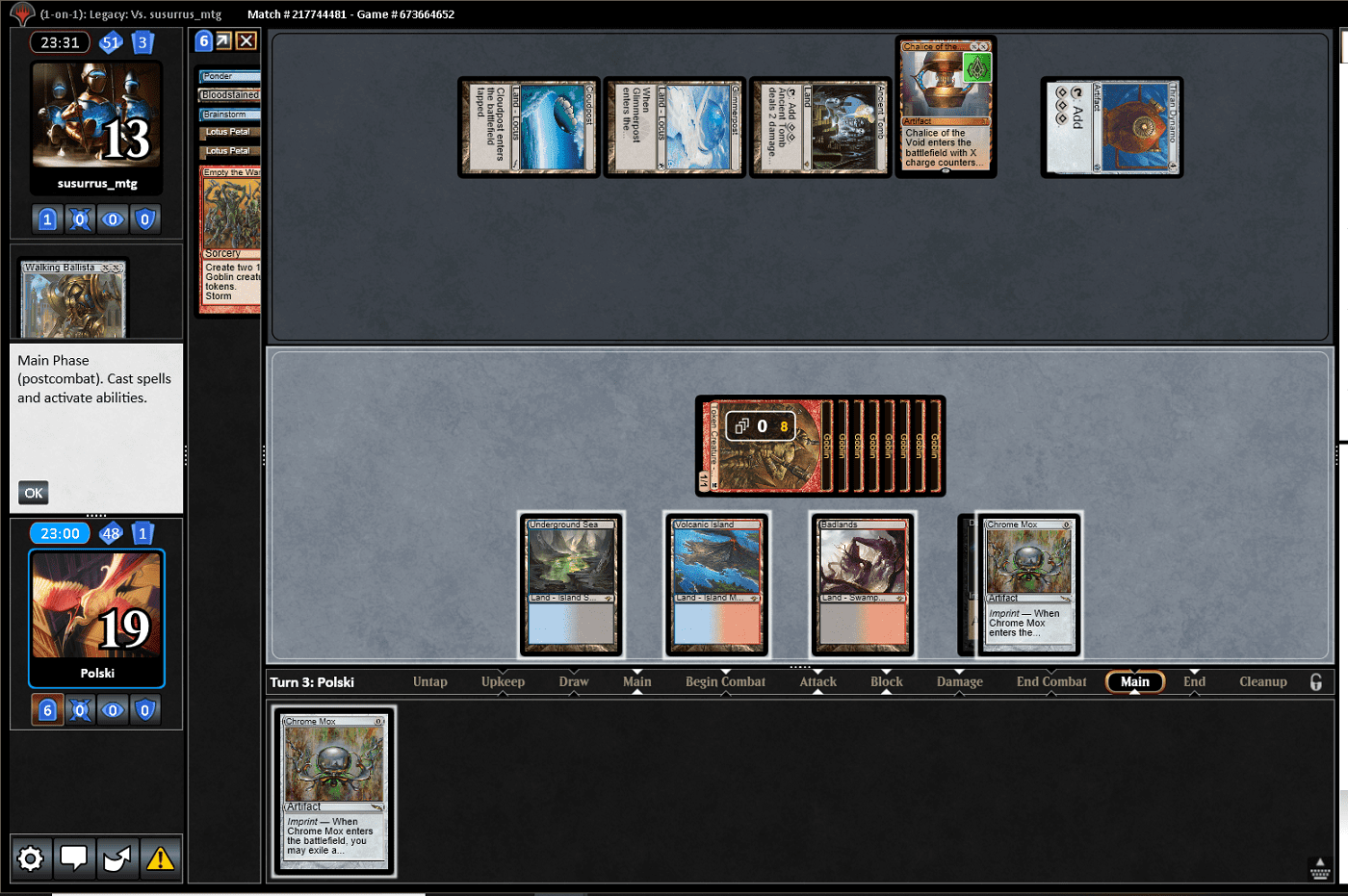 On their following turn, the opponent casts Karn, The Great Creator to tutor for a Ratchet Bomb to play. Having no resources left and my opponent with an active planeswalker I concede the game and head to the sideboard. 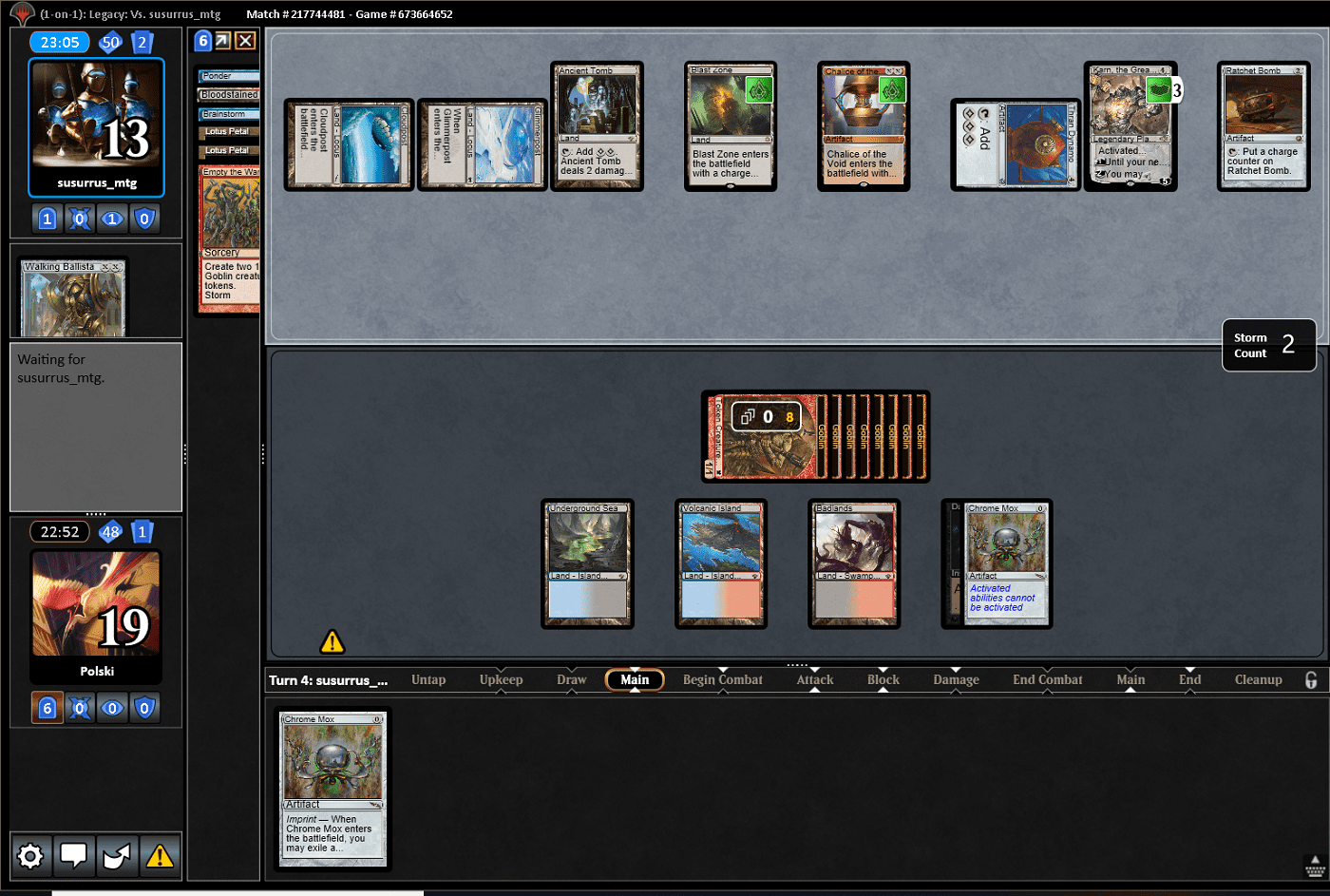 I sideboard like mentioned above and head into the second game on the play. I mulligan to 6 and they go to 5, so both players starting low on cards. I lead off by playing out a Lotus Petal in fear of a Chalice of the Void on zero. I also want to discourage my opponent from playing a Chalice of the Void on zero because I am holding two copies of Chrome Mox. They start their turn doing exactly what I was afraid of. On my second turn, I cast a Brainstorm looking for some help to hopefully combo off quickly. 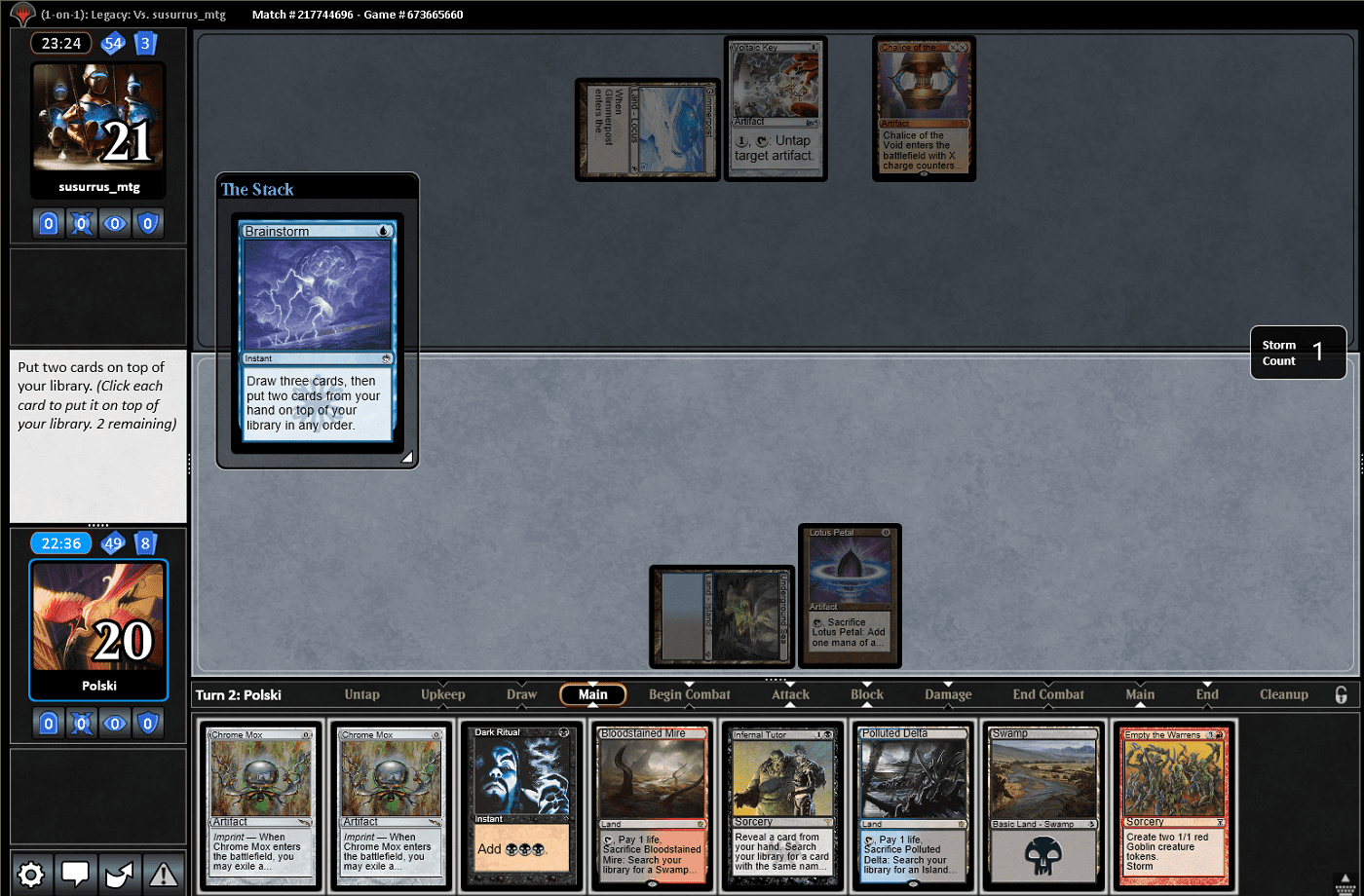 I decide to burn my Lotus Petal and use my land drop for the turn to cast Infernal Tutor to fetch another copy of Dark Ritual. My goal here is to be able to storm off next turn with Empty the Warrens. I just need to avoid a second lock piece. 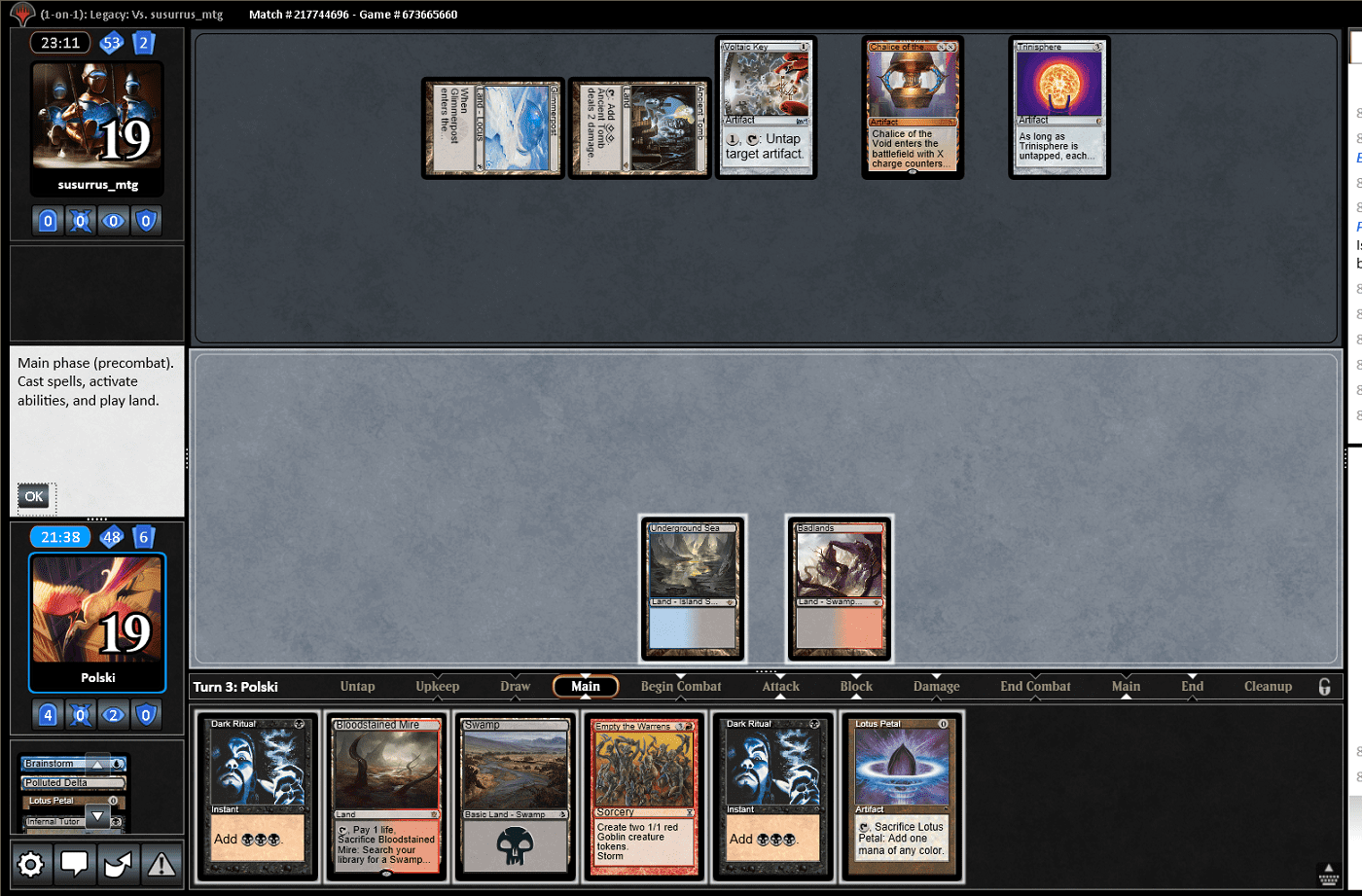 Trinisphere. That’s the exact opposite of what I wanted to see. Now I have to wait until I find a bounce spell here. Either Chain of Vapor or Echoing Truth will do. On my next turn, I just cast Empty the Warrens here for two goblins hoping to steal the game. I don’t think it will work, but the longer the game goes the worse the card gets and my plan isn’t to find a bounce spell and then make goblins on turn 5 or 6. It just won’t be successful, so I cast it now. A few turns after that not much happens from my side. I continue to take draw steps looking for a bounce spell and building up my hand. My opponent, however, has cast three copies of Karn, Scion of Urza to generate their own army of tokens. 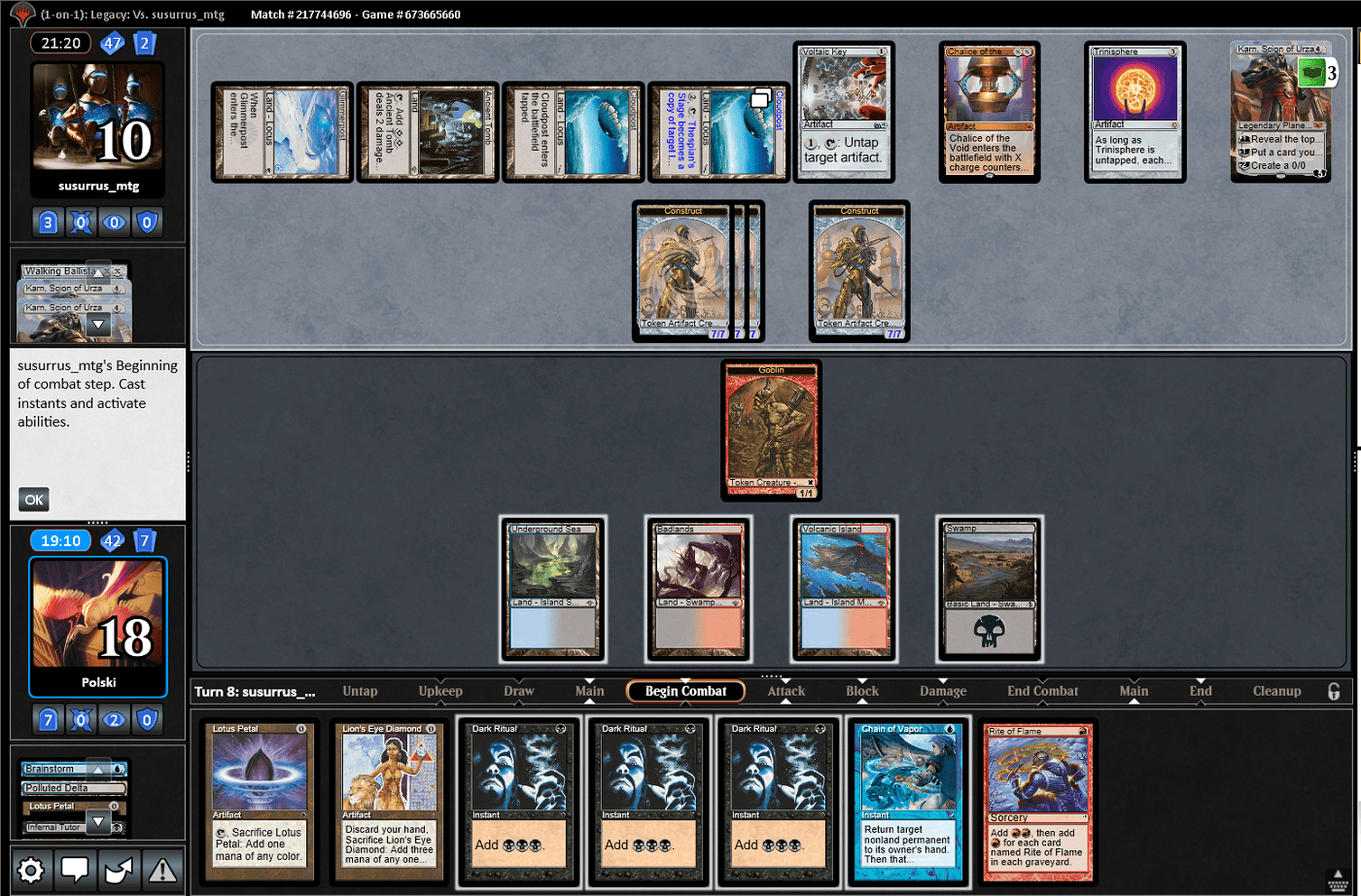 I eventually find a Chain of Vapor for their Trinisphere, but it’s just too late when my opponent has lethal in play and I still don’t have a tutor or way to combo off here.

Unfortunately, the games didn’t play out my way, but I ended up learning a lot! One of the main things I learned when testing this matchup was the strength of Karn, The Great Creator. That card is the real deal and if they continue to play four copies the matchup gets significantly worse for us. The ability to nullify our artifacts is huge, but also being able to tutor up an answer for Empty the Warrens or a second lock piece makes it an all-star in this matchup. Another lesson I learned is the importance of testing out new cards that are printed and how they influence other decks. Storm may not have received any new cards in the last set, but our opponents sure did! And testing out matchups after they get new cards is crucial to adapting and keeping up with current metagames. You never want to go into a tournament with the mindset of a past metagame or an old matchup analysis. Without having done thorough testing of this matchup I would be overestimating how good Empty the Warrens is. Hopefully, you enjoyed this article, and until next time, I wish you the best of luck in your own testing!