Eldrazi is a fairly new deck thanks to the recent Eldrazi additions from Oath of the Gatewatch. The “Stompy” archetype itself has been around for a very long time and its plan is to use fast mana to accelerate out lock pieces, and then follow them up with a fast clock to pressure the opponent. The idea behind this is that by accelerating out lock pieces before the opponent can cast many spells and then using a fast clock, like an Eldrazi, to try and kill the opponent before they get out of the soft lock. These lock pieces, along with mana disruption in the form of Wasteland, often don’t win the game on their own, but rather just slow the opponent down enough so their aggressive plan can take over. Part of the reason this version of stompy is performing better than earlier versions is because of the new Eldrazis. Cards like Thought-Knot Seer that provide both disruption and a clock, where previous variations did not have cards like this, push this archetype to being a very good deck in legacy instead of being just fringe.

How does Eldrazi matchup against TES?

Ancient Tomb, City of Traitors, Simian Spirit Guide -These are the cards that let them execute their game plan. Both halves of their deck, aggression and disruption, are reliant on these cards to allow them to come out of the gates swinging. All of the cards in their deck would not be as good in legacy if they had to play single mana producing lands, so this part is an integral part of the strategy, and allows them to play under the opponents with their lock pieces.

Thought-Knot Seer, Chalice of the Void, Thorn of Amethyst – Despite Eldrazi being an aggro deck they definitely play a lot of disruption, and for storm these cards do overtime. It can be very hard to win through some of these cards. We either need a rare hand or an answer once they are on the table. Thought-Knot Seer isn’t as bad, but it could set us behind a turn or two, which could be just enough since he also comes with 4 power.

Reality Smasher, Eldrazi Mimic – Here comes the aggression. Eldrazi plays lots of creatures that can be aggressive, but here are just a few. Even without the disruptive elements of their deck they can still kill us by turns 3 or 4 with a very quick draw. We won’t have time to mess around with a ton of cantrips and spending time to setup. Ad Nauseam also becomes unreliable early in the game because of how much pressure and damage they can do.

Ratchet Bomb, Warping Wail – These cards are interesting interaction that we have to keep in mind. We typically think Eldrazi decks only play to the board and that we have a green light just because there’s nothing in play stopping us. I have lived the nightmare of being blown out by these cards enough to never forget. Ratchet Bomb is tricky because if they put it into play then we have to answer it or not go for goblins. If they keep it hand then they can potentially keep it a secret to try a blowout play, but that also exposes it to discard. Warping Wail is a card I often don’t play around, because I either forget it exists or find I am under enough pressure I don’t have a choice. Typically they save this card to try and snag one of our tutors as a blowout. Most lists only play 2 copies, so I only play around this if I see it in their hand.

There are a couple different phases of this game and I tend to shift my mindset depending which phase we are in. The first step is search for our basic lands. This is especially crucial for playing around Wasteland. There’s the first turn of the game where if we are on the play then we have to check if we can combo off or if we have a discard spell. If you’re not winning quickly you’re going to want to have discard spells for Chalice of the Void, Thorn of Amethyst, and maybe even Warping Wail. Our worst turn 1 play is something like Ponder or play a land and pass the turn. The reason being is because they can untap and play a Chalice of the Void or an aggressive creature and are one turn closer to a Thought-Knot Seer or some other form pressure. After the first turn if we don’t combo then we absolutely need it by turn three because by then our opponent is going to have enough pressure either kill us, make Ad Nauseam no longer castable, or be too late for an Empty the Warrens. Each draw step the opponent takes is also one draw closer to a lock piece. Our game plan has to be all based on speed or having discard or another answer to their lock pieces. Trying to setup the perfect Brainstorm and a Ponder plus a fetch land is often just too slow and we don’t have time for that.

This sideboarding strategy reinforces our overall game plan and how we want to tackle the matchup. Ponder is just too slow and we can’t afford a hand of several cantrips. We take out two copies of Cabal Therapy because we are bringing in a lot of better ways to interact and we don’t want to be cluttered with interaction and not enough combo pieces. We need a good balance of everything. The opponent is mainly playing to the board and not as much from the hand so we bring in all of our cards that play to the board and less so from the hand, like Cabal Therapy. This isn’t a very detailed explanation because this is all very intuitive here.

I lose the die roll, so I am on the draw, and we both draw our opening hands and the match begins. We pickup where it is my turn 2 and this is the board state: 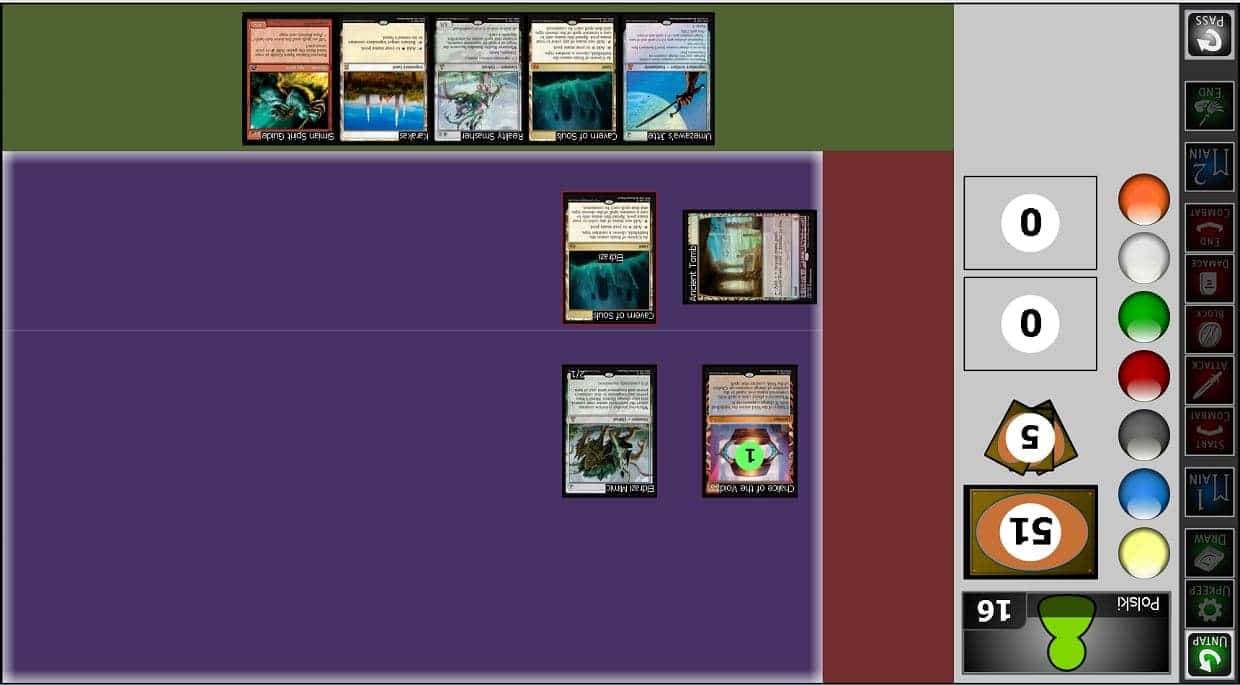 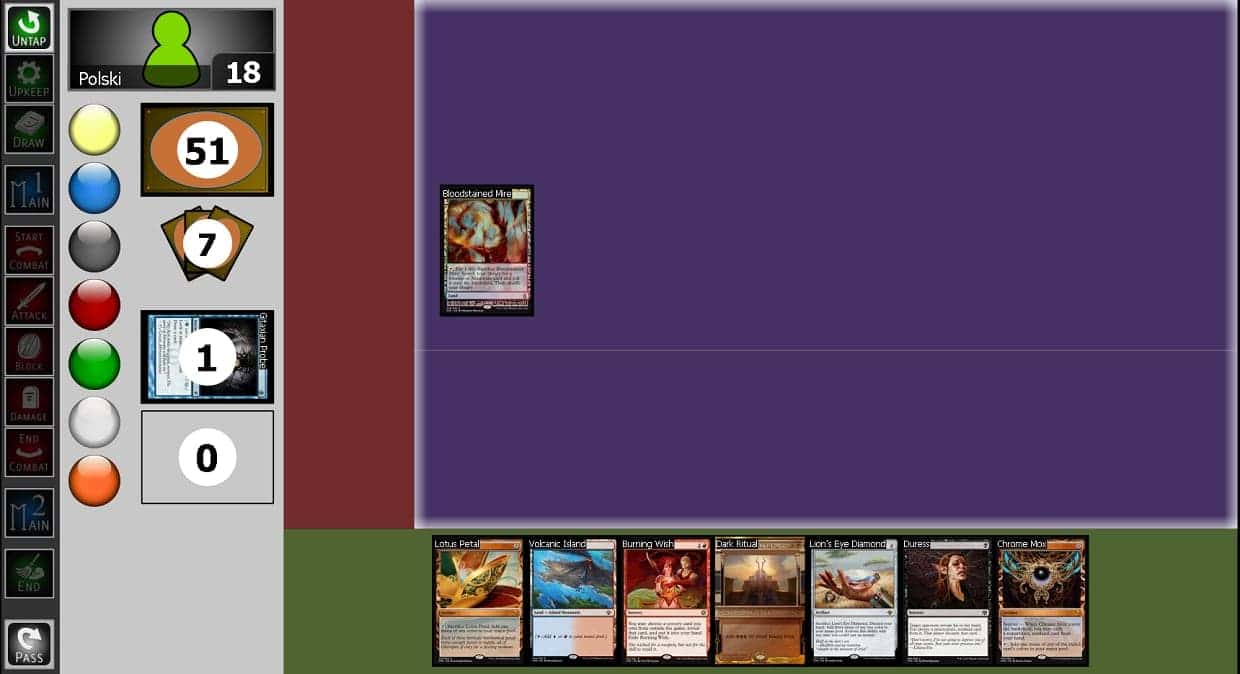 We are in a position where the opponent has a chalice on 1 with an Eldrazi Mimic in play threatening a lot of damage on their next turn with the combination of a Reality Smasher. This will make Ad Nauseam pretty uncastable down the line. They also have an Umezawa’s Jitte in hand that lines up well vs a few Empty the Warrens tokens.

We can make 12 Goblins this turn by playing Chrome Mox imprinting either Duress or Dark Ritual and then casting the other one, letting it get countered by Chalice of the Void and then using our lands with Lotus Petal and Lion’s Eye Diamond to Burning Wish for an Empty the Warrens for 12 goblins. Do we think this is enough to either beat their aggression or beat their Umezawa’s Jitte? I think so, and waiting additional turns seems worse for us because we aren’t going to be making a lot more goblins than this and we wont be able to use Ad Nauseam. Also the longer we wait the better Umezawa’s Jitte is against us.

I went ahead and made this play. Going for this line also meant he would have to lose his Eldrazi Mimic since Umezawa’s Jitte won’t have any counters when he goes to block. On my opponents turn 4 he could have used his second Cavern of Souls to name “Ape Spirit” to cast + equip his Simian Spirit Guide, but he missed that line (not sure it mattered though) and I ended up winning.

Into the second game and we are on the draw, so here’s the situation on turn 1: 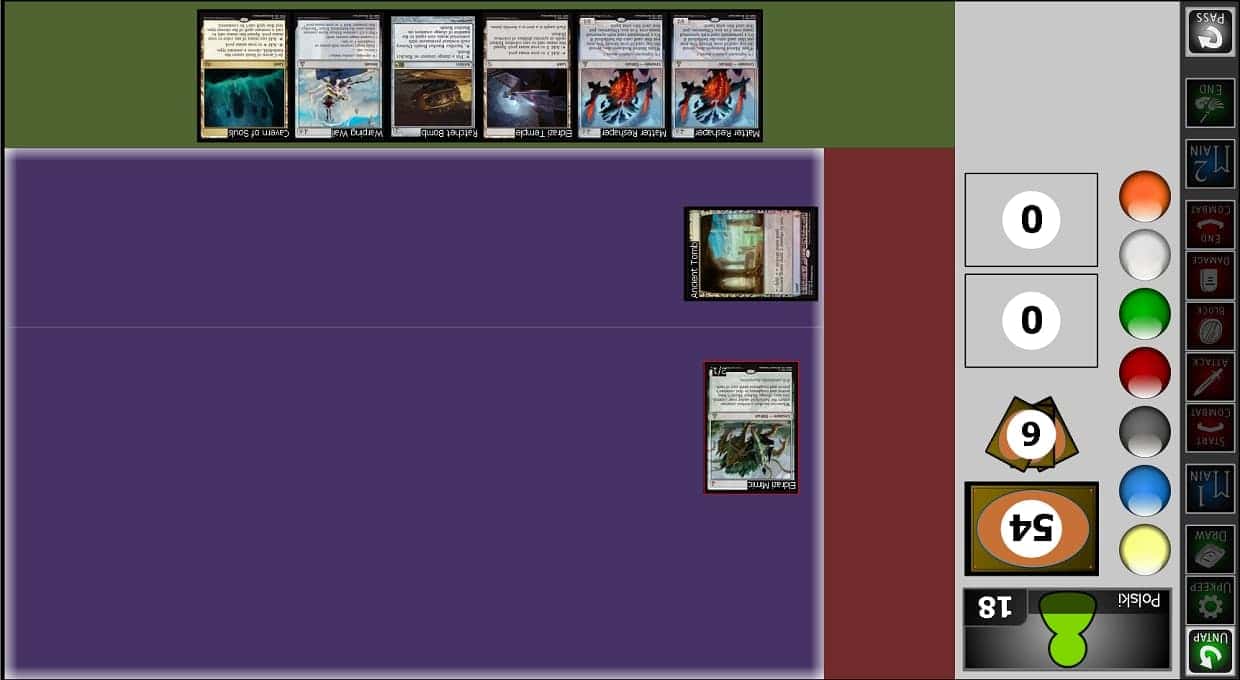 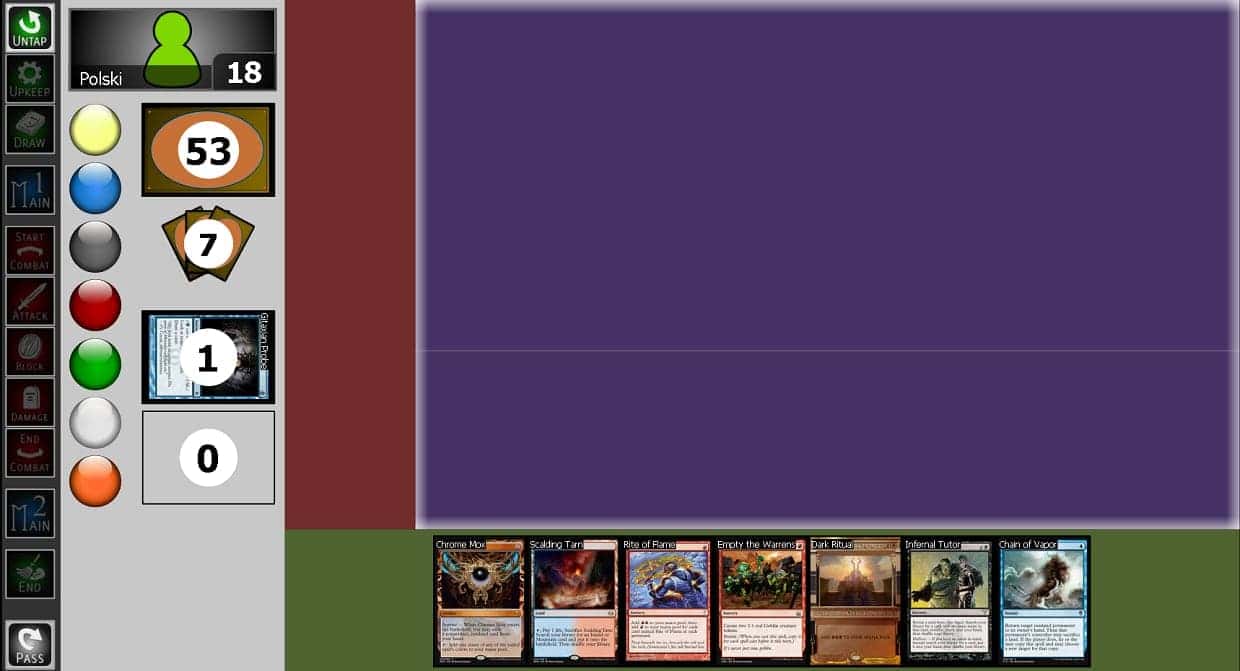 This situation is a lot more open since the game is just beginning, but one good characteristic of a good pilot of storm, and Magic in general, is to be able to plan out several turns. A lot of storm examples we see and discuss are what to do on a key turn or this turn in specific, but we need to be able to think out a plan over the course of several turns and I think this is one of those scenarios that’s good to do. Obviously plans change with each new card we see, but having an overall goal and plan on what we are aiming to do in future turns is critical to our success in this game. So in this situation I want you to think what our overall goal would be or what’s our best draw steps etc? These are questions we all need to be asking ourselves every turn of the game, so I don’t want to give you an answer to what I did, but rather leave this open ended to think about and talk about.

The TES community is one I love for many reasons, but my favorite reason is that we can talk through plays and lines and it’s interesting to hear how other people play the deck and approach situations. Not just of how to win on this current turn, but I think more talks need to happen about how we plan out our turns leading up to our combo turn. Storm is a very difficult deck to pilot, and everyone knows that, but most a lot of thinking goes into our turns leading up to our combo turn and not just as we are executing our combo. I hope this scenario is a great opportunity to take a moment to think to ourselves about how we plan on winning, what cards do we hope are on the top of our deck and not on the opponents, what do we need to do to win this game? These are questions that should be constantly on our mind.

I hope we can have a discussion on the last scenario and as always I learn from the community just as much as the readers, but until the next one let’s keep the conversation going.