Goblins is one of the most historic legacy decks because it has existed since the inception of legacy. Goblins has significantly decreased in popularity over the past several years due to the printing of Deathrite Shaman, and a few other cards, but since its banning people have been trying it out again, and we need to be prepared. Goblins is a unique deck in that it is a mono-red deck that can kill quickly, but it also has a strong late game. The first strategy is made possible with cards like Goblin Lackey, Warren Instigator, and Goblin Piledriver, while the latter strategy makes use of the huge card-advantage which the deck can create with cards like Goblin Matron, Goblin Ringleader, and Mogg War Marshal. The way it interacts is through its mana base with cards like Wasteland and Rishadan Port. Goblins shine in a metagame full of control decks and midrange decks. Its weakness is vs combo decks, which is exactly what TES is. Despite Goblins being weak to combo, this matchup is certainly not a bye.

How does Goblins matchup against TES?

Goblin Lackey, Goblin Piledriver – These are the cards that give Goblins the aggressive draws it needs to really pressure our life total and to give us the least amount of turns possible to combo off. They can also shut off Ad Nauseam by how much damage they can do. Goblin Lackey really pushes this by being able to put in cost reducer goblins or like a Goblin Matron to tutor up a Goblin Piledriver. A turn 1 Goblin Lackey is one of the scariest plays Goblins can make vs most of the format.

Wasteland, Rishadan Port – We all should be familiar with playing against Wasteland, but Rishadan Port isn’t as common. The only other deck that plays both of these cards is Death & Taxes. Beating these type of cards is going to be more about your skill in legacy and not so much about the matchup in particular. Some hints to beating these cards is fetching the basic lands if you can afford to. That is why they are there. Not all hands allow you to do this, so making this evaluation of when you can afford to will be key in beating these types of cards. Fetching out a basic when you require several color combinations could trap you in not being able to combo off at all. We can also afford to leave fetch lands around until the time we are going off to nullify Rishadan Port.

Chalice of the Void, Thalia, Guardian of Thraben – Goblins has a rough combo matchup. You certainly don’t sleeve up Goblins with the intent of dominating combo decks every round. Because of this, they have to add some cards to help out this matchup. These are just a couple cards that have been common in recent lists. We primarily have to worry about these in post-board matchups, but you never know. Always have to be prepared for any number of hate cards aimed at us.

The key turns for this matchup are going to be 2-3. This is ideal when we are going to need to be combo-ing off. This is also the key turns for the opponent where they are going to be assembling their game plan. Either through putting on a quick clock, playing a hate card, getting their AEther Vial counters, or disrupting our mana. Realistically the best way to combat all of their strategies is just to be faster to play under it. Having a hand that has a quick combo potential is what we will be looking for. The more turns that pass the less likely we are to win the game. If we have to play longer, because of the context of our hand, then we need to try to sculpt a hand based on the best win condition. Usually Empty the Warrens isn’t good enough because of their ability to put a bunch of creatures into play quickly. Ad Nauseam can also be terrible with how much pressure they apply. They can get our life total down low in the early turns. It can be tricky figuring out just which win condition to use when we are in some of the later turns of the game. When trying to develop our mana base always keep in mind Wasteland and Rishadan Port. Straight up losing a game because of these cards always feels miserable, and if we have the opportunity to avoid it then we should.

Goblin decks focus on playing to the board and not much on the stack or in their hand that we have to worry about. We can easily cut our discard spells here because they don’t solve the problem once a permanent is in play, and they rely on creatures, so Duress isn’t good. This means we easily want all 4 Echoing Truth. This will answer any random hate permanents out of their sideboard, but also slow them down significantly by bouncing a Goblin Lackey or AEther Vial. Because both of our main win conditions, Ad Nauseam and Empty the Warrens can be turned off early in the game it is a good idea to bring in the Past in Flames and Tendrils of Agony to have other options of winning. This also allows us to draw them naturally instead of having to slow down and tutor for them with Burning Wish. Empty the Warrens is rarely good enough to beat them unless it’s on exactly turn 1. It’s an easy cut. Chrome Mox is in our sideboard for every matchup where speed matters, and that is certainly true here.

Onto an example game!

I am a couple turns into the first game and I realize my opponent is immediately on Goblins by his first couple of plays. My hand is a little slower, but I have a Brainstorm to hopefully fix that and be able to go off. I cast it and finds more lands for me, but not much help after that. 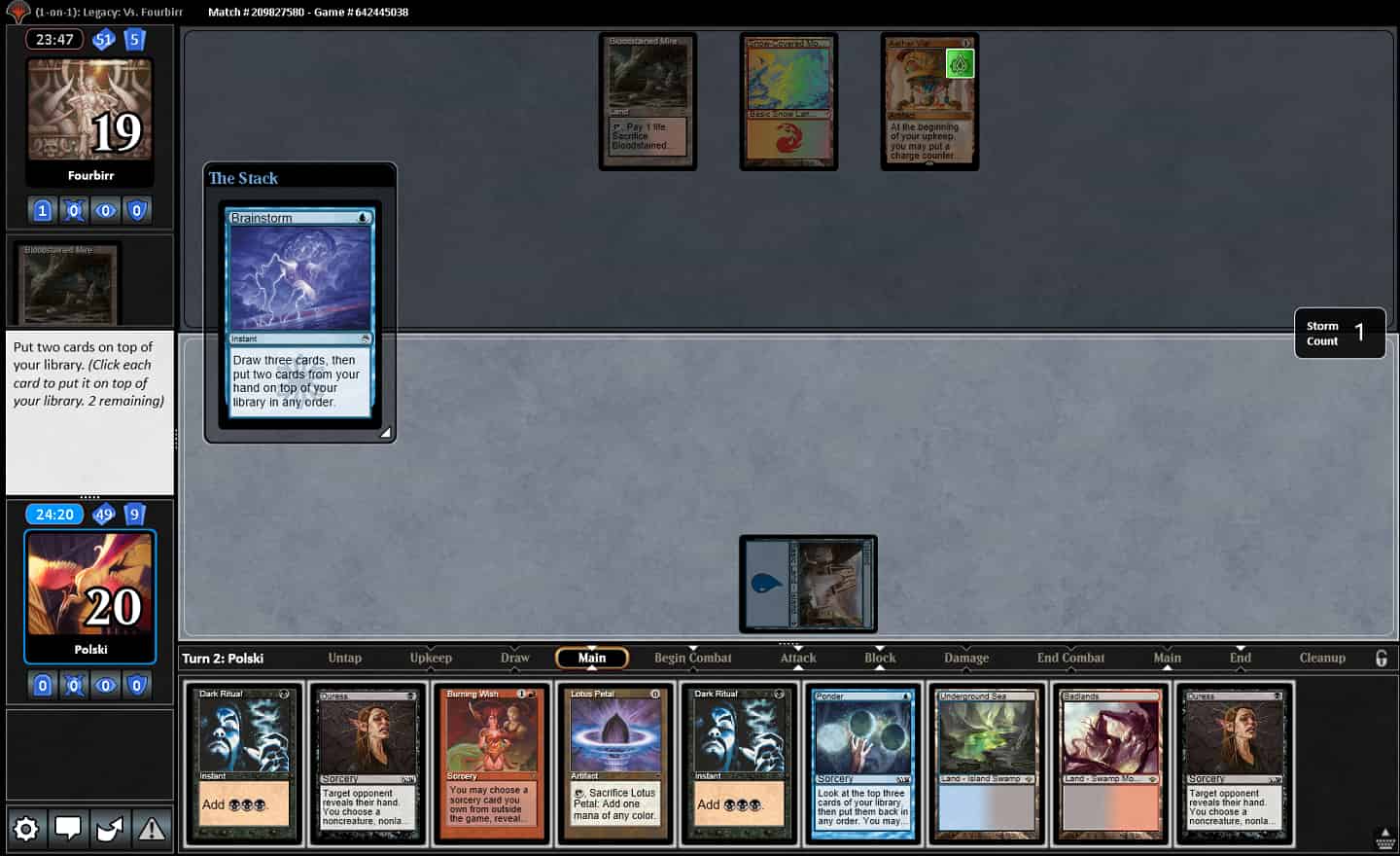 I put back the 2 copies of Duress because they’re pretty bad and play the Underground Sea to Ponder and shuffle. I draw a Duress after the shuffle.

On the next cycle of turns, my opponent uses their AEther Vial to put a goblin into play and then Rishadan Port me on my upkeep. I make my third land drop and cast Burning Wish for Dark Petition hoping to combo off with Ad Nauseam on the following turn. 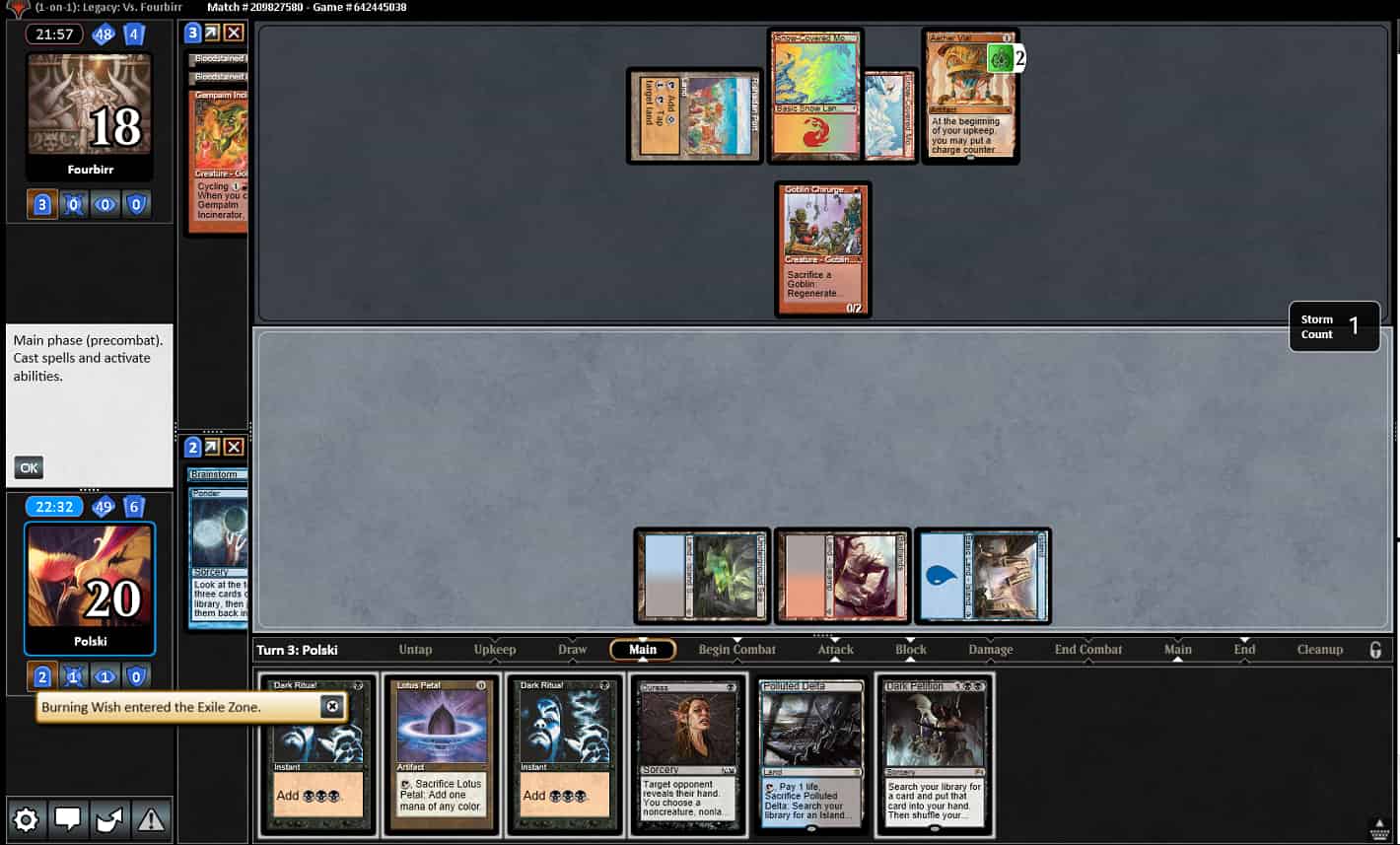 Unfortunately, my opponent decides it’s their turn to storm off. On my end step, he uses his AEther Vial to put into play a Goblin Piledriver. Then they untap and take their turn. They start off with a Goblin Warchief into Goblin Matron for Goblin Cratermaker, which was immediately cast. They all attack me, and I am about dead. 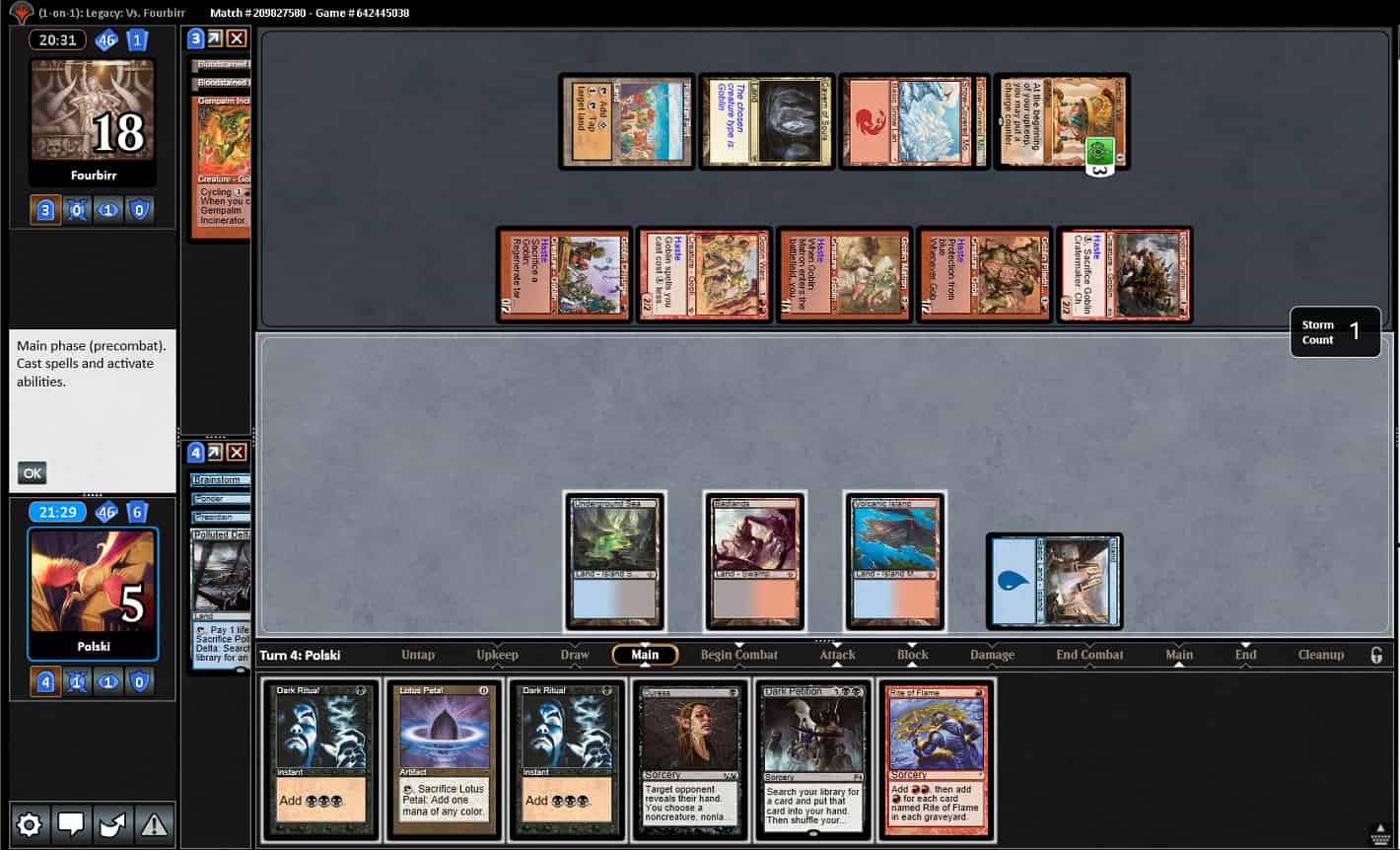 Well, this got rough pretty quickly. I don’t have many options here, so I start my turn off with the Ponder I drew for my turn and end up shuffling and draw a Rite of Flame.

Wait a minute…I miscounted. I didn’t consider the Ponder from the beginning of the turn towards my storm count. 3 lands, Rite of Flame, Lotus Petal, and 2 copies of Dark Ritual is 9 mana. That is enough mana and exactly enough storm to cast Duress and Dark Petition for Burning Wish for Tendrils of Agony. This uses up all of my mana with exactly 9 storm. Luckily, I saw the storm counter of 1 on my screen to remind myself to count the Ponder or I may have not have realized.

I think this match showed demonstrated just how bad Ad Nauseam and Empty the Warrens can be. You blink and the game looks like it’s going great to miserable within 1 turn. Goblins can be very explosive and my example game showed that. You can never be comfortable vs them. This is why we sideboard the way we do to have more natural storm kills or use Past in Flames more reliably by naturally drawing it and not banking on Ad Nauseam or Empty the Warrens as hard.

Another good general storm lesson is that sometimes we get too caught up in counting our rituals and our tutor affects when calculating our storm, but it’s important to remember any cantrips of discard spells that we cast earlier in the turn. Especially on magic online I tend to think a little longer if I’m multitasking or taking my time. Even in paper we cast a discard spell and consider our opponent’s hand, then write their cards down on paper, think about how to navigate through their permission. This can take a couple of minutes and it’s quite easy to forget to count it towards storm. It’s a good idea to check your graveyard when combo-ing off to make sure you counted every card cast this turn by both players. It feels horrible to have to change lines mid storming because you realize the storm count is different than you thought. Hopefully, you can take something away from this article for your next Goblins match, but also the importance of not being tunnel visioned, because it can cause you to forget the storm count.