Grixis Control was the most played Legacy deck at Pro Tour 25th Anniversary a couple months ago. One of the reasons it’s so popular is due to it having a slightly higher than 50% matchup against most decks in the field. It plays out like a classic Jund-style deck. These type of decks tend to be played a lot because people love gaining their value and trying to out attrition their opponents. If you want to be doing that then this is the Legacy deck for you. It does that by playing so many 2 for 1 type cards like Planeswalkers, Kolaghan’s Command, Hymn to Tourach, Snapcaster Mage, and even Baleful Strix. With these style of decks being popular over the years it’s important we know our game plan. I don’t see these types of decks going anywhere in the near future.

How does Grixis Control matchup against TES?

Force of Will, Flusterstorm – Typically the only main deck counterspell is Force of Will, with Flusterstorm being in the sideboard. If you have any experience with Legacy then playing against Force of Will shouldn’t be a surprise. It’s obviously great vs us and it’s something we really only want to play into when we have no other options or when the odds they don’t have one is great. We just need to prioritize when we use our discard spells to make sure to coast is clear and not use them several turns before our combo turn if we don’t have a second. Flusterstorm is even worse for us because it stops naturally draw storm cards, where Force of Will does not work as well.

Hymn to Tourach, Thoughtseize – Discard spells are great vs all combo decks, but that is especially true for Storm. It is easier for us to set up and wait for our combo turn to use a discard spell and clear the way of any counterspells, but proactive discard spells are difficult for us to interact with. We have very few ways to do so other than using our cantrips wisely and making sure we protect the most important cards by keeping them on the top of our library. Their ability to strip our resources is the best way to prolong the game and give them the time needed to put on pressure and find more disruption.

Marsh Casualties, Toxic Deluge – Grixis Control isn’t just cold to a large Empty the Warrens. In the sideboard, we can almost be certain that there are a couple sweepers. Not every deck brings sweepers in against TES, but Grixis Control definitely will because of how many dead cards they have in their deck. Empty the Warrens early in the game is also very good vs them and they know it, so they will be respecting this angle. I still leave Empty the Warrens in, despite them bringing in sweepers, because of how good it is typically and they play so few answers. I wouldn’t necessarily bring in more copies, but the 1 is fine.

Surgical Extraction – This isn’t that great vs TES. but people still bring it in against us, so we might as well respect and anticipate it. Another reason why Grixis Control may bring it in is because of how many dead cards they have otherwise. The card still has some play to it with the combination of discard spells. Like being able to discard a Burning Wish and then target it with Surgical Extraction is pretty brutal and forces us to use an Empty the Warrens. In the sideboarding section I will address this, but for now, we just have to be aware this is a card we may play against because it’s not as obvious.

Traditionally vs blue decks, it was about playing a longer game to play around soft permission, and not force yourself to combo into countermagic. Nowadays control decks spend the first couple of turns of a game in development and set up and have less interactive cards on the first turn. They have slower disruption like Hymn to Tourach and Kolaghan’s Command. Grixis Control tends to be light on disruptive cards, but with so many cantrips they are able to find these cards rather easily. The best way to win this matchup is often to get under them. Trying to combo off before they’re able to set up with their cantrips and use their disruption. Playing a slower game where they can cast Hymn to Tourach and then flash it back with a Snapcaster Mage is just a nightmare. Our key turns of the matchup are about 2-3. A quick hand with 1 discard spell is our perfect recipe here.

Against a deck with many discard spells, and trying to get card advantage, we can’t afford to be doing that to ourselves with Chrome Mox. Grixis Control also plays Kolaghan’s Command. They may not have many post board, but trying to keep an artifact around for many turns in play is quite a liability. Past in Flames is how we go about trying to play a longer game if we need to. If the opponent has a discard heavy draw then we can use Past in Flames to get back and reuse those resources. Sometimes we just aren’t left with enough resources to be able to combo off. Trying to Burning Wish and use Past in Flames in the same turn is often asking for too much. Just naturally drawing it is great here. Bringing in the Tendrils of Agony is a nod of respect that there’s a good chance the opponent brings in Surgical Extraction. While typically Surgical Extraction isn’t a great card vs TES people still bring it in and if they catch a Burning Wish we don’t want to be obligated to combo off with an Empty the Warrens. We need both of our win conditions available.

Onto an example game!

My opponent leads off with a first turn Thoughtseize, and takes my Duress. Once the turn comes back to me I immediately draw another Duress and cast it. It is clear he is now on Grixis Control. 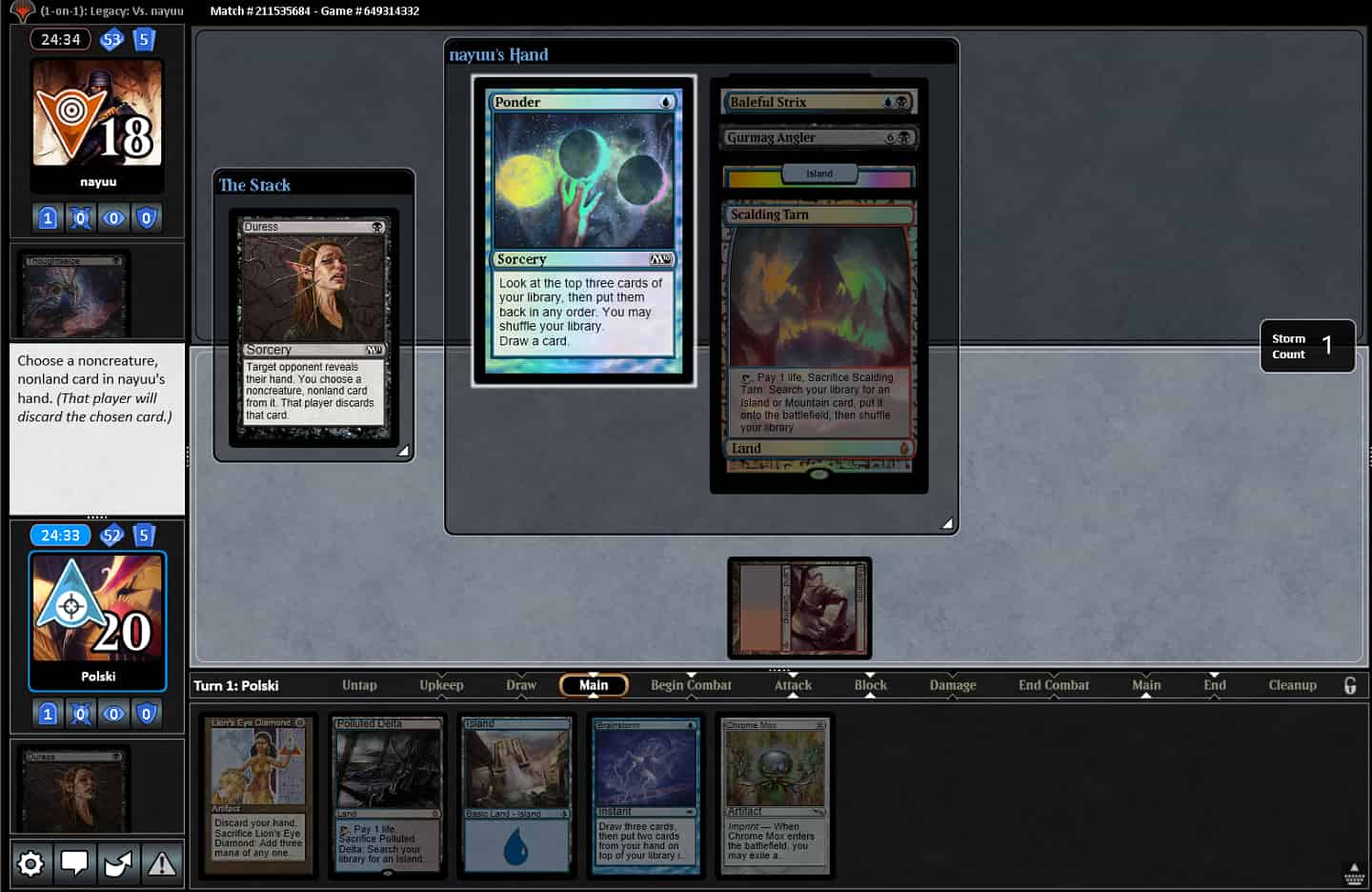 I don’t have any options, so I take his Ponder. The coast is clear. I just need to find my combo before he can put on a clock or find more permission. A couple turns later and my opponent puts some creatures into play, draws some cards, and I fire off my Brainstorm looking for the combo. 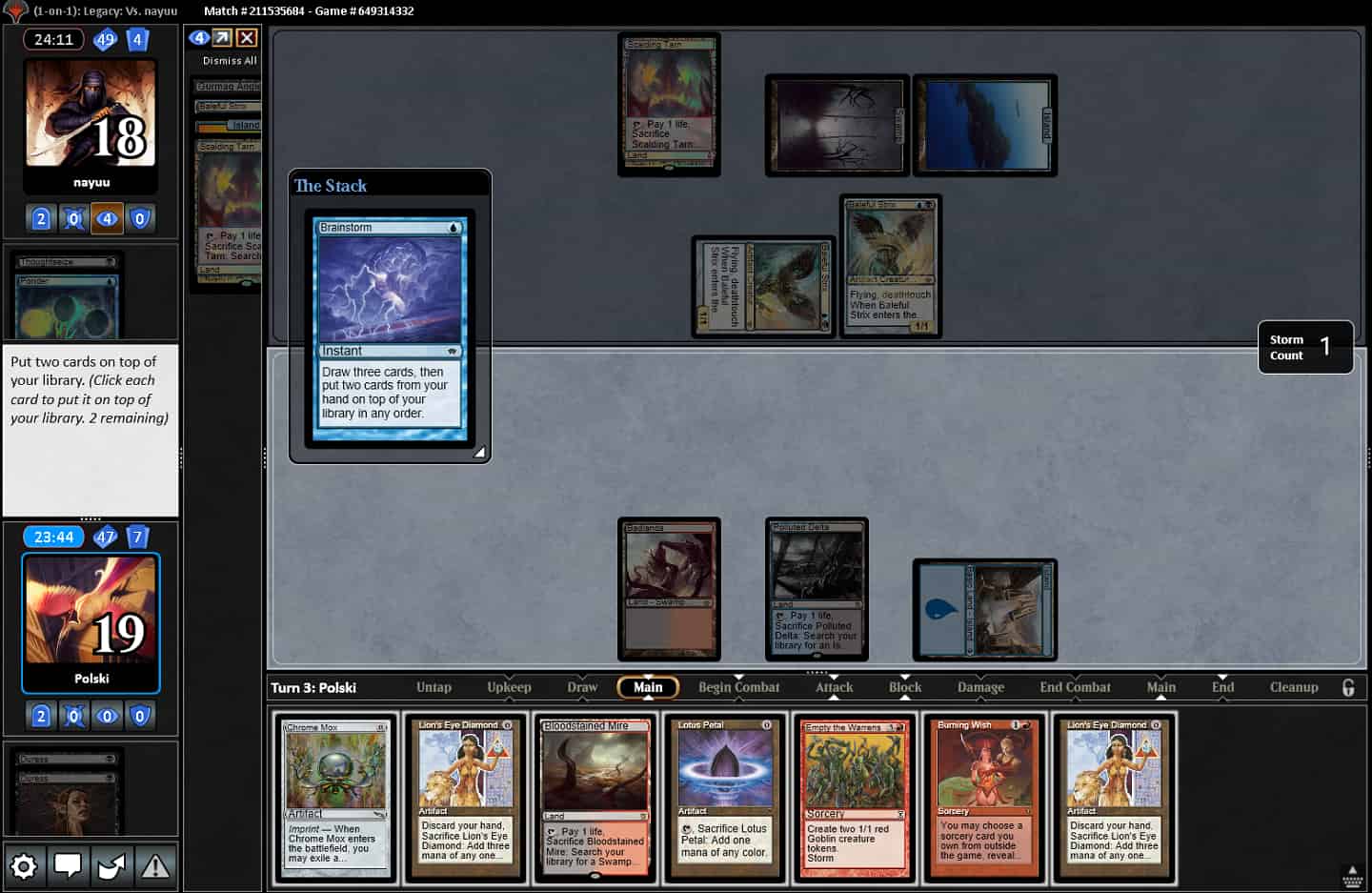 Ultimately, I think I messed up here by not just going for an Empty the Warrens by using the 2 lands, Chrome Mox imprinting Burning Wish, and the Lotus Petal. I opted not to in fear of them having several creatures. Looking back now I think I could have easily have won this way, but I was mentally focused on trying to win with this Burning Wish. I ended up putting the Burning Wish on top of my library to protect it from a discard spell and pass the turn back. Luckily, because he top decked a Hymn to Tourach and it takes my Empty the Warrens. On my next turn I use all of my mana and sacrifice both copies of Lion’s Eye Diamond to cast Burning Wish for Dark Petition into Ad Nauseam. 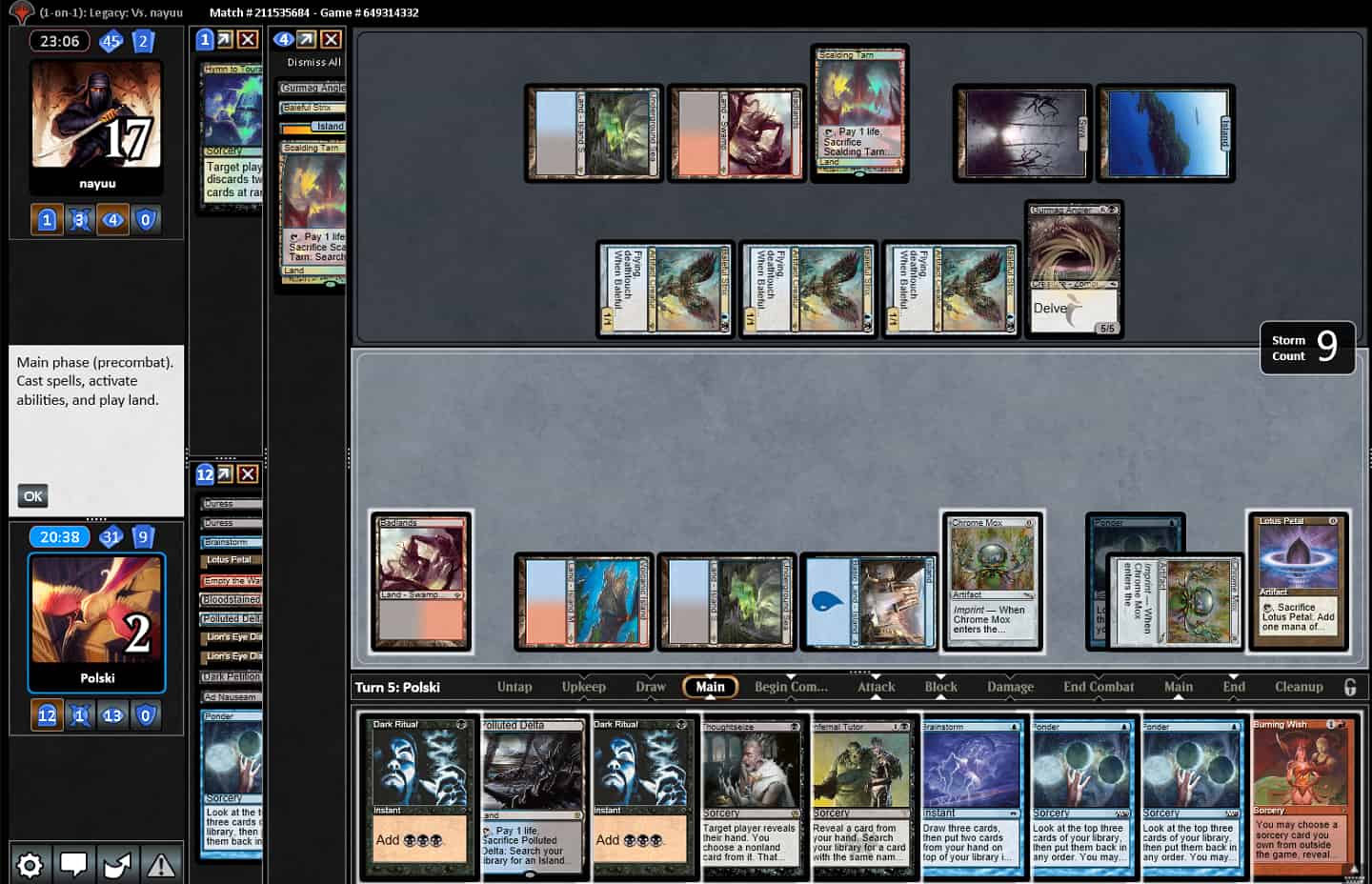 Fromt this point I had exactly 6 mana with the 2 artifact mana in play and 2 copies of Dark Ritual for Burning Wish into Tendrils of Agony with enough storm.

I sideboard exactly how I mentioned above and we are off to game 2 with my opponent being on the play. We both lead our first turns off with cantrips and then I get to my second turn and have a decision to make how I am going to move forward with this game. 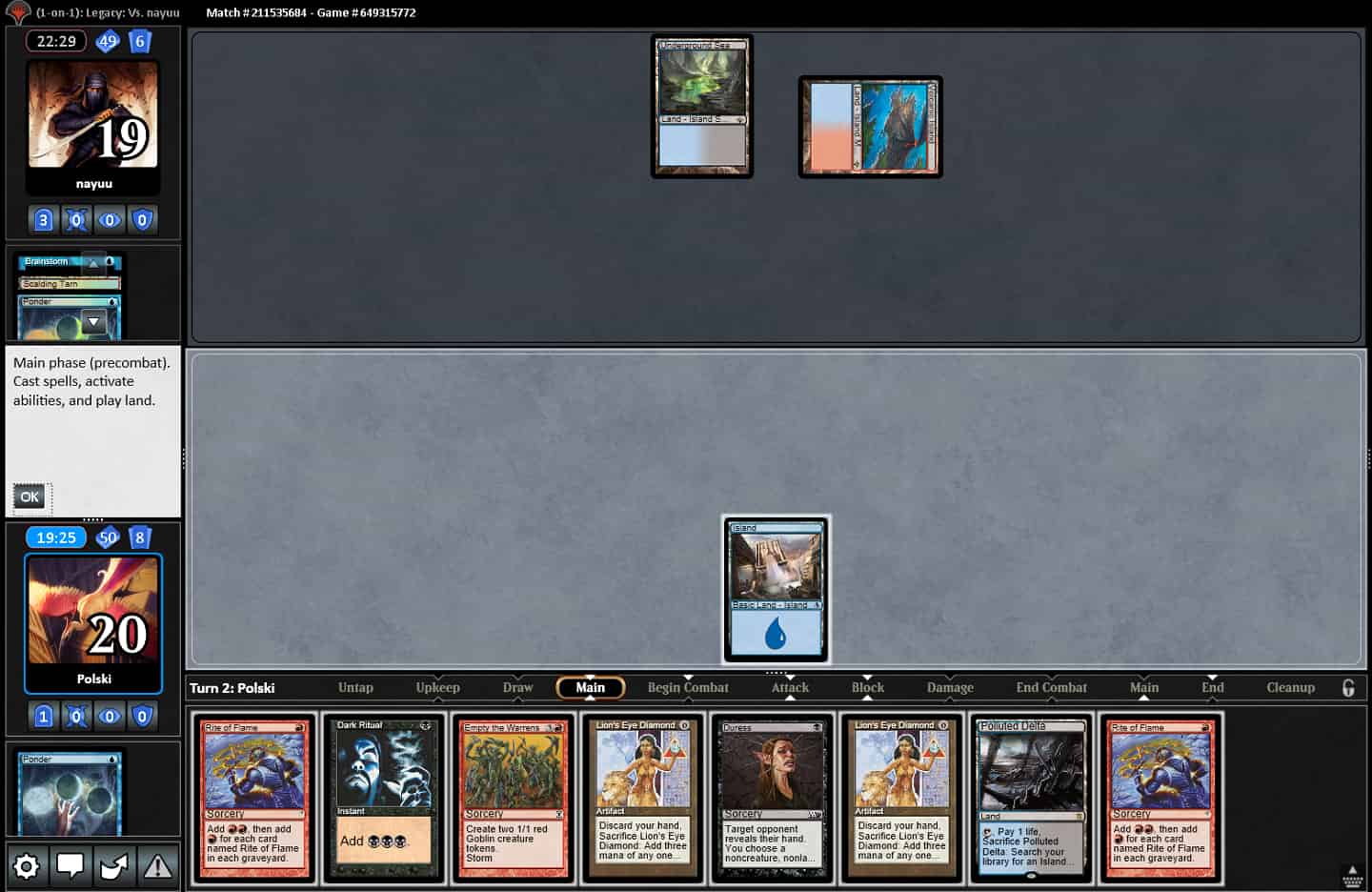 I am in a tough situation here. Because of the basic Island in play I don’t get access to both black and red mana this turn, so I can’t cast my Duress and Empty the Warrens. I have to choose between a couple of options here. I can go with a slower Empty the Warrens and Duress now to check his hand, cast Empty the Warrens now and risk losing to a Flusterstorm or sweeper effect, or just shuffle the Empty the Warrens away and hope for a tutor in the next couple draw steps.

I ended up going with the second option and just going for the Empty the Warrens now. I didn’t want to risk letting my opponent have another turn for a Hymn to Tourach, cantrip into another answer, or anything else. I just wanted to try to play under them and allow myself to lose to 3-4 cards between a sweeper or a Flusterstorm. The Flusterstorm also would have to be in their hand and not on top of their library since they couldn’t Brainstorm into it right now. This line also lets me beat a Force of Will. Mid combo my opponent decides to use a Surgical Extraction on my Rite of Flame. This cuts me off 1 mana now since it won’t be in the graveyard when my second one resolves. Not a bad play, but it does up my storm count by 1. I don’t think that’s super relevant since they don’t have the capability to go wide with creatures. Luckily, the 1 mana that I lose doesn’t prevent me from casting Empty the Warrens though. 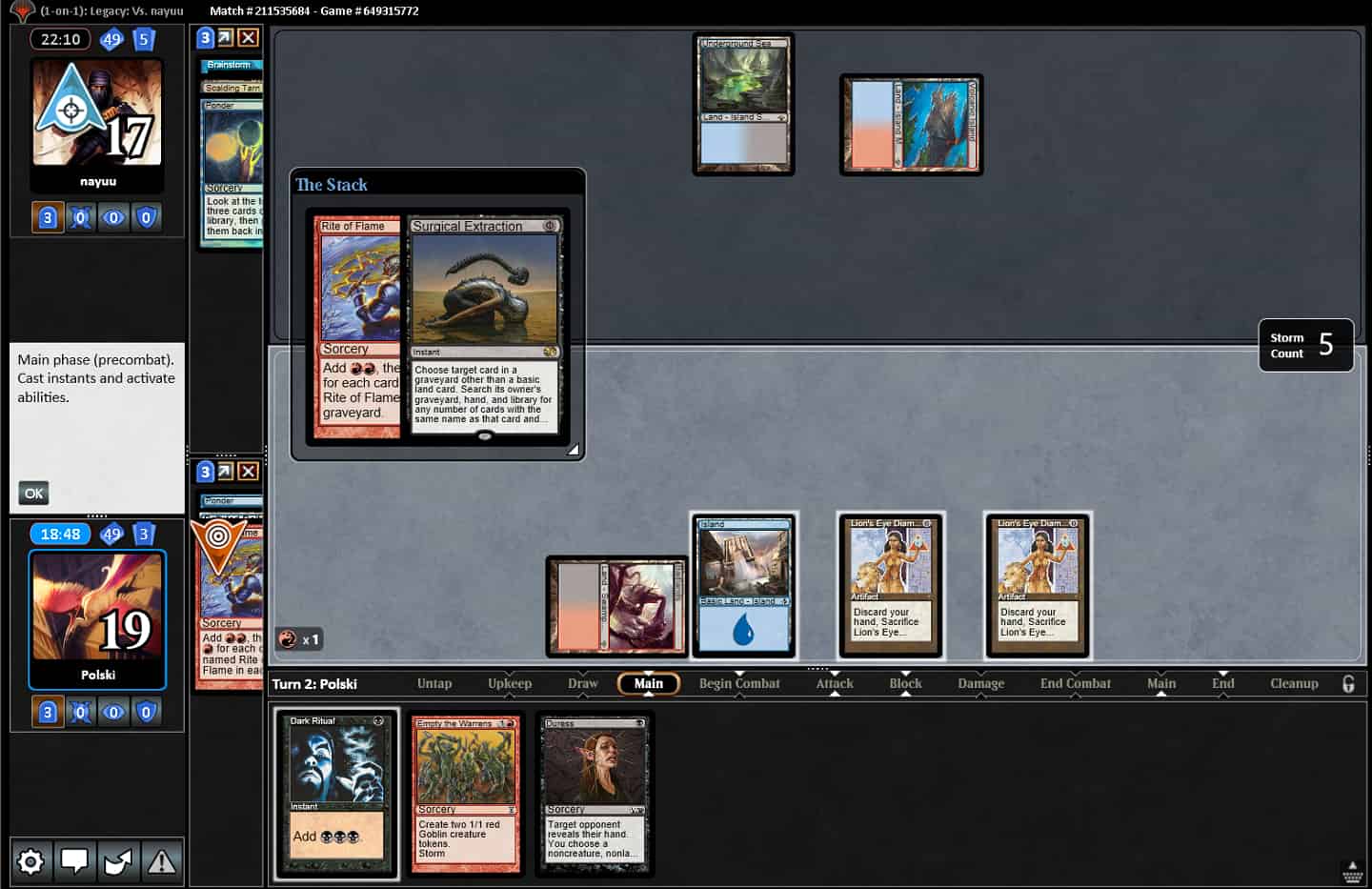 More good news is that the opponent doesn’t have a Flusterstorm and Empty the Warrens resolves. The opponent takes a couple draw steps, uses a cantrip, and then casts a Vendilion Clique to keep digging for a sweeper. They never find one and that’s the game. 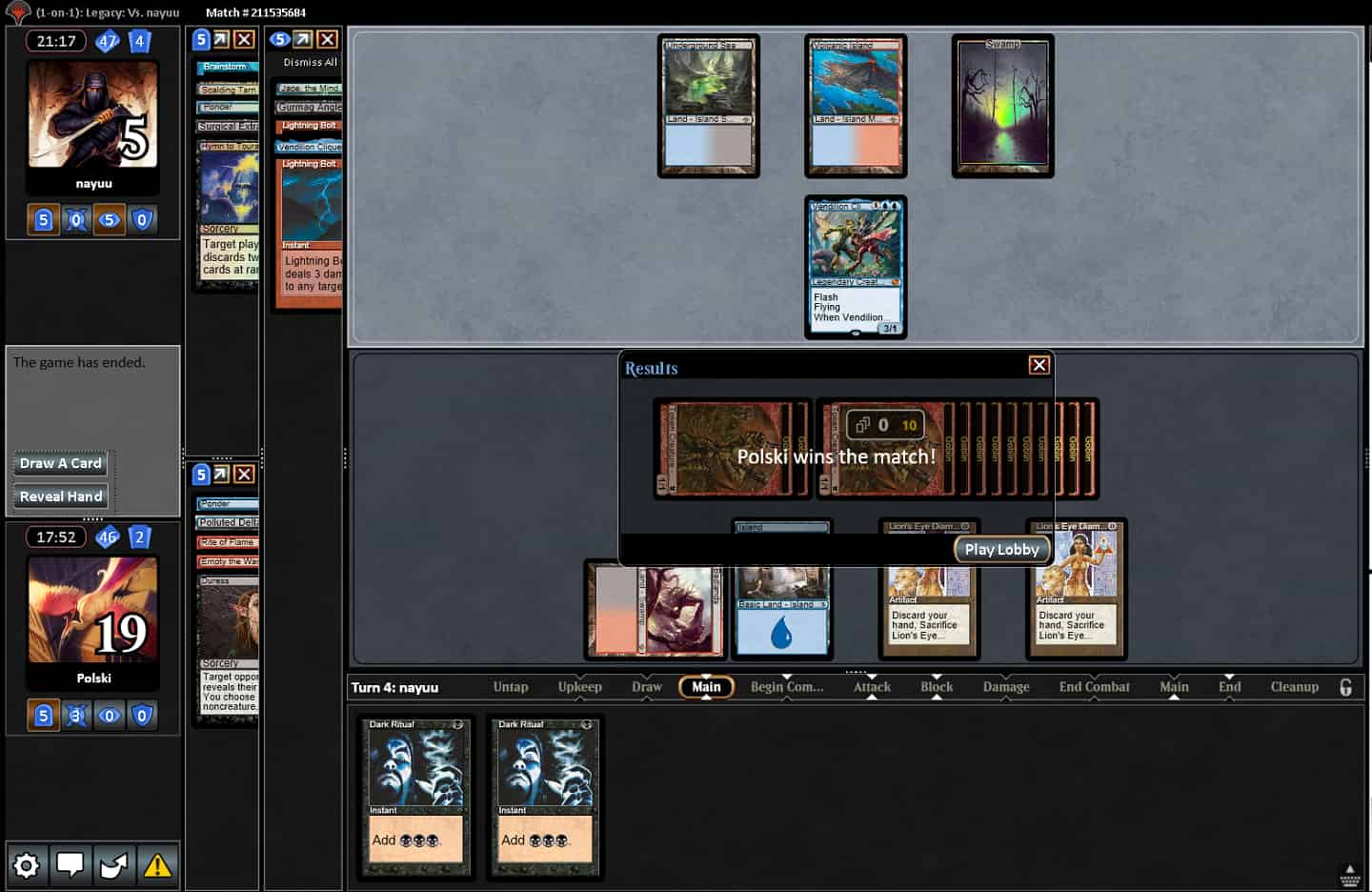 This match definitely demonstrated one of my weaknesses when playing Storm is that when I see a line I immediately put all of my focus into that line. It’s definitely a skill to be able to see a line, but then to keep an open mind about other potential lines as context changes. Too many times we see a play and focus on keeping that same game plan across multiple turns instead of reanalyzing after each change of game state. Another great thing to keep in mind is balancing what you beat vs what you lose to. I won the second game by taking the chance to lose to a couple of cards in order to beat the vast majority of his deck. You can’t always wait until you have the 100% assured win. This was one of those times. TES is about the balance and being the aggressive player. Sometimes you just jam.