Ever since the printing of Hogaak, Arisen Necropolis in the Modern Horizons set, people have been trying to abuse this card in both Modern and Legacy. In order to get the most out of Hogaak, Arisen Necropolis, the entire deck is built around the graveyard. It does this by using cards like Hedron Crab, Stitcher’s Supplier, and Careful Study to fill the graveyard. Once the graveyard gets full, the plan is to recur cards like Gravecrawler and Bloodghast. This will then snowball and bring back Vengevine and tokens from Bridge from Below. Once there are enough creatures are on the battlefield, then casting Hogaak, Arisen Necropolis becomes very easy. The card that puts this deck over the top is Altar of Dementia. Once creatures are in play with Altar of Dementia, you can sacrifice them to mill yourself and keep the snowball rolling. Ultimately, once you’ve milled yourself several times and keep sacrificing and replaying creatures from the graveyard, there will be enough power from the Bridge from Below tokens to completely mill out the opponent. This deck is quite powerful, and even got a ban in Modern after taking over the format. Let’s see how Hogaak lines up against The EPIC Strom (TES).

How does Hogaak matchup against TES?

Hogaak, Arisen Necropolis, Bridge from Below, Altar of Dementia – This is the combo! With these cards all interacting together, it’s pretty much game over. This will give them the resources needed to mill themselves to find the missing cards they’re looking for to get a ton of power into play. Once there’s enough power in play, they can just mill us out with Altar of Dementia. Against most decks, this combo is hard to prevent from assembling because Bridge from Below and Hogaak, Arisen Necropolis can’t be countered effectively, both want to be in the graveyard, and destroying an artifact can be difficult. At the end of the day, it is a three-card combo, so it can be slower to assemble. We match up fairly well against this because we aren’t trying to interact and disrupt this. TES is just going to be trying to race and win the game before they can assemble it. Against most combo decks, we use discard spells to try and slow the opponent’s deck down until we can combo off, but unfortunately the only card we can really take out of these three is the Altar of Dementia.

Vengevine, Bloodghast, Gravecrawler – These are the creatures that can be brought back from the graveyard to trigger Bridge from Below and the ability to cast Hogaak, Arisen Necropolis quickly. The scary part is that when combined with a sacrifice outlet, it allows them to keep recurring these creatures for more Bridge from Below triggers.

Cabal Therapy, Veil of Summer – These two cards are the main way the Hogaak deck interacts with us. Occasionally, I’ll see them bring in some graveyard hate or Surgical Extraction, but those rarely end up mattering. Cabal Therapy and Veil of Summer are real threats. Cabal Therapy is good because not only can it set us back, but it also advances their combo by being a sacrifice outlet. Veil of Summer has blown me out a few times due to hexproof from Tendrils of Agony. The biggest factor of how good it is against us is knowing whether or not they have it. After an Ad Nauseam resolves, always try to use a discard spell first to make them use it. That way you can build up a higher Storm count and Burning Wish for Grapeshot.

The key turns of this matchup are turns1-3. In terms of turns, these games will go very fast. The goal of both players in this matchup is just to race and win before the other does. For TES, we have this advantage here because Hogaak tends to win around turn three. Our goal is to beat that. If we can consistently win with Tendrils of Agony before turn three, then I like this matchup. The tricky part here is that Empty the Warrens usually isn’t good enough, and I don’t like to rely on it unless it’s turn one on the play. They just get outclassed by several 2/2 zombie tokens from Bridge from Below. Their primary way of preventing us from winning before turn three is Cabal Therapy. They key to beating any type of discard spells is to protect our most valuable cards. This means playing our Lion’s Eye Diamond and using cantrips to protect our best cards on the top of our library until the time to combo off.

I lost the die roll and started the game off with a mulligan, but ended up with a decent six. I had plenty of mana, lands, and a cantrip. I just needed to find a tutor here and I could win the game fairly easily. The opponent led off with a Hedron Crab and then passed the turn back to me. I assumed they were going to have an explosive turn two, so I needed to find a way to win immediately. I cast my Ponder looking for something, but the top three cards weren’t very good, and I chose to shuffle. I got lucky and drew Burning Wish after the shuffle. 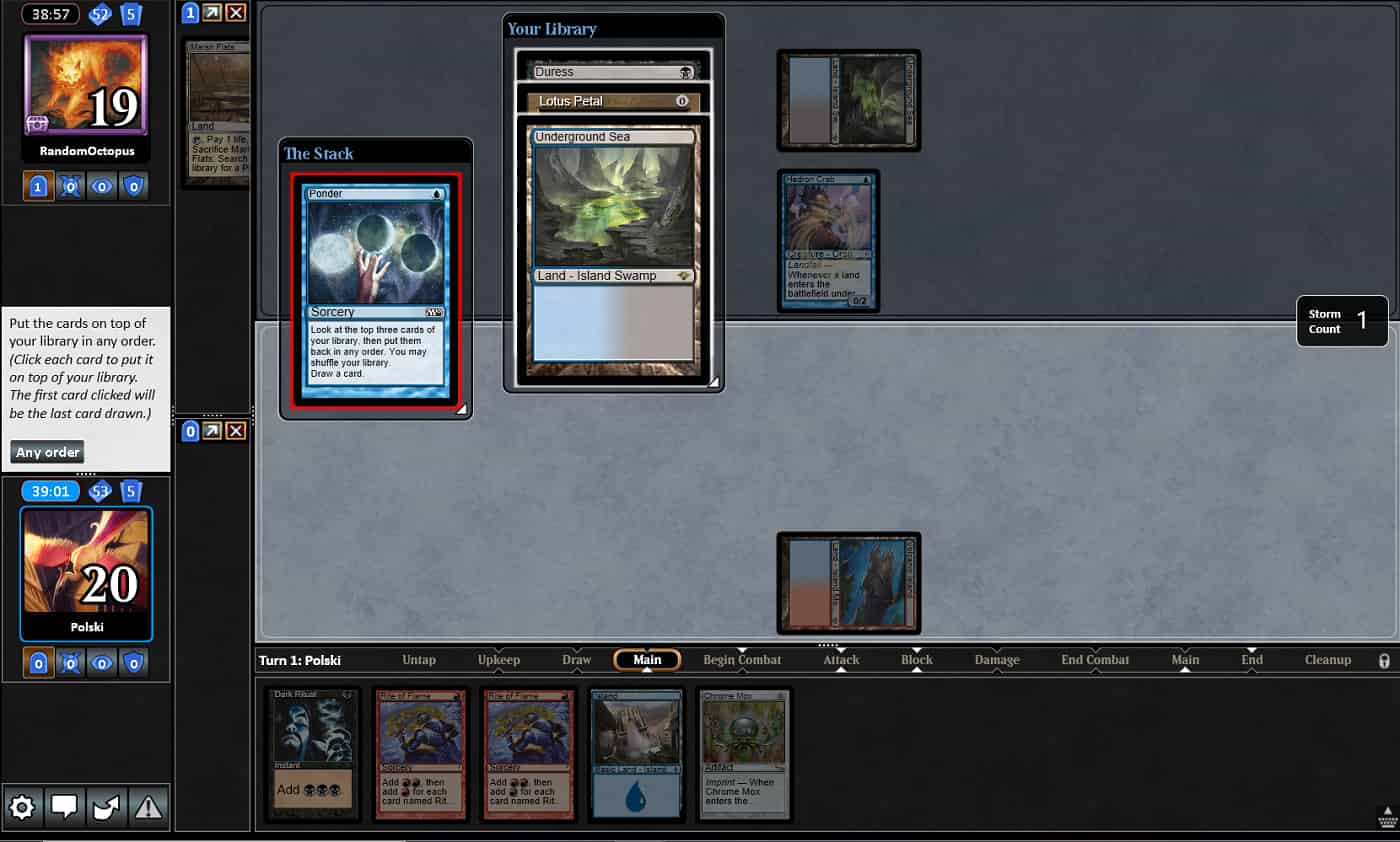 My opponent played out a fetch land to get two Hedron Crab triggers. That, combined with a Stitcher’s Supplier allowed them to fill their graveyard with Bloodghast, and put Gravecrawler and Hogaak, Arisen Necropolis into play. They then passed the turn back and I needed a good top deck. I was pretty sure if my opponent got another turn that I would die. I took my draw step and it was a Thoughtseize. 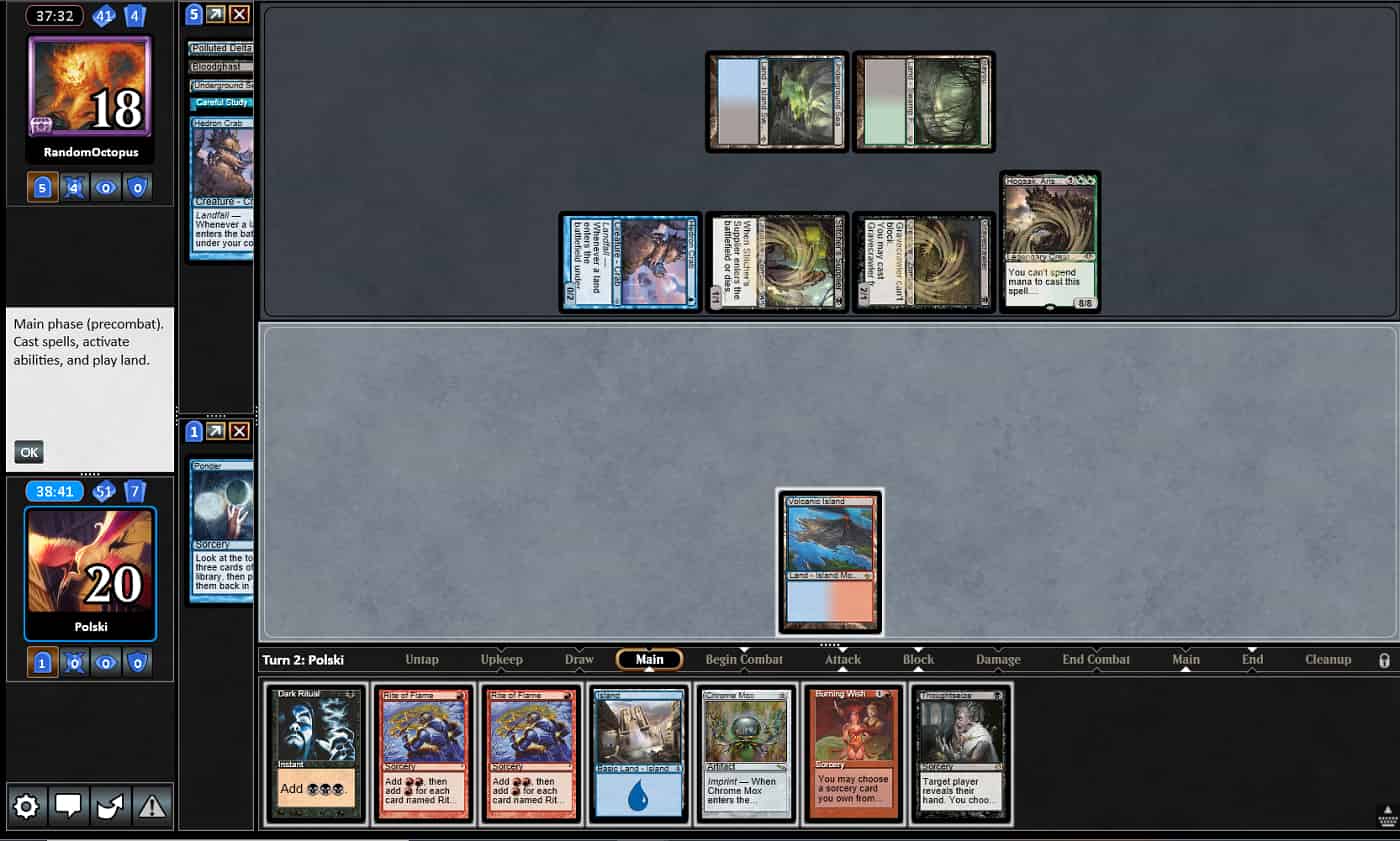 I played out my second land and cast Burning Wish and grabbed Dark Petition. The plan was to win on the following turn by using Dark Petition for Ad Nauseam. I just had to pass the turn back and cross my fingers that I didn’t die on their third turn. 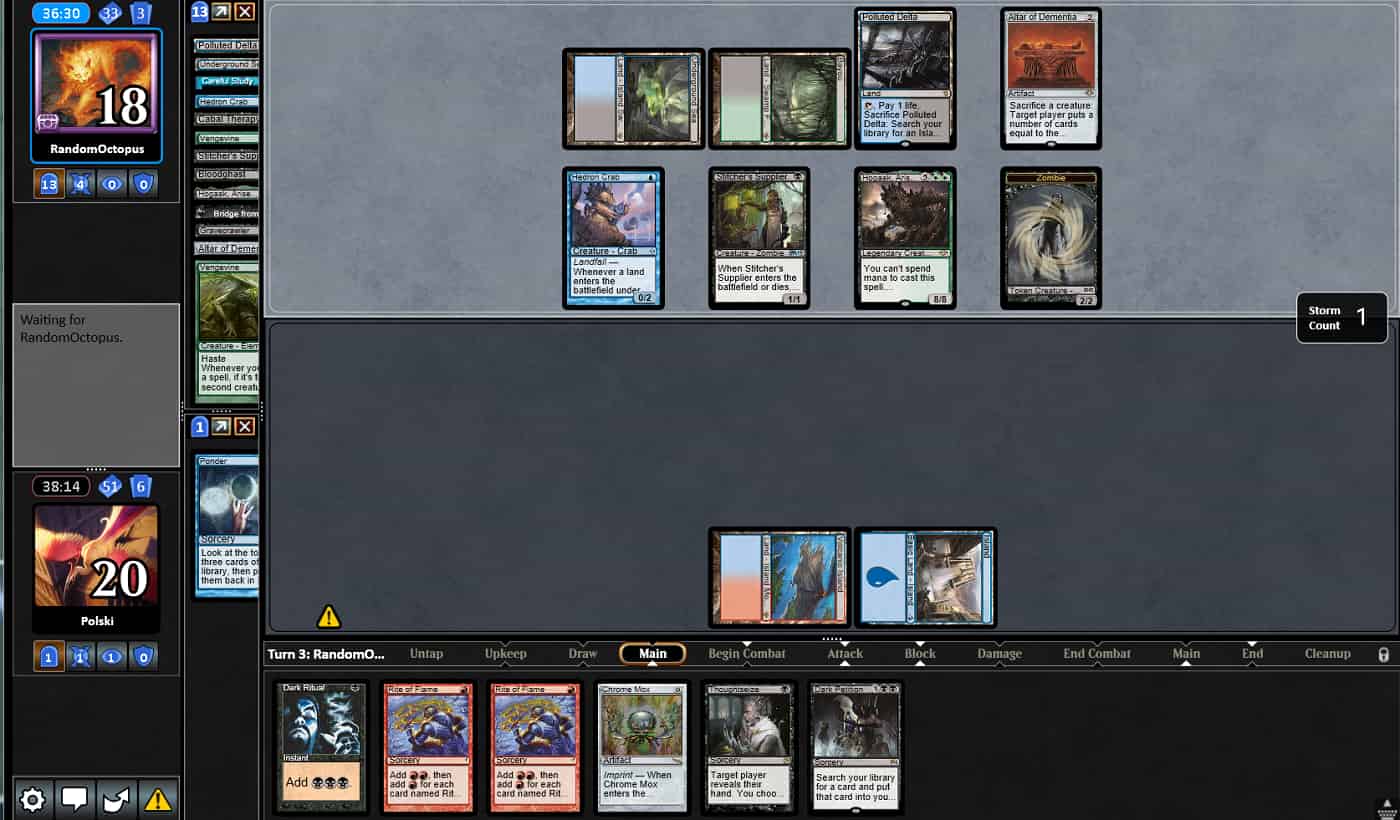 Unfortunately, my opponent played an Altar of Dementia and another land to trigger the Hedron Crab. That gave them enough ways to put cards into the graveyard that they then milled a Bridge from Below and a Vengevine. Being able to sacrifice their creatures and return them gave them enough power from Bridge from Below to mill themselves enough times to then eventually mill me out of the game.

I sideboarded exactly like I mentioned in the sideboarding section and chose to be on the play for the second game. I kept my opening seven with two copies of Tormod’s Crypt, lands, and rituals. I just needed a tutor to win. On my first turn, I played a land and a Tormod’s Crypt and passed the turn. For my second turn, I cast Burning Wish and got Dark Petition. I was hoping that Tormod’s Crypt would slows them down just enough for me to win the game. I also didn’t play out the second one in case I drew a Brainstorm and wanted to put it back. My opponent also might have played differently if they knew they only needed to fight through one Tormod’s Crypt instead of two. 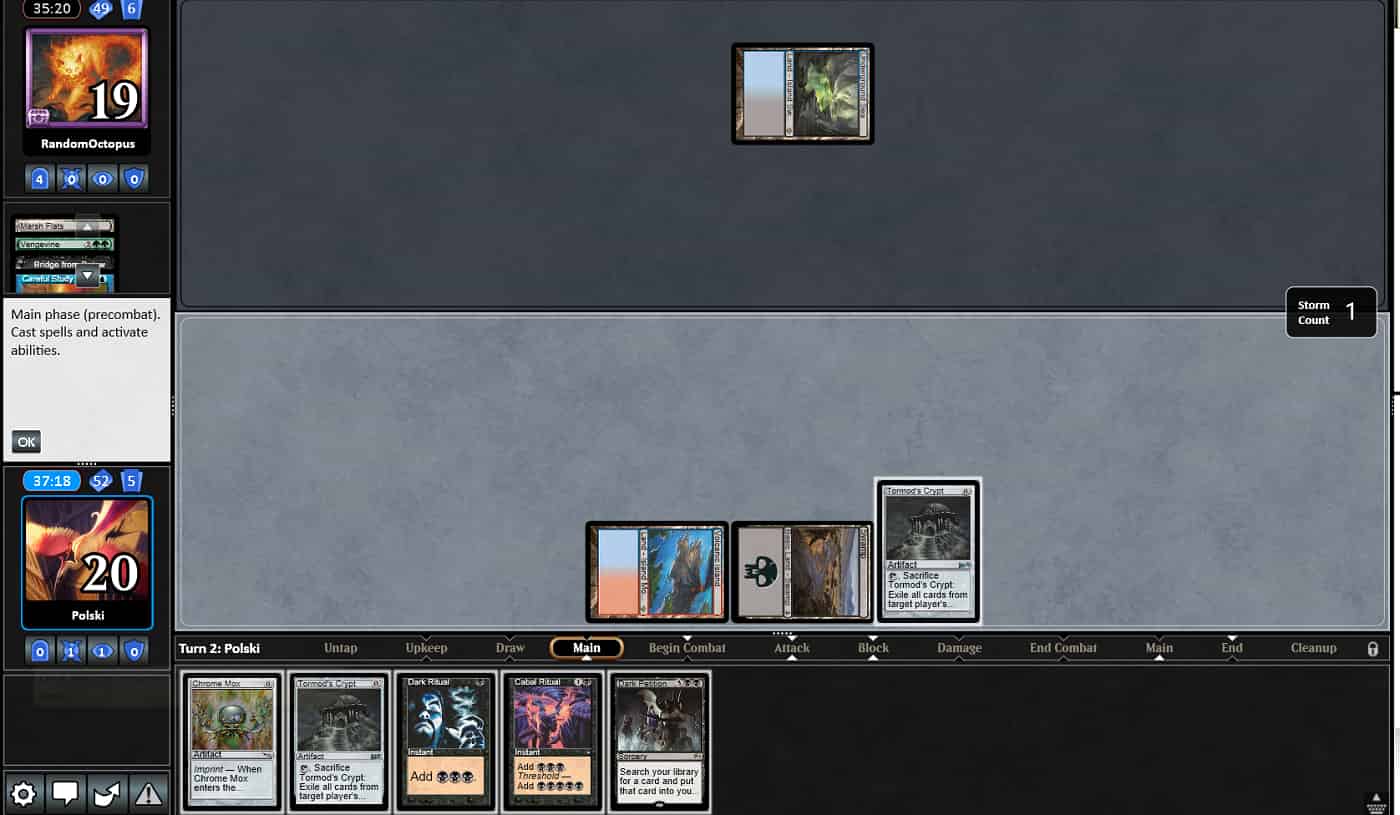 On my opponent’s second turn they cast Cabal Therapy. They obviously knew I had Dark Petition because I revealed it off of Burning Wish, and that’s exactly what they named. 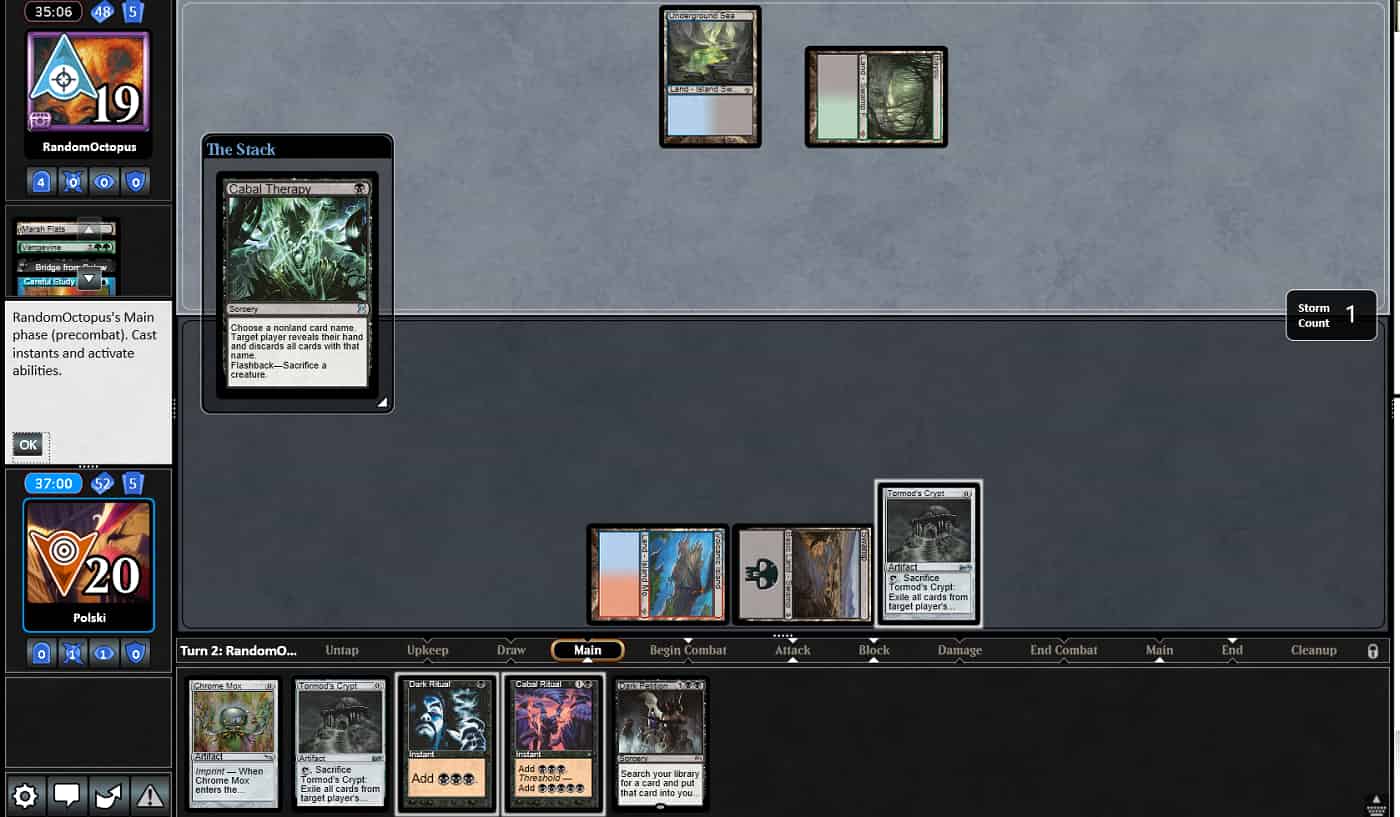 Now that I don’t have a tutor anymore I needed to find a cantrip to find one or naturally draw one. Thankfully, this Tormod’s Crypt is doing work and my opponent is playing very slowly. Eventually, I was able to draw Infernal Tutor and I had enough mana for the opponent to concede. 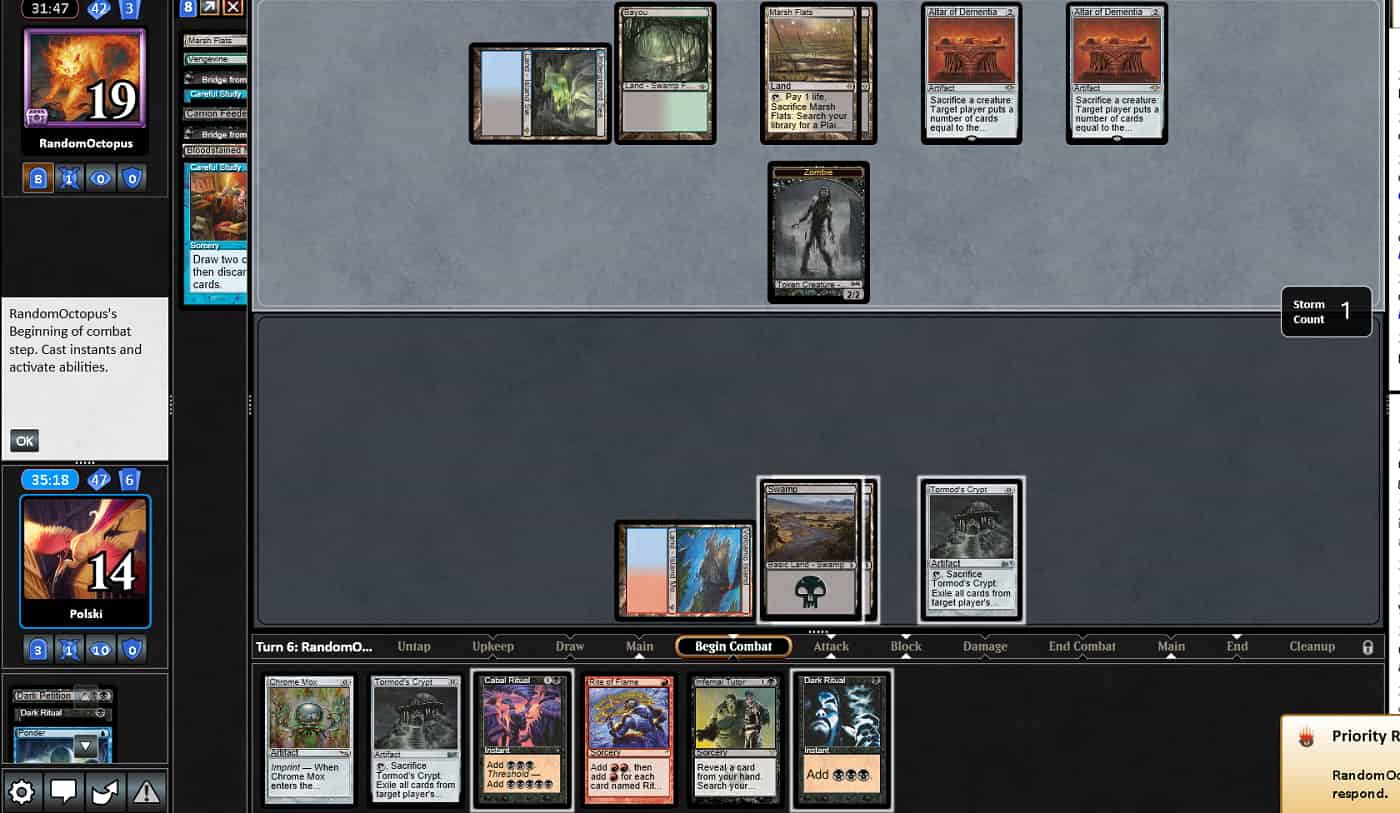 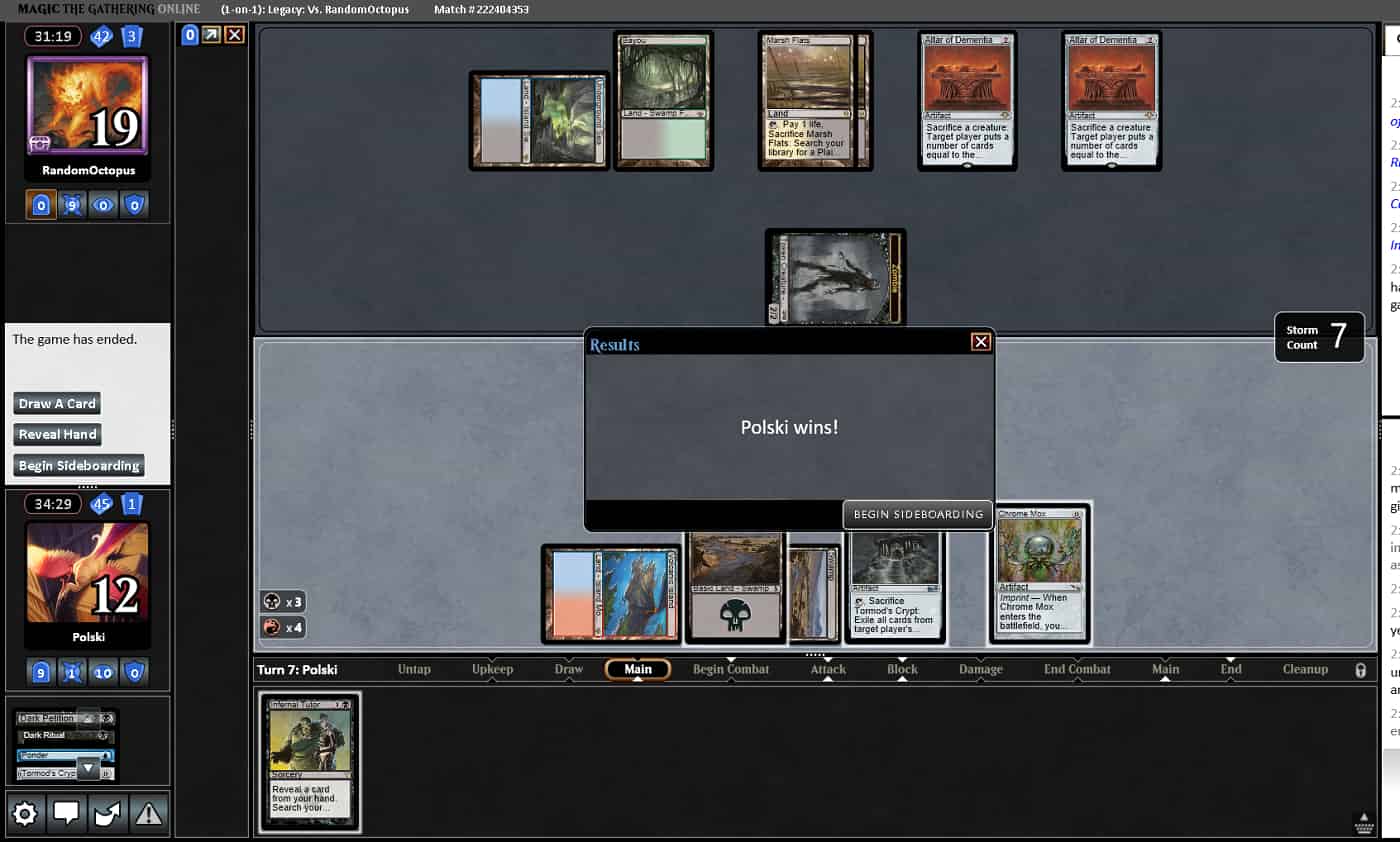 For the third game, my opponent wisely decided to be on the play. I kept a fairly decent hand with lands, rituals, and an Infernal Tutor. The only downside here is I also had two copies of Chrome Mox and not that many extra colored spells to imprint. As long as I drew spells, I had a very fast kill. On my first draw step, however, I drew a third Chrome Mox. 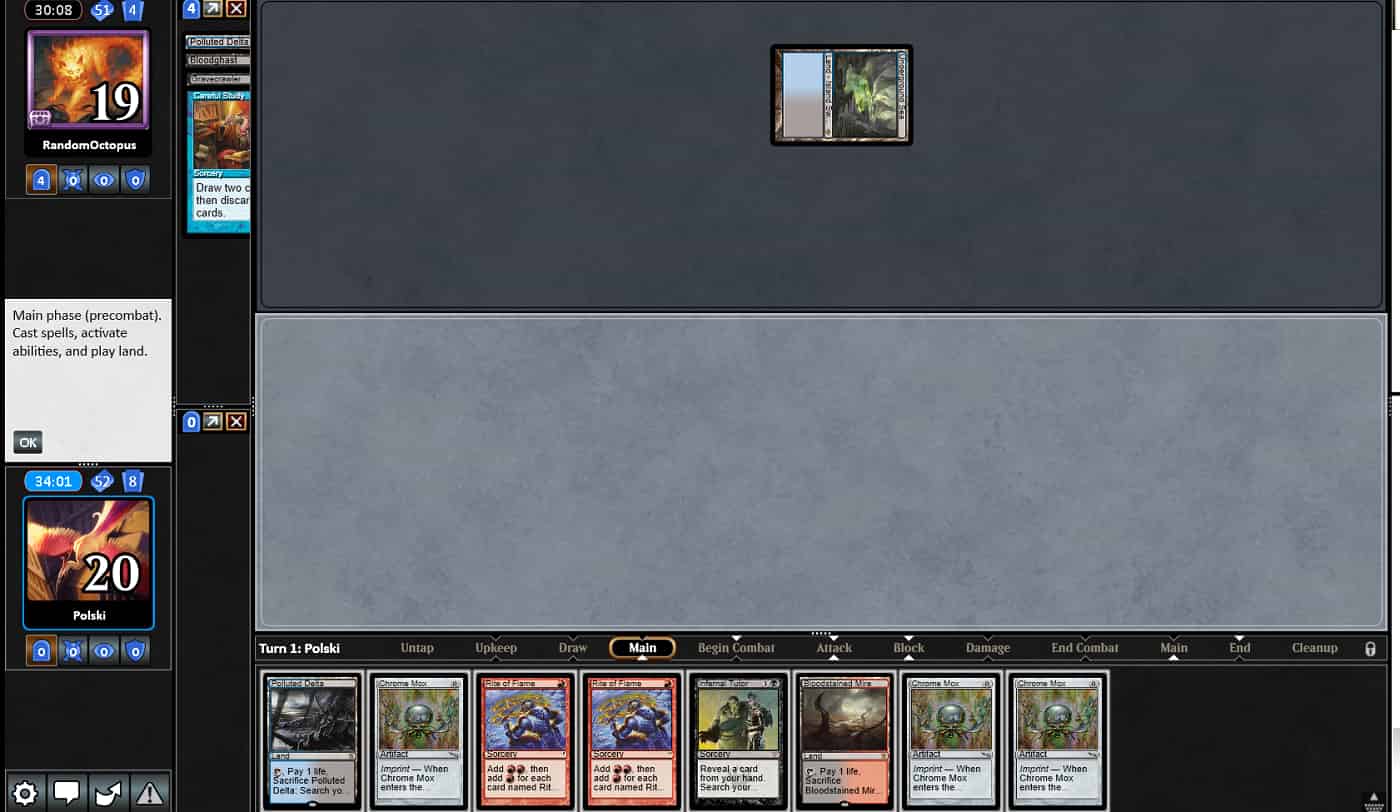 That was definitely one of the worst draws in my deck. My opponent had one of their good, and consistent, draws and was able to set up on turn two for a turn three win. They had Altar of Dementia, Gravecrawler, and Bridge from Below in the graveyard, and that was enough to get their graveyard going to snowball into a win. 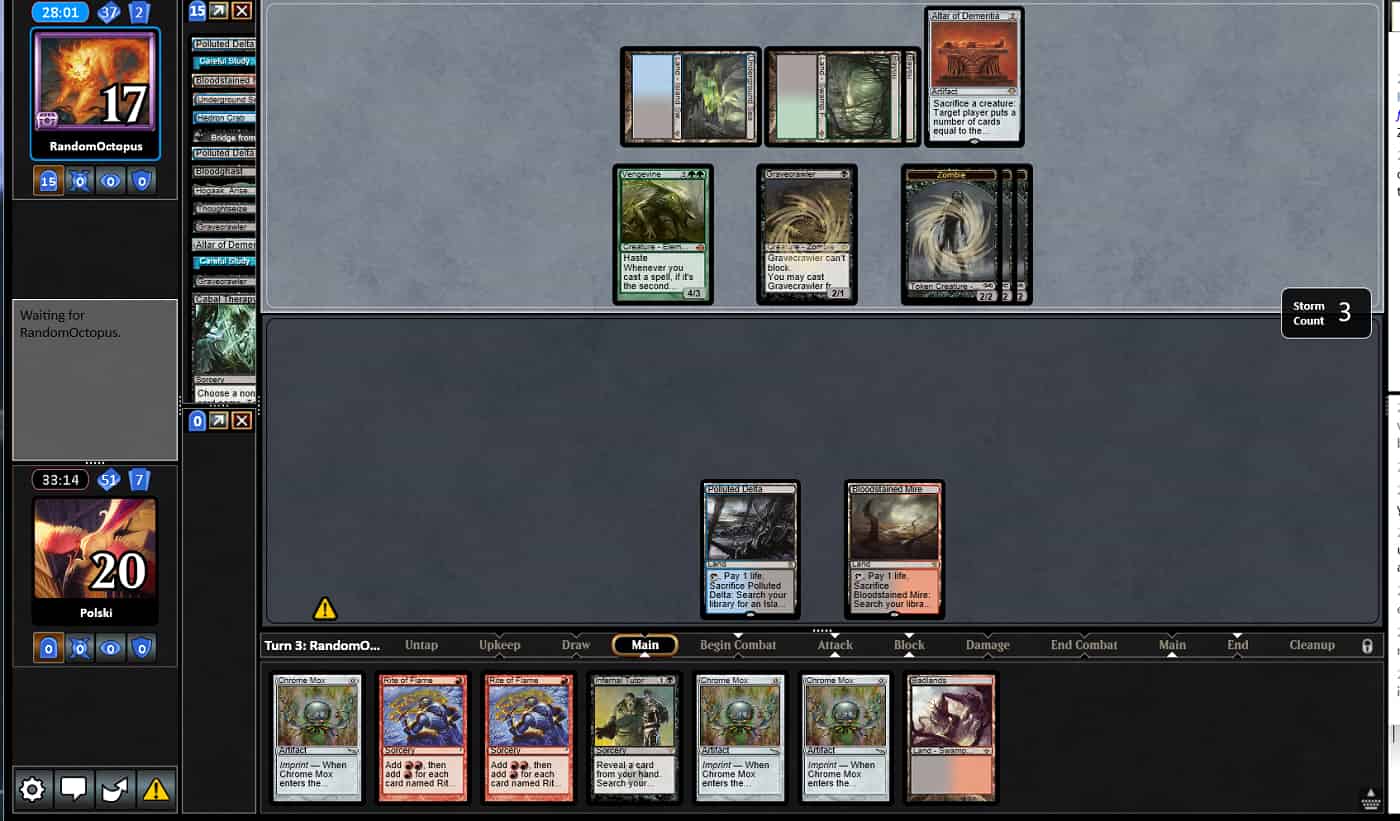 Even though I lost this example, I think this matchup is heavily favored. I have at least a 60 percent win rate against the deck due to it being slower with very little interaction. This was still a good example game though because it showed what happens when we lose. Sometimes the best way to win is knowing how you could lose. In this example, it was about not having the tutor cards I needed, and when I did have them, I didn’t protect them from discard spells well enough. I’m unsure if Hogaak is the real deal and will be a major player longer-term in Legacy, but I certainly hope so because it’s a fun deck to play and a good matchup for TES!