It is time for yet another edition of the TES Matchup Battles series and this episode we take on Lands!

Jarvis Yu, one of the most well known Lands players, best describes Lands as a Life from the Loam deck.

“With the ability to both recur lands and ‘draw’ three cards a turn by dredging, Life from the Loam allows the deck to operate. Most often used to recycle Wasteland after Wasteland to take all mana away from opponents, Life from the Loam also helps to find the deck’s other unique lands, which draw from all of Magic’s history to form a surprisingly versatile engine.”

The goal of Lands is to assemble a Life from the Loam engine to generate lots of value from some of Magic’s most powerful lands. They try to disrupt and kill the opponent with these lands, hence the deck name. Lands tends to prey on the Delver of Secrets, fair and blue decks because of their ability to out card advantage the opponent and use powerful removal spells by assembling the Punishing Fire combo. Luckily for us there are not a lot of powerful lands that are good vs combo decks, but with all that being said this matchup is still no bye and we need to be prepared. With the rise of all the different variations of Delver of Secrets and 4C Control decks I think Lands is on the upswing, and we need to be ready.

How does Lands matchup against TES?

Wasteland, Rishadan Port – Beating these type of cards is going to be more about your skill in legacy and not so much about the matchup in particular. Some hints to beating these cards is fetching the basic Swamp and/or Island if you can afford to. That is why they are there, but not all hands allow you to do this, so making this evaluation of when you can afford to will be key in beating Wasteland in all matchups that have it. Rishadan Port is less good and easier to beat because if the opponent is porting us then they aren’t progressing their game as fast as they could be, and they may not port us every turn.

Dark Depths, Thespian’s Stage – Their win condition. Lands used to have a reputation of killing very slowly and taking its time, but since the printing of Thespian’s Stage they can very quickly now and it’s something to keep in mind. We can no longer keep very slow hands and rely on them not being able to kill us in the early turns. That is no longer the case. Some games they may have zero disruption, but a turn 3 or 4 kill and can come down to a race.

Sphere of Resistance – Time for the real hate cards. This card may seem out of place in this deck because it can hurt them and slow them down as well, but the matchup is such in our favor that they need to play this card. It’s very hard to win if this card resolves, so while it may not be obvious that we need to board to cards like Echoing Truth or other artifact hate if you’ve never seen their deck list, but almost every Lands deck has at least 4 of this type of effect in their sideboard because the matchup is just that bad for them.

TES is great at being a fast and consistent deck and being able to kill through multiple different angles like goblins or straight to the life total. In some matchups, one method of comboing is better than others, and that is true here. Like I have previously mentioned Empty the Warrens is not great in this matchup because the opponent can kill very quickly with a Marit Lage and The Tabernacle at Pendrell Vale. This means the next two kill options being Tendrils of Agony, and my personal favorite option, Telemin Performance. Tendrils of Agony is a more assurede kill, but can be a turn or so slower because it can take more resources or mana, while Telemin Performance has a risk factor. Game 1 it is a guarantee kill, but postboard the opponent has access to Tireless Tracker. They usually won’t bring it in unless they have already seen a Telemin Performance, unless they know you’re playing it, but it’s usually only effective 1 time.

For the decks with The Tabernacle at Pendrell Vale, like Lands, I sideboard out Empty the Warrens. It’s too risky of a plan to actually pull off without them finding an answer, and like previously mentioned it is pretty easy for them to either have an answer, or be able to race with a 20/20. I cut a couple copies of Ponder because the opponent could have Chalice of the Void or Sphere of Resistance effects and you often don’t have time to mess around with a hand full of cantrips. I bring in the 3 Echoing Truth to deal with all their lock pieces, and in a pinch can bounce their 20/20.

Side note:
Lands decks often play a main deck Bojuka Bog that can be tutored for with Crop Rotation – this makes Past in Flames and Dark Petition a huge liability as it can catch you off guard, so our Burning Wish become quite weak in this matchup as it really only gets Telemin Performance, but it’s a game winner. I leaving the 3 Burning Wish in, but you could convince me to trim them once the opponent has already seen Telemin Performance.

In game 1 we are a heavy favorite. They have very little disruption and can’t kill as quickly as we can, so game 1 is a must win because it’s usually our “free game” since it gets much harder post board. This one requires no picture, because I look at my opening 7 and have a typical TES hand, a turn 1 Ad Nauseam with 1B floating from 18 life and have the easy kill. Off to the tougher games and I sideboard like mentioned above.

I keep my opening 7, and my opponent mulligans to 6 and then scrys to the top. I have a very quick hand, but no disruption or card selection, but I do have a Gitaxian Probe and fire it off immediately and this becomes my hand.

The Gitaxian Probe reveals his hand and we see a pretty good one. 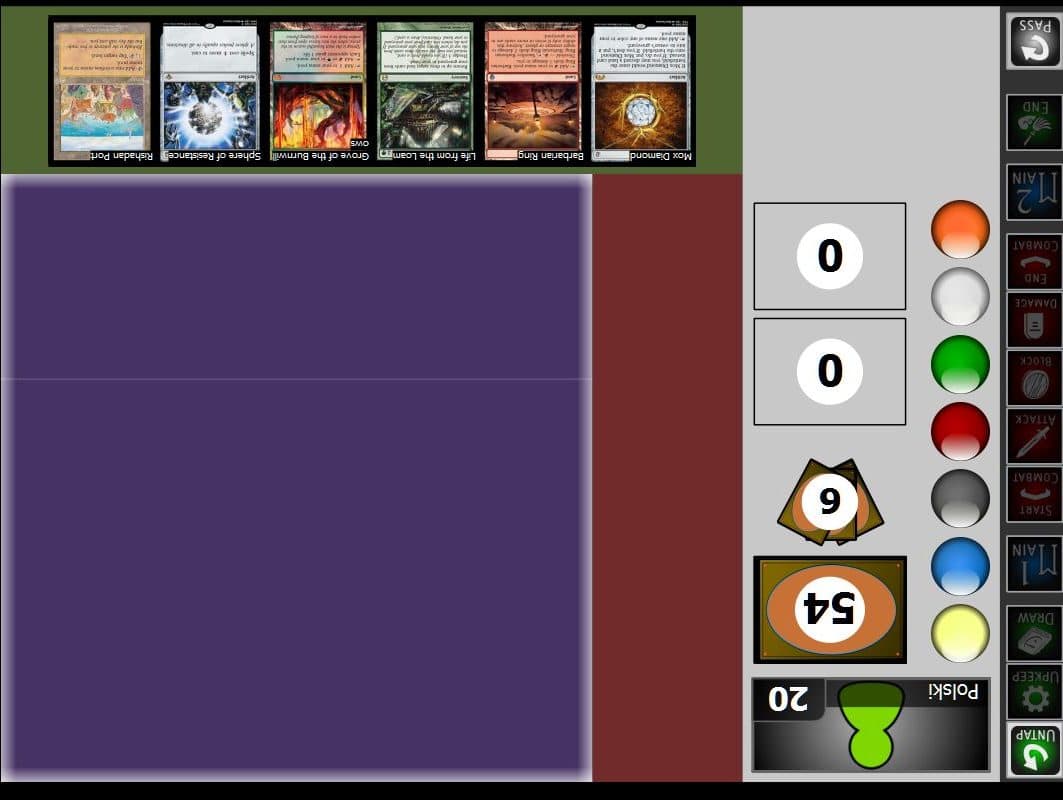 This hand could be a tough one to beat. A turn 1 Sphere of Resistance is never a good sign, but with a combination of his Life from the Loam engine and land disruption it can get tough. This entire article I preached about how bad Empty the Warrens it, but this may be one of these scenarios where we are pigeonholed into it. On turn 1 all we can do is Burning Wish for Empty the Warrens and make 10 goblins. This gives us a turn 3 kill, and 2 turns for them to find an answer. If we don’t go for it then we have to deal with all of their disruption which we have no way to beat or any cantrips to help us look for those cards, so I end up going for the goblins plan despite knowing how bad it is in this matchup, but I feel like if I don’t go for it then I don’t know what my game plan moving forward is since I can’t beat his hand with my current cards, and I will need a lot of help. Luckily it was good enough and I won the game and the match. 2-0. This was a good lesson on TES, and magic in general. Just because a strategy isn’t good in a particular matchup doesn’t mean that strategy can never be used. It may not be our go to strategy, but we have to keep all options open and keep it in our back pocket for the 1 out of every 20 games it comes up, and this was one of them.

I keep my opening 7 and cast a Cabal Therapy naming Sphere of Resistance and I miss. Here is the situation and my hand (now my turn 2). 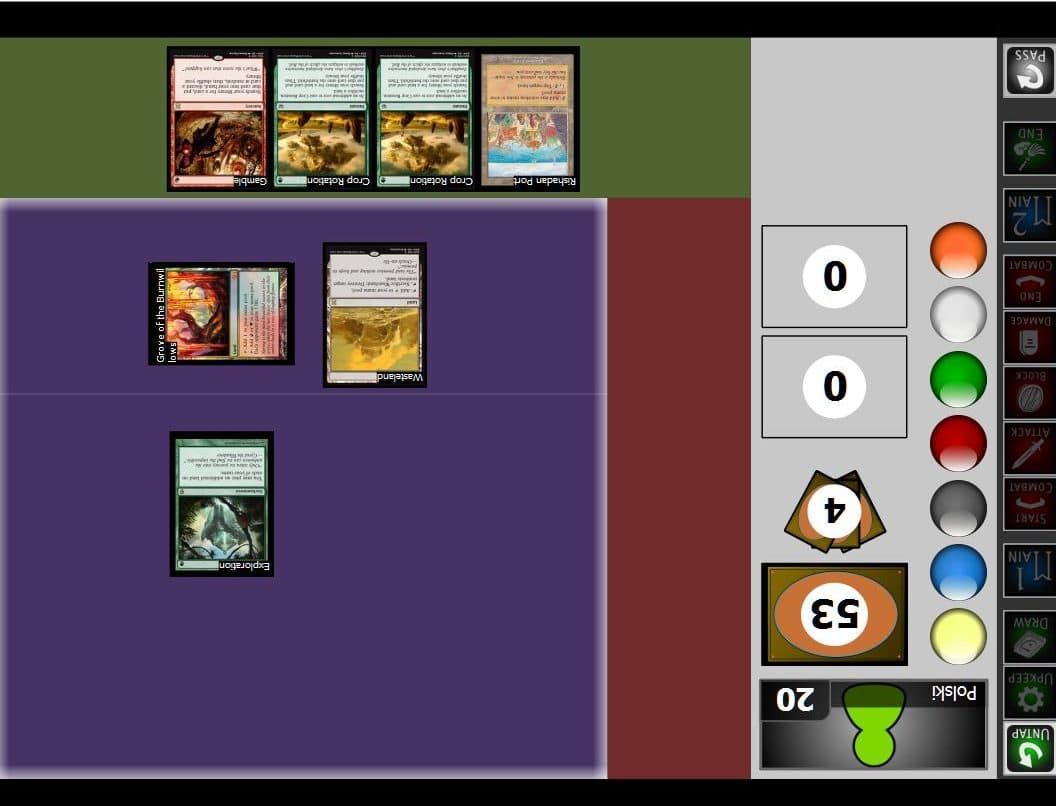 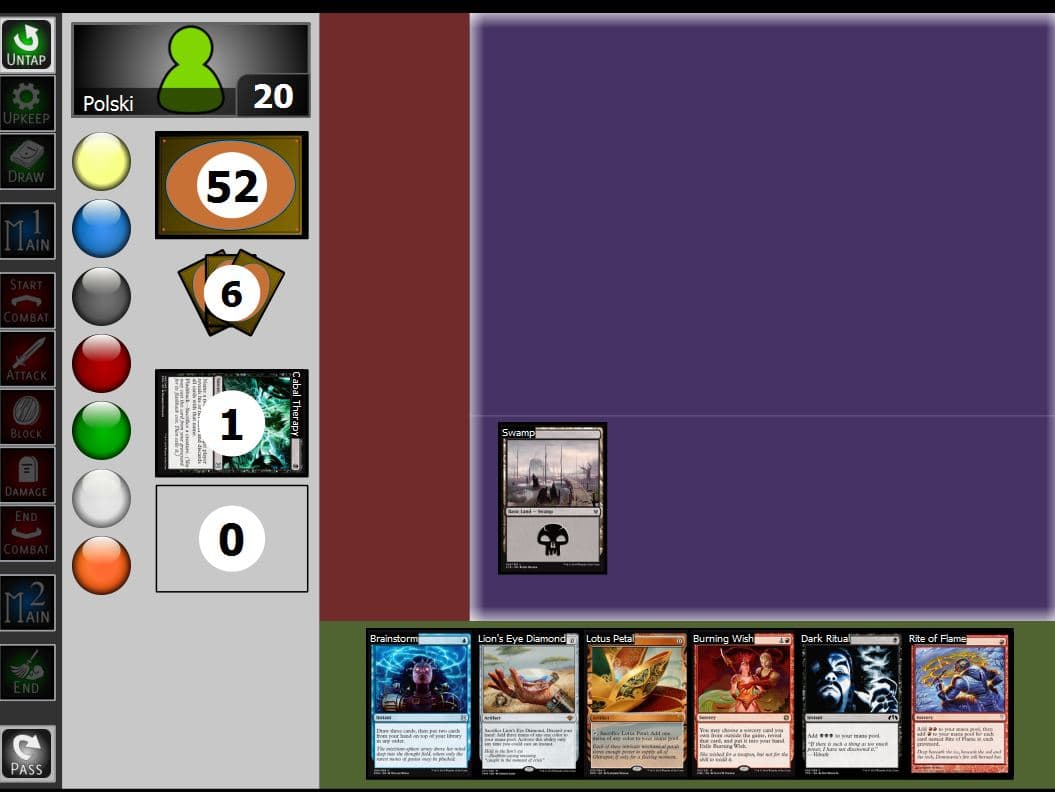 This is a game 3 scenario of a bonus match. Game 1 I won with a Burning Wish for Telemin Performance, and lost game 2 due to several lock pieces. This hand has the ability to Telemin Performance again and potentially kill the opponent, but should we go for it? They have already seen this line and a lot of lists play Tireless Tracker in their sideboard, so there is a good chance it could be in his deck now just to beat Telemin Performance, but maybe he didn’t bring it in or maybe it’s not even in his sideboard. Hard to tell, but if we don’t go for this line then what do we do? I will leave this scenario open so hopefully we can get a good discussion about it before I tell you what I did. If you want to take this scenario 1 step further pretend we won game 1 with Tendrils of Agony. Would the opponent have the knowledge to play around Telemin Performance despite him not seeing it? Let me know your thoughts!

Lands vs TES is a very interesting matchup because it’s often about playing these guessing games and playing around these tricks players can do with cards like Crop Rotation and Empty the Warrens being a very bad card, yet has won me some crucial games, or the Telemin Performance mind game post board. We didn’t see it in today’s examples, but there can often be this role evaluation mind game too. The opponent wants to use their Crop Rotation to nuke our graveyard, stop our horde of goblins, or mess with our lands, but they also want to be able to combo kill us early or we have the ability to recover, and at the same time the opponent can’t just sit on his Crop Rotation in hand because of our 7 discard spells. Makes for some very interesting decisions and I hope everyone learned something about this matchup. With all the Delver of Secrets and blue decks on Magic Online I could definitely see a rise in Lands’ popularity which means we will be running into it more often if my prediction is correct, so let’s make sure we are familiar with the matchup. Until next time, good luck stormtroopers!