Maverick is a green-white-based creature deck. The creatures are used to be disruptive, aggressive, and to combat the opponent’s strategy. Maverick plays many different creatures, so it plays four copies of [[Green Sun’s Zenith]] to help find the appropriate creature for any given situation. Maverick has been popular with every different color as a splash. We’ve seen red, blue, and black as splash colors for key spells. Recently, black has been popular for [[Plague Engineer]]. If you’ve been playing Legacy for a while, you’re probably familiar with playing against Maverick. With so many different variations of Maverick as well as the changes to TES, it’s important to know how these current versions matchup.

How does Maverick matchup against TES?

[[Green Sun’s Zenith]], [[Collector Ouphe]] – Without having a [[Thalia, Guardian of Thraben]], [[Green Sun’s Zenith]] and [[Collector Ouphe]] are the next best options. Over the past few years, TES has moved to being a heavier-based artifact deck. There are 18 artifacts in the main deck that has activated abilities. Not being able to activate any of them would make it extremely hard to win the game.

[[Plague Engineer]] – The presence of [[Plague Engineer]] in both the main deck and sideboard mean we cannot rely on [[Empty the Warrens]] in this matchup. Cutting off this angle of attack means Maverick doesn’t have to worry about any [[Goblin Token]]s.

[[Wasteland]] – This is the reason why we have a basic [[Swamp]] in our deck. It is important that we realize that they are a [[Wasteland]] deck immediately, so we know how to sequence our fetches properly to not get locked out. This is where our experience with TES really comes through because not every hand may have the luxury to get basic [[Swamp]]. We need to evaluate if we can afford to, or if we can just take the risk of them having [[Wasteland]], so we can cast all of our spells. One thing to note is if our opponent does use a [[Wasteland]] on an early turn then it will set them back a turn on casting [[Thalia, Guardian of Thraben]] or a [[Green Sun’s Zenith]]. Having access to both [[Mox Opal]] and [[Chrome Mox]] as constant sources of mana help from being locked out by [[Wasteland]].

From a Maverick perspective, they’re going to be looking to play some disruption by the second turn. They’re going to mulligan down to a [[Thalia, Guardian of Thraben]], [[Green Sun’s Zenith]], [[Collector Ouphe]], or a sideboard card. Knowing that means there’s two options. We either need to have a hand that plays under their disruption and try to win on the first turn, or keep a slower hand that has some way to interact with their permanents. The longer it takes to find an answer, the more likely it is that they will find a second piece of disruption. Our best chance of winning is on turn one or on turn 3-4 where we can answer their permanent and then win on the same turn. [[Empty the Warrens]] is not a reliable win condition with [[Stoneforge Mystic]] and [[Batterskull]] combined with a deck full of creatures. [[Echo of Eons]] is also fairly risky because if the new seven cards aren’t good enough to win that same turn, there’s a good chance the opponent will be able to untap and play some disruptive creature. Our best bet is with [[Ad Nauseam]] and [[Tendrils of Agony]] because we will have a high life total in the early turns and it’s the least risky option.

The opponent is a permanent based deck and will be trying to disrupt us this way. We need our answers to be good against this angle, so [[Abrupt Decay]] and [[Chain of Vapor]] handle that nicely. [[Defense Grid]] is an obvious cut because the opponent will not be interacting during our turn. [[Veil of Summer]] is the next worst card to cut. The opponent will have [[Abrupt Decay]] and [[Thoughtseize]] post-board, so there is some use for it, but not enough that we want four copies.

In this game, I was on the play and had a slower hand, but just needed a cheaper tutor or some fast mana to make this hand a little better. I had an [[Echo of Eons]], but no way to put it in the graveyard. I’d be relying on drawing that or casting it for its mana cost. I didn’t cast anything the first two turns of the game, but just relied on the draw step to get me there. On my opponent’s second turn, they cast [[Stoneforge Mystic]] and tutored for [[Batterskull]]. This was good news for me because it meant no [[Thalia, Guardian of Thraben]], but there could still be a [[Green Sun’s Zenith]] on their third turn. On my third turn, I had the ability to play my third land, which was my second blue source for [[Echo of Eons]]. I would be able to cast the [[Echo of Eons]] with one black mana floating from [[Dark Ritual]] under the [[Chrome Mox]], but if I couldn’t win off the new seven-card hand, my opponent would have a high probability of drawing a disruptive creature to play on their turn. I decided to go for that because if my opponent did have something to play on their third turn anyways then I think this gives me the best opportunity to win. 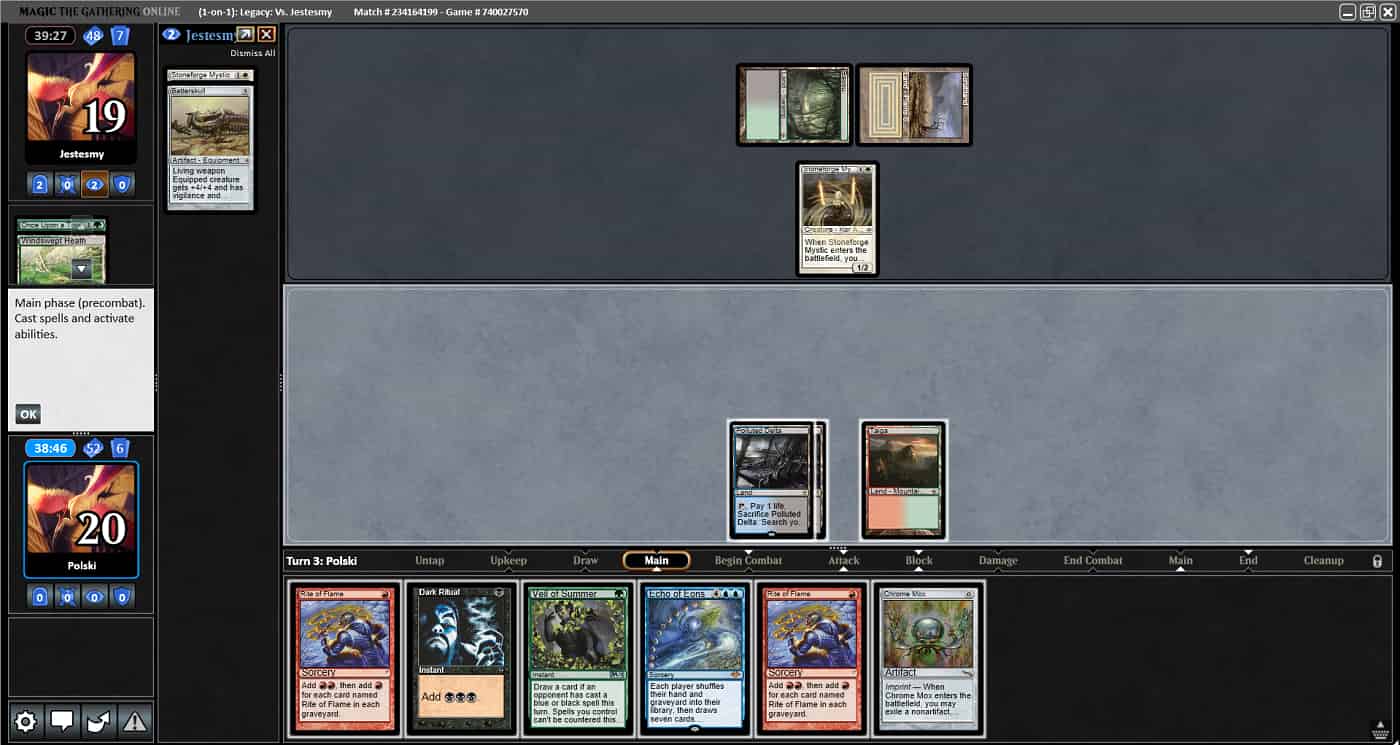 The seven cards were pretty good, but just a little short of winning this turn. I decided to keep trying and used both of my cantrips that I had drawn to either find something to win this turn or set up to win on the following turn if my opponent didn’t draw anything. 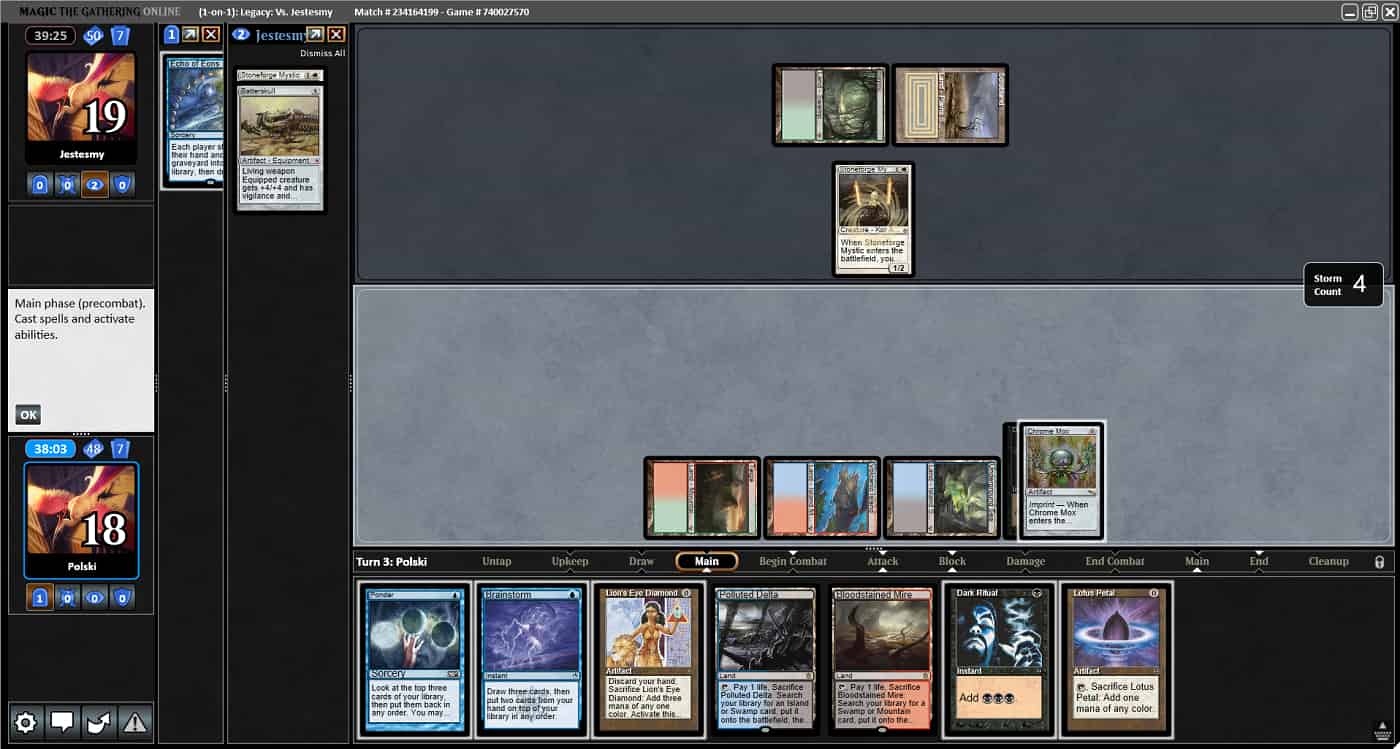 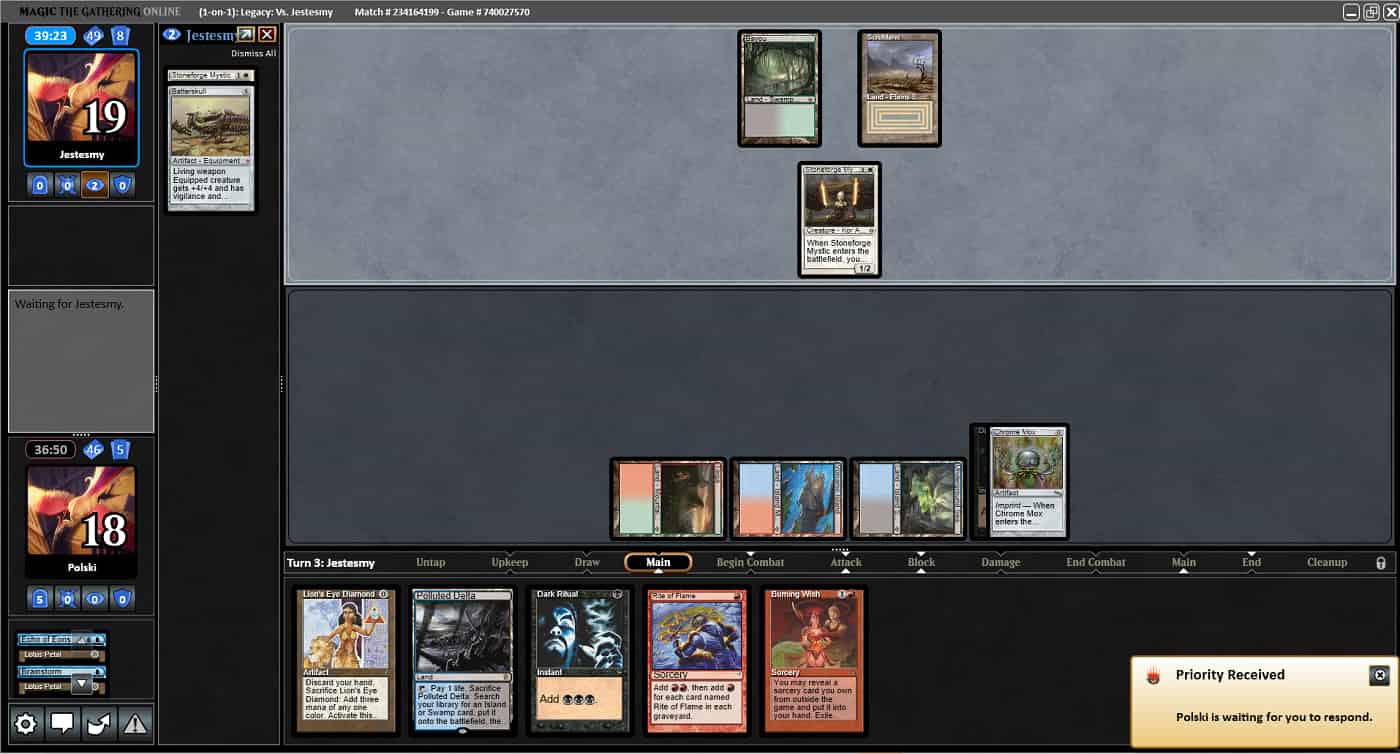 Unfortunately, they did and played a [[Thalia, Guardian of Thraben]]. On my second turn, I used the [[Burning Wish]] to get [[Grapeshot]] in order to remove it, but on their fourth turn they had the [[Green Sun’s Zenith]] for [[Collector Ouphe]]. On my fourth turn, I drew [[Brainstorm]] and immediately cast it. This would give me enough Storm, with [[Dark Ritual]], to [[Grapeshot]] for three and kill both of their disruptive creatures. Once again, I’d have to hope for them not casting anything good on their next turn. 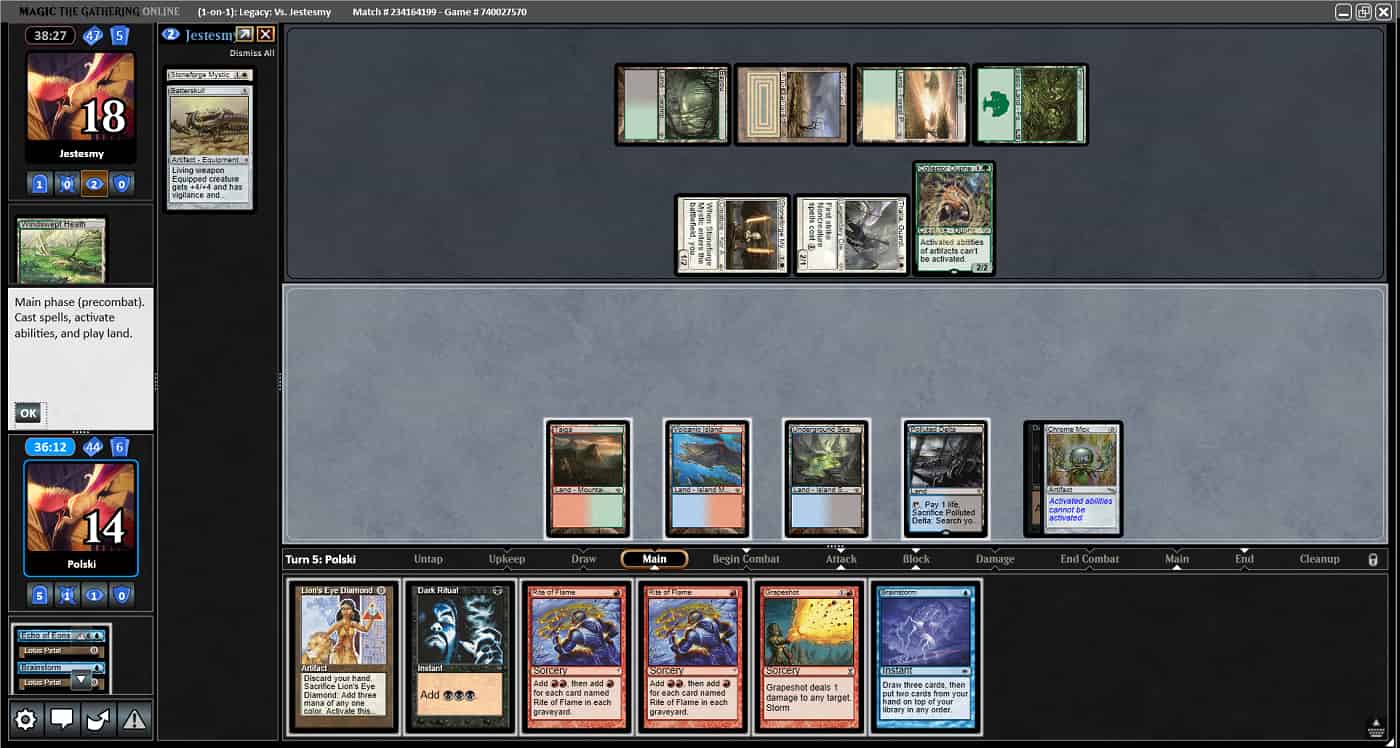 The opponent then played a second copy of [[Stoneforge Mystic]] to search for [[Batterskull]] once again, after it had been shuffled back into their deck from [[Echo of Eons]]. They then used the first copy to put [[Batterskull]] into play. 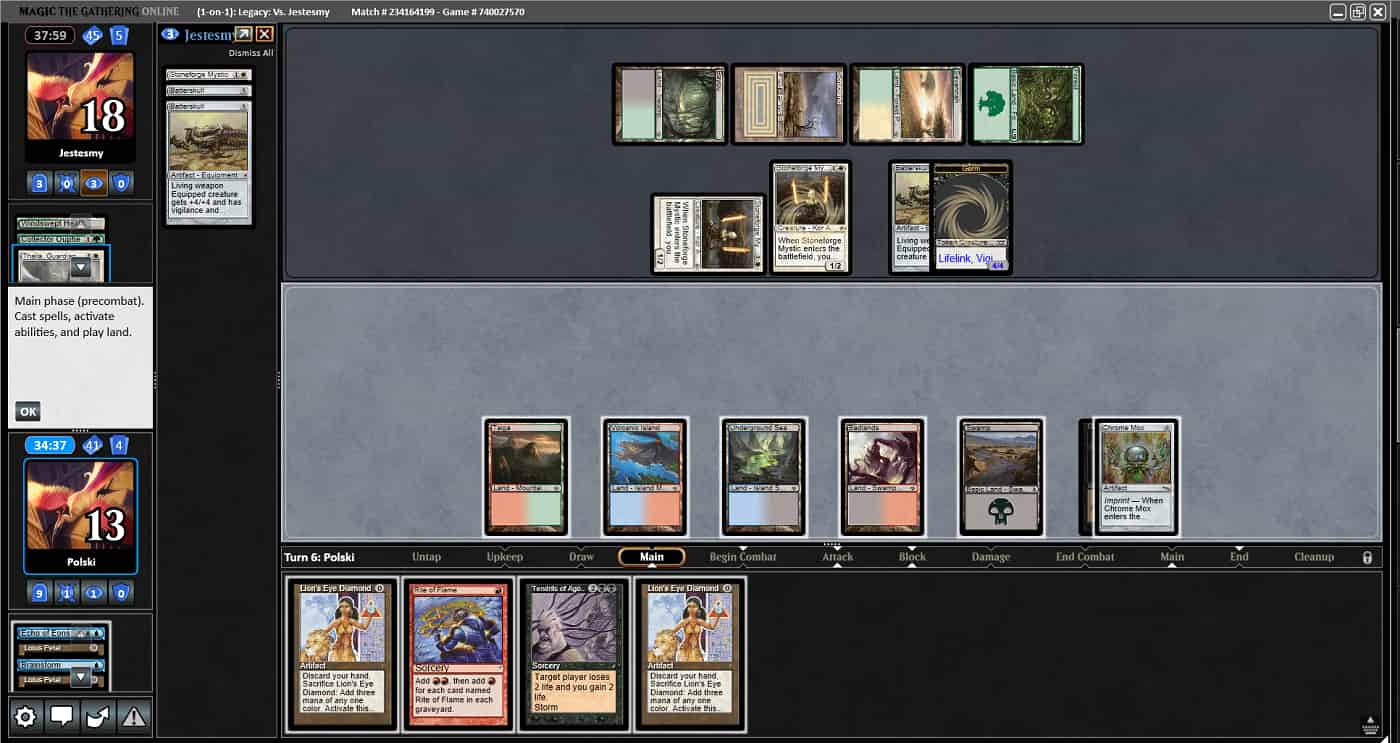 After a couple of turns of me not doing much and my opponent destroying my [[Chrome Mox]] with an [[Abrupt Decay]], I finally drew a way to combo off in [[Wishclaw Talisman]]. This would allow me to cast [[Ad Nauseam]], but I only had seven life to work with. I didn’t see another route to victory here, so I decided to go for it. 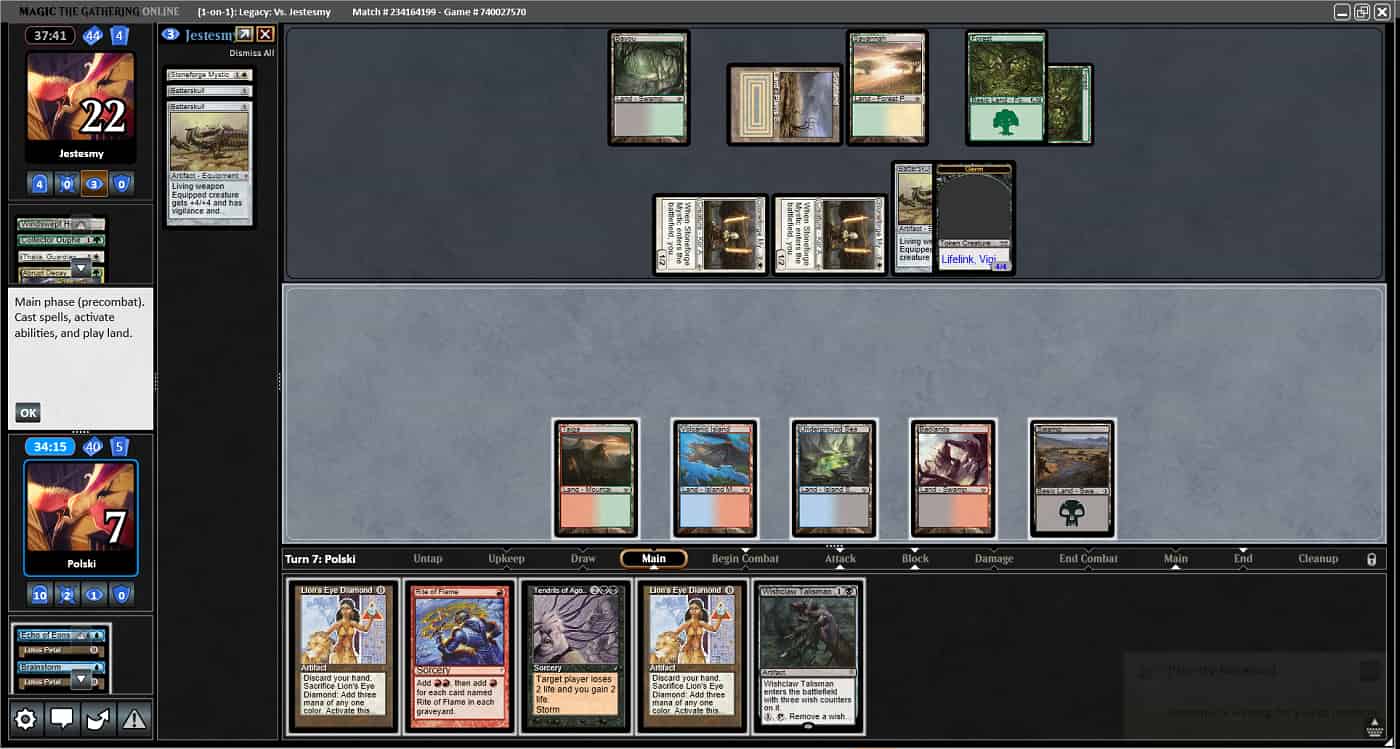 I got really lucky, but the top of my deck was all cheap mana and a tutor. That is perfect to get me both the mana and the storm needed to win from here. I had access to seven mana which was perfect for [[Ponder]], [[Burning Wish]], and [[Tendrils of Agony]], and the exact amount of Storm needed for 22 damage! 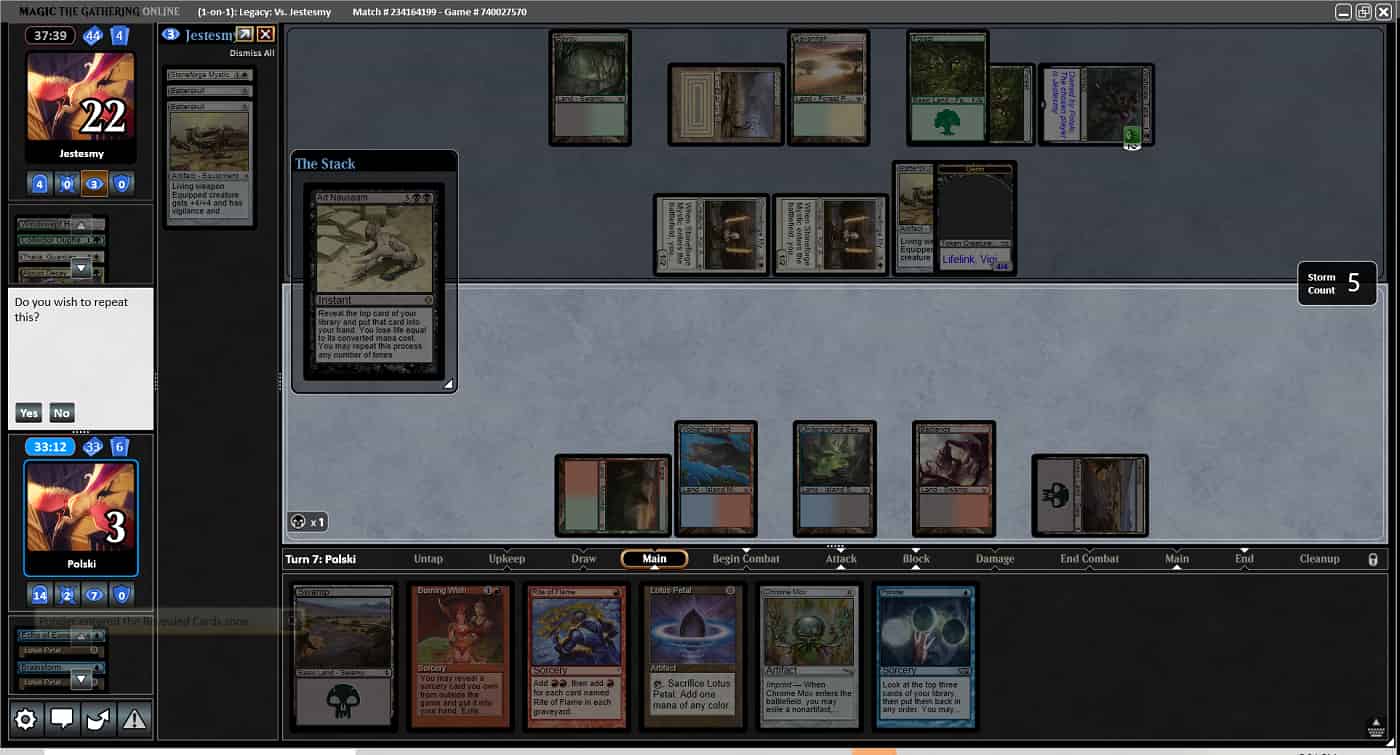 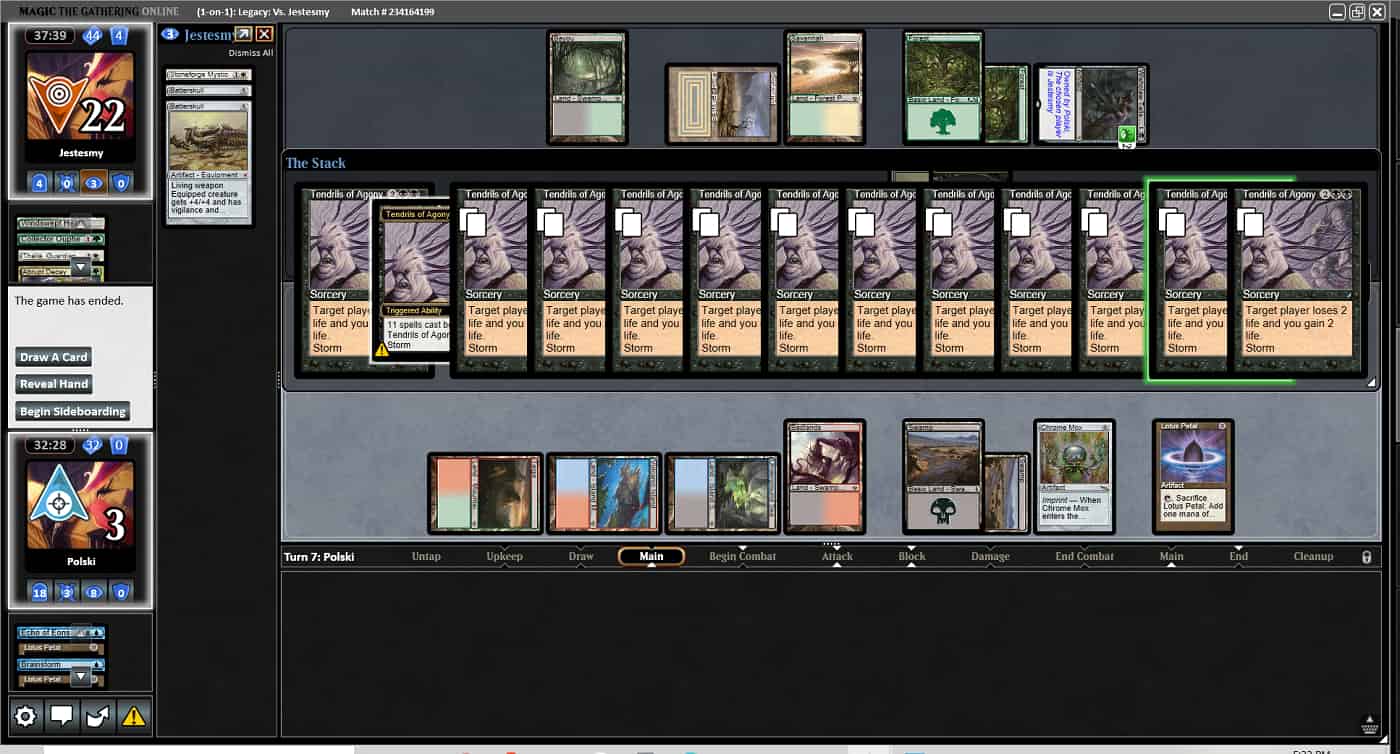 This was a great game! It showed how a combo deck and a fair creature deck can have a back and forth game. With all of the new cards and decks being added to Legacy, it’s exciting to see how decks evolve. While Maverick isn’t at the top of decks changing the most, it has gotten some new cards. Because of this, it’s important we keep practicing and understanding this matchup. I hope you enjoyed this article, and I wish you the best of luck in your own testing!