Maverick is a green white based deck that combines elements of aggression while being able to attack the opponent’s strategy. The draw to this deck is the flexibility in the deck list, being able to play cards like Green Sun’s Zenith along with silver bullets. This allows Maverick to have cards for most situations faced in legacy, and play the type of game plan they need to win a particular matchup. The main goal when playing Maverick is to cover the expected metagame with silver bullets while not destabilizing the core of the deck, and to have the capability of changing the strategy for different opponents. This means that Maverick will definitely have a game plan for when they play against storm based decks, and we need to have a plan as well. Maverick is a deck that was very popular, and one of the better decks in legacy for a while when Green Sun’s Zenith was printed in 2011. It was a tier 1 deck for a couple of years and preyed on Delver of Secrets strategies, but since then many cards were printed making this deck fall out of favor the last few years. Recently, however, people have been picking the deck back up, and having fairly good results last month with 3 in the top 16 of SCG Legacy Classic Atlanta, 1 in the top 16 of SCG Team Open Baltimore, and 1 in the top 8 of Grand Prix Seattle. This really surprised me, so I figured I better reevaluate our matchup.

How does Maverick matchup against TES?

Green Sun’s Zenith, Gaddock Teeg – This is what allows them to tutor for many of their silver bullets, but the only one we really care about is Gaddock Teeg. Being able to play “5 copies” of Gaddock Teeg is what makes this such a threat for us and something we need to be cautious of. Gaddock Teeg shutting off 2 out of 3 of our win conditions, Empty the Warrens and Tendrils of Agony, but still leaves Grapeshot. We would either need to answer the Gaddock Teeg with a bounce spell or just use Grapeshot. It’s not a lock, but certainly makes the game harder to win.

Thalia, Guardian of Thraben, Ethersworn Canonist – These are the cards that make turn two a critical turn. These cards will require an answer as it is very unlikely to win with one of these in play. Thankfully we have Cabal Therapy and plenty of answers if they were to resolve, but once resolved it will more than likely slow us down by a turn or two as we try and answer them. The raw speed of TES and not having to worry about counterspells means we can be explosive and try to combo off before these cards can be cast. We have several different angles to beat cards like these.

Wasteland – This is the reason why we have 2 basic lands in our deck and it is important that we realize that they are a Wasteland deck immediately, so we know how to sequence our fetches properly to not get locked out. This is where our experience with TES really comes through because not every hand may have the luxury to get basic Island or Swamp. We need to evaluate if we can afford to, or if we can just take the risk of them having Wasteland, so we can cast all of our spells. Another note is if our opponent does use a Wasteland then it will set them back a turn on casting Thalia, Guardian of Thraben or a Green Sun’s Zenith.

Zealous Persecution – Most lists now a days do play some kind of sweeper or an answer to Empty the Warrens, but occasionally they don’t, but if they do it’s usually Zealous Persecution, because it also deals with True-Name Nemesis. The threat of this makes cards like Empty the Warrens a liability, and there’s no real tell if our opponent could have something like this or not, but I always keep it in the back of my mind. The good news is they usually only play a couple of copies. They aren’t loaded up on 4 of them, so there’s still a good chance Empty the Warrens can win games.

Playing against Maverick is very similar to playing against a lot of other permanent based decks, just instead of cards like Chalice of the Void or Trinisphere we have to worry about Thalia, Guardian of Thraben and Gaddock Teeg. We need to focus heavily on speed, and we will need access to bounce spells in case we have a slower hand or are on the draw we need to answer one of their threats before proceeding. This makes the key turns of the game to be turns 2 and 3. There is nothing the opponent can do on the first turn of the game that is impactful other than Wasteland. We also don’t mind trying to setup for a 2nd turn kill because of this. We are not forced to have a turn 1 combo, and if we are on the draw then we will also have access to our bounce spells (post board), or a chance that the opponent doesn’t have a disruptive creature. The main difference between Maverick and decks that play Chalice of the Void or Sphere of Resistance is that those cards can often come down turn 1 thanks to Ancient Tomb or other mana accelerants, but Maverick doesn’t have those. That means our first turn of the game is always free reign for us, so our cantrips are a lot better in this matchup if we have a slower hand to try and help us sculpt for a kill on the following turn.

This is a matchup that is all about speed, and trying to win before their hatebears can be cast. On the draw Ponder is the exact opposite of this strategy because you don’t have a ton of time to spend casting cantrips. We need to be casting cards like Cabal Therapy to name Thalia, Guardian of Thraben or Green Sun’s Zenith and then trying to win the following turn. On the play Ponder is a little more acceptable because they have no great disruptive card that they can cast on the first turn, and can help us setup for a second turn kill. Duress does hit cards like Green Sun’s Zenith, but ultimately they are a creature based deck and can often be a miserable card against a majority of their hands, so I replace them with bounce spells since they are a catch all. Bringing in the additional copy of Chrome Mox is perfect because it goes right along with our game plan of focusing on speed.

I lose the die roll, so I am on the draw and went second. I went into this match not knowing I’m playing against Maverick. On my first turn my opponent just played a land and passed and I cast a Ponder choosing not to shuffle. On my second turn after my draw step I only know the top card of my library, Cabal Therapy. 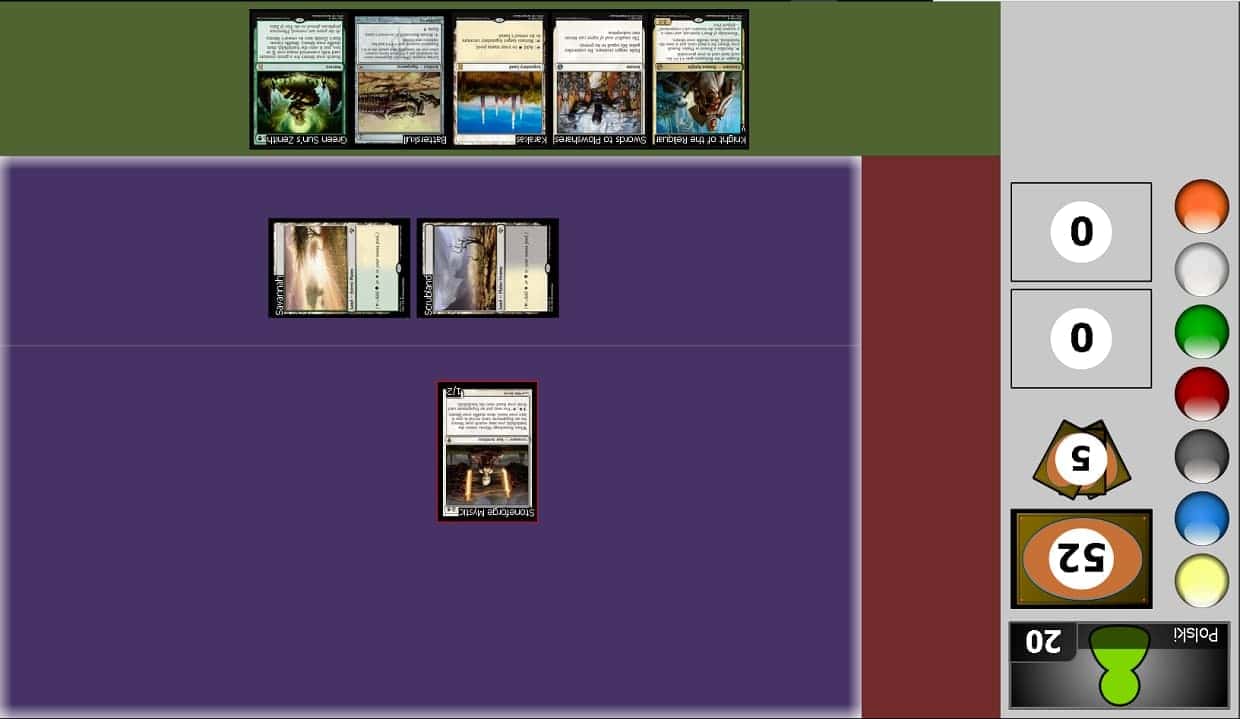 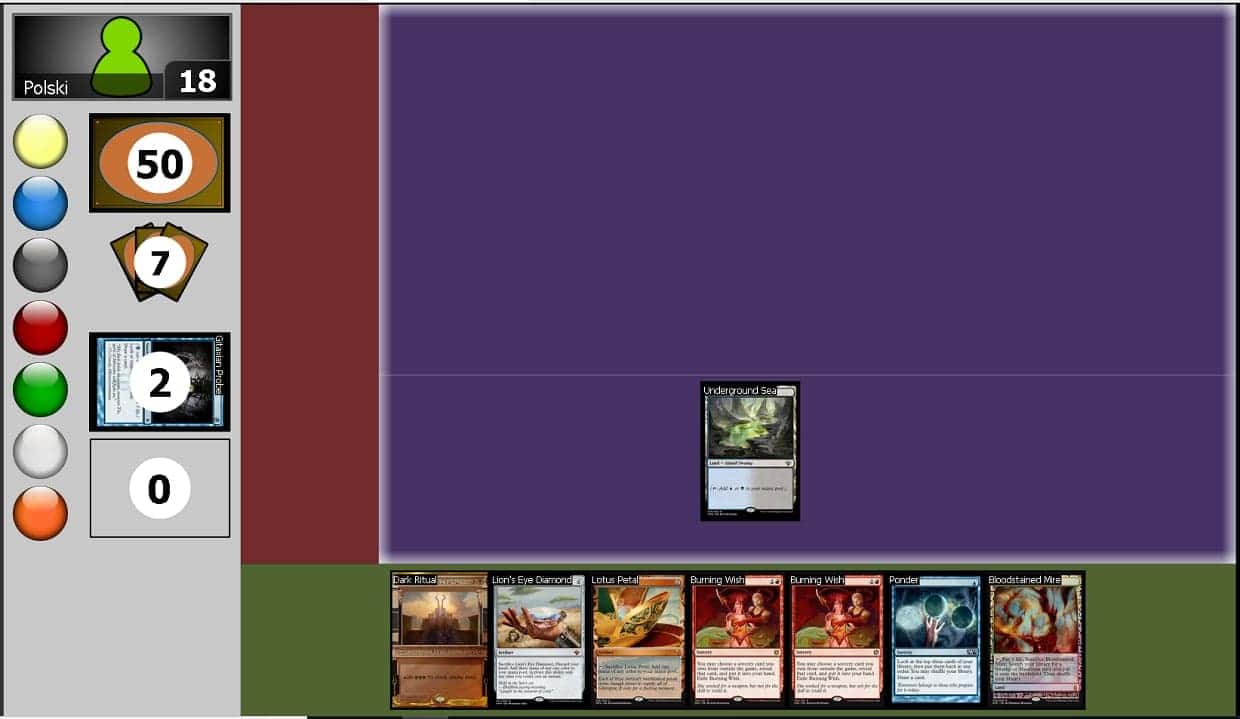 So, let’s evaluate here. If the opponent gets to untap they have the ability to Green Sun’s Zenith for 2, which can get Gaddock Teeg. They can also put a Batterskull into play making it quite difficult to win with Empty the Warrens. This tells me we either need a discard spell or to try and win this turn. Luckily, we have access to 8 mana and a discard spell on top of our library. We do not have enough mana to be able to Ad Nauseam here. With the Ponder in our hand we could see a few different options. There is a possibility of finding more mana, or we could simply grab the discard spell and move from there. That’s exactly how I start casting the Ponder off the Underground Sea and seeing the Cabal Therapy I knew about and 2 copies of Brainstorm. I keep and draw the Cabal Therapy. Now I have 2 options.

I went with option 2 because of the reasons stated, taking the Knight of the Reliquary and they just conceded after taking their draw step, signaling to me there was probably no wrath effect in their deck.

I sideboard exactly as stated above as I prepare for the second game. My opponent takes the play and here is the situation a little bit into the game. 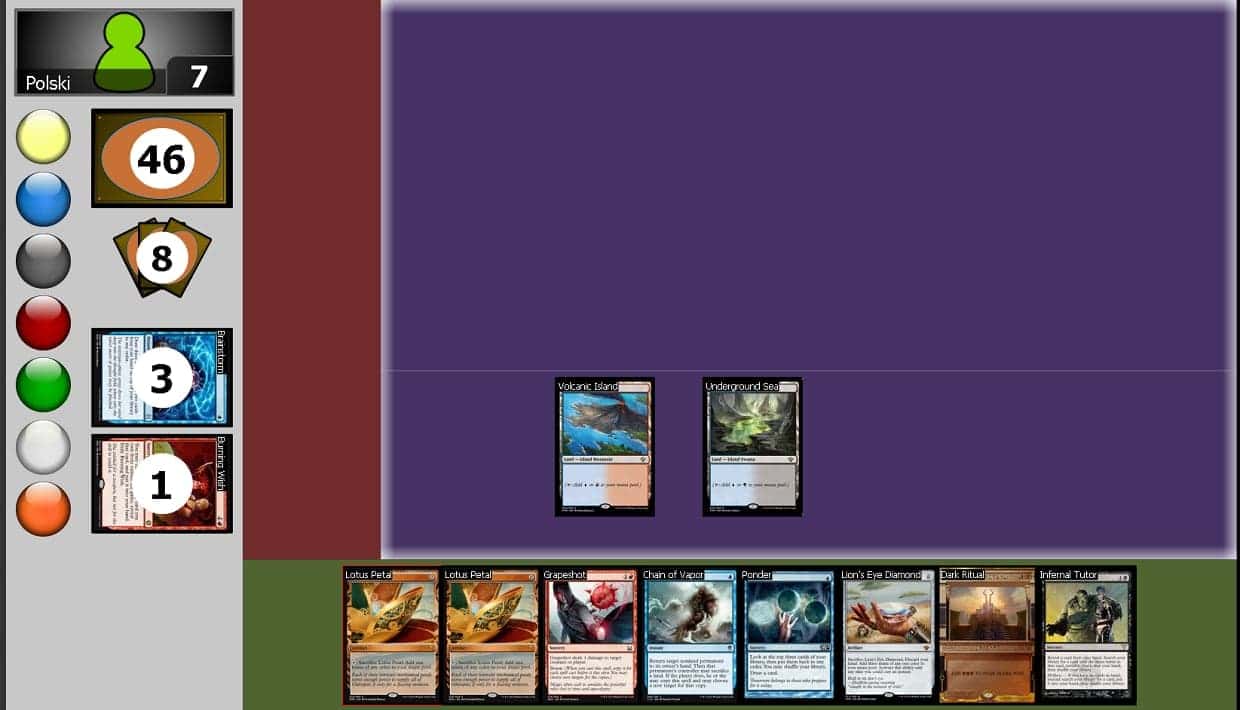 The Mother of Runes had just came into play, so it is summoning sick, and he was sacrificing his fetch land mid screenshot, but he didn’t cast anything.

I am under the gun here and had to Burning Wish for Grapeshot to either answer the Gaddock Teeg or try kill him with it since I did not have the bounce spell at that time. In this scenario I have exact amount of mana to bounce his Gaddock Teeg and then try to Ad Nauseam with 1 mana floating, but I am also at a pretty low life total here, so the question is is this worth it?

My answer would be yes. I do not see a scenario where we try to bounce the Knight of the Reliquary to get another turn because his Mother of Runes would be active and who knows what kind of top deck he could get. We can also bounce the Knight of the Reliquary then Grapeshot his Gaddock Teeg and pass the turn, but I am still concerned about the top of his library. I imagine his hand is pretty bad here since if it was anything good then he would have cast it last turn, so I would just go for it here by bouncing his Gaddock Teeg and hoping for some low cost reveals, and I would do it with R floating.

Do you agree or disagree with my decision here? I think there are several ways to approach this hand, and you could also cast Empty the Warrens here for a bunch, but my concern there is he has several cards in hand and not casting them, so what could they be? I think I’d rather take my risk and trust my deck with Ad Nauseam, but maybe you think the odds are better that they don’t have a wrath effect.

Let me know what you would have done here, and maybe there’s even a line I’m missing that’s better. I hope we can have a discussion on the last scenario and as always I learn from the community just as much as the readers, but until the next one let’s keep the conversation going.