Mono-Green Cloudpost is a ramp deck that takes advantage of [[Cloudpost]], [[Glimmerpost]], and [[Vesuva]] to produce large amounts of mana to cast Eldrazi creatures and [[Primeval Titan]]. The deck plays cards like [[Expedition Map]] and [[Crop Rotation]] to find the key lands. With the recent printing of [[Elvish Reclaimer]], the deck has yet another card to search for lands. We’ve seen an increase in Mono-Green Cloudpost’s popularity, so we need to understand this matchup to be better prepared.

How does Mono-Green Cloudpost matchup against TES?

[[Crop Rotation]], [[Elvish Reclaimer]] – Both are important cards in the Mono-Green Cloudpost deck because it allows them to find specific lands that they need at instant speed. Against TES, that means finding [[Bojuka Bog]] to exile [[Echo of Eons]] or copies of [[Rite of Flame]] if we give the opponent priority.

[[Pithing Needle]] – Being able to name [[Wishclaw Talisman]] is a big deal. We play four copies, so many of our hands rely on it. If we have to find another avenue to win, it could slow us down just enough to allow the opponent to win before we can.

Mono-Green Cloudpost is a slower deck. This gives us the time we need to combo off safely in the earlier turns since they have little interaction and can’t win quickly. Our best plan to win is to try to combo off during the first three or four turns. The range of opening hands is much wider against Mono-Green Cloudpost because we aren’t looking for specific cards or the perfect ratio of combo and protection. We just need a reasonable hand that can combo off before they assemble their game plan. In the post-board games when they have access to [[Mindbreak Trap]] and [[Force of Vigor]], we may need to play more cautiously. We only have two copies of [[Defense Grid]] to protect us from a [[Mindbreak Trap]], so waiting to find a [[Defense Grid]] isn’t always reliable. You will have to evaluate the specific situation to determine if it’s worth risking to combo or waiting until you have a [[Defense Grid]]. [[Force of Vigor]] is more manageable as we just can’t play out our artifacts too early unless we are using them to combo off or don’t mind them being destroyed. Ultimately, this is a favorable matchup for us. We just need to have discipline when evaluating our opening hands.

[[Veil of Summer]] is removed because the opponent is not trying to interact in a way that [[Veil of Summer]] counters. Mono-Green Cloudpost is a permanent-based deck, so we want our cards to be able to interact with permanents. That makes [[Chain of Vapor]] and [[Abrupt Decay]] easy additions. It’s a good idea to leave [[Defense Grid]] in the deck because the opponent will be bringing in [[Mindbreak Trap]].

I was on the play and had to mulligan down to six cards, but my opening hand was pretty good. I had plenty of mana, [[Burning Wish]], [[Brainstorm]], and a [[Defense Grid]]. On the first two turns of the game, my opponent played a [[Pithing Needle]] and named [[Wishclaw Talisman]]. I then played out the [[Defense Grid]]. 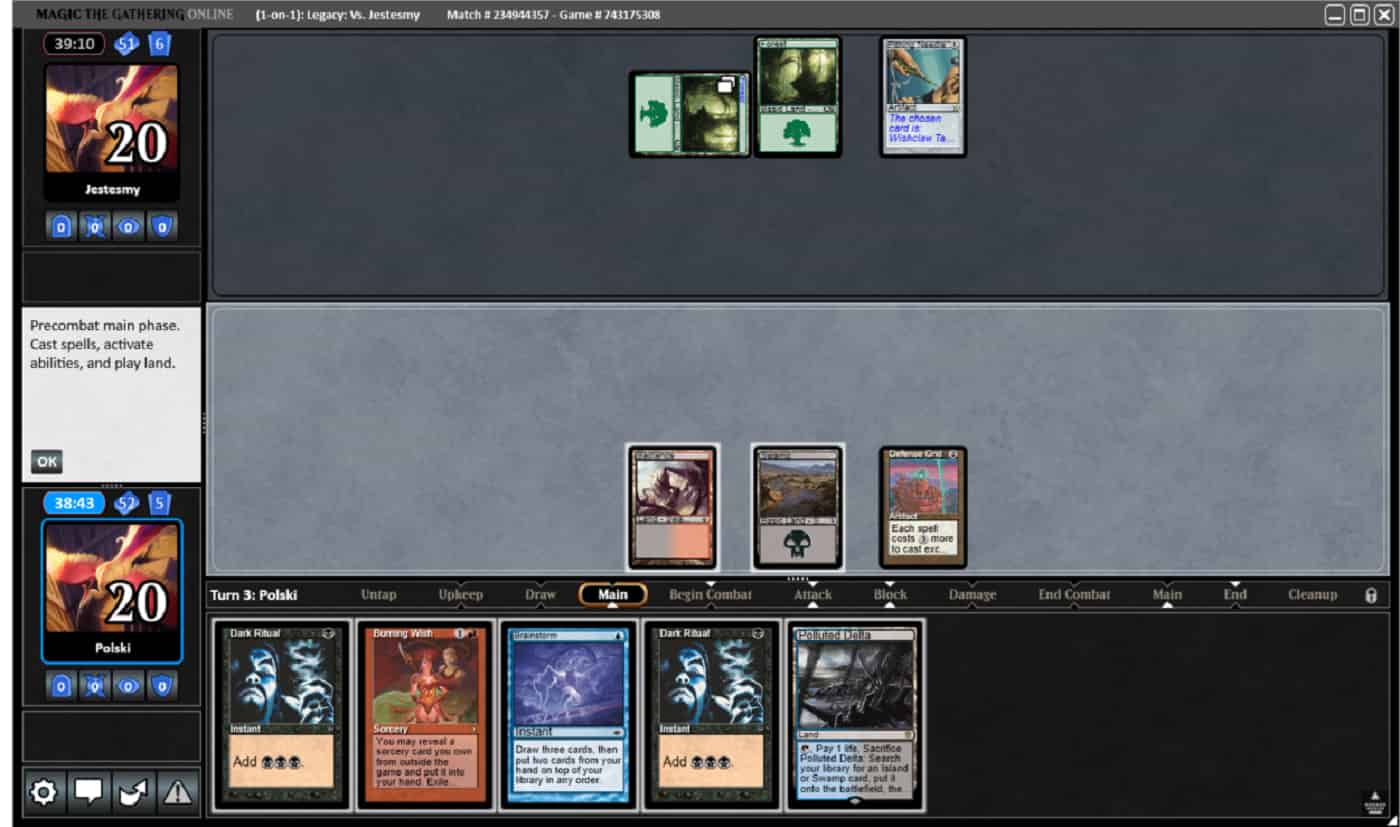 On my third turn, I had the ability to cast both copies of [[Dark Ritual]] and [[Burning Wish]] for [[Empty the Warrens]] for eight goblins, but I didn’t think that would be enough. I could either wait a turn to use the [[Brainstorm]] and try to combo the next turn or on the current turn, and I ultimately decided to just cast it. 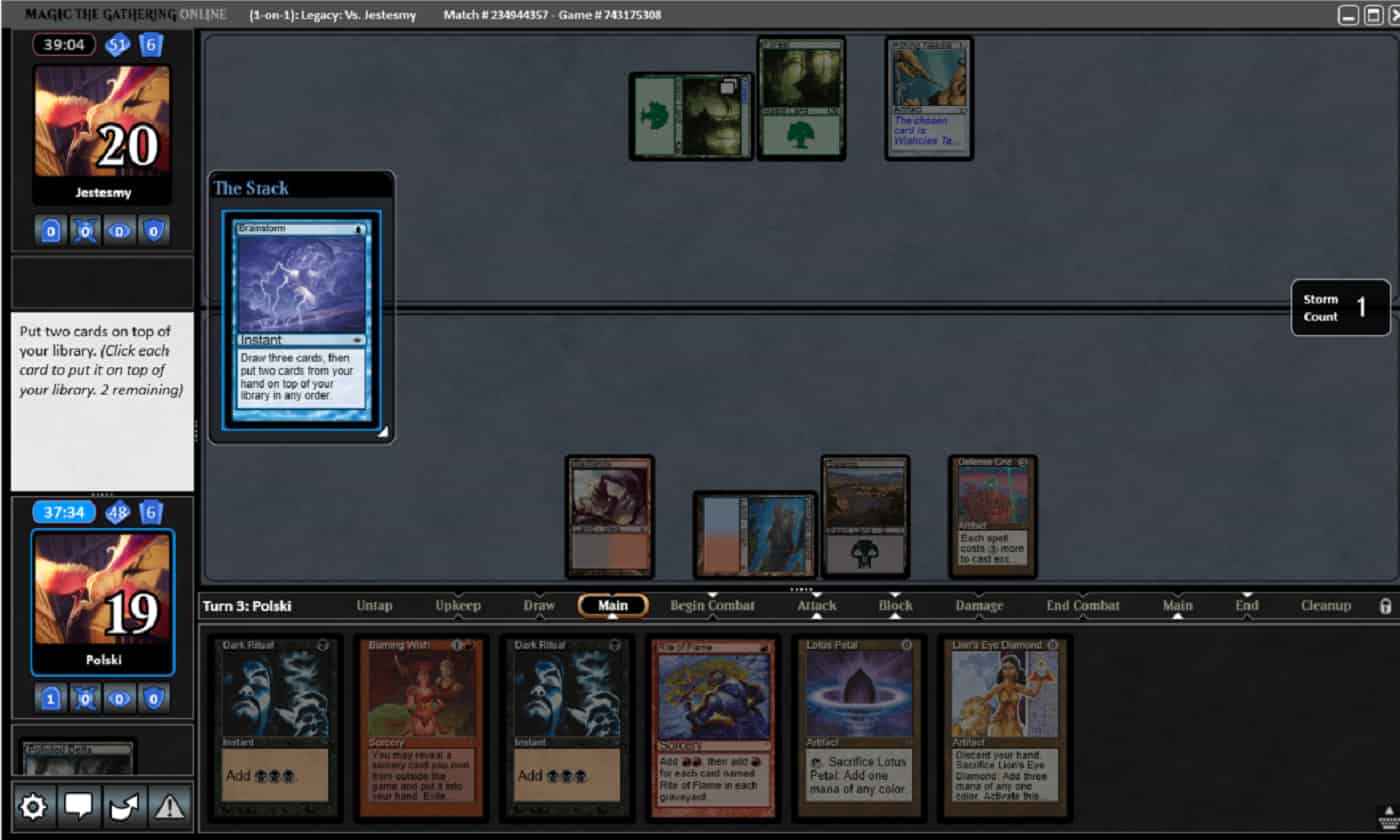 The three cards drawn were really good! The [[Lion’s Eye Diamond]] was the exact amount of mana needed to cast [[Burning Wish]] and [[Peer into the Abyss]], so I put back the [[Rite of Flame]] and [[Lotus Petal]]. 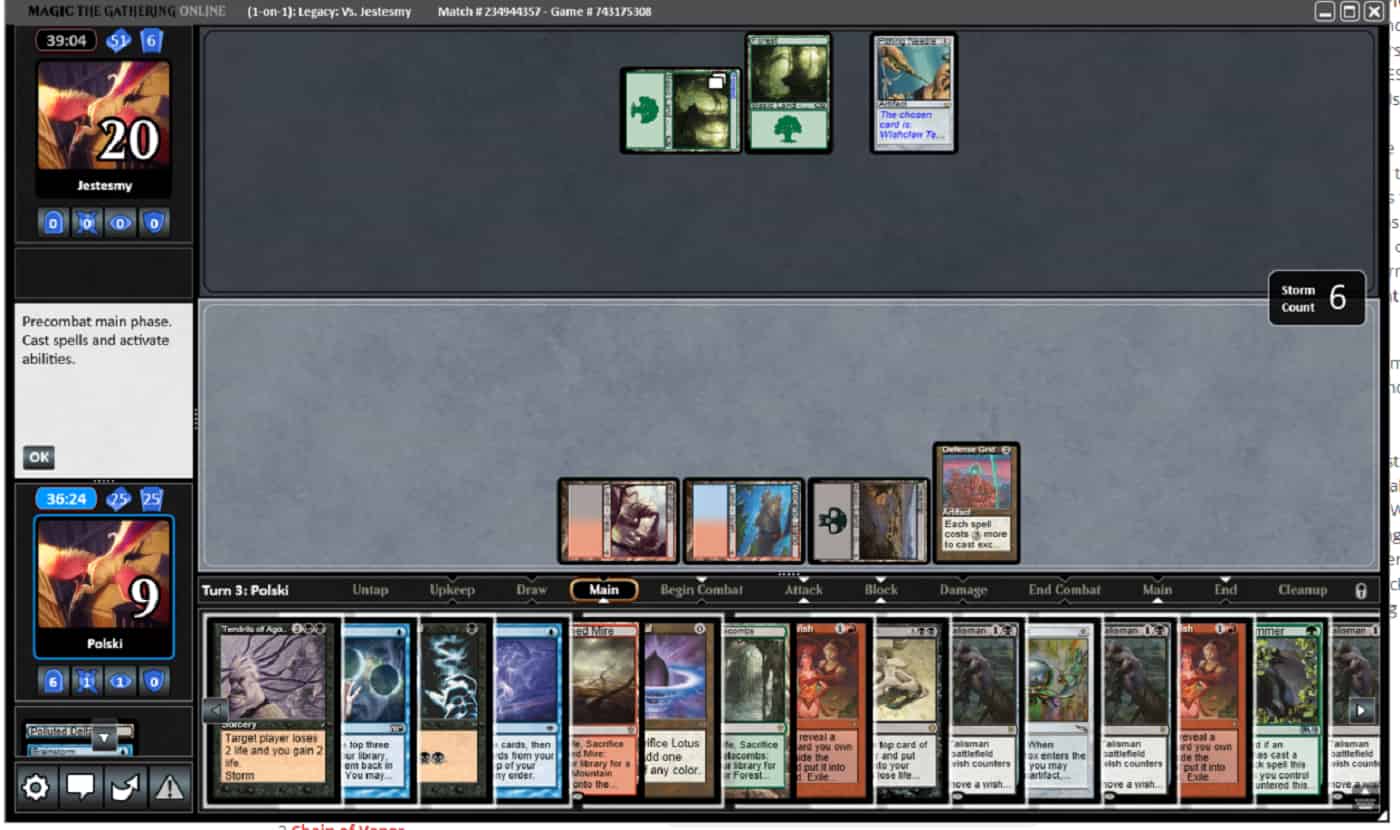 As [[Peer into the Abyss]] usually does, it provided more than enough resources to win the game with [[Tendrils of Agony]]. 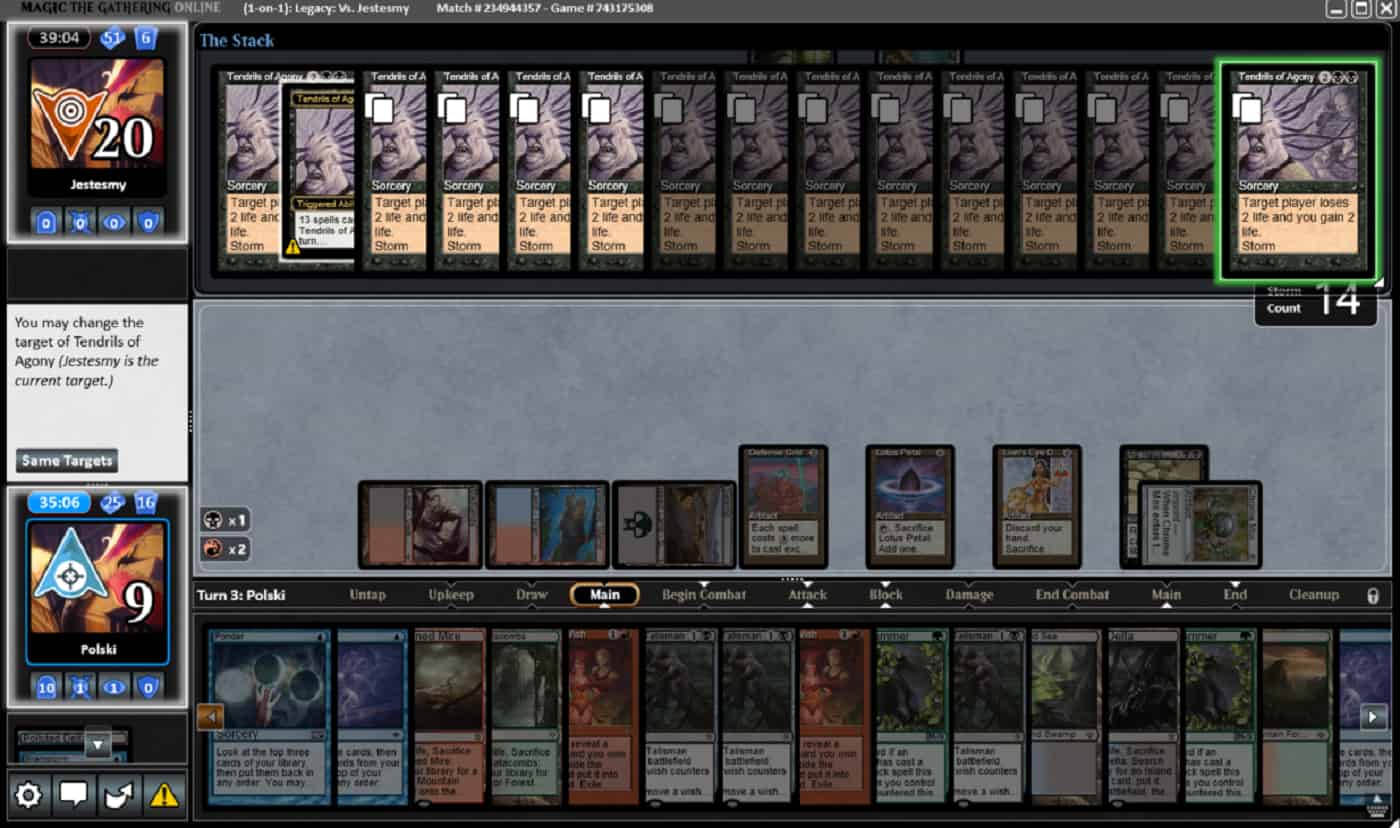 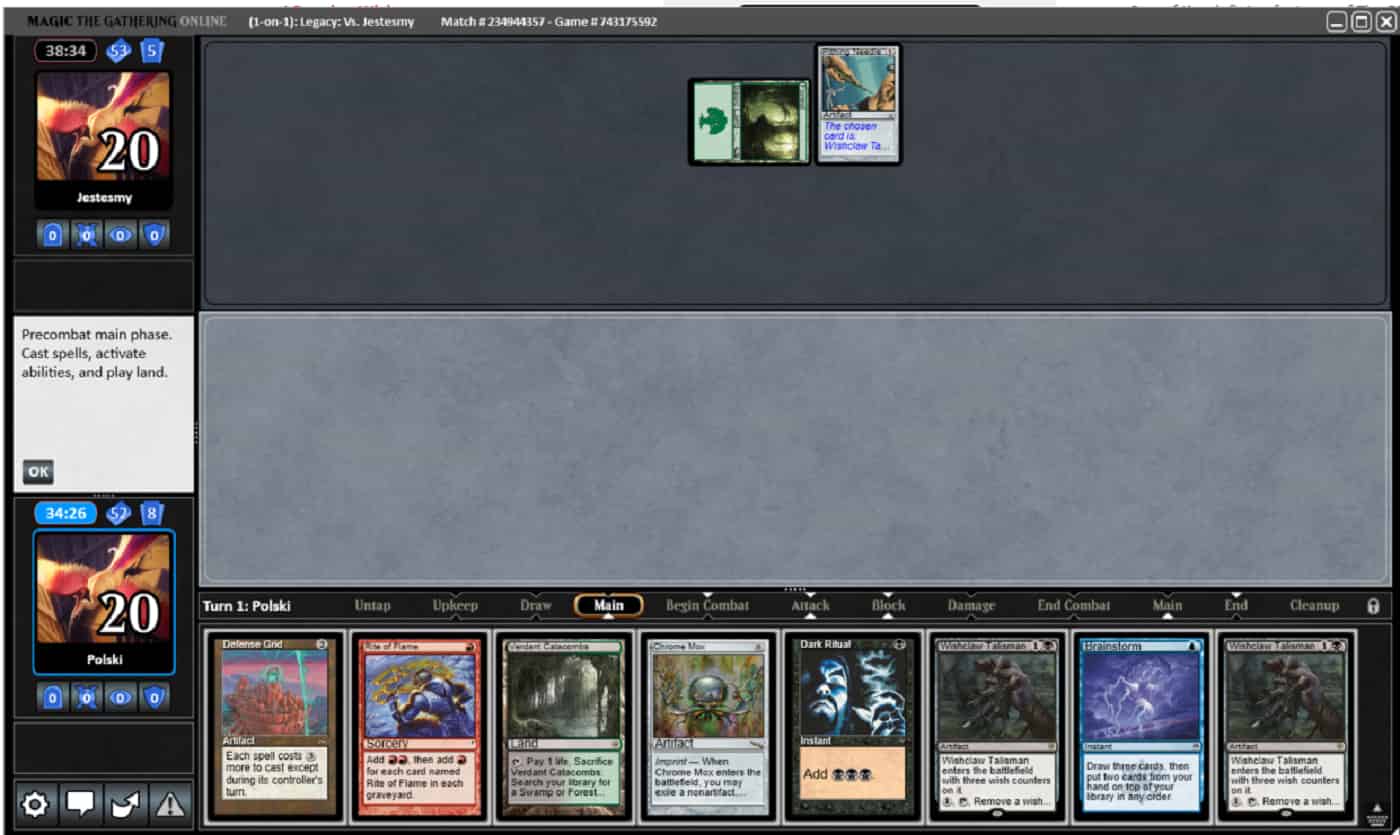 My opponent just played a [[Cloudpost]] on their second turn. On my second turn I cast a [[Brainstorm]] looking for an answer to the [[Pithing Needle]] or a fetchland to shuffle them away. I found both an [[Abrupt Decay]] and the fetchalnd I was looking for, so I decided to put back and shuffle one [[Abrupt Decay]] and one [[Wishclaw Talisman]]. I then played the [[Chrome Mox]], imprinting a [[Rite of Flame]], and cast [[Defense Grid]]. This would protect me during my turn from a [[Mindbreak Trap]]. 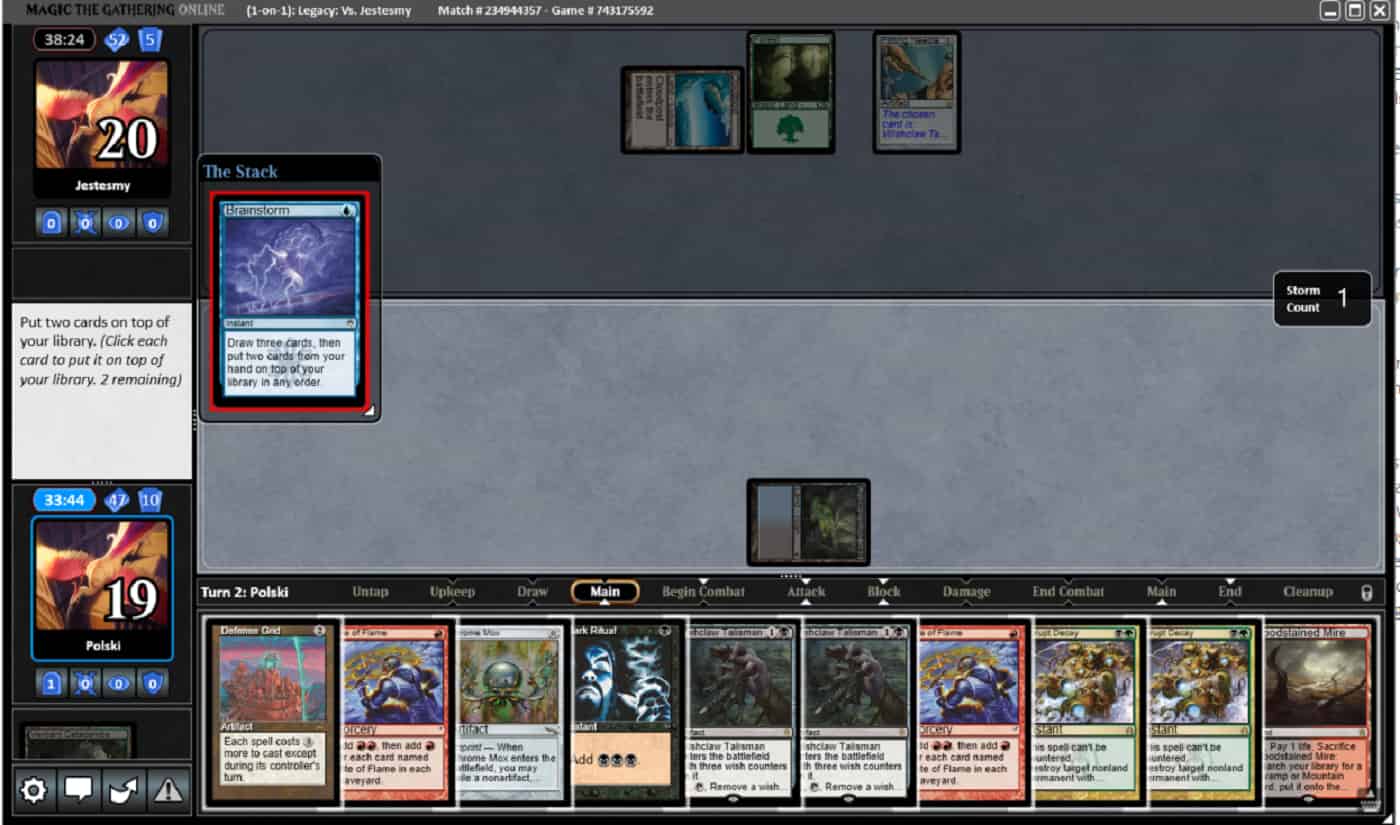 My opponent played a [[Sylvan Library]] and another [[Cloudpost]] on their third turn. I knew they were setting up to have a big turn four, so I would need to do something on my next turn. On my third turn I played out the [[Wishclaw Talisman]]. My plan was to cast [[Abrupt Decay]] on their [[Pithing Needle]] on their end step and then untap and try to win the game on my next turn if my opponent didn’t do anything too crazy during their turn. Unfortunately, I forgot that the [[Defense Grid]] would make my spells cost more on the opponent’s turn as well. 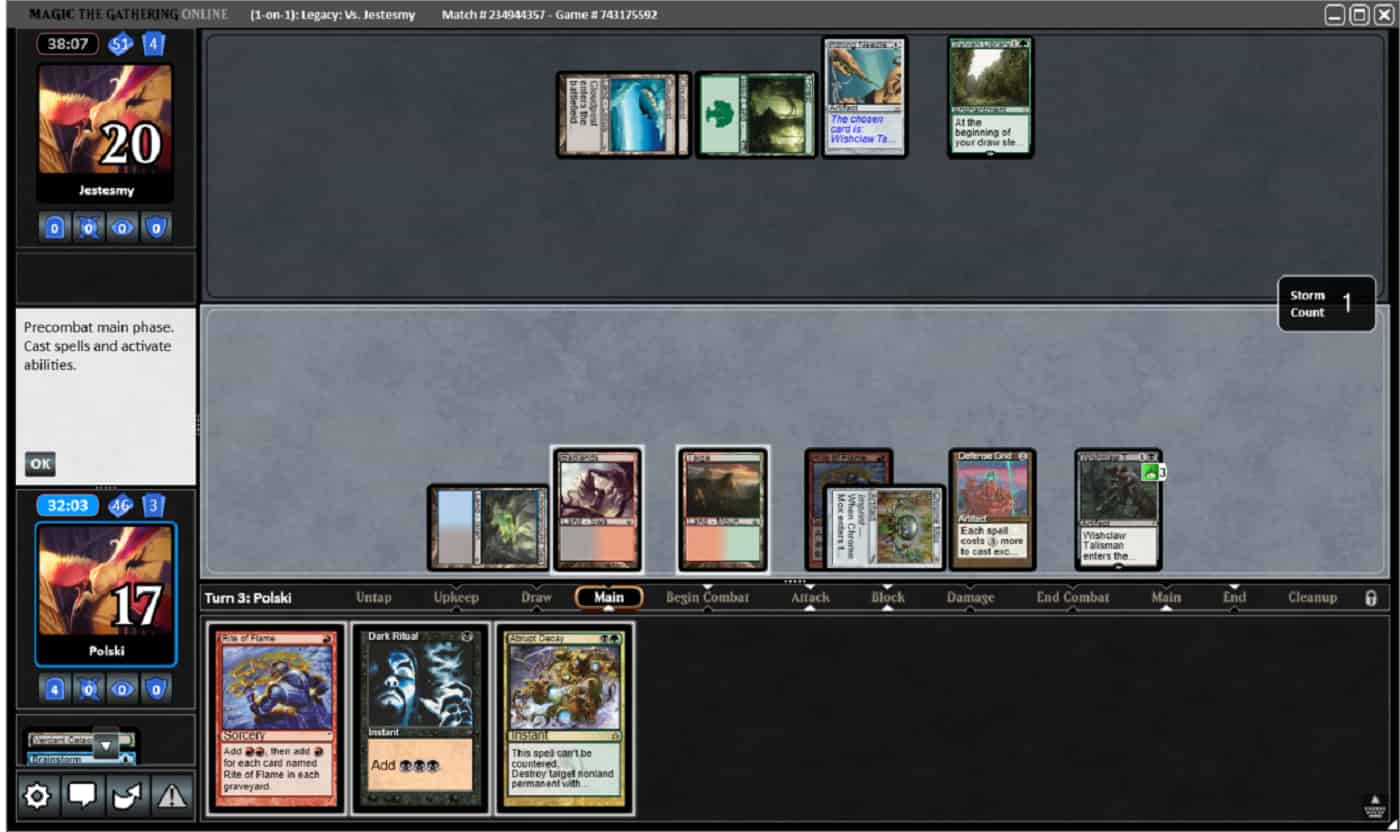 The opponent had a great fourth turn with a [[Crop Rotation]] for a third [[Cloudpost]] and then [[Primeval Titan]] for an [[Eye of Ugin]] and a [[Glimmerpost]]. On my next turn, I drew a land and immediately played. This would give me access to eight mana, the exact amount to [[Abrupt Decay]] the [[Pithing Needle]], activate the [[Wishclaw Talisman]] and cast [[Ad Nauseam]]. That was good enough to win the game. 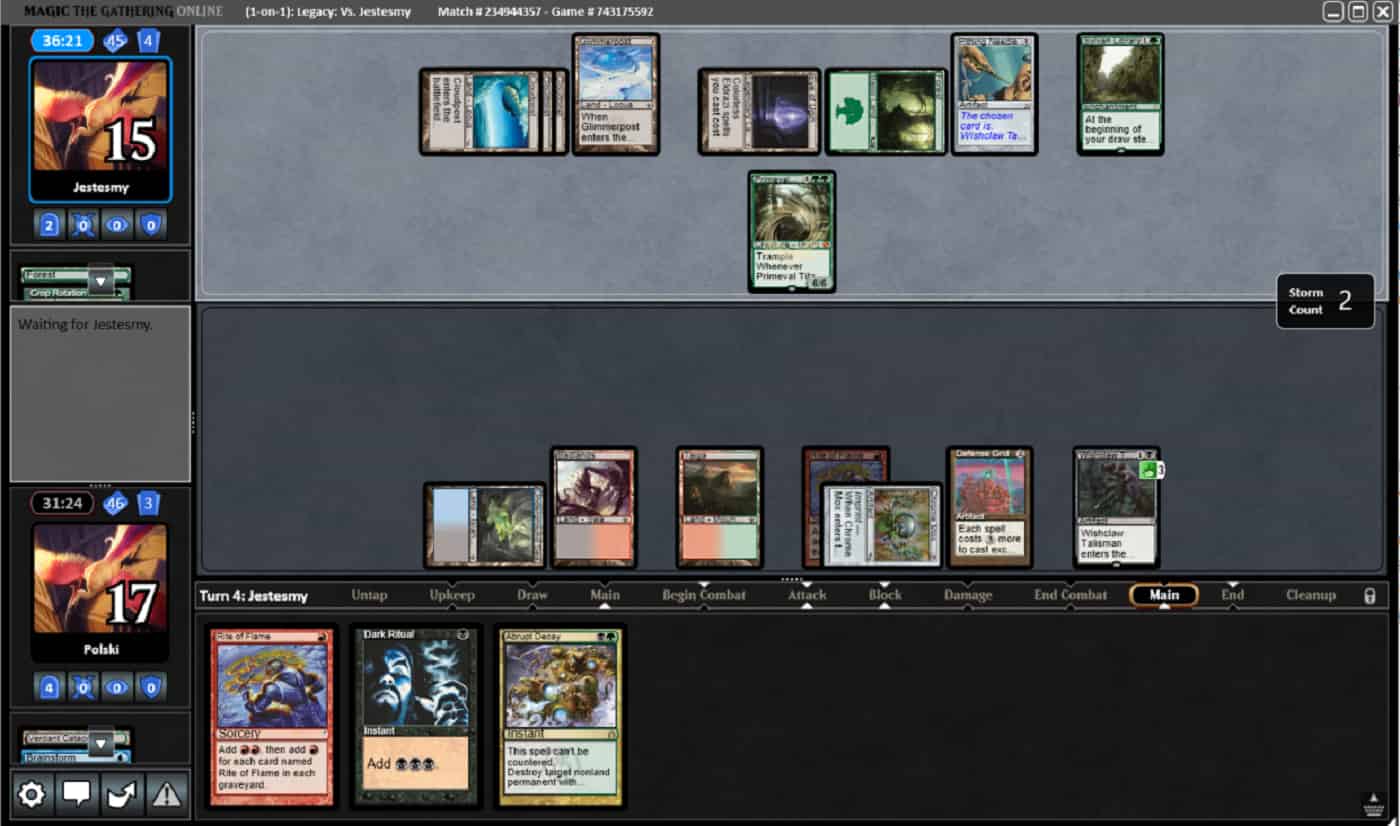 Mono-Green Cloudpost is a powerful deck, and we’ve seen it do well against control decks (e.g. Miracles) in the past. I think the addition of [[Elvish Reclaimer]] allows it to find multiple copies of [[Cloudpost]] even more consistently. I do think we are a heavy favorite in this matchup, but it’s still important to know our matchups inside and out and how to sideboard and play appropriately. I hope you got something out of this article, and I wish you the best of luck in your own testing.