Rainbow Depths is among the fastest and most straightforward versions of a [[Dark Depths]] deck by dedicating most of the deck to assembling the combo and protecting it. This makes executing the combo brutally effective, but there is no alternative game plan. The Rainbow part of Rainbow Depths is because the mana base is cards like [[Gemstone Mine]], [[Mana Confluence]], and [[City of Brass]]. The deck is so quick that the loss of life doesn’t matter too much and they just want to always have access to all of their colors of mana. A common strategy to fight Dark Depths has been to bring in [[Submerge]], but when there aren’t any [[Forest]]s in the deck then that becomes less effective.

How does Rainbow Depths matchup against TES?

[[Vampire Hexmage]], [[Dark Depths]], [[Thespian’s Stage]] – These three cards is what the entire deck is based around. Both [[Thespian’s Stage]] and [[Vampire Hexmage]] remove the counters from [[Dark Depths]] to create the [[Marit Lage Token]]. Because two of their three combo pieces are lands it can be tricky for us to interact. We can only interact with the token it makes. Their combo is pretty fast because it doesn’t take much mana to execute, but it does require an attack stop and [[Marit Lage Token]] doesn’t have haste, so we get an extra turn after they assemble their combo

[[Crop Rotation]], [[Sylvan Scrying]], [[Lotus Petal]] – Since Rainbow Depths is trying to assemble a specific combo they dedicate several cards like [[Sylvan Scrying]] and [[Crop Rotation]] to find the missing pieces. They also use [[Lotus Petal]] and [[Elvish Spirit Guide]] to accelerate the combo. This allows their deck to be pretty consistent and fast.

Having played this matchup a ton in the last few weeks, it is becoming one of my favorite matchups to play. Both decks have such explosive draws to end the game in the first couple turns as well as the ability to have lots of interaction for the opposing deck. There can be so much back and forth with [[Veil of Summer]] to protect from discard spells, [[Defense Grid]] to fight counterspells, and [[Chain of Vapor]] to remove [[Pithing Needle]] or a [[Marit Lage Token]]. If we don’t have the exact cards that lineup against Rainbow Depth’s cards, however, then their interaction is quite good at disrupting us, all while either player can win the game out of nowhere. It’s hard to pin point a key turn in the matchup or the proper way to approach every game because each game can be drastically different from the previous one. The way I like to think about the matchup is TES needs to be the aggressor. We are the faster combo deck, and we need to leverage that by not sideboarding in too many interactive cards or playing slow in fear of a counterspell. They are limited on the counters and mostly rely on [[Stifle]] which is easy enough to beat.

Rainbow depths plays up to eight discard spells. That’s pretty disruptive and really reduces the amount of cards we will have in our hand. Cards like [[Chrome Mox]] and [[Mox Opal]] require a high density of spells since [[Mox Opal]] requires two other artifacts to do anything and [[Chrome Mox]] requires removing a card. When our hand is being ripped apart, we don’t want to be left with cards we can’t use. Our only real way to interact with them is with the [[Marit Lage Token]] itself. We have two copies of [[Chain of Vapor]] to bounce their token and make them reassemble it. This is backbreaking for them as it will take them usually several more turns to make another token.

I began the first game on the draw and kept my opening seven-card hand which had plenty of mana, two copies of [[Wishclaw Talisman]] and a [[Brainstorm]]. My opponent led off with a [[Mana Confluence]] and passed the turn to me. 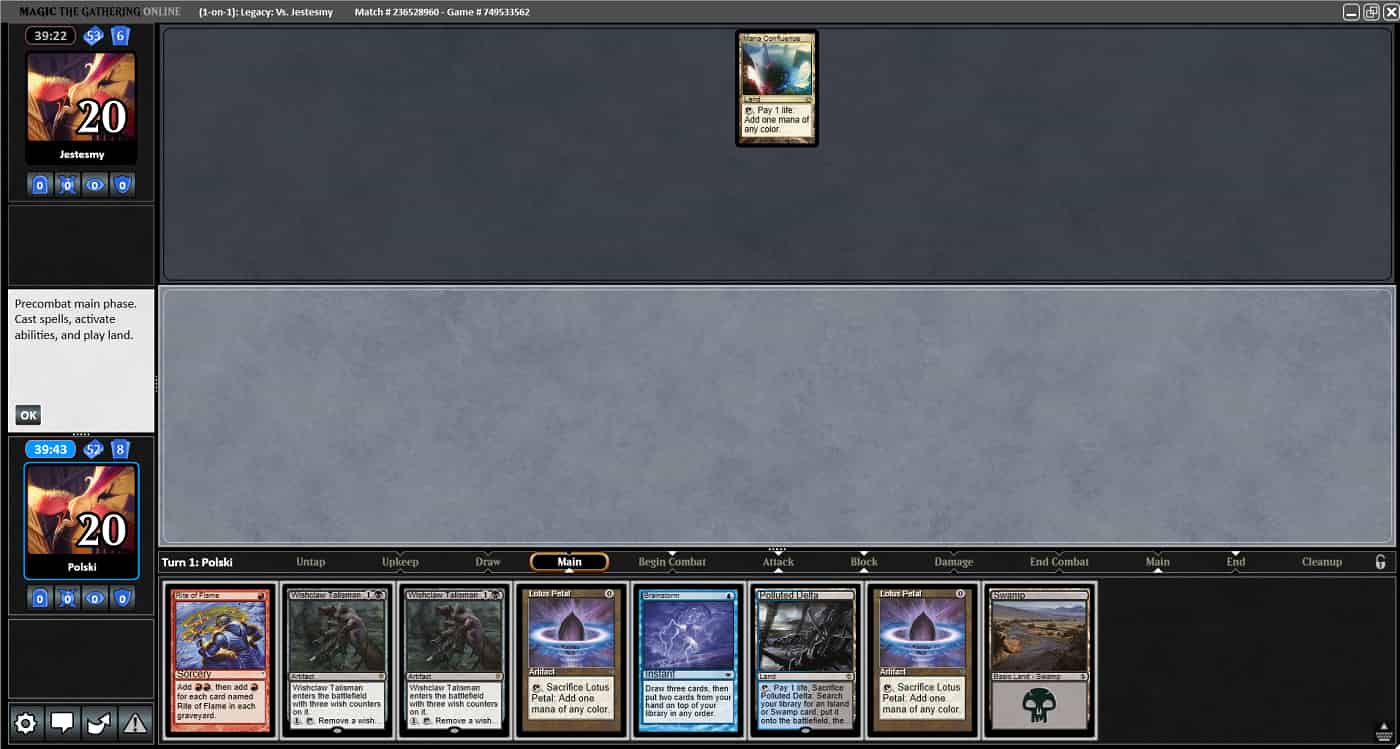 For my first turn, I decided to play a land and use the [[Lotus Petal]] to cast [[Wishclaw Talisman]]. This exposes it to a [[Pithing Needle]], but I wanted to use my mana this turn in case I needed to try to combo off on the second or third turn. At my end step, my opponent cast [[Crop Rotation]] for [[Dark Depths]], and then played [[Urborg, Tomb of Yawgmoth]] to cast [[Vampire Hexmage]]. That would allow them to remove the counters from [[Dark Depths]] and make a 20/20. I would have to win on my next turn. 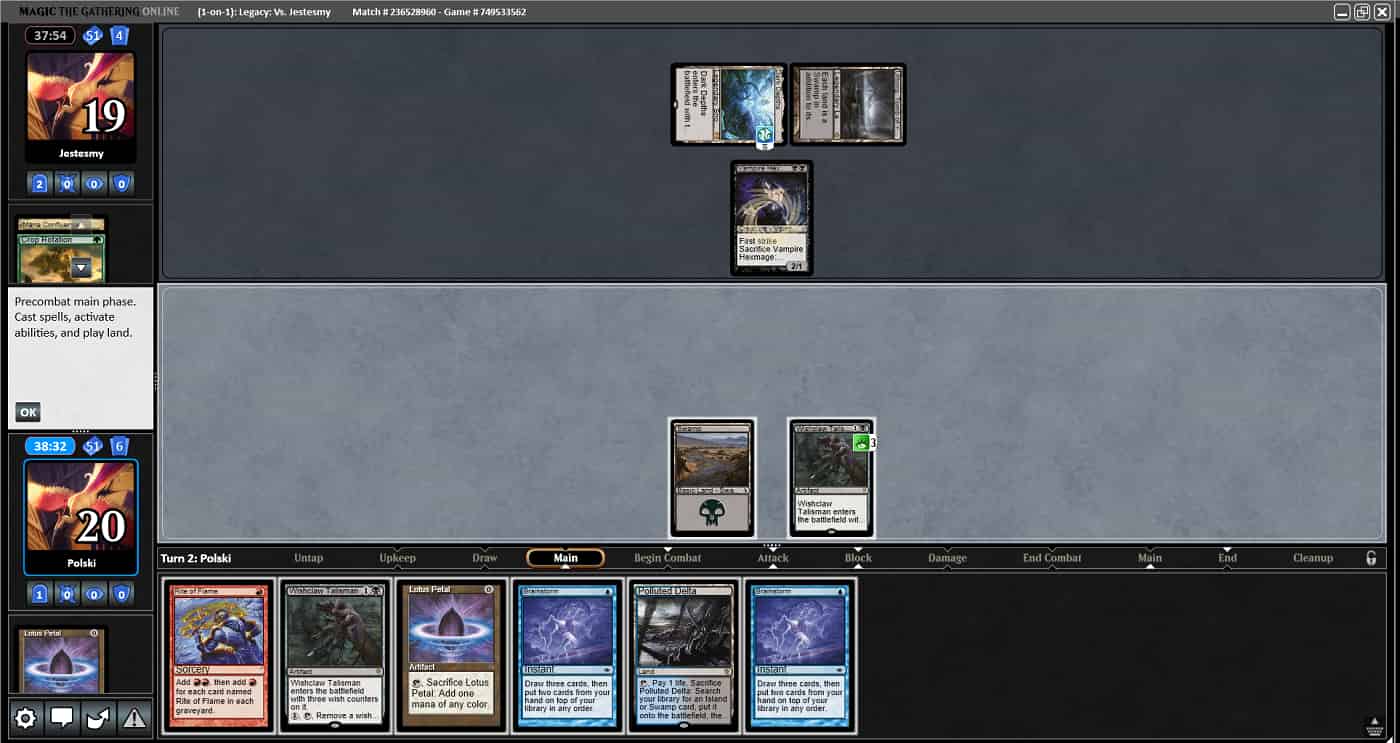 On my second turn, I had two options, I could use both copies of [[Wishclaw Talisman]] and search for both [[Lion’s Eye Diamond]] and [[Echo of Eons]] or cast [[Brainstorm]] and try to look for something better. I ultimately decided to go with my first option as I thought it would have the best chance of winning. I drew seven cards from [[Echo of Eons]] and it had lots of mana and a [[Brainstorm]]. I decided my best line was to float all of the mana from the artifacts and the two copies of [[Dark Ritual]] to cast [[Brainstorm]] and sacrifice [[Lion’s Eye Diamond]] in response. I was hoping to find any tutor effect or [[Tendrils of Agony]]. 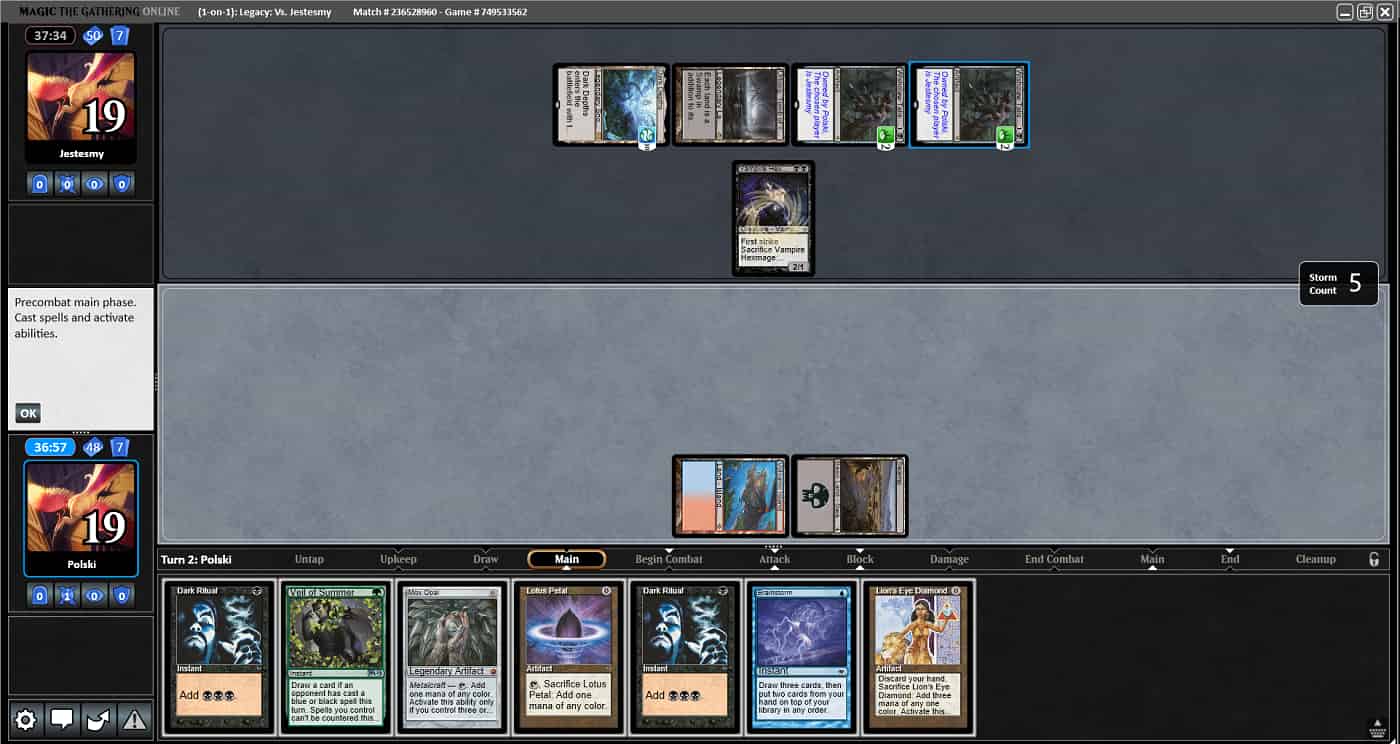 I drew [[Brainstorm]], and two copies of [[Lion’s Eye Diamond]]. I decided to float red with my previous [[Lion’s Eye Diamond]] in case I drew a [[Burning Wish]], but if I had floated blue mana, I would have gotten to look at three more cards. Instead, I just conceded the game because the opponent can attack for 20 on their next turn. 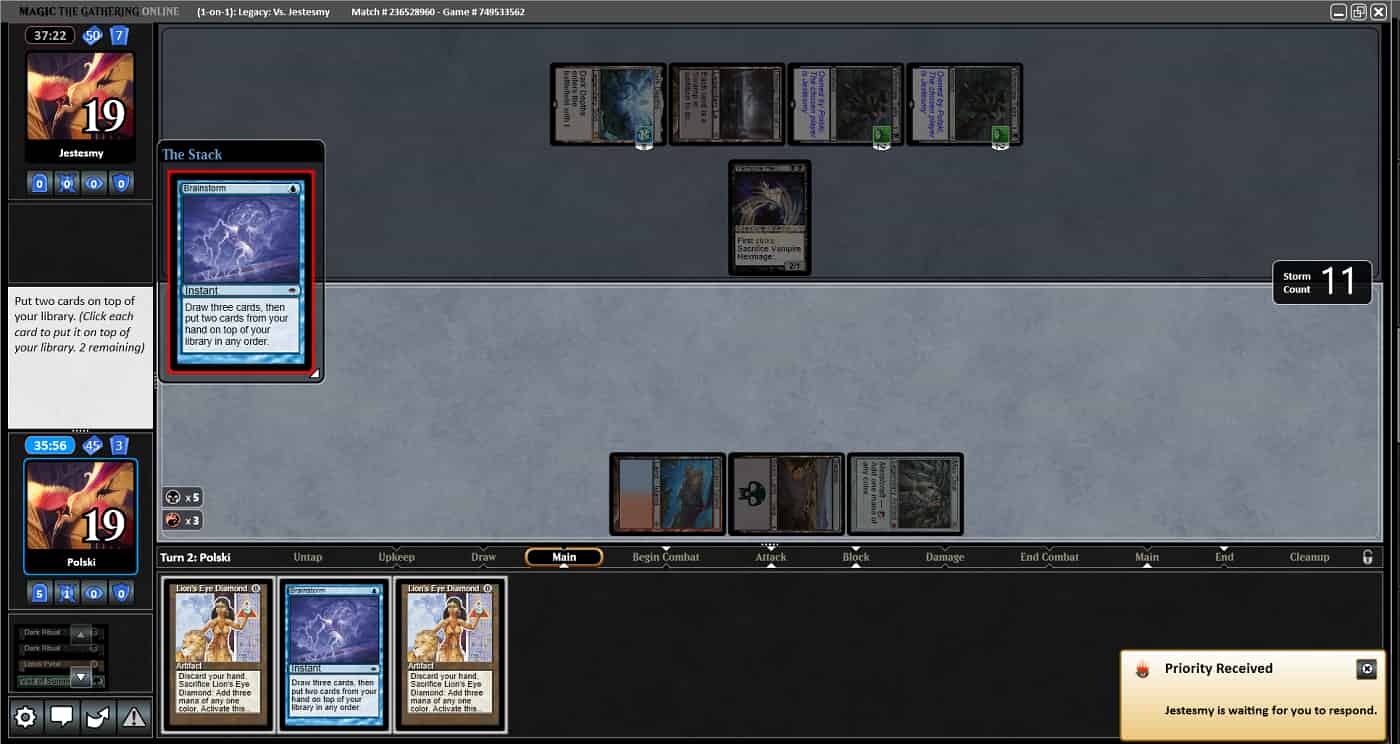 For the second game, I was on the play and kept my seven-card hand, but my opponent mulliganed down to five cards. I couldn’t combo on the first turn, so I cast [[Ponder]] to set up for the second turn. 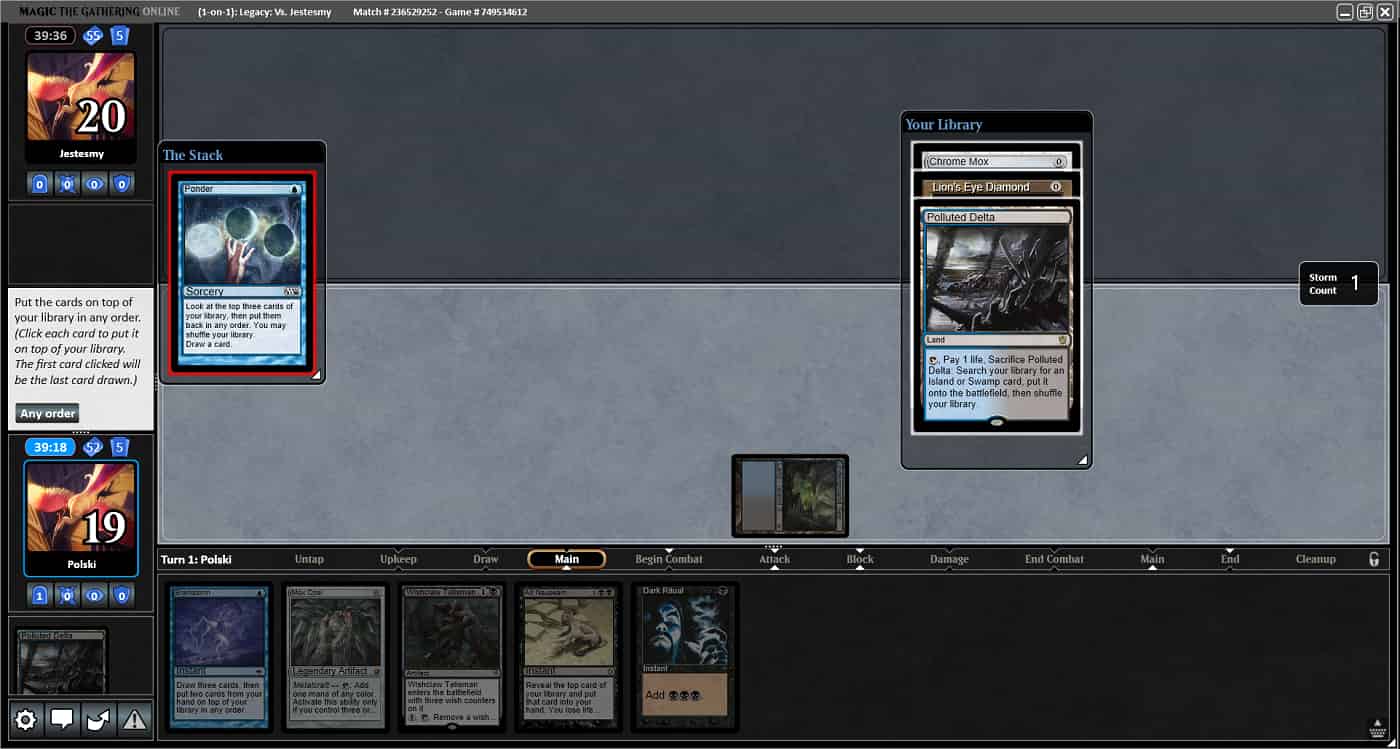 My opponent played a [[City of Brass]] for their first turned and passed the turn back to me. On my second turn, I drew [[Lion’s Eye Diamond]] and that would let me combo off this turn with [[Echo of Eons]]. I played my fetch land and immediately sacrificed it, but while it was on the stack it was countered by [[Stifle]]. Thankfully, I didn’t need that land to continue. I cast [[Dark Ritual]] and played out [[Lion’s Eye Diamond]], [[Wishclaw Talisman]], and [[Mox Opal]]. Before I used the [[Wishclaw Talisman]], I activated the [[Mox Opal]] while I still had Metalcraft. I then searched for [[Echo of Eons]] and sacrificed [[Lion’s Eye Diamond]] for three blue mana to put it into the graveyard and flash it back. 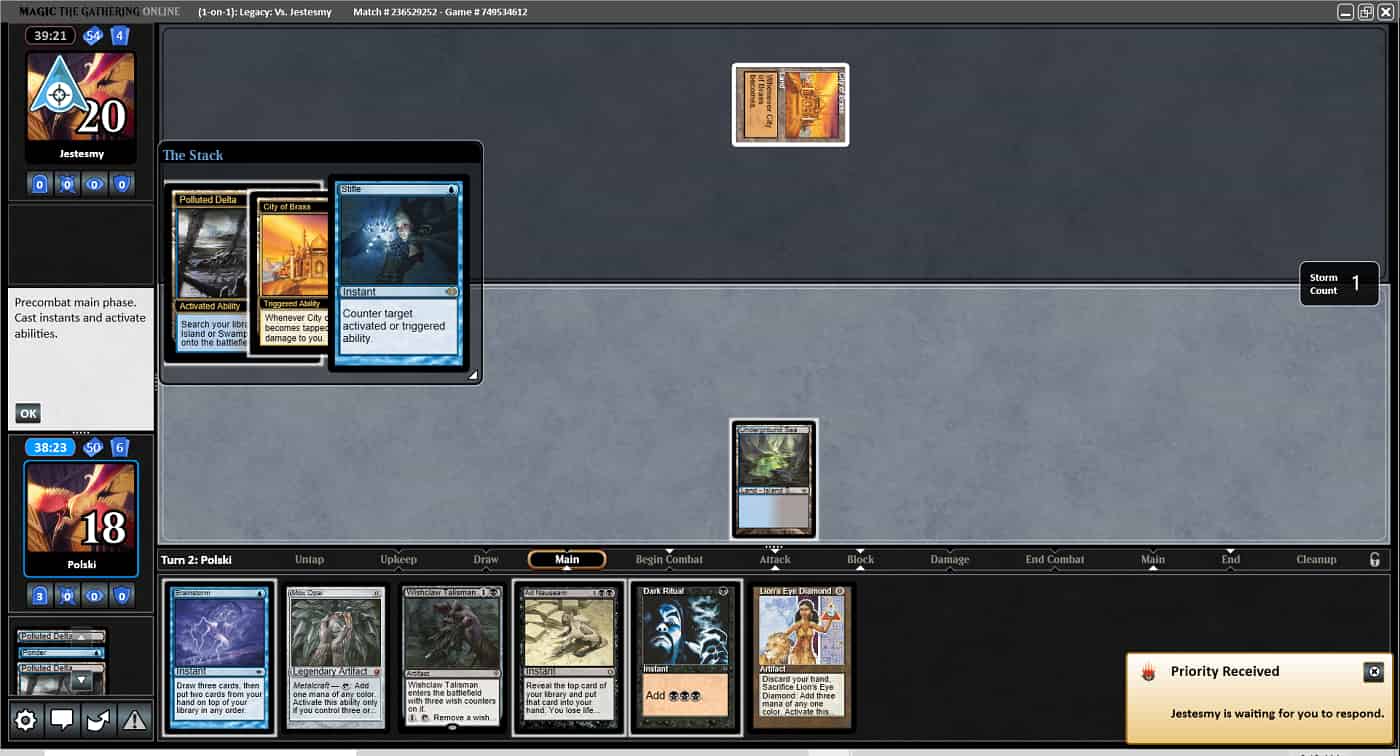 The seven cards I drew were pretty good, but not enough to continue this turn. I had to pass the turn back and hope to try and win on the following turn. 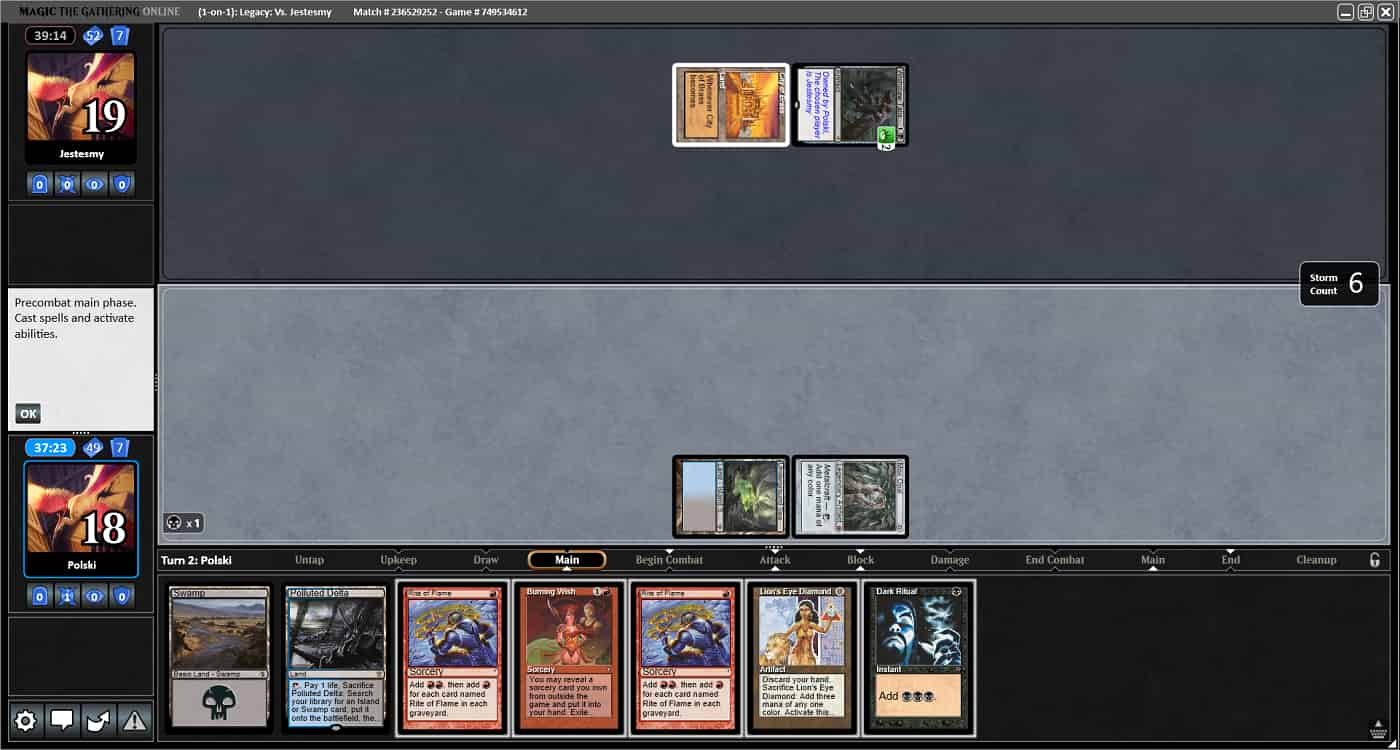 My opponent’s seven must not have been great either because they just cast two copies of [[Pithing Needle]] naming [[Wishclaw Talisman]] and [[Polluted Delta]]. 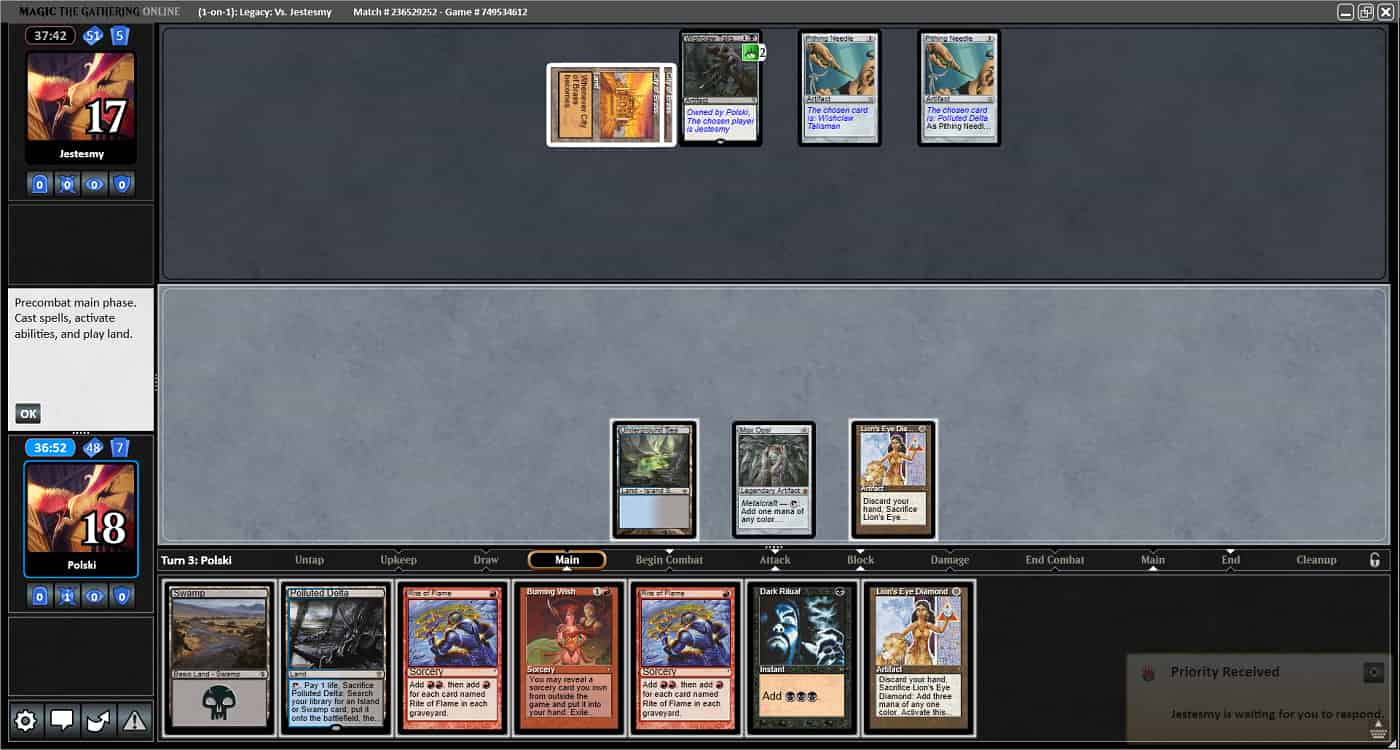 I had a [[Polluted Delta]] in my hand, but I didn’t need it to win. On my turn, I used all of my mana and cast [[Burning Wish]] for [[Peer into the Abyss]], and as usual it drew enough cards for me to win the game. 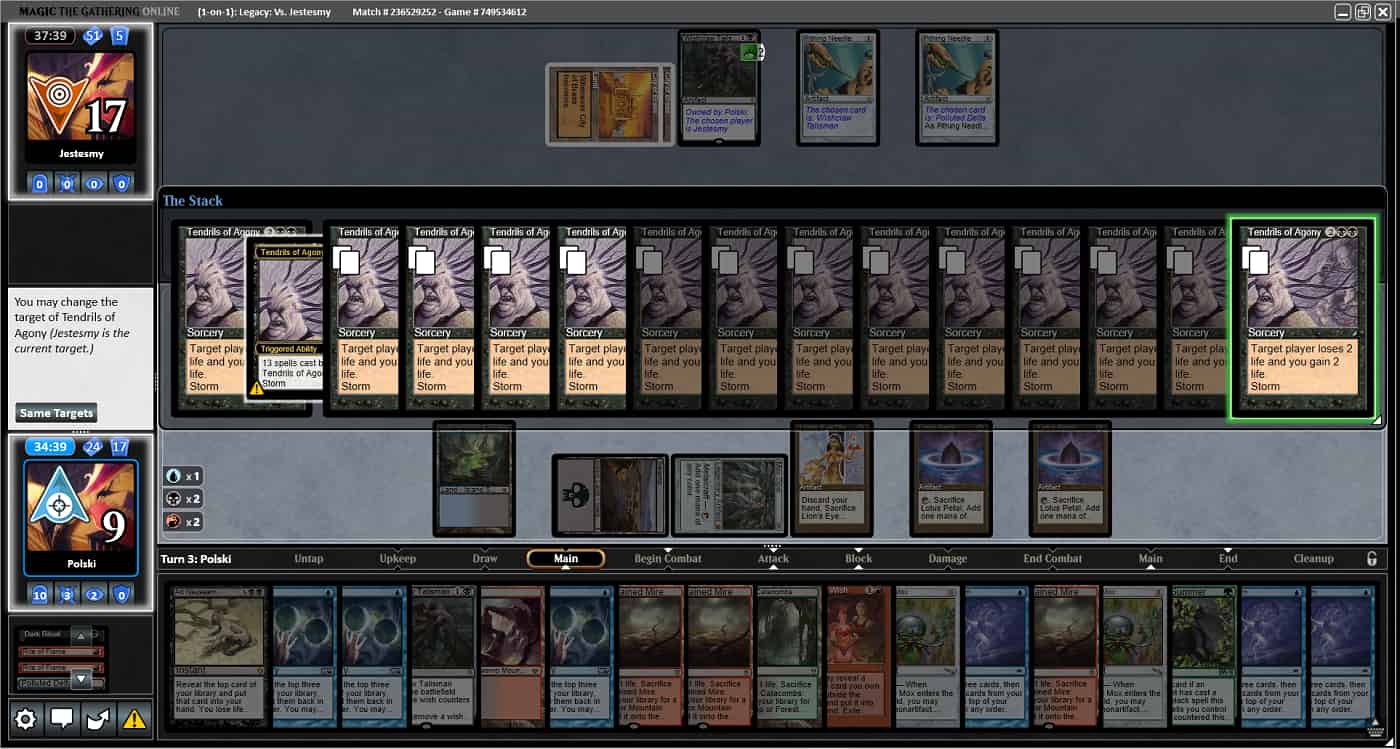 Unfortunately, I did lose the images for the third game, but at least the first two were good demonstrations of the back and forth between TES and Rainbow Depths. The first time I played against Rainbow Depths, I was confused about the mana base and didn’t understand it, but once I learned the reasoning behind having access to all of your colors and not caring about [[Submerge]], I thought it was really clever. That’s the innovation I love to see in Legacy. Overall, I think this matchup is extremely fun to play because both decks have explosive draws, but lots of ways to interact with each other post-board. I hope Legacy decks continue to evolve and innovate. I hope you enjoyed this article and good luck with your own testing!