With the recent banning of Gitaxian Probe and Deathrite Shaman people have been moving away from Grixis Delver for the more traditional version of RUG Delver. RUG Delver is a tempo deck that tries to use all of its resources to keep the opponent from gaining traction to set up their game plan, and then try to kill the opponent before they regain their balance. They do this by playing cards like Stifle and Wasteland to destroy lands, and cheap countermagic and removal to stop the opponent while putting on a fast clock. If you haven’t played legacy much the past couple years you may not have played against this deck, because of other Delver of Secrets decks being more popular, but this version of Delver is pretty different in how we approach the matchup compared to those other versions. It is important we adjust our deck and how we play to account for the banning, and people’s new deck choices if we want to be successful in this new meta.

How does RUG Delver matchup against TES?

Delver of Secrets, Nimble Mongoose – These are their primary creatures for applying pressure, and trying to end the game quickly. Delver of Secrets is a little better than Nimble Mongoose, because it usually gets to 3 power quicker. If their only clock is Nimble Mongoose it can give us a lot of turns to try and set up our combo and get our mana setup. One damage a turn is not very quick, so they will need to get Threshold or a second creature to have a meaningful clock.

Force of Will – One of the only hard counters that Temur plays and definitely a card we have to consider when making decisions. Force of Will is something we should all be familiar with playing against in legacy since lots of other decks also play it. Temur is no different, and we will often need a discard spell to try and win through it.

Stifle, Wasteland – This suite of disruption together hasn’t been too popular the last couple years, partially because of Deathrite Shaman, but for those of us that have been playing a while this isn’t new. Grixis and Sultai lists often don’t play both of these cards, but with RUG Delver back, it is time to prepare for this duo to return. Beating these cards is less about what cards we draw, but rather our skill in how we play them. Questions like “do I fetch to play around Stifle, but then they can Wasteland my duel” etc. are very tricky to navigate. The loss of Gitaxian Probe hurts us in this area, because we used to have full information knowing when to fetch, or is a dual land safe compared to having to get a basic. There aren’t any hard rules for this, but whenever they are tapped out if you can afford to fetch for a basic land then you should, because it plays around both of these cards. Also, note there are some hands where you can’t play around everything because of very few lands or color requirements, so knowing when you can afford to is a skill all in its own. Stifle plays two major roles against us, countering our fetch lands, but also countering the storm trigger on our win conditions. Just because you play around Stifle with our lands doesn’t mean we can ignore that card. We still need to answer it before we put a storm trigger on the stack.

Spell Pierce, Daze – Typically soft permission like these cards are not that good vs Storm because they can be played around quite easily with rituals or by taking a different line. Coming from RUG Delver though they are a little better than what they typically are, because of the land destruction aspect of the deck. When their goal is to choke you on mana then the value of soft permission skyrockets because it can be a lot harder to play around. Based on your land situation you may not even be able to afford to play around everything.

At the start of every game the most important thing is how we sequence our mana base. When do we use fetch lands vs when we play out mana producing lands from hand. If we crack a fetch land then can we afford to get a basic land, or which dual and when to expose our dual land to Wasteland etc. There are a lot of decisions that go into this phase of the game, and making the wrong one can cost you the ability to play spells. This just comes down to putting in reps and getting in practice to get a feel for it. Our best win condition here is Empty the Warrens. It’s the cheapest mana and fastest way to win the game. RUG Delver also plays zero answers to it main deck and often only 1-2 ways post-board, and there’s no guarantee they even bring it in after game 1. A naturally drawn Empty the Warrens is fairly hard for them to interact with since they don’t play many copies of Flusterstorm in their 75. Our only worry here is if they can race Empty the Warrens with cards like Delver of Secrets and Lightning Bolt, but if they only have like a Nimble Mongoose or Tarmogoyf then it’s hard for them to attack through a dozen tokens, so Empty the Warrens is great on boards like that.

As previously mentioned in the last section Empty the Warrens is the go-to win condition here. We don’t want to be cluttered with payoff cards, so we trim one of each of our tutors. Both tutors are really good here, but naturally drawing Empty the Warrens is usually better than having to cast it through a tutor because it being a lot harder to counter through just casting it from your hand. Having Empty the Warrens in your hand also requires two less mana to cast it since you don’t need to tutor for it. Our main deck is pretty well set up for these type of matches, so we don’t need a ton of sideboard cards for Delver of Secrets decks, but making this slight change will definitely help.

I am a couple turns into the first game, and I’ve cast a Thoughtseize on the previous turn, so my opponent has one unknown card. Unfortunately, my opponent has a pretty fast clock, so I need to make a move this turn or have a plan for the following turn. Here is the situation: 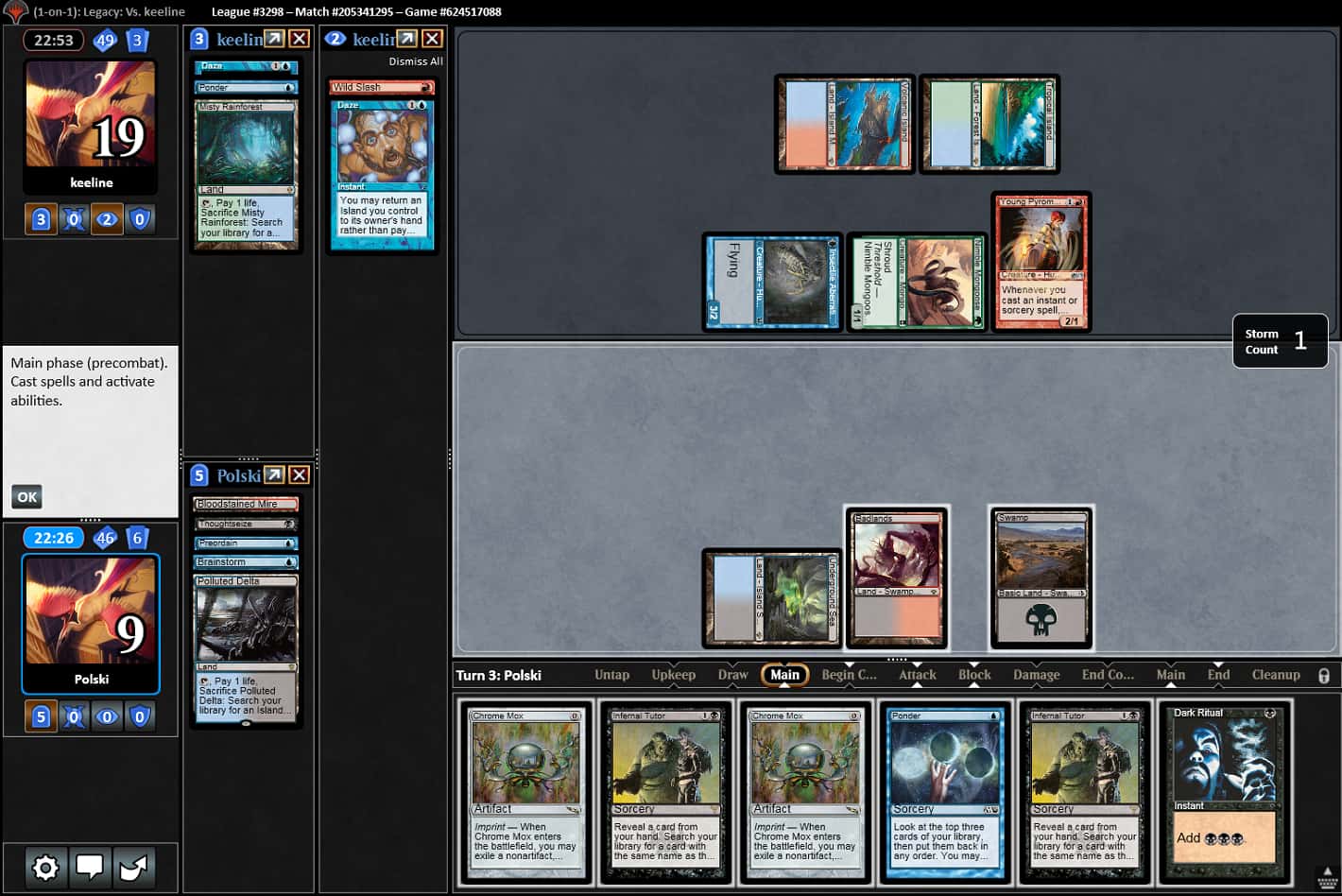 As it stands I can pass the turn but will go to one life, and with my opponent having a flier that pretty much shuts off Ad Nauseam and Empty the Warrens for the following turn. I can make 10 goblins now, but my opponent can Daze one copy, creating 8 goblins. I don’t really know what else to do here since passing will mean two unknown cards or a potential cantrip into a burn spell or counterspell to end the game. It might have been a mistake, but I did take the goblins route, and while my opponents’ unknown card was a blank it wasn’t enough to race his Delver of Secrets when my opponent drew a cantrip to make some tokens. If you think there was something better I can go or different line I should have taken definitely let me know!

I sideboard accordingly and draw my opening 7. 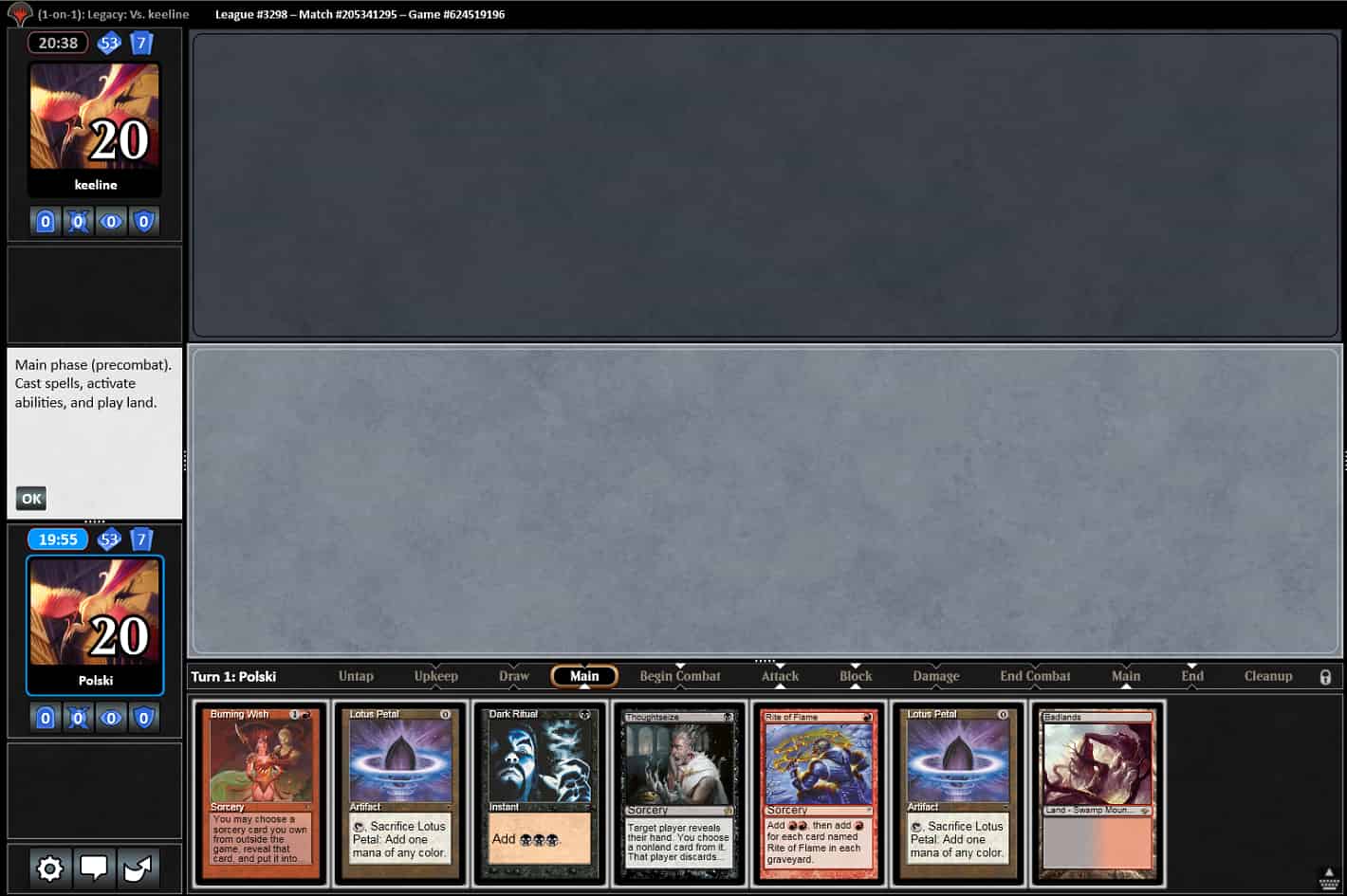 These are the hands I love to analyze, and I think where play style and personality really come into play. Another thing to consider with this hand that I used to make my decision is odds. What are the odds? I have a hand that lets me cast Empty the Warrens to make 12 goblins, and I get to keep the Thoughtseize in my hand to take a potential wrath on my second turn. The downside here is I lose to a Force of Will despite a Thoughtseize being in my hand. I end up going with this line, and the reason is that if I pass the turn I expose myself to even more than going for it this turn. Things like Daze, Flusterstorm, Spell Pierce, and Spell Snare are all possible off one land, and then if they have multiple then the Thoughtseize is just no good. I went for the Empty the Warrens and crossed my fingers. 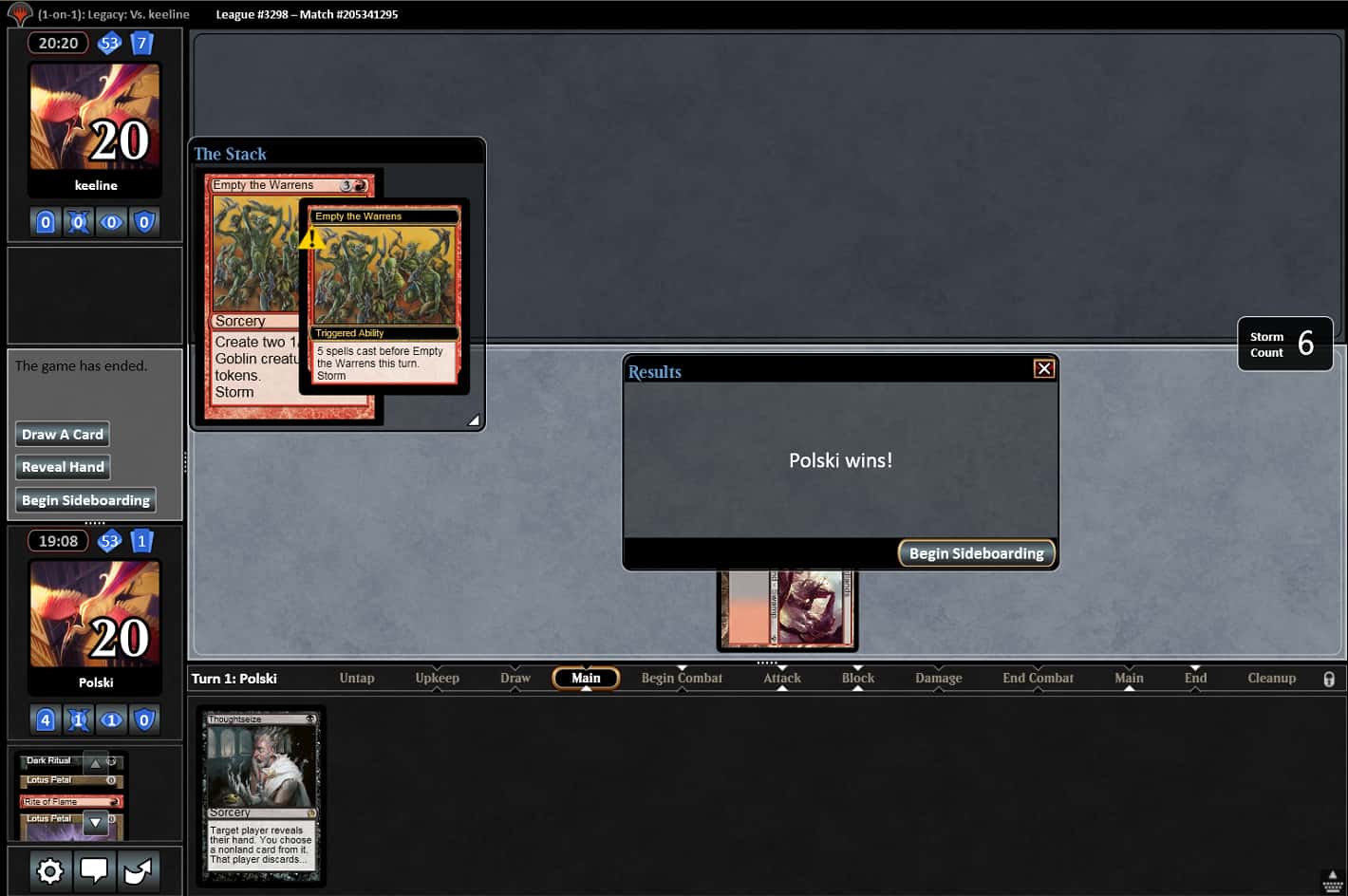 One thing to note here is that the opponent scooped immediately. This signals to me they may not have brought in a sweeper for game two. They might go reaching for their sideboard again to bring some in for game three, but still good to note.

Game three wasn’t too exciting. He played an early clock and my first two turns I cast two discard spells taking Force of Will and Spell Pierce. On his turn three, he drew another creature and played it going hellbent. On my turn three, I cast Ad Nauseam. It was good enough. 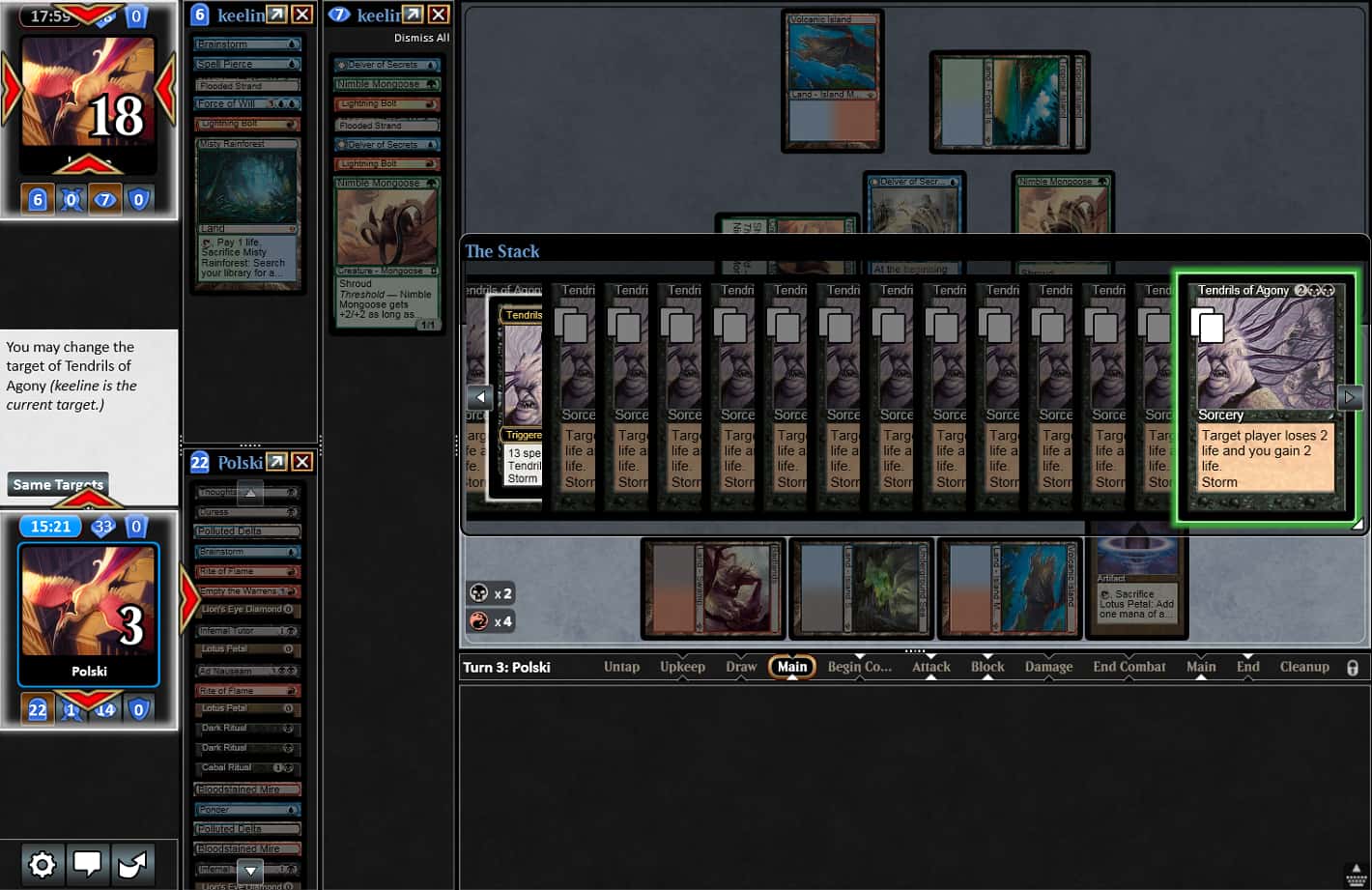 This match exemplifies many angles of this matchup and how we can’t play around everything. Sometimes you have to play your odds and go for it, and sometimes you can afford to play out a couple turns and clear the way. Knowing when to do this is often based on math and odds, but many times it’s based on experience and putting in reps to get a better feel of how the matchup plays out and our role in each game and individual turn. I certainly did not play perfectly, but I won the match and demonstrated how each decision factored into whether I won or lost.

The TES community is one I love for many reasons, but my favorite reason is that we can talk through plays and lines and it’s interesting to hear how other people play the deck and approach situations. As a community, we survived the banning of Gitaxian Probe and adjusted in just a couple weeks, because we all put our heads together and collaborated. There is still a lot of work to do and changes to be made. It will be interesting to see how the meta shifts over the upcoming months with these new changes, and how we storm players will adapt to these changes. Until next time, let’s keep the conversation going to make storm better than ever.