UW control decks have existed since the beginning of this game’s history, and have always been loved and hated by many. It’s been around all of these years since including in Legacy. UW Stoneblade is one of those control decks that combines powerful cards like Stoneforge Mystic, Jace, the Mind Sculptor, counterspells, and removal spells to disrupt what the opponent is trying to do and to end the game with an equipment or card advantage. As the format settles and midrange decks become popular, Stoneforge Mystic is a great place to be. Since these types of decks have been around forever and will continue to be a staple in the format going forward, understanding these matchups is crucial to our legacy success.

How does UW Stoneblade matchup against TES?

Stoneforge Mystic, Batterskull – These cards don’t sound that great against Storm decks, but the combination can cut off one of our main avenues of winning in Empty the Warrens. Sometimes you can make enough goblins or put the opponent to a low life total before Batterskull comes down and it can be good enough, but often I try to avoid Empty the Warrens in this matchup because of this package. We can use a discard spell to either take the Stoneforge Mystic or their Batterskull, but usually our discard has to take a counterspell in order to even combo off. Outside of stopping Empty the Warrens, Batterskull can be a decent clock at trying to win the game. A turn two Stoneforge Mystic backed by several counterspells could make it difficult to try to win. For more information on the goblin math to beat Batterskull, reference the data page.

Spell Pierce, Spell Snare – Outside of the hard counters, Force of Will and Force of Negation, UW Stoneblade also can play a variety of conditional counterspells such as Spell Pierce and Spell Snare. Spell Snare is an underrated card against us because it counters our two main cards in Burning Wish and Infernal Tutor. There are some hands, however, where it could counter nothing if we naturally draw an Empty the Warrens or Ad Nauseam. Spell Pierce will always be good against us. The best use of Spell Pierce tends to be against a cantrip, initial mana source, or a discard spell. Waiting until the combo turn is very risky because we could just have enough mana to pay the two as we are using all of the rituals and continue to make land drops.

Supreme Verdict, Engineered Explosives – UW Stoneblade can play a few different cards to wrath away any goblin tokens. A couple of options are Supreme Verdict and Engineered Explosives. Both of these cards could be in their sideboard, and it’s not a guarantee that the opponent will bring them in, but I always consider that possibility. There’s not really much we can do about it or to try to play around it even if we wanted to once we’ve made tokens. Sometimes a wrath can just be on the top of the opponents deck after we cast Empty the Warrens and we lose. It’s just another reason why I don’t lean on Empty the Warrens in this matchup.

Against UW Stoneblade, our game plan is very similar to that of playing against other control decks. That is to try and set up a win over the course of a couple of turns in order to beat counterspells. Beating counterspells could range from using discard spells, Defense Grid, extra mana to beat Spell Pierce, or a couple of tutors in case one gets countered. The main lesson I’ve learned over the years playing against Stoneblade is that there is no rush. Winning on turn three compared to turn five won’t make too much of a difference. They aren’t trying to assemble their own combo or lock pieces, so this isn’t a race. I also try to play to my odds. We don’t want to take that last point to the extreme and only go for the win when we have a 100 percent chance of winning. If I have an opening and the odds are 85 percent in my favor, then I’m going for it. For example, if I know the contents of my opponent’s hand except for one card and I can beat a vast majority of their top decks, then I’m going to try to win. I’m not going to wait to find another discard spell to see what their unknown card is. There’s certainly a balance here, but with some practice, you’ll find where that balance is for you.

In this matchup, the main thing that prevents us from comboing off is counterspells. UW Stoneblade has numerous counters in the main deck, and they will definitely be bringing in more from their sideboard. The good thing is that we have Hope of Ghirapur in our sideboard, which is perfect at beating counterspells. The opponent will have so many counterspells that one discard spell will usually not be enough, so we need more ways of beating them. What we cut from our deck is more interesting, however, because that decision isn’t as obvious. The post board games are going to slow down and be more interactive. We aren’t going to have the luxury of going for it on turn two or three and the opponent having no counterspells. Because the games will have more turns, we don’t need as many of our faster cards like Chrome Mox and Rite of Flame. The game just isn’t about racing.

I won the die roll, and chose to be on the play. I looked at my opening hand and immediately considered mulliganing because I had no lands, but then I saw my hand contained a turn one Empty the Warrens. The down side to this hand was that it loses to a Force of Will or Force of Negation. The upside was that it does beat a Stoneforge Mystic. This hand was either a go all in or a mulligan. I couldn’t slow play this hand in order to use a discard spell or anything like that. I chose to keep and just go for it. There’s probably six cards in their deck I lose to, the Force of Will or Force of Negation, but I’m alright with those odds. 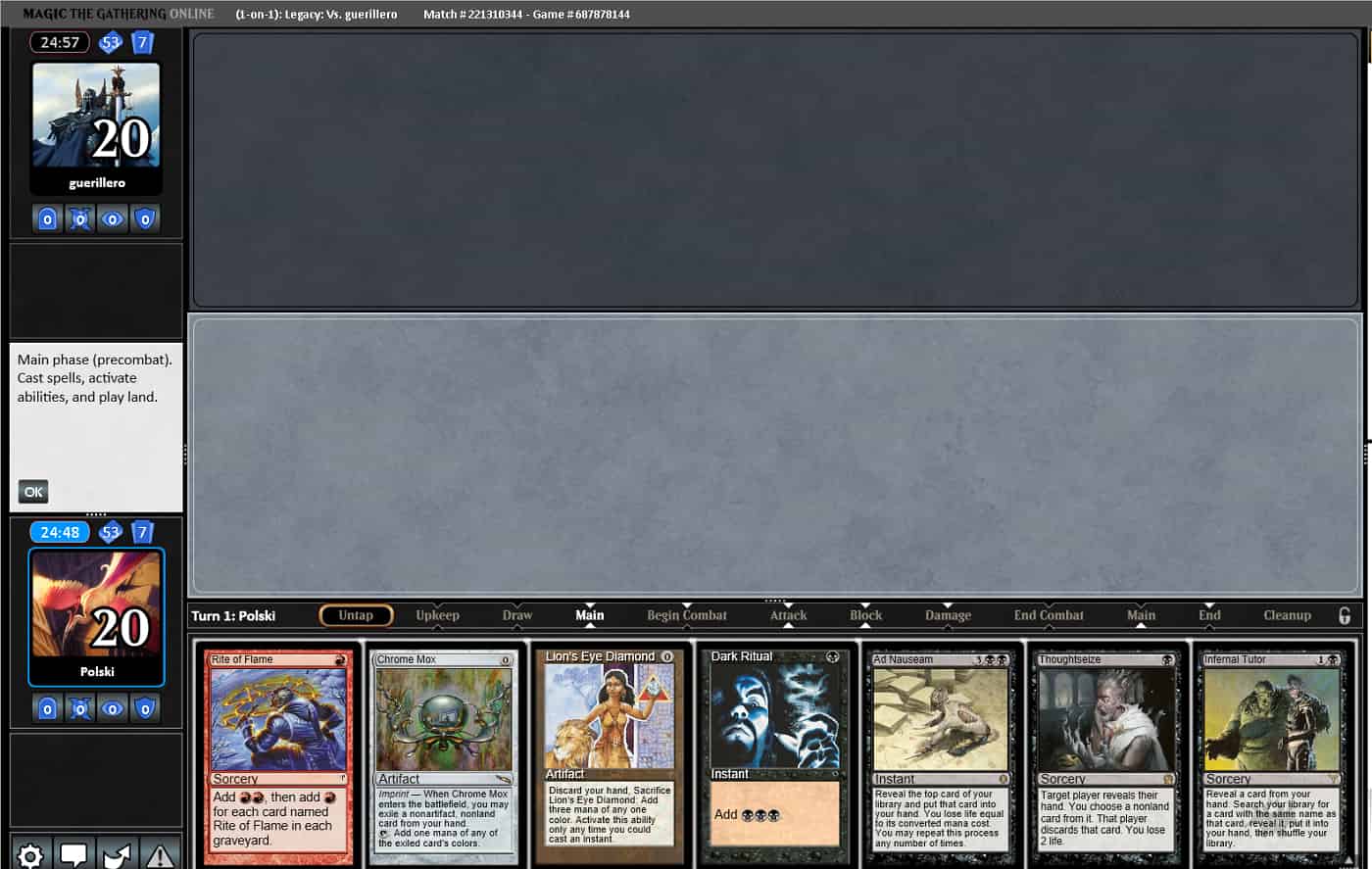 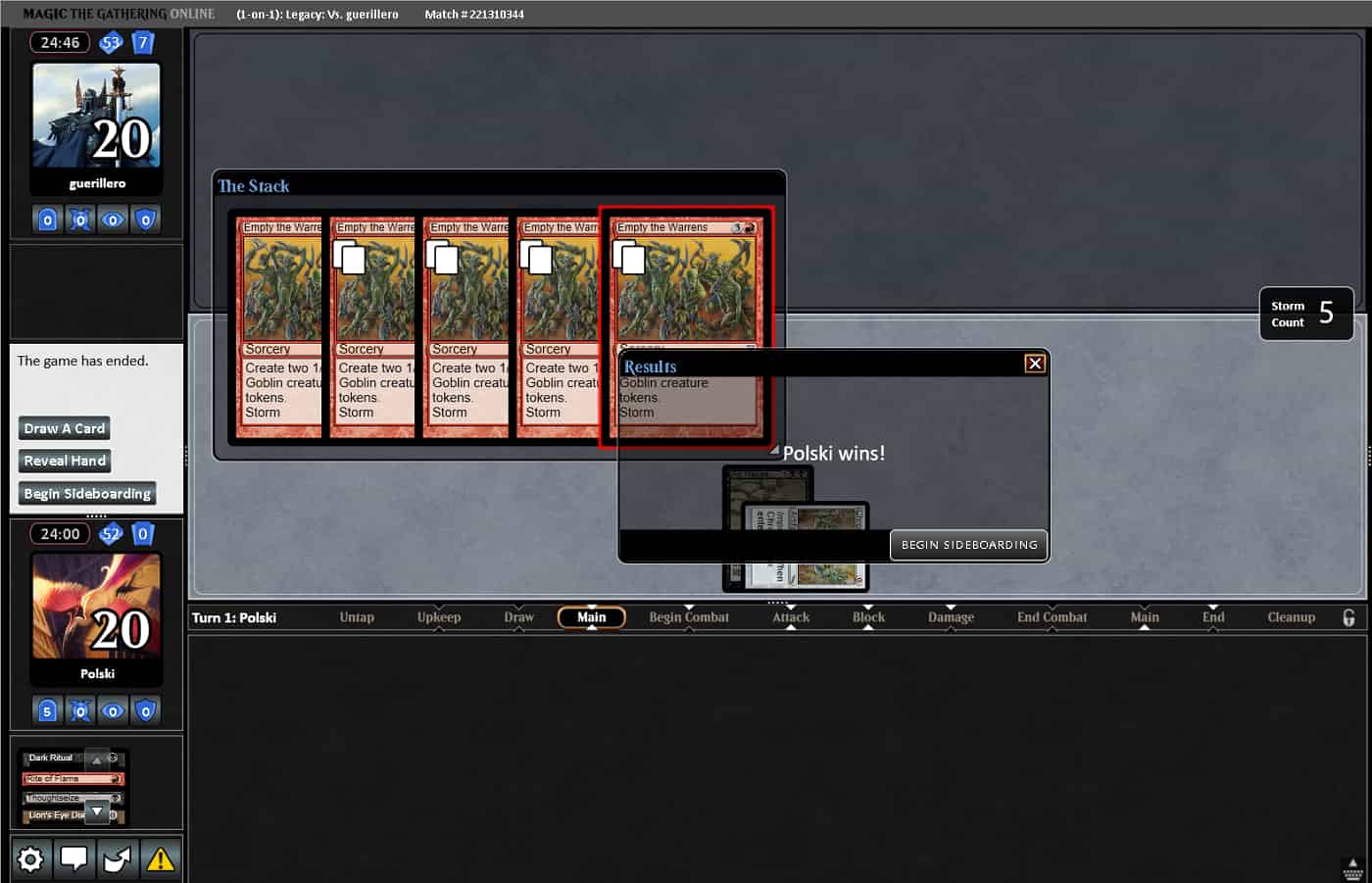 I sideboarded exactly as I mentioned previously, and was put on the draw. I had to take a mulligan, and then my opponent led off with a basic Island and passed the turn. I took my first turn and had a pretty good hand. 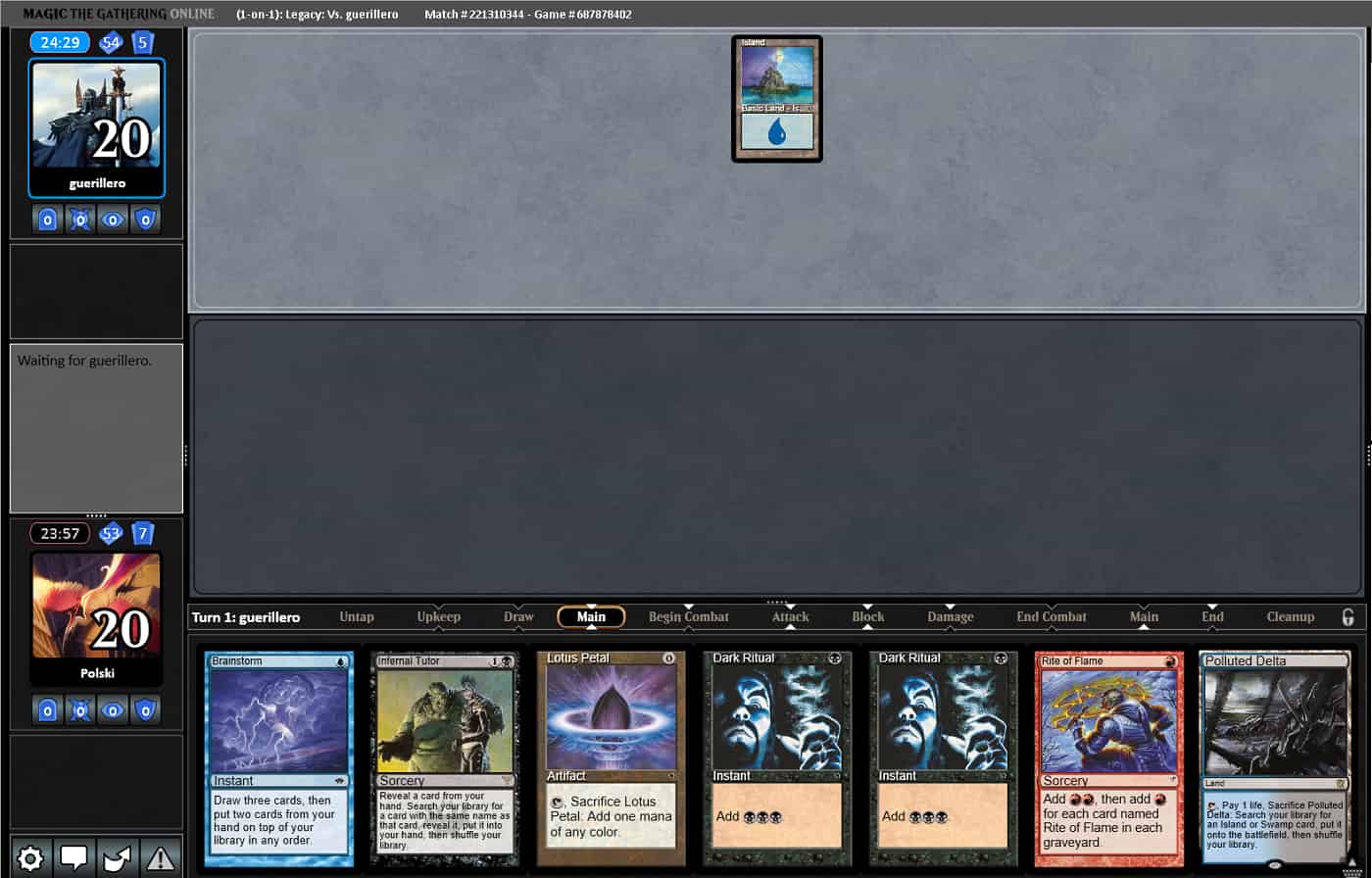 I just played a land and passed the turn back. There’s a very high chance my opponent had a counterspell in hand so I didn’t want to fire off this Brainstorm and look to try to combo off here. I think that’s just asking to get blown out by a counterspell. On my opponent’s second turn, they played a Tormod’s Crypt into a Stoneforge Mystic for a Batterskull. 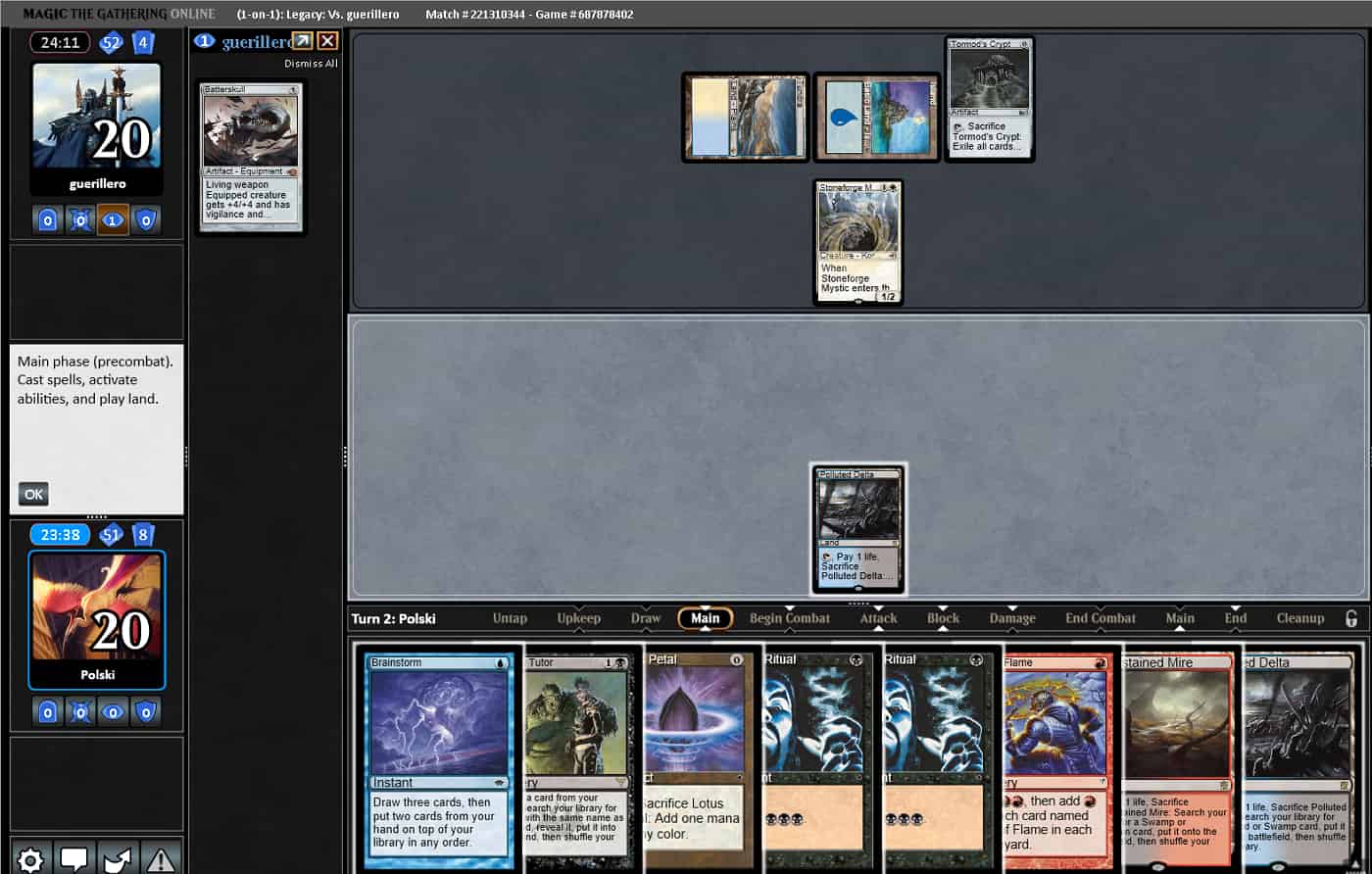 While my opponent was tapped ou,t I decided to use my Brainstorm. I really wanted it to resolve to sculpt my hand to try to find discard spells and a way to win quickly. Once it resolved, I cast a Ponder and the top three cards were Thoughtseize, Empty the Warrens, and Burning Wish. I left them in that order and drew the Thoughtseize. I’m not sure if that was correct or if I wanted the Empty the Warrens on the bottom. I figured I would combo off in two turns. Once Ponder resolved, I passed the turn back. 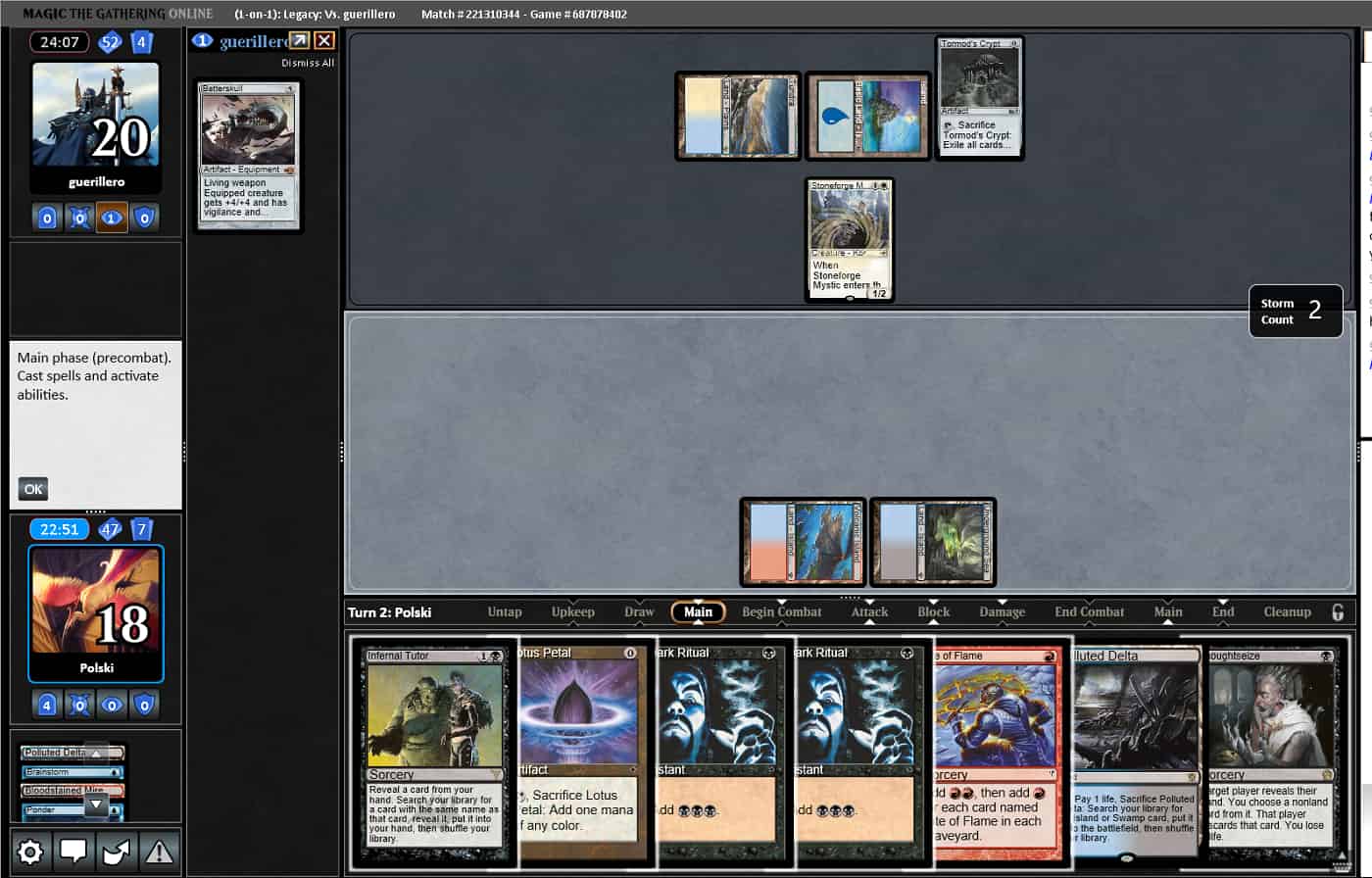 On my opponent’s next turn they just played a third land and passed back. Obviously, their plan is to leave up counterspells and put the Batterskull into play at the end of my turn. I drew the Empty the Warrens and led off with the Thoughtseize. They cast Force of Will. This left my opponent with only two cards in hand, one being a Batterskull. This was the point I knew I’d rather have had the Burning Wish over the Empty the Warrens. Nothing I can really do now except to pass the turn back and try to win on the following turn. 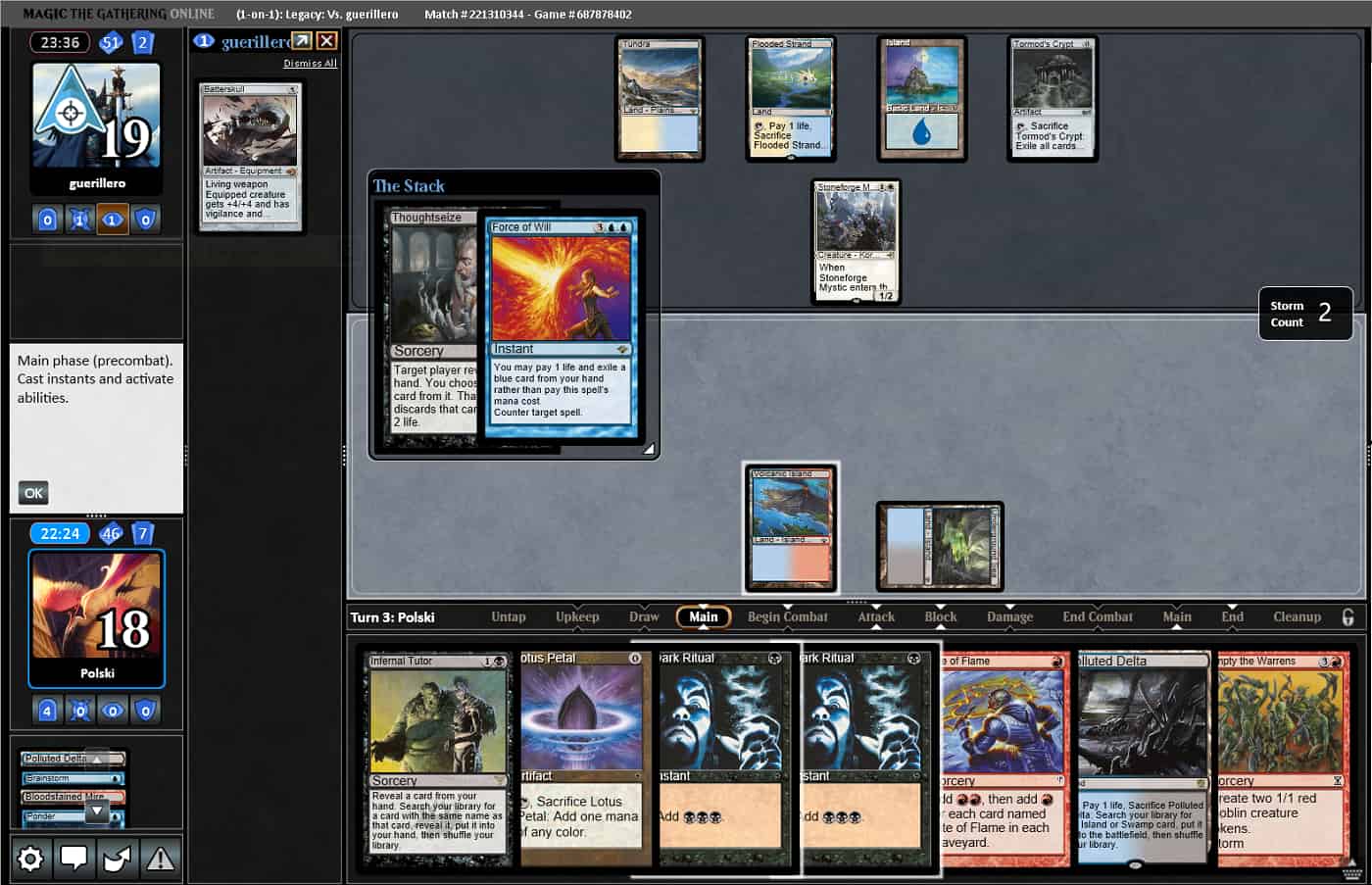 Thankfully, they just drew a second Tormod’s Crypt and passed the turn back. I decided on my turn to just go for the combo right now. The plan was to Burning Wish for Pulverize and destroy all of their artifacts. With the black mana leftover, I wanted to cast both copies of Dark Ritual and then the Lotus Petal and Rite of Flame for Empty the Warrens. It wasn’t until I put the Pulverize on the stack that I realized my opponent could pay three mana to return the Batterskull to their hand. It rarely comes up, especially against Storm, so I completely missed that line. By some miracle, my opponent also missed that line and then once Empty the Warrens was on the stack my opponent conceded the game. 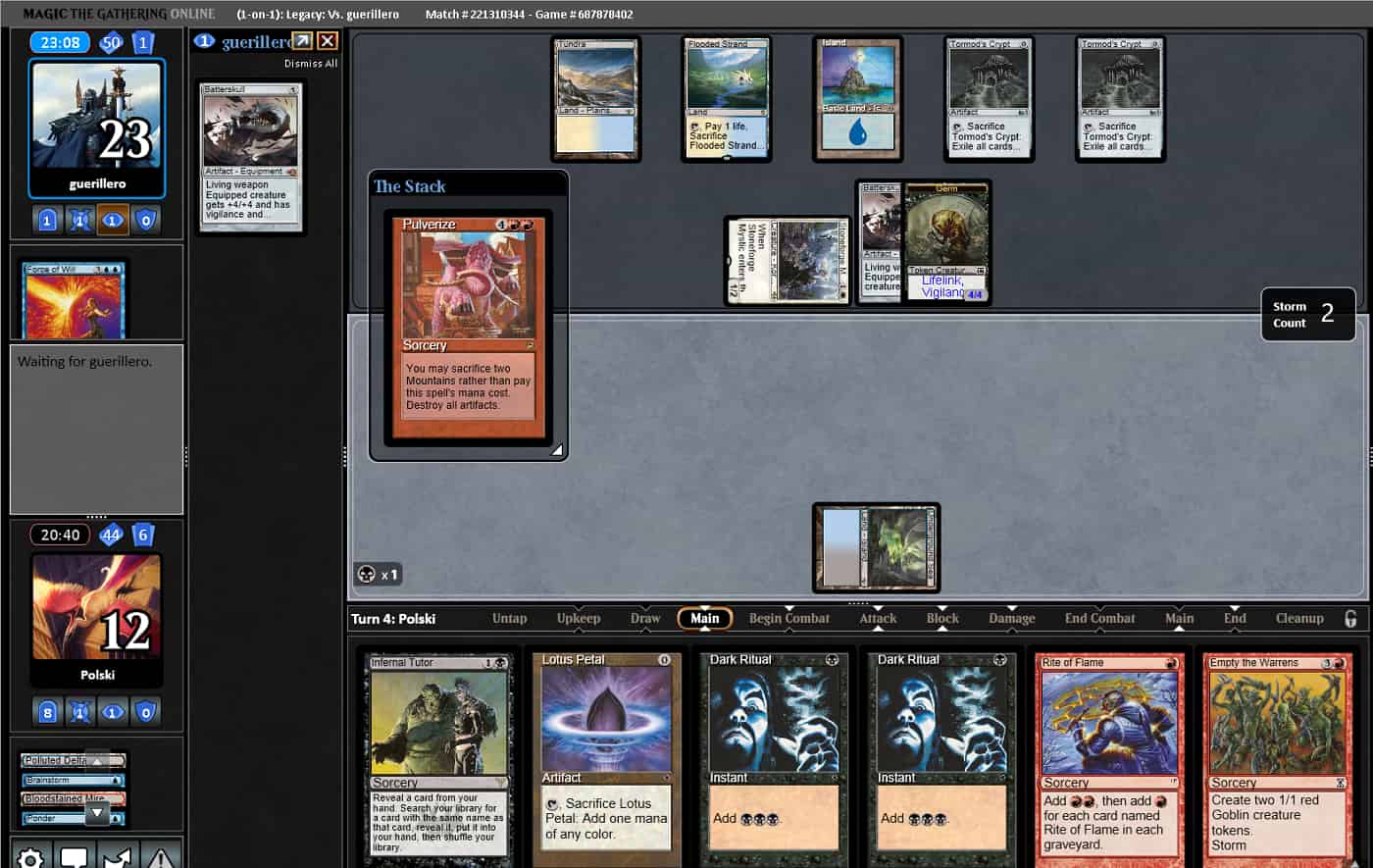 Even though I did win this match I don’t think I played the second game well at all. I definitely had tunnel vision on trying to win with Empty the Warrens since it was in my hand and I thought I had a way to beat the Batterskull. I easily could have taken a different route or set something up for a future turn because I was under no real pressure to combo off that turn. My opponent had very few resources and their board state wasn’t that impressive. With Storm, there are so many lines and options to take and I often miss one or don’t open up my mind to see them all. It’s one of the hardest parts of Storm decks and one of the reasons why some players may shy away from playing Storm. That’s my biggest takeaway from this matchup. I learned more about myself as a player, what my weaknesses can be, and how to improve my game. That’s the exact purpose of my personal playtesting, and I’m glad I got some value out of the match.

No matter what deck you play, why you’re playing or what you’re hoping to accomplish in Magic, I hope you are always learning and growing as a player. Until next time, I wish you the best of luck in your own testing!