Through the Looking Glass: BUG Ninjas with Matt Brown 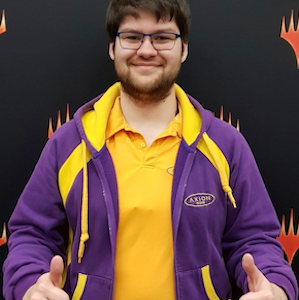 A few words on Matt Brown

Matt Brown is a competitive player based out of the United Kingdom. With two GP Top 8’s (in Legacy and Standard), he loves trying his hand in any format. Matt took Sneak & Show to a top 8 at GP Bologna 2019 (back when paper magic was a thing) and has recently been taking down MTGO leagues with a variety of ‘newer’ archetype decks.

How do you feel about BUG Ninjas in the current metagame? What are your thoughts about the matchup with The EPIC Storm?

I think that BUG Ninjas is reasonably well placed in the current metagame due to its ability to grind but also be adaptable to different matchups depending on what you expect to face. The matchup against the EPIC Storm can feel very different depending on how well equipped your sideboard is. If you are packing copies of [[Force of Negation]] and [[Thoughtseize]] to go with your maindeck disruption, then the matchup can swing in your favor quite heavily.

What sort of interaction do BUG Ninjas decks have before sideboarding? What should The EPIC Storm be on the lookout for?

Most BUG Ninjas lists will be relying on just a playset of [[Force of Will]] for countermagic and a few copies of[[Abrupt Decay]] and [[Oko, Thief of Crowns]] to deal with onboard artifacts. Don’t be surprised to see some lists with a couple of copies of [[Daze]] for additional countermagic or [[Brazen Borrower]] for onboard disruption.

How likely are you to keep a hand with your combo but without disruption and protection? Should we expect our opponent to have mulliganed for a [[Force of Will]] or [[Abrupt Decay]]?

In game one, the Ninjas player would be looking to keep any hand that has a fast way to enable their first Ninjitsu or be able to produce and early 4/4 with [[Retrofitter Foundry]] so they likely won’t be aggressively mulliganing to a [[Force of Will]] or [[Abrupt Decay]]. This changes after sideboard where Ninjas really need a cheap way to interact otherwise risk being dead through an early [[Veil of Summer]] + Combo draw. Don’t be surprised if they have a [[Force of Will]] effect in their hand post sideboarding as it isn’t uncommon to have three or four [[Force of Negation]] in their sideboard.

[[Empty the Warrens]] can be quite effective vs Ninjas as there are few ways to deal with 10+ [[Goblin Token]]s, and our answers will mostly be in the sideboard for game one. There are draws with multiple [[Ornithopter]]s, [[Retrofitter Foundry]]s, and Oko that would be able to deal with a medium-sized [[Empty the Warrens]]. If you can create enough [[Goblin Token]]s to win in one or two attacks, Ninjas will struggle to survive.

Some of the newer BUG Ninjas decks have moved their [[Plague Engineer]]s from their sideboard to the main deck. What has changed in the meta for this?

With the uptick of Elves and Goblins in the metagame due to the printing of [[Allosaurus Shepard]] and [[Muxus, Goblin Grandee]] along with minor applications in other matchups, there has been an uptick in both the amount of [[Plague Engineer]] in the 75 along with the Maindeck. This could mean that the [[Empty the Warrens]] plan gets a lot worse after game one.

The presence of [[Veil of Summer]] in The EPIC Storm affects how effective some of the disruption elements from Ninjas can be in the matchup. It means that you have to time your cards like [[Thoughtseize]] either when the Storm player has no open mana or just before you think they will be looking to Storm off. You would rather proactively trade your discard effect for [[Veil of Summer]] than try to [[Force of Will]] during their combo and get hit by a [[Veil of Summer]].

What other disruption pieces do you look at utilizing in this matchup? Are cards like [[Thoughtseize]], [[Abrupt Decay]], or even [[Veil of Summer]] in your list?

The most common disruption from BUG Ninjas will be 3-4 [[Thoughtseize]] from the sideboard and two-three [[Abrupt Decay]]/[[Assassin’s Trophy]] along with four [[Force of Will]] and 2-4 [[Force of Negation]] from the sideboard. Depending on how the overall metagame looks at the time, don’t be overly surprised to see the Ninjas player with cards like [[Back to Basics]], [[Mindbreak Trap]], [[Veil of Summer]], or [[Flusterstorm]] floating around their sideboard.

How aggressively do you mulligan for a hand that contains permanent based disruption?

In postboard games, you need to mulligan to either a hand with a fast clock or a hand with good disruption because you can’t afford to give The EPIC Storm too much time to sculpt their hand. Ideally, you are looking for a hand with [[Ornithopter]] + [[Retrofitter Foundry]] or a turn-two Ninjitsu with disruption.

Take out the single target removal like [[Fatal Push]] and trim on some of the more expensive spells such as [[Ingenious Infiltrator]] or [[Oko, Thief of Crowns]] to bring in all the copies of [[Thoughtseize]] and [[Force of Negation]] I have access to.

How do you value cards such as [[Surgical Extraction]] or [[Grafdigger’s Cage]] against The EPIC Storm?

I don’t think you can afford to bring in these kinds of effects from the Ninja’s deck because a lot of your cards need to stay in your deck to allow for the powerful synergies that mean that Ninjas can keep up in every game. Removing the clock from your deck is almost as detrimental as removing your interaction or hand disruption.

How do you think The EPIC Storm matchup compares to other [[Dark Ritual]] combo decks such as [[Ad Nauseam]] Tendrils or [[Doomsday]]?

Don’t be afraid to mulligan a seven or a six to find a better hand. In the matchup against The EPIC Storm, you need to rely on the quality of your cards/synergies rather than the quantities. Having only a single interaction spell and a slow clock is nowhere near enough for this matchup, and the inclusion of hand disruption in the deck means we have two avenues to attack.

Huge thank you to Matt Brown for joining Through the Looking Glass and providing some outstanding insights on the BUG Ninjas matchup with The EPIC Storm.