Through the Looking Glass: Hogaak with Kat Light 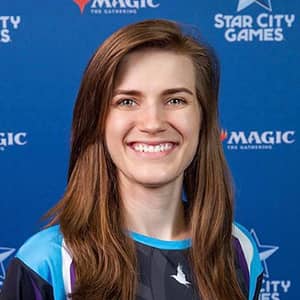 Nicknamed the Spirit Queen after piloting Bant Spirits to the finals of a Team Open in April 2018, Kat Light has become one of the most prominent names on the SCG Tour. In the last year, she has worked to expand her range to include Izzet Phoenix which took her to a Team Open Top 8 at SCG Pittsburgh and Legacy Hogaak which took her to an MCQ Top 4 at GP Atlanta. Kat also demonstrates a strong commitment to helping the magic community improve. In 2019, you can find her climbing the SCG Leaderboard and continuing to advocate for inclusion and positivity in Magic.

What are some of your thoughts on Hogaak’s place in the legacy metagame and its transition from a Modern deck to a Legacy deck?

Hogaak is a combo deck with a very strong beat down plan that is hard to disrupt for many main decks. The deck is extremely consistent, just like it was in Modern, but with better disruption in the card Cabal Therapy. It beats up on Delver decks and control decks and has decent disruption and combo plan against combo decks. The deck is very good and extremely fun to play.

What set of disruption do you play in the main deck that affects the Storm matchup?

Cabal Therapy in the main deck and Thoughtseize out of the sideboard.

Knowing you’re playing against The EPIC Storm, what are you most likely to name with Cabal Therapy turn one on the play?

Hogaak decks tend to build a decent board state pretty quickly. That said, how do you treat Empty the Warrens as a threat in the matchup?

Empty the Warrens is often not good enough because I’m pretty consistently able to put a significant amount of power into play on turn two and grind through Goblin Tokens. Empty the Warrens is good for buying time, but I wouldn’t rely on it to win the game.

How do you weigh in an aggressive creature based kill against the Altar of Dementia combo based kill?

It depends on the matchup and how my hand shapes up. Often times, putting a ton of power into play on turn two is enough against combo decks. I treat the combo kill as more of a back-up plan or a way to play through “Wraths.” It’s also essential in the mirror just like it was in Modern.

What do you prioritize the most in your opening hand when playing against Storm?

I just wanted to make sure that I can execute my own game plan. I don’t have to mulligan to discard spells because milling Cabal Therapy is often good enough. As long as the hand mills a decent amount of cards and puts a lot of power into play, I keep it. I definitely am looking to keep pieces that are likely to combo kill when casting cards like Careful Study, however.

How highly do you value your opening hand having a relatively fast clock? Would you keep a slower hand if it had a Cabal Therapy?

If the hand can Cabal Therapy twice without having to sacrifice an important creature like Hedron Crab, I am likely to keep it even if it is slower (especially post-board). TES, like most combo decks, dilutes slightly post-board, so it’s a little safer to keep slower hands with discard.

Traditionally, graveyard hate cards like Leyline of the Void have been pretty weak against TES. Would you say this has changed with the addition of Echo of Eons?

I did not board in Leyline of the Void against Bryant in the MCQ Top 8 because even with Echo of Eons. I think that significantly dilutes my deck in a matchup where I want to be streamline with some discard. Leyline of the Void is really only in the board for matchups like Reanimator that pretty often combo through turn one discard.

Do you find the TES matchup to play out any differently than the ANT matchup?

Yes, definitely! TES traditionally is able to utilize Ad Nauseam more effectively at a lower life total because the deck has a significantly lower curve, so the beat down plan against them isn’t nearly as effective at inhibiting them from comboing. Whereas versus ANT, getting them to a life total under 10 can significantly hamper their ability to leverage an Ad Nauseam line. ANT is also 1-1.5 turns slower, so I have more time to either beat down/set up a combo kill.

It’s typical of Storm to want to play out copies of artifacts like Lion’s Eye Diamond to play around discard. How does this affect your sideboard plan, if at all?

It doesn’t affect it at all. Bringing in cards to snipe artifacts like that would dilute my deck too much and often it just ends up being a dead card.

What does your overall sideboarding look like vs TES?

Some of the earlier Legacy Hogaak lists had some sideboard permanent hate cards such as Thalia, Guardian of Thraben. Do you find this plan to be viable with the presence of spell based combo decks in the format?

I personally found that I preferred discard spells that have an effect on turn one better than hate pieces that come down turn two. I think the plan is “viable”, but not one that I personally prefer because they end up playing out pretty “clunk-ily”.

I think Storm players are pretty favored in the matchup, so they need to keep hands that facilitate their own game plan versus keeping slow 7-card hands with a hate piece. I don’t think the hate pieces are as necessary because in reality we are both just goldfishing each other. I think if you have access to Veil of Summer, you definitely want it and would keep medium hands with it. In the matches that I’ve played, however, I’ve ever lost to a Storm player who prioritized disrupting me over executing their own game plan.

I would like to take a moment to thank Kat Light for joining Through the Looking Glass and providing some terrific responses on the Hogaak versus The EPIC Storm match-up.